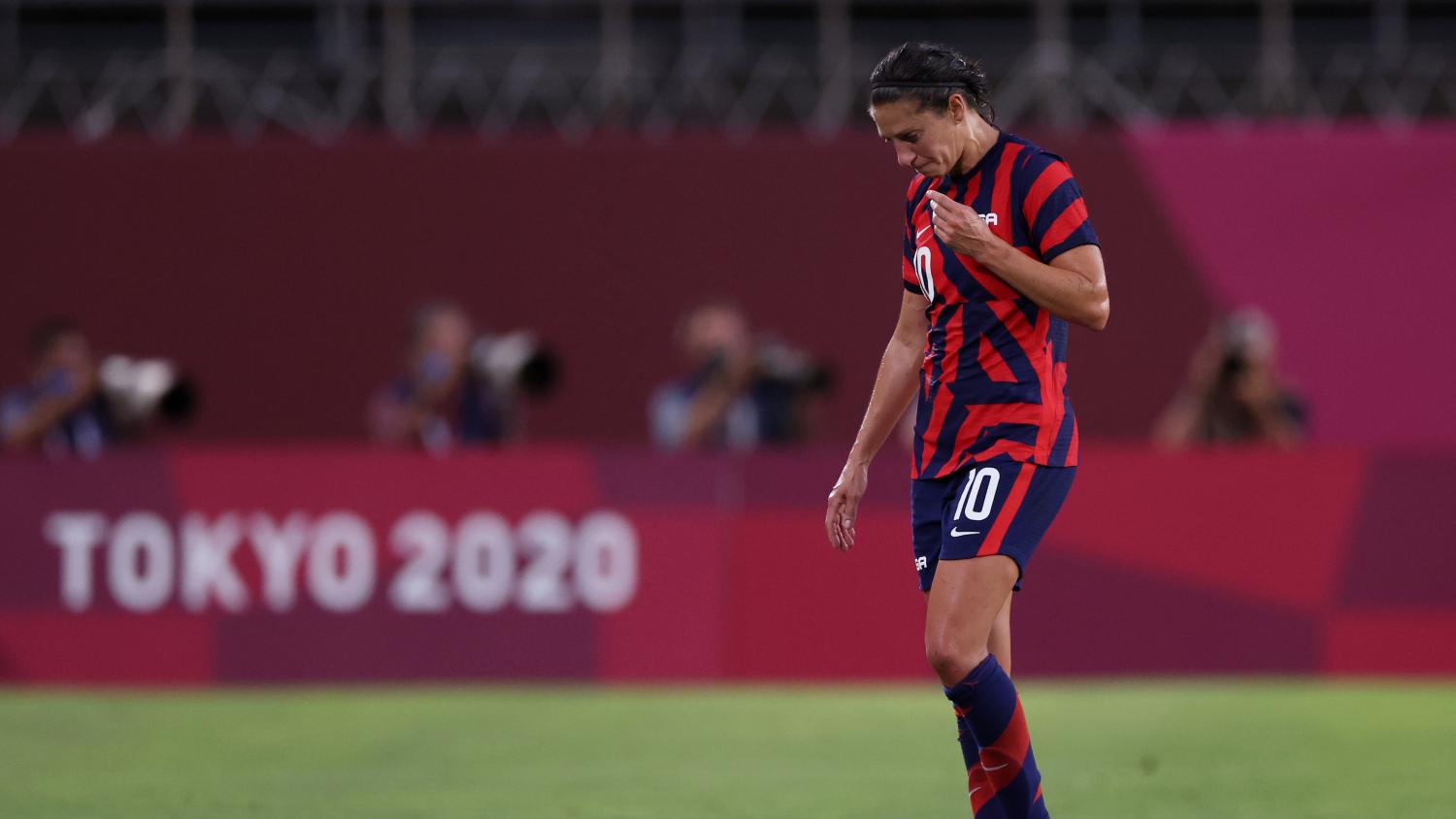 Carli Lloyd decided not to protest racism, and some Americans thought that was great.
Getty Images

I’m pretty used to getting hate mail these days. When you discuss human rights in relation to soccer, people get pretty upset and are not afraid to send anonymous emails spewing hatred toward me, which ironically proves my point more often than not.

I’ve never gotten as much hate mail as I have this week when I reported on Carli Lloyd refusing to join her teammates in kneeling to protest the ongoing racial inequalities in the U.S. and around the world.

I certainly struck a chord with readers on this topic; scores of faceless emails flooded my inbox calling me the vilest names in the English language. (I also received one positive email, so thanks, Sam.)

I’ve learned a lot from browsing all this hate mail (ain’t got time to read ‘em all, sorry). Here are my main takeaways.

I could not believe how many people emailed me thinking the USWNT was kneeling for the national anthem. No players took a knee during the national anthem at the Olympics (nor have they done so recently). I have no idea where people got this idea, but it speaks to a lack of reading comprehension or ability to parse information properly.

All USWNT players and staff took a knee before every game, often with the opposing team and referees, to once again raise awareness of systemic racism and white supremacy in the U.S. and abroad. The kneeling took place right before kickoff, in the same way Premier League players have done since last summer. The only time a player or staff member didn’t take a knee was before the bronze-medal match when Carli Lloyd decided to not join her teammates.

What a middle finger to black ppl like me that standing is... thank you for highlighting, @mollyhc

You’d think if people are going to take the time to come at me personally, they could at least figure out what they’re talking about first. I even saw people trashing Julie Ertz, as red-blooded, church-going an American there is, for kneeling for the anthem, which, again, she did not do at this tournament.

Even if these players did kneel for the national anthem, the suggestion that it’s somehow worse than the actual racism they’re protesting is to me the most baffling part of this whole issue. Imagine if your family had been persecuted, beaten and murdered for generations and you wanted to peacefully protest but onlookers said your protest was more harmful than what your family had gone through.

The only semi-valid point I found from all the emails was that Carli Lloyd hasn’t explained why she refused to kneel with her teammates. This is true. Lloyd has had multiple media engagements since the bronze-medal match but has yet to address the issue of not joining her teammates in peaceful protest.

In my opinion, it does not matter. The very act of standing and choosing not to protest against racism is itself a protest of anti-racist movements. Unless she clarifies one way or the other, how can we believe anything differently? “The only thing necessary for the triumph of evil is for good (wo)men to do nothing.”

The reasons for this seemed to vary. Some naively don’t believe racism still exists, others seem to think protesting racism is some sort of attack on their whiteness and still more somehow conclude incorrectly that being anti-racist is in itself racist.

Half of America didn’t bother to listen to Colin Kaepernick about why he knelt during the national anthem, they simply blasted him for being “disrespectful.” But when Carli Lloyd didn’t take a knee with her teammates without explanation, suddenly she’s a hero.

it pisses me off to no end to think that when carli lloyd does finally retire all we’ll hear about from us soccer and woso media are her stats & trophies.. when THIS is just as much a part of her LEGACY and probably has had a bigger impact on her teammates than anything else. foh pic.twitter.com/XE35tl7p0h

Megan Rapinoe and Carli Lloyd are two USWNT heroes on the pitch, both having won Women’s World Cup Golden Balls. But off the pitch, only one receives unbelievable hate from half of the country.

People love to hate Megan Rapinoe because she’s different: a gay woman with short, pink hair. What this same group of people really hates is when you attack Carli Lloyd, because that’s an attack on them personally.

Lloyd does not use her platform to support the fight for human rights; she does not take a knee to protest racism. Most of the hate mail I received was from people who support Lloyd simply because she is not anti-racist, which is an odd flex.

Lloyd attracts an interesting type of fan, I’ve noticed. They are the opposite of what women’s soccer represents.

Women’s soccer has long been on the vanguard for inclusivity in sports, whether it’s the LGBTQ+ community, supporting athletes of color or fighting the establishment for equal pay.

Lloyd’s fans, based on these emails, are afraid of the LGBTQ+ community, don’t think racism still exists and think the women are paid what they deserve. It’s almost like they want to be seen as supportive of women’s sports without actually supporting what women’s sports stand for.

Countless emails ridiculed the other USWNT players for being “sheep” for standing for human rights. If wanting the world to be a better, more equitable place for all is being a sheep, then I guess I’m a sheep too.

No, I am not the problem

A lot of people told me I was the racist one and that I am the problem with race in America. lol

I will admit I can always do better and would never assume I have all the answers. I think the U.S. would be a lot better off if everyone took this same view on race.

Admittedly, I’m not the right person to talk about racial inequalities in the U.S. As a white man I’m so incredibly privileged, and on some level, I can understand how huge portions of Americans don’t recognize the systemic white supremacy and racism prevalent in this country that sparked kneeling protests.

So instead, I’ll point you to a few better sources for racism in America. Start with the 1619 Project from the New York Times, which provides a superbly researched history of the U.S. Then read Ibram X. Kendi’s How To Be An Antiracist to learn what to do with that historical knowledge. Or, failing that, talk to people of color about their experiences.

White people in this country often struggle to cope with the idea they have benefited from a society that for generations has prejudiced against people of color, but until they come to terms with it, racism in this country will continue. And I’ll continue to get hate mail pointing out when people do not oppose racism.

Thanks to everyone for reading and taking the time to send me disturbing messages. It’s only going to serve to redouble my efforts to point out the racism that permeates our society, whether from a star footballer or Facebook troll.