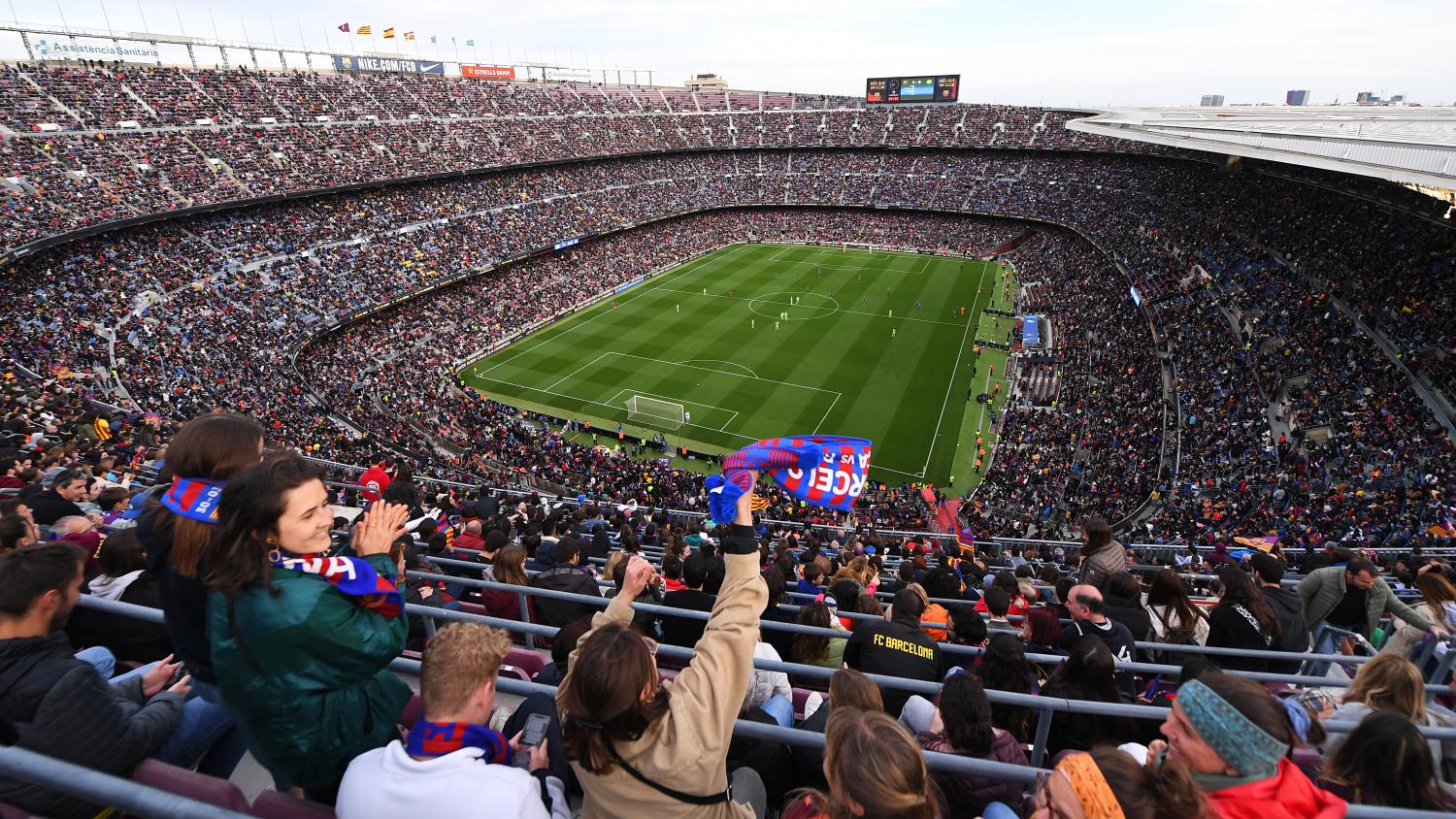 The record for largest attendance at a women’s soccer match stood for 23 years before it was broken at the Camp Nou in March. It took less than a month for the new record to fall, with the Barcelona women once again the impetus behind a massive crowd in the Women’s Champions League on Friday.

Wolfsburg advanced to the Women’s Champions League semifinals by taking out both Chelsea and Arsenal, England’s top two teams. But when it came time to visit reigning UWCL champion Barcelona in front of another huge crowd at Camp Nou, the German side was no match.

Barcelona ran rampant to secure a 5-1 win over Wolfsburg in the first leg of their Champions League semifinal on Friday in Barcelona. The second leg is slated for Volkswagen Arena in on Saturday, April 30.

For the second straight Women’s Champions League match, Barcelona set the world record for attendance at a women’s soccer match. After 91,553 saw Barça tear rival Real Madrid to shreds 5-2 on March 30, 91,648 attended the win over Wolfsburg. The March attendance broke a record that had stood since the 1999 Women’s World Cup final at the Rose Bowl in the U.S.

Ho hem tornat a fer, CULERS!
We did it again: The WORLDWIDE RECORD is ours!
¡Lo hemos hecho una vez más! pic.twitter.com/wHeMkSsYmN

The largest attendance at a Barcelona men’s match this season? A mere 86,422 for El Clásico in October. And these weren’t just fans filling seats on Friday, these were rowdy supporters creating another memorable atmosphere, the likes of which we haven’t seen at Camp Nou much for the men’s team lately.

The Barcelona players responded by putting on another display of offensive fireworks. Barça scored four first-half goals on the way to a commanding lead heading into the second leg.

It almost felt unfair at points, Barcelona too good and with too strong a backing. Wolfsburg will play at its men’s stadium for the return leg, but it will take a Herculean effort to overturn the 5-1 aggregate deficit.

For better or worse, Barcelona will not host the Women’s Champions League final at Camp Nou. Instead, the final will be played at Juventus’ Allianz Stadium in Turin, Italy, which holds just 41,507. The other semifinal pits French rivals PSG and Lyon against each other on Sunday and April 30.

Barcelona had never actually scored against Wolfsburg entering the match. That changed early and often on Friday.

Barça didn’t leave the adoring fans waiting long for the game’s opening goal. Aitana Bonmatí got in behind the Wolfsburg defense and finished with aplomb in the third minute, the second-fastest goal in the UWCL this season.

Caroline Graham Hansen doubled that lead in the 10th minute with some lovely composure in the box against the club for which she played for five years.

OH WHAT A FINISH BY @CarolineGrahamH

AGAINST HER FORMER CLUB

Jenni Hermoso finished off a fine team move that would make Pep Guardiola blush to make it 3-0 in the 33rd minute.

Alexia Putellas then took her turn to make it 4-0 before halftime, powering her shot past goalkeeper Almuth Schult then making sure the ball went in off the post.

Alexia Putellas gets in on the act. Barcelona are putting on a show

On her 25th birthday, Jill Roord managed to score a consolation for Wolfsburg. Initially ruled offside, the VAR confirmed the former Arsenal star held off her run just long enough, and it was 4-1 in the 70th minute.

The goal wasn’t undeserved as Wolfsburg was able to play its football at times. However, Barcelona continued to push forward at every opportunity, and only a couple of stellar saves from Schult on Asisat Oshoala kept the Nigerian off the scoresheet.

Eventually, Barcelona did find a fifth, via a spot kick from Putellas for her second of the night.

Barcelona has already clinched a third straight league title and will be eyeing a second straight treble with the Champions League and Copa del Reina still within reach.

Wolfsburg can only hope its own homefield advantage provides a similar spark on April 30.