What The Heck Is Northern Ireland? Answering All Your Questions About USMNT's Next Opponent 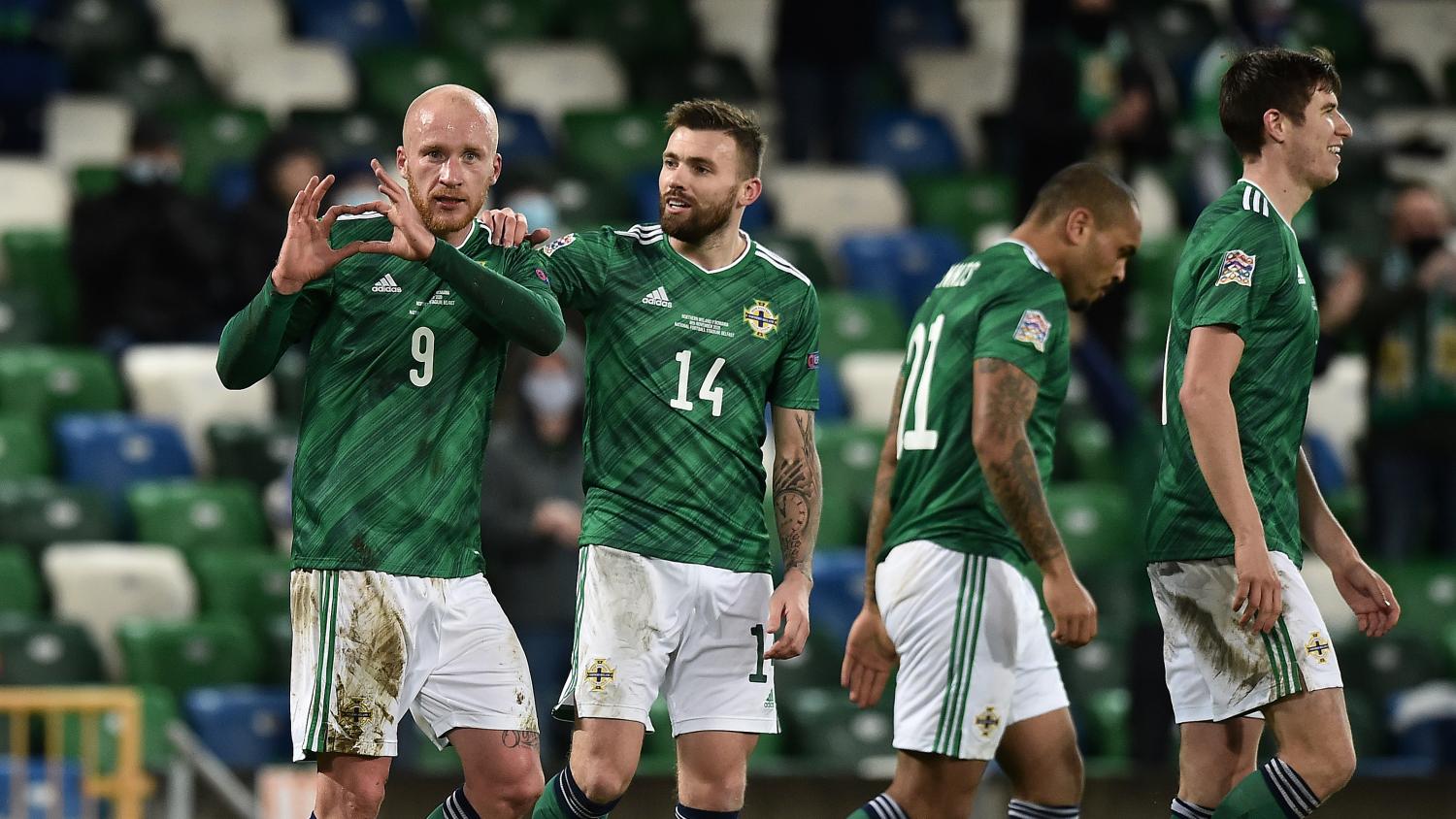 Following the victory over Jamaica, USMNT's next opponent is Northern Ireland on Sunday. The two sides will meet in Belfast for just their second matchup ever — the first being a 5-0 friendly victory for Northern Ireland in a 1948 friendly.

Even for a well-versed soccer fan, geography buff or political savant, the historical circumstances surrounding Northern Ireland — both as a territory and as a football team — can be rather confusing.

So here's a handy Q&A about Northern Ireland to get you informed for Sunday's friendly match:

Q: Where is Northern Ireland?

A: North of Ireland

It's also important to note that "Ireland" refers to the independent country, which is sometimes called Southern Ireland and in the world of international soccer is referred to as the Republic of Ireland.

OK that makes more sense, but why are there two different Irelands?

Long answer: To understand the current state of Irish politics, we must first go back hundreds of years. In the seventh or eighth century, the patchwork of Celtic kingdoms that comprised the island of Ireland for more than a millenium was united under one king. Then, the Anglo-Norman invasion of the 12th century marked the beginning of British sovereignty over Ireland, and in the centuries that followed, British rule on the island slowly grew.

By the 1600s, English settlers began to colonize Ireland, and in 1801, Ireland officially became part of the United Kingdom. Irish people suffered under English control. The British ruling class owned most of the land and laws were passed to discriminate against the Catholic majority. This period also included the Great Famine, during which a million people died due to neglect from the British government and even more left the country.

By the 20th century, the Irish people had enough and decided to revolt. In 1922, the Irish Free State (now called the Republic of Ireland) was formed, and Ireland was completely independent from British rule. Well, sort of.

The northern part of Ireland was home to English colonizers who came over in the 17th century. They benefited from British rule and made up the majority in that region. As part of the Partition of Ireland in 1921, the three southern provinces were given independence, while the north remained under British rule, thus giving us Ireland and Northern Ireland as we know them today.

How do Northern Ireland and the Republic of Ireland feel about each other today?

There is still tension between the two countries, but the violence of the 20th century has mostly subsided. The majority of Ireland (mostly Catholic) wants a United Ireland while most of Northern Ireland (mostly Protestant) wishes to remain part of the UK, meaning any change is unlikely.

Have there ever been talks about a combined Ireland national team for soccer?

That's an interesting question, because Ireland actually has combined teams in multiple sports, most notably rugby — which is Ireland's most successful sport in international competition.

Prior to the Partition of Ireland in 1921, there was only one Irish national soccer team. But after the partition, Northern Ireland formed its own football association. Both teams could select players from anywhere on the island until 1950, when FIFA ruled players must be affiliated with the region they play for.

Domestically, sports like gaelic football and hurling are organized into the All-Ireland league, which unites both Northern and Southern Ireland. While at the Olympics, Northern Irish athletes are given the choice to represent either Great Britain or Ireland, as there is no Northern Ireland Olympics team. As for soccer, both the North and the South have their own domestic leagues.

How strict are the eligibility rules to play for Northern Ireland?

The eligilibity rules for international socceer are actually the same for every nation, the only difference is which countries choose to expand their player pool. The Republic of Ireland is well-known for using the "Grandfather Rule," which under FIFA rules allows players to represent a country if one of their parents or grandparents was born there.

Some notable England natives in the Northern Ireland squad include left back Jamal Lewis, goalkeeper Bailey Peacock-Farrell and midfielder George Saville. The Republic of Ireland squad currently has two players, James McClean and Shane Duffy, as well as a few former players, who grew up in Northern Ireland. McClean grew up Catholic and said he didn't feel comfortable representing Northern Ireland, citing the hate toward Catholics in the province.

Which of the two teams has been better historically at soccer?

Historically, the Republic of Ireland has been better, but the two countries are pretty even at the moment. Northern Ireland has qualified for three World Cups (1958, 1982 and 1986) and one European Championship (2016), while the Republic has reached the World Cup and European Championship three times each. Northern Ireland is currently 45th in the FIFA World Rankings and the Republic of Ireland is 42nd, so there is no real difference in quality between the two.

How has the Northern Ireland national team performed recently?

The past decade has arguably been the most successful period for Northern Irish soccer since the World Cup qualifications of the 1980s. When manager Michael O'Neill took over in 2011, the team was ranked as low as 129th in the world. Five years later, O'Neill's side reached as high as 20th in the FIFA rankings.

O'Neill led Northern Ireland to the Euros for the first time ever in 2016, winning its qualification group and then advancing to the knockout round of the competition. He then guided the squad to 2018 World Cup qualification playoffs before narrowly losing out to Switzerland.

O'Neill took over Stoke City in 2019, and his replacement Ian Baraclough again led the team to a qualification playoff final, this time succumbing to Slovakia in extra time of the Euro playoffs.

This last year was more of a struggle though. Northern Ireland's only victory was a defeat of Bosnia and Herzegovina on penalties in the Euro playoffs. Its other seven matches resulted in two draws and five defeats — with just four goals scored. This resulted in Northern Ireland being relegated from its UEFA Nations League B group. Still, only one of these defeats came by more than one goal.

Who are some of the key players for Northern Ireland?

Midfielder Steven Davis, formerly of Southampton and now back with Rangers, has the most caps of any Northern Irish player ever with 124. Northern Ireland's strength though is at the back. Leicester defender Jonny Evans is probably the team's best player, while his center back partner, Craig Cathcart, is a strong performer for Watford. Fullback Jamal Lewis of Newcastle will be a game-time decision, but he offers a strong attacking threat down the left side.

Leeds United's Stuart Dallas is the real wild card for Northern Ireland. He can play on both flanks as a winger or a fullback, and he can also fill in as a central midfielder. Manager Ian Baraclough will likely field him on the right side of his formation.

Does the Northern Ireland squad have any potential weaknesses?

This one is easy: goal scoring. Northern Ireland hasn't scored multiple goals in a competitive match since defeating Estonia 2-1 in June 2019. Strikers Conor Washington (29 caps, four goals) and Josh Magennis (57 caps, eight goals) both play at the League One level.

Journeyman Kyle Lafferty, now of Kilmarnock in the Scottish Premiership, has 20 international goals — second all-time for the Northern Irish — but he has not scored for his country since 2016.

The friendly against the United States is also sandwiched between World Cup qualifiers against Italy and Bulgaria, so Northern Ireland will likely be looking to rest some of its regulars.

Last question: is Will Grigg going to play?

Sadly, no. Grigg has not made an appearance for Northern Ireland since 2018, and with just three goals in League One this campaign, it is safe to say he is no longer on fire.