CBSSN Was Supposed To Air NWLS’s Best Rivalry; Instead The First 20 Minutes Were Bull Riding 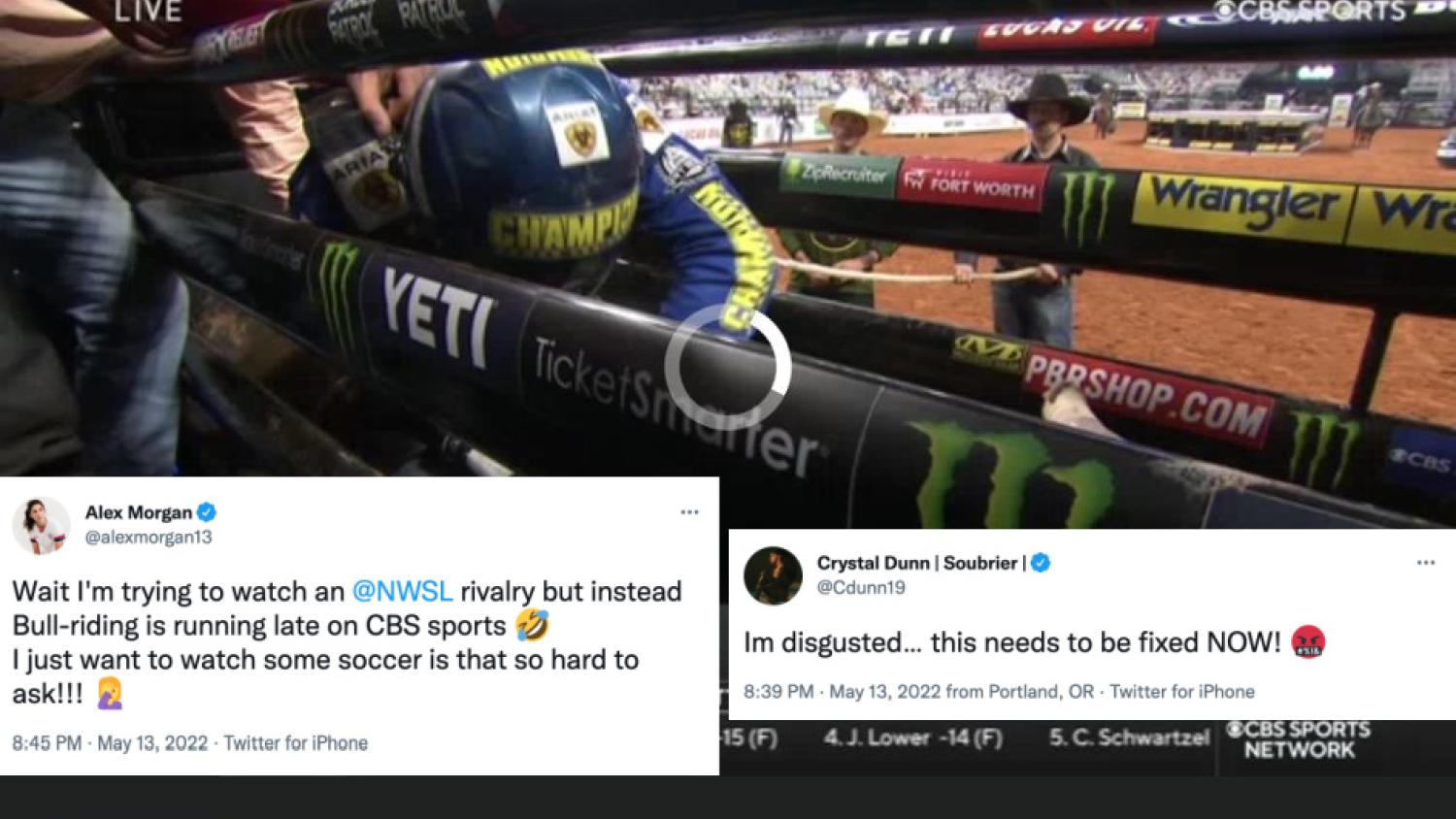 NWSL fans were infuriated over some real bullsh!t on Friday night.
The18

Fans tuning in to CBSSN for one of the best rivalries in American sports on Friday night were infuriated for the first 20 minutes of the match. As the OL Reign and Portland Thorns began play at Providence Park, CBSSN was showing a got damn rodeo.

CBSSN didn’t join the Thorns-Reign match until 20 minutes had passed by, instead showing bull riding, which many consider animal abuse. The match finished in a 0-0 draw, but the story was the disrespect CBS showed women’s soccer.

Fans, members of the media and even NWSL/USWNT stars took to Twitter to express their disgust at CBS, including Alex Morgan and Crystal Dunn.

Why is Bull riding on instead of the game??‍♀️@nwsl @CBSSportsNet

Wait I'm trying to watch an @NWSL rivalry but instead Bull-riding is running late on CBS sports
I just want to watch some soccer is that so hard to ask!!! ‍♀️

Im disgusted… this needs to be fixed NOW!

Dunn is a member of the Thorns and she couldn’t even watch the match. She’s missing this season while pregnant with her first child, though she’s still been training with the team.

For decades, women’s sports have been mostly ignored by the largest media companies. Though that’s begun to change in recent years with higher profile coverage of the WNBA, NWSL and women’s college sports, the truth is women’s sports generally remain second class in the minds of the executives at broadcasters like CBS, NBC and ESPN.

Such was the case Friday night as bull riding was given precedence over the NWSL. Mother fucking bull riding.

While it’s not uncommon for broadcasters to join games in progress because of prior events going long, it’s not common for the prior event to be something most don’t even consider a sport and some consider animal abuse. Look, I’m from Texas; I grew up going to the Houston Rodeo every year, so I’ve seen more than my fair share of bull riding. It’s not an event that deserves to preempt soccer, and CBS should be embarrassed over the disrespect it showed the NWSL.

Though CBSSN showed the start of the Reign-Thorns match on its website, many fans reported problems getting the stream to work. It didn’t help that because the game was supposed to be on CBSSN, fans who subscribe to Paramount+ (where most of the matches are streamed) couldn’t even use the streaming service to view the game.

To say NWSL fans were pissed would be a gross understatement. CBSSN’s tweet about the match starting at 10:30 p.m. ET was ratioed hard with hundreds of replies and quote tweets lambasting the broadcaster.

But how will we ever know? Y'all think boys riding bulls is more important and the game is now almost a third of the way through the first half and we have seen it yet.

When we talk about women’s sports not being taken seriously, this is a huge part of the problem. Even when a match is on TV, it’s bumped for BULL RIDING! How are people supposed to follow the NWSL when it’s treated this way? https://t.co/nAKnEABkDF

A LOAD OF BULLSH-

[a comically oversized cane yanks me off the stage]

Broadcast is showing bullriding; they say "You can find the NWSL game on https://t.co/HaGRXZiDJq!"; I try there as directed and the page redirects to the homepage, not a word or link mentioning the #NWSL . #CBS please do better.

FIRST OF ALL, bull riding is so mean.

Day in the life of an NWSL fan: huge rivalry is supposed to be on both CBS Sports Network and Paramount+, but Paramount doesn’t have the game listed and CBSSN is showing bull riding, which is apparently a sport? #NWSL #PORvRGN pic.twitter.com/YjFl7kwBhq

Literally one of the biggest rivalry games in women's soccer. Cool.

The only reason I subscribed to Paramount Plus was for the NWSL games!

This is absolutely ridiculous @CBSSports no one would rather watch bulls being abused than WOMENS SOCCER!!! PUT THE GAME ON! #NWSL #RGNvPOR @CBSSportsNet !!!

last night i learned that the real rivalry is not portland vs seattle, it's nwsl fans vs bull riding #NWSL

next they’re gonna air darts in place of the nwsl. anything instead of women

While the large population of women-hating soccer fans will probably say the NWSL doesn’t get good ratings, it’s worth pointing out the NWSL Challenge Cup, when put on TV, has had better ratings than MLS this season.

It’s really unfortunate that this NWSL game is getting pushed for a fucking rodeo but let’s take a deep breath and reflect on the actual important thing here: both of these events will get better TV ratings than an MLS game.

As for the match, you can catch the highlights below, including a few from the opening 20 minutes before the CBSSN coverage began.