In Her Own Words: Kristine Lilly On The Most Important Play In The History Of U.S. Soccer No One Remembers 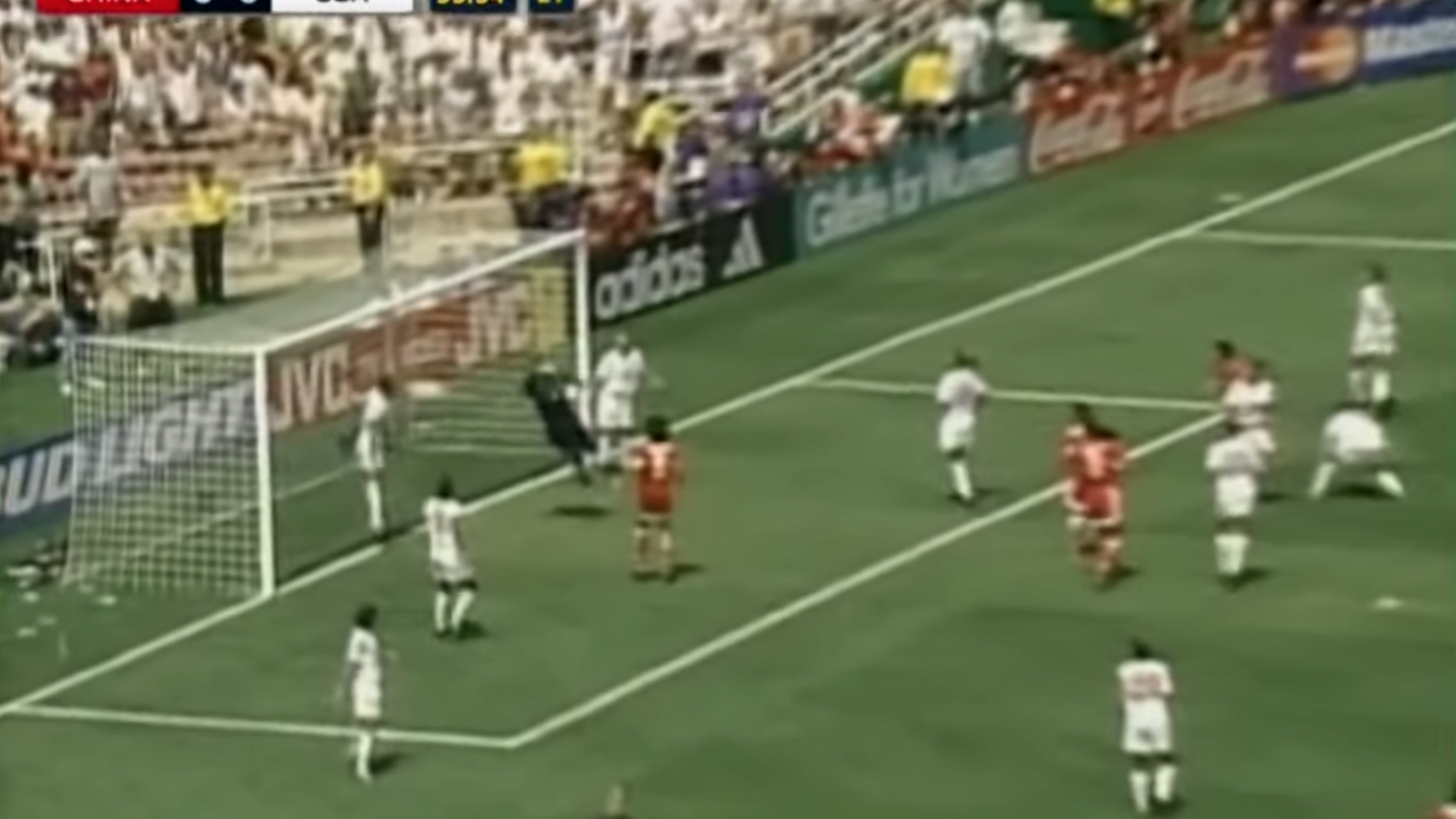 Were it not for this play from Kristine Lilly in 1999, the U.S. probably would have lost the Women’s World Cup final.
World Cup Nerd 2014 | YouTube

There are moments in a match that can go unremembered by the final whistle. Sometimes these are simple misfired shots or dubious fouls, forgotten over the course of a long match. Other times, as it was on a sweltering day in Southern California in 1999, they are significant in the moment but largely overshadowed by events later in the game.

Kristine Lilly’s header against China in the 1999 Women’s World Cup final may be one of the most important plays in the history of U.S. Soccer, yet it’s rarely remembered in the same way as Michelle Akers’ dominance in ’91, Abby Wambach’s header against Brazil in 2011, Carli Lloyd’s hat trick against Japan in 2015 or Brandi Chastain ripping off her shirt in ’99.

For soccer fans, the summer of 1999 was magical. For 22 days, the U.S. women’s national team redefined what soccer in America was and could be. The country — supposedly still a soccer-hating nation with a struggling domestic men’s league — turned out record crowds, filling giant football stadiums to watch women kick a ball instead of men bash each other’s brains to oblivion.

The tournament was one of the greatest advertisements for the game of soccer imaginable. Yes, the U.S. women were amazing, but so too were Sissi and Brazil, Ann Kristin Aarønes and Norway and Sun Wen and China. All corners of the world were represented by fantastic teams — Nigeria took Brazil to the brink of elimination, losing on a golden goal in the quarterfinals.

But the final was always going to come down to Sun’s China and the United States, the two best teams in the world. Both sides went undefeated on their way to the final, neither ever really coming close to losing.

Of course, we all know how the story ends: In a shootout, Briana Scurry came off her line to save one penalty kick, Brandi Chastain converted the last spot kick to win it and ripped off her shirt straight into American sports lore.

But before that, before the penalty kicks, before the Wheaties boxes, before the awkward Matt Lauer interviews, there was Kristine Lilly making perhaps the play of the game, one that has largely gone unnoticed over the last 20 years when talking about that fateful day in Pasadena, California.

We recently spoke to Lilly, author of the new book “Powerhouse: 13 Teamwork Tactics That Build Excellence And Unrivaled Success,” about that moment. Here is, in her own words, what happened on the most important play in U.S. Soccer history that no one talks about.

Kristine Lilly, In Her Own Words

It was 1999 at the Rose Bowl in Pasadena, California, for the Women’s World Cup final between the United States and China. The match was scoreless through 90 minutes, sending the teams into extra time. Back then, extra time in FIFA competitions involved the Golden Goal — it was sudden death; first team to score wins.

We were in overtime and I don’t even know how much time was left. We were in overtime. Michelle (Akers) had just got punched in the face by Bri — our goalie — on another corner kick ball. We were kind of getting pounded by China a little bit.

Michelle’s out of the game so obviously our strongest header is gone so we’re in a situation with another corner. I’m there on the post with my left foot because of my strength — I’m left footed.

China was about to take its fourth corner kick of the match. It was almost as if the TV production crew knew what was coming. On an earlier corner kick, the camera zoomed in on Lilly pouring water on her head to cool off. The camera did the same on this corner in the 100th minute. “It was so, so hot; I remember I was so hot,” Lilly recalled.

The corner was taken by Liu Ying, who found teammate Fan Yunjie about eight yards from goal.

The ball comes in and the girl out-heads our team and the ball goes past Bri and I kind of take two steps in to pinch in and make the goal smaller and head it out.

It all happened so quick.

The ball when I headed it, I didn’t head it to clear, I was just getting a head on it. It bounced right in the six-yard box where there were three Chinese players surrounding it, then you see Brandi (Chastain) clear it.

Lilly’s header got the ball off the line and Chastain’s acrobatic clearance pushed the ball out of the 18-yard box and the U.S. survived the best scoring opportunity for either team in extra time.

It’s all those little things that matter. I’ve been on the post 354 times and I’ve probably, that’s the only time I’ve saved it off with a header and one or two times I’ve cleared it off the line with my feet.

So it could be monotonous your job, over and over again doing the same thing and then it could be something where you’re just, “Holy cow, thank God I was doing my job.”

In extra time, Lilly would convert her penalty kick after Liu’s was saved by Scurry in the third round. The Americans made all five of their spot kicks, capped off by Chastain winning it on the fifth.

It’s those moments — that’s not just the only moment that’s the reason we won in '99, but it was a moment and if I didn’t do it, it would’ve affected us differently. Just as if Brandi didn’t hit her PK or Bri didn’t make her save — all these little moments add up to success and I think if teams remember that, and that each person matters, it is really a strong way to look at the aspect of being a part of a team.

Check out the play in the video below to see Kristine Lilly’s heroic header save in the 1999 Women’s World Cup final (or better yet, watch the entire match). Then check out Lilly’s new book, Powerhouse, which comes out May 7, exactly one month before the 2019 Women’s World Cup kicks off in France.

Sixteen years after Kristine Lilly’s goal-line clearance saved the day for the USWNT, Meghan Klingenberg pulled off a similar header save at the 2015 Women’s World Cup. In the group stage against Sweden, the 5-2 defender stopped a goal-bound shot with a header that deflected off the crossbar and out. The match would finish 0-0, with the draw helping the U.S. secure first place in Group D, setting up its path to a third Women’s World Cup championship.