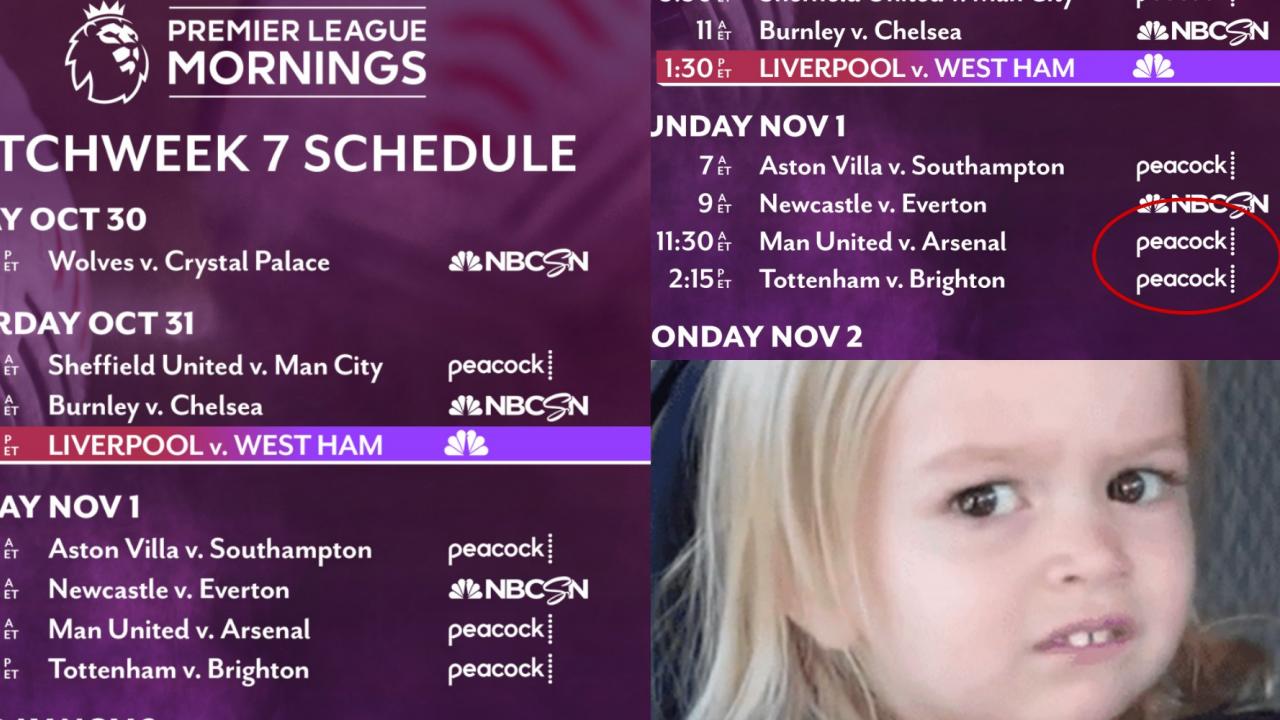 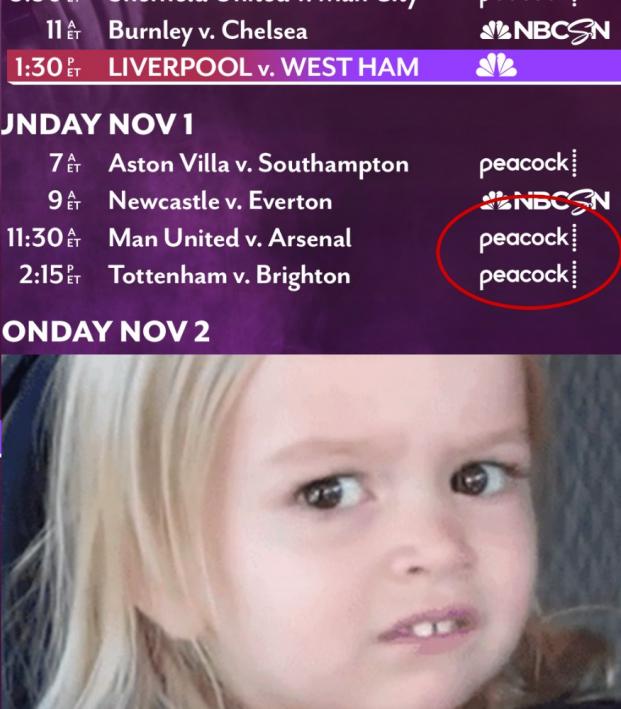 I’m getting so fucking tired of writing these stories. Pretty much every week, an American broadcaster is treating soccer fans like garbage. We’d love to just write a simple "How To Watch Man Utd-Arsenal" story and tell you all about the big match, but instead NBC has once again flipped the Peacock bird at all us soccer fans in the U.S.

I’m beginning to lose track of how many articles I’ve written in the last few months talking about how executives at CBS, NBC and ESPN have decided to make soccer fans pay for every teensy bit of soccer content. CBS has hired tons of great broadcasters for the Champions League but hides them all behind the paywall of CBS All Access, a streaming service that is still buggy as hell. ESPN gobbled up the rights to Serie A and Bundesliga, but rarely actually puts any of those matches on TV, instead putting them on the ESPN+ subscription service. And NBC, which used to give Americans every single Premier League game for free with a basic cable subscription, is now deciding to just throw away all of the goodwill it created over the last decade.

It’s astonishing how quickly NBC has alienated its once-fervent fanbase. It’s also exhausting keeping track of all the streaming services soccer fans must subscribe to in order to watch what used to be on basic cable (though we did our best here).

When Peacock was first announced, we thought it would just replace NBC Sports Gold and most matches would still be on NBCSN or NBC. We were dead wrong.

From the start, NBC began taking massive matches between two Big Six clubs off American airwaves and onto Peacock Premium, starting with Arsenal-Liverpool in July. With the start of the new campaign, NBC has proven even more willing to put matches that previously would be on broadcast TV hidden away on its obscure streaming service, including most of defending champion Liverpool’s matches to start the season.

These decisions have absolutely ruined my weekend rituals, and I’m not alone.

So it’s no surprise then that this weekend’s biggest game, Arsenal visiting Old Trafford to face Manchester United, isn’t on TV in the U.S.

Traditionally one of the biggest dates on the Premier League calendar, NBC has decided not to even put Manchester United against Arsenal on TV in the U.S. We’re not surprised at this point given what NBC has already done this season, but we’re still shocked that the broadcaster is treating soccer fans with such disdain. Forcing fans to pay for yet another subscription on top of basic cable is a real shit way to treat your fanbase, especially when still Peacock isn’t available on all TVs and is often buggy on those that do have it.

There is really no need for NBC to not air this match on TV. NBC is showing a NASCAR race, which is cars going in circles, but I understand that people watch it. But NBCSN is showing a rerun of an auto auction show. That’s where NBC ranks soccer fans: below the types of people who watch reruns of auto auction shows, whatever the fuck that even is.

I reached out to NBC for comment and this is the response they gave:

“NBC Sports is scheduling Premier League matches across NBC, NBCSN and Peacock Premium, which includes games in different time windows on each platform.”

Very informative and enlightening. They can’t even pretend they’re trying to broadcast the best matches.

To make matters worse, NBC isn’t allowing Telemundo to broadcast these games either, instead forcing Spanish viewers to find the match on Peacock as well. Telemundo will be showing Bee Movie during the Man United-Arsenal match. (At least for the Champions League in the U.S. we can rely on Univision’s steady coverage in Spanish.)

The crazy thing is NBC knows that people are hating on them for being such greed-bastards. (Is that a phrase? Let’s start using it for these assholes.) Every single time the @NBCSportsSoccer Twitter account posts about upcoming matches, which inevitably include too many on Peacock, the account is inundated with vitriolic replies about how awful NBC is. (CBS is getting the same hate with UCL games on All Access.)

Killing me. Arsenal and MU not on. This season is driving me away from watching. Why not just go all peacock all the time - then the US fan base you built up the last 5+ years can get on with something else

You put the biggest game of the weekend in terms of American fanbases behind a paywall. Such a blatant cash grab from NBC. How we went from having all games available to fans to this is a genuine disaster.

You guys need to put more on NBCSN/NBC. It’s really devaluing your product and making harder to watch by far. I’m not watching a full game on my damn phone and Samsung TVs don’t support peacock (work on that please)

Why this sucks. I had my 80 yr old dad set up to dvr everything on Xfinity, he loved it and watched every game. I have tried several times to explain to him how to watch on Peacock on Xfinity. He forgets and is He is so dissapointed that he cannot watch the one thing he loves

I swear....
But on a good note, since there is less EPL on TV now than there was in 2000, I can sleep later on the weekends. Thanks @NBCSportsSoccer !

And that’s just a small sampling of some of the less-malicious responses from Friday. This happens every week.

Admittedly it could be worse, as it is in England, and it may in fact become worse in the years to come. But at this point it’s so bad in America that even though I have a soccer game going on my TV almost every waking hour, the algorithm for my YouTube TV viewing doesn’t even expect me to watch Premier League matches on NBC or NBCSN anymore.

It’s endlessly frustrating having to deal with giant corporations who want to squeeze every dollar out of American soccer fans (during a fucking pandemic and financial crisis no less). So until things change, we’re going to keep calling out these greed-bastards. (Yes, I think that word will catch on just fine for NBC, CBS and ESPN.)