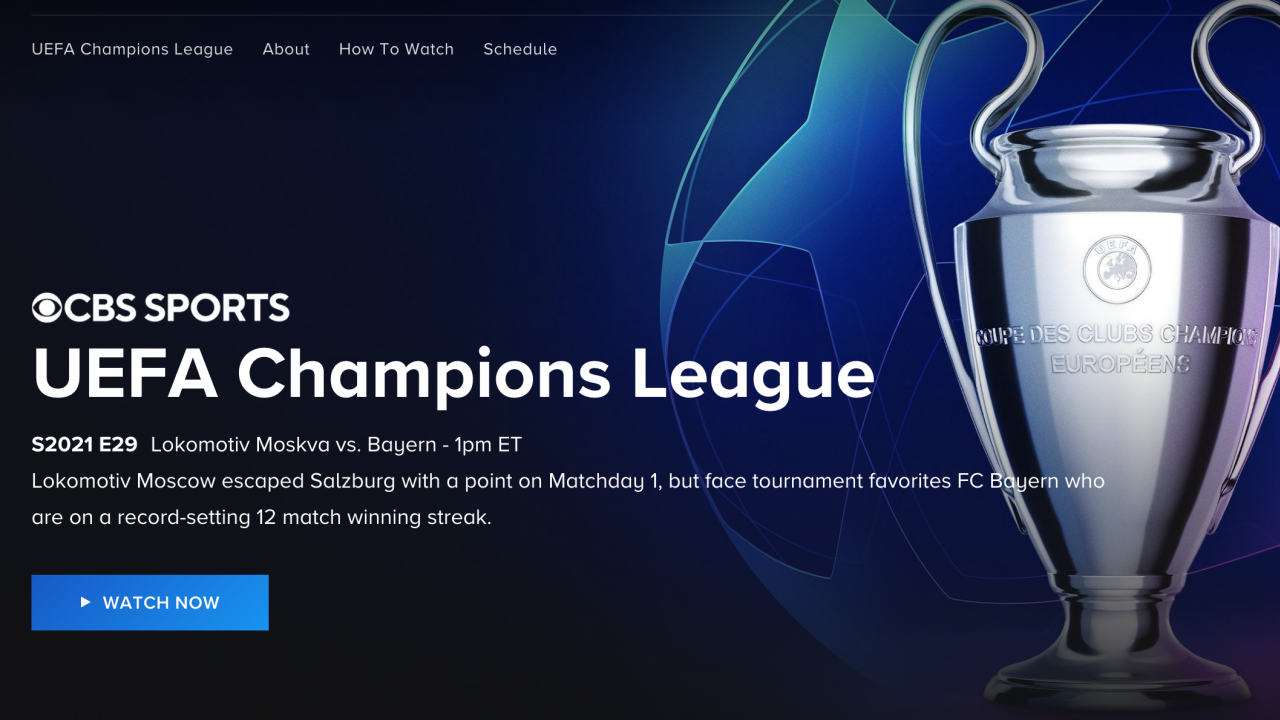 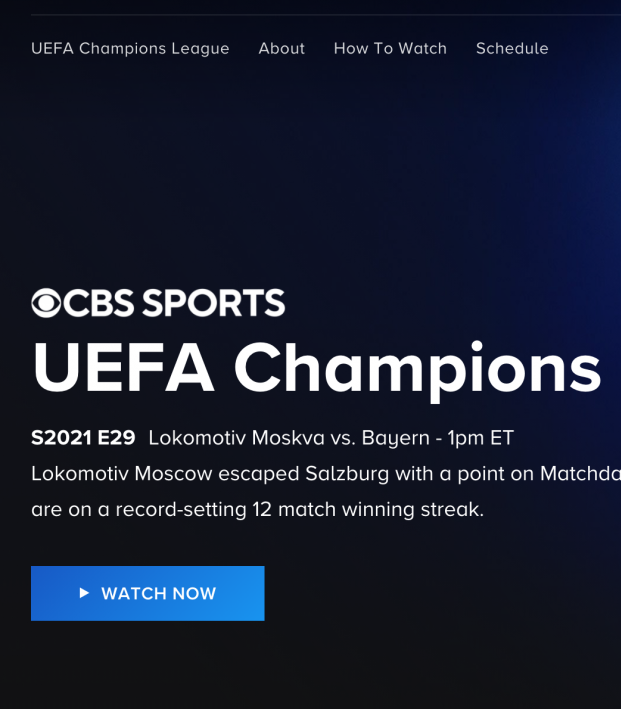 I take back every nice thing I said about CBS’s coverage of the Champions League. CBS All Access is still an utter mess and it’s clear the broadcasting giant doesn’t give any fucks about us soccer fans.

Last week, I wrote about how CBS’s Golazo Show was a fun way to provide plenty of action as it whipped around coverage of all six matches going on at once. By Wednesday I was sick of its inconsistent jumping from one match to the next. On Tuesday, I was ready to cancel my CBS All Access subscription and just watch the rest of the competition in Spanish.

The most baffling aspect of CBS’s coverage of the Champions League is that the American broadcaster hired so much great talent (Kate Abdo, Roberto Martinez, Alex Scott, Jamie Carragher, Peter Schmeichel, etc.) but hides it all behind the paywall of CBS All Access, its streaming service that requires a monthly fee. Only the meh Golazo Show is on TV, on the obscure CBS Sports Network.

A begrudging subscriber to All Access (I used the company credit card but wasn’t happy about it) I tuned in for the hour-long pregame show ahead of the two early Champions League matches on Tuesday. Unfortunately, the production was hampered by countless errors that then spilled into the game action.

At the start of the broadcast, the audio was completely garbled and inaudible. No, it wasn’t just Carra’s Scouser accent, the broadcast just had worse production values than AOC streaming Among Us. 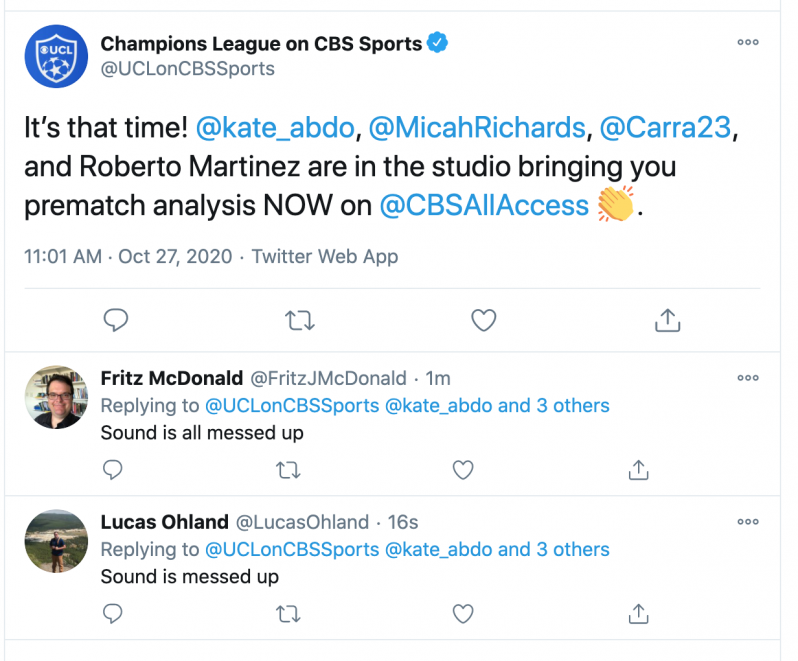 CBS quickly deleted this tweet as the hate replies piled up.

After a few minutes the audio was sorted out, but soon the video began cutting out before completely disappearing for nearly five minutes. This happened a couple more times throughout the pregame show. At times it seemed like Abdo was taunting us when she said “brilliant to see you” to Schmeichel, who we could not see.

Eventually the early matches kicked off and it didn’t get any better. With the video feed cutting in and out, the screen went blank when the players walked out onto the pitch.

On the Shakhtar-Inter match, the announcers commented on how “it’s a wonderful setting” in Kiev, but no setting could be viewed. The Bayern experience was even worse. 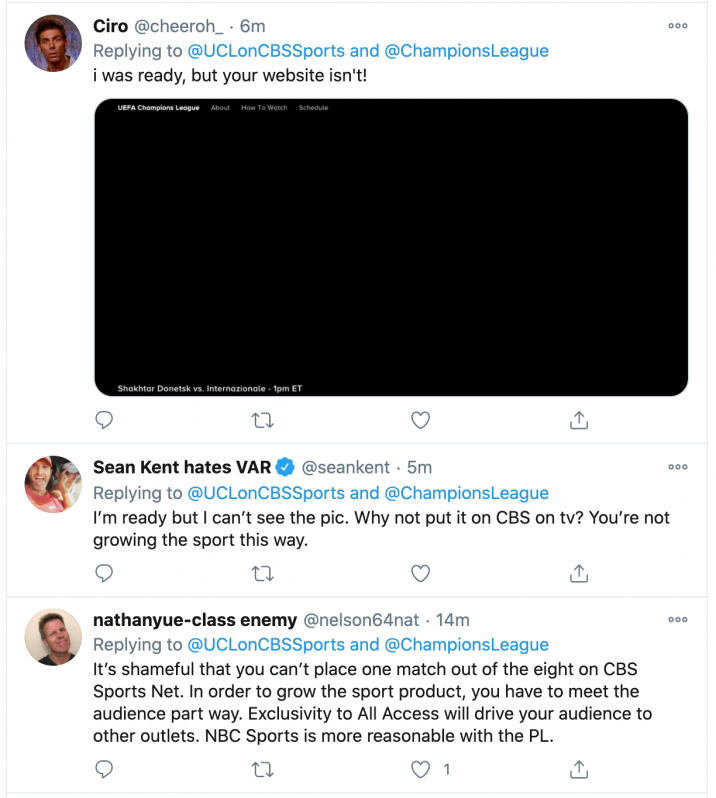 While the video returned for the start of the match, the audio was about 30 seconds off from the action on the pitch, announcers reacting to a Manuel Neuer save or Robert Lewandowski chance well after it actually happened.

This went on for the entire first half and into the second half (update: it was finally fixed in the 75th fucking minute). This was a pathetic stream, on a pay service, for the biggest soccer competition in the world.

It continued with issues streaming the Liverpool match later in the day. 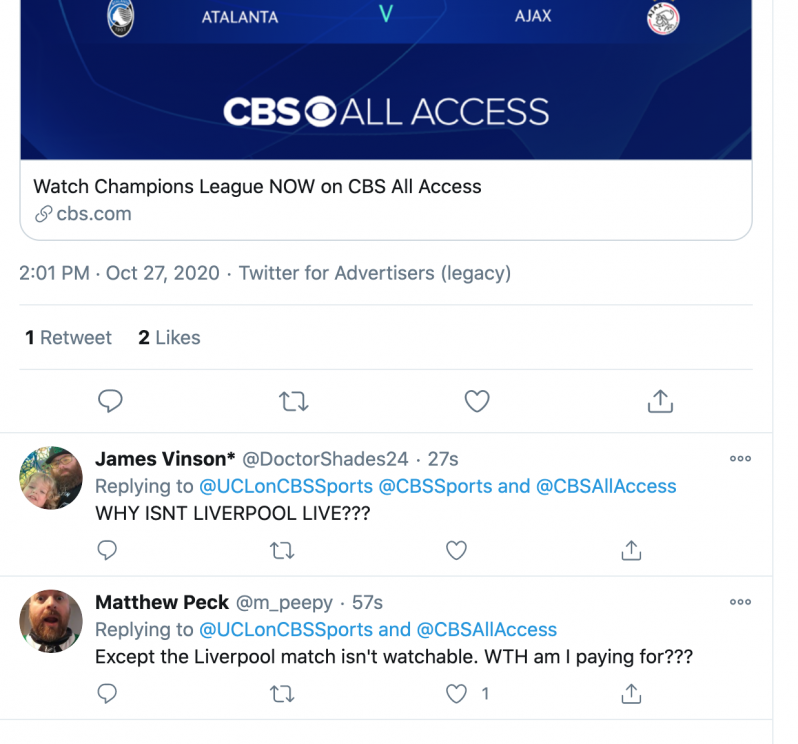 How the hell is this still happening, CBS?

We could forgive the regular glitches when the Champions League first came to All Access, as there were extenuating circumstances after Turner Sports sold the rights in the middle of the season and a pandemic. We might even give leniency in the first week of the Champions League, which was indeed fraught with playback issues.

But now, months into the process, CBS still can’t get its shit together. And it’s making soccer fans pay for such garbage. It was telling that, aside from the few tweets we’ve shown replies to, CBS’s soccer social media accounts were very quiet despite all the action on Tuesday, clearly aware of how much they were fucking up.

I'll be watching them on TUDN

I’m with Elissa on this one. American soccer fans deserve better. At least we have Univision.