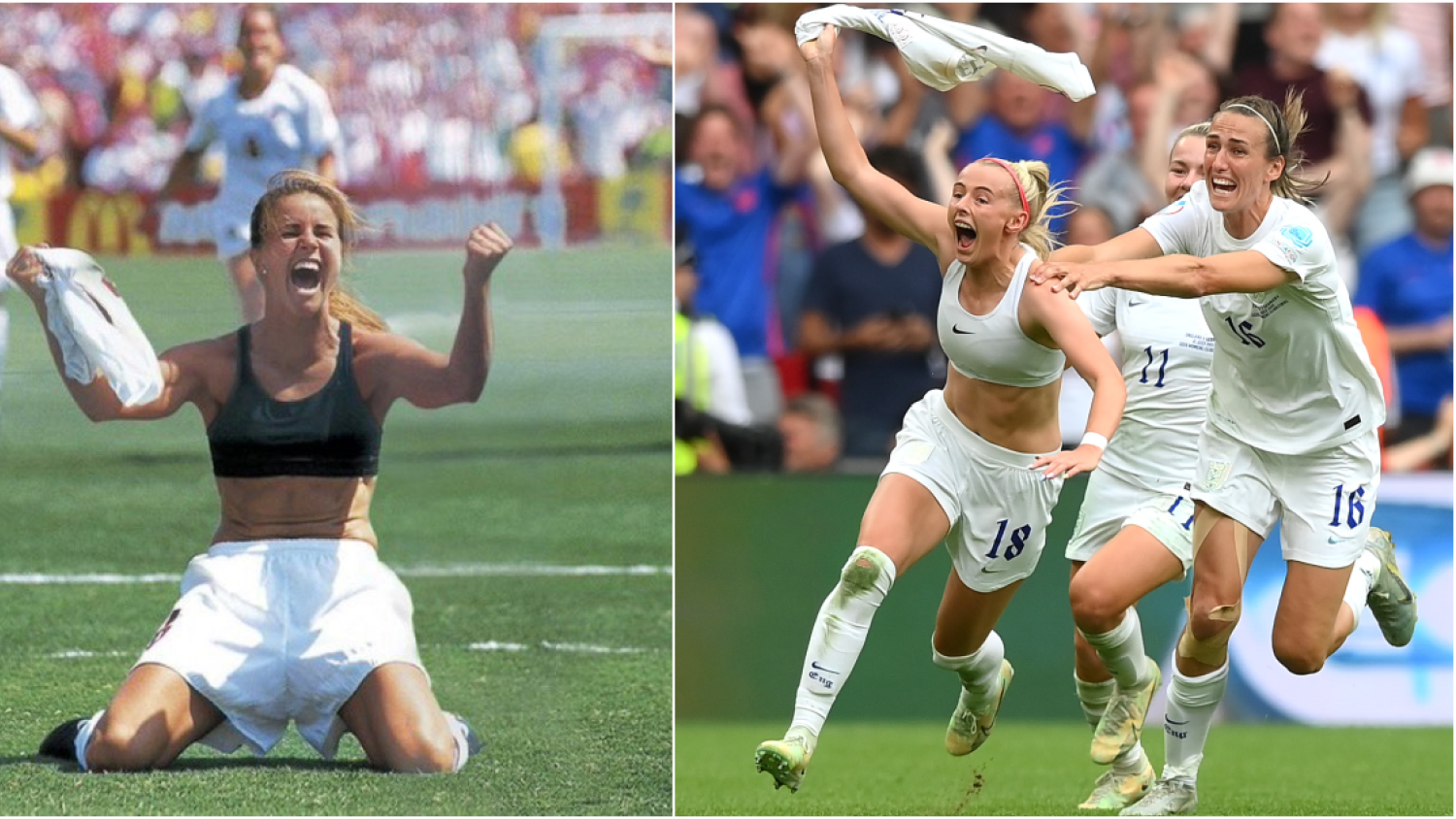 There were many parallels between Chloe Kelly’s celebration and Brandi Chastain’s moment 23 years earlier, even if Kelly didn’t make the connection herself.
The18

A record crowd cheering on the home nation at an iconic stadium on a steamy summer day. A dramatic winning strike followed by a ripped off jersey revealing a Nike sports bra. Take your pick: Brandi Chastain after winning the 1999 Women’s World Cup or the Chloe Kelly celebration after lifting England to its first European championship.

England finally had its Brandi Chastain moment, though it turns out Kelly’s celebration wasn’t an homage to the USWNT star but to a man with two England caps to his name.

The Three Lionesses edged Germany 2-1 in extra time in front of a packed house on Sunday at Wembley, giving the host nation its first major soccer trophy since the men’s team won the World Cup on home soil in 1966. After Kelly scored the match winner in the 110th minute, she shed her white England shirt in jubilant celebration.

It wasn’t hard to spot the parallels to a moment 23 years earlier when Chastain ripped off her shirt, fell to her knees and raised two fists in celebration of the U.S. winning the Women’s World Cup in front of a packed house at the Rose Bowl.

On this day in 1999, USWNT beat China 5-4 on penalties to win the World Cup in California.

The similarities are indeed striking: a tournament that shattered attendance records, a home team living up to expectations to win it all on home soil and a shirtless celebration.

Chastain took note, sending a message to Kelly on Twitter and speaking about the match on British TV.

I see you @Chloe_Kelly98 well done. Enjoy the free rounds of pints and dinners for the rest of your life from all of England. Cheers!

As it turns out, Chloe Kelly wasn’t thinking about Brandi Chastain when she took her shirt off; she was thinking about Bobby Zamora, a man who once enraged Clint Dempsey to the point he punched his fist through a glass window.

Speaking with TalkSPORT, Kelly revealed she was emulating Zamora, who played for her beloved QPR, scoring at Wembley to earn the club promotion to the Premier League in 2014, with Kelly in the crowd.

“Bloody hell! Unbelievable! This is what dreams are made of!”

Though Zamora didn’t take his shirt off when he scored his Wembley goal, it makes sense Kelly wanted to emulate him and not Chastain. Kelly was 18 months old when Chastain scored her winner on the other side of the world. While the Chastain celebration holds a special place in many Americans’ memories, Kelly was just trying to create her own nation’s memories, even if we’d like to think otherwise.

I know it’s hard as Americans to admit that not everything is about us, but maybe we just let England have this one.

The players certainly seem to be having fun reveling in the moment after accomplishing something the men’s team has never done.

Even the queen chimed in with a message of congratulations for the women’s national team. She was a spry 40 the last time England won something in the sport it invented.

“Your success goes far beyond the trophy you have so deservedly earned.

“You have all set an example that will be an inspiration for girls and women today, and for future generations.”

The Queen has sent a message of congratulations to the @Lionesses:

Make no mistake, there is plenty to celebrate in England. The tournament broke all sorts of attendance records, saw a high level of play from every team (well, maybe not Norway) and featured countless great goals, saves and moments.

Record breaking from start to finish

The #WEURO2022 final has become the ALL-TIME most-attended match at either a men's or women's EURO final tournament pic.twitter.com/4wZqIP7rlm

So England can have its moment, and the USWNT will await the Lionesses at the 2023 Women’s World Cup in Australia and New Zealand to see if they really can bring football home.