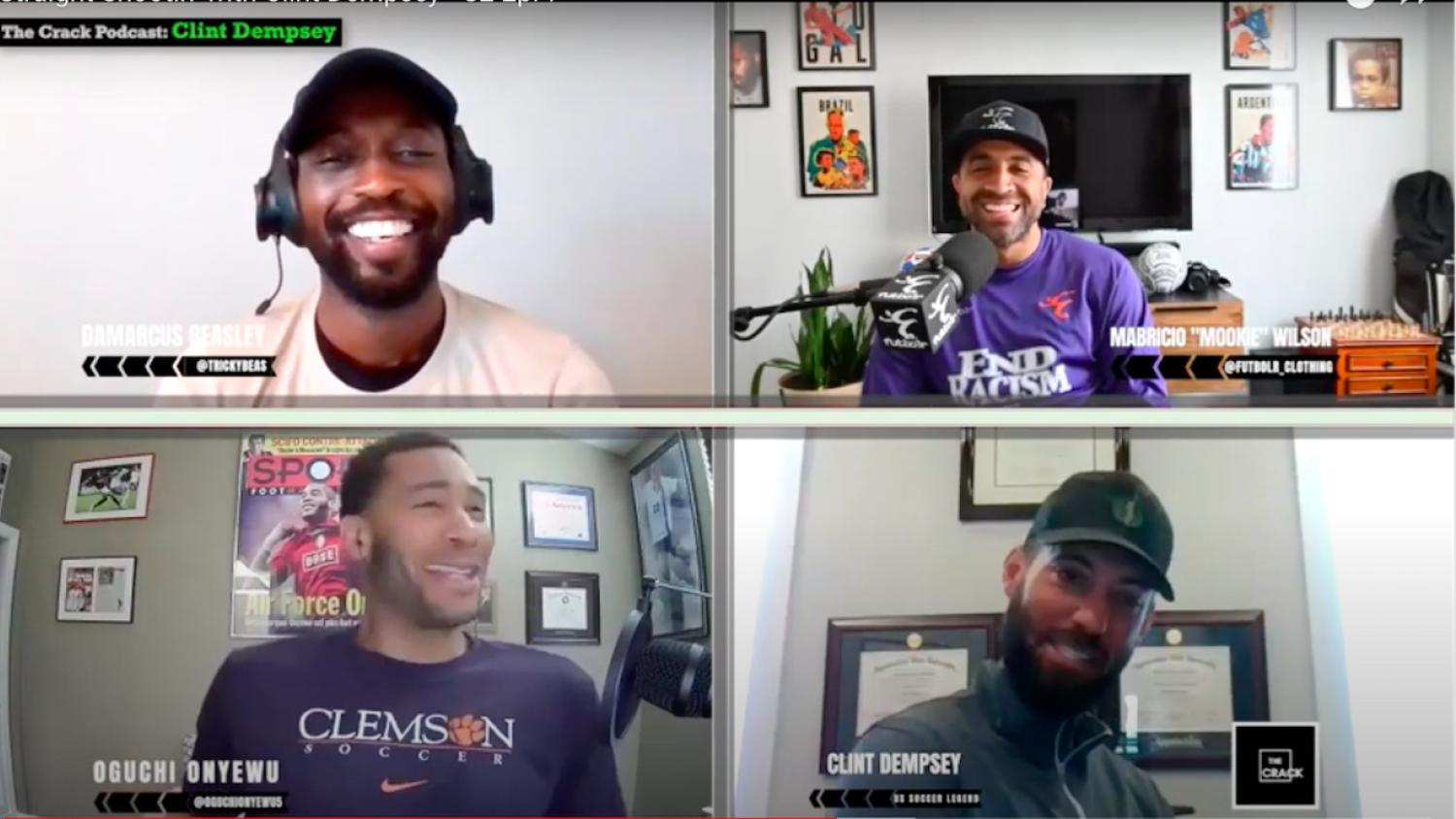 ‘Don’t punch a window’ is Clint’s piece of advice for the next generation.
YouTube

I’m not a podcast person. I listened to Season 1 of Serial on a road trip and only finished it because I was on a road trip. I then avoided the format for like six years until Grant Wahl’s American Prodigy: Freddy Adu, because I need to know where my son Freddy is and what he’s doing at all times.

But I’m back at it with The Crack Podcast, which I started simply because I love DaMarcus Beasley and Oguchi Onyewu, but I continue because it’s hilarious, informative and generally fucking excellent.

On Tuesday, S2 Episode 7 launched featuring a man who’s largely disappeared from the public eye since retiring in 2018: Clint Dempsey.

The episode starts with an appearance from former LA Galaxy/Colorado Rapids defender Ricky Lewis, who shares a story about the time he visited in Onyewu in Milan and they ended up partying with Ronaldinho in “Avatar World.”

Beasley then talks about Fort Wayne FC’s first match in USL League Two. Fort Wayne is Beasley’s hometown, and he’s now a part of the ownership group. The team lost 3-0 after an early red card, and Beasley offered his perspective on that.

Then Dempsey arrived, saying that he didn’t understand what was “going on with this video stuff” because he’s living “out here in the woods, bruh.” He needed help getting the video going. There can be no better start than that.

“Podcasts? You can miss me with that.”

Dempsey then revealed that he’s living in Pinehurst, North Carolina, now with his wife and five kids. He’s been “making babies, hunting, fishing, golfing and being an Uber driver for these kids.”

Good news for USMNT fans: Dempsey says we need to look out for two of his sons.

The two heart surgeries that Dempsey had are behind him. They weren’t life-threatening, although they were career-threatening and understandably led to a feeling of burnout at the end of his playing career.

“I felt like I couldn’t go at 100 percent. I don’t know if it was mentally or if it was just what my body was telling me, but I felt like I was stuck at a certain gear. I couldn’t push it as hard as I could before. It almost felt like being on a bicycle, you can’t push it into that next gear on a mountain bike or something like that.

"Having that, with dealing with some of the politics sides of the game, dealing with your body getting older and more difficult to bounce back and the grind of it, it wasn’t as enjoyable. It was good to take a step back and do things that I enjoy doing.”

Interestingly, Dempsey then mentioned how the USMNT’s failure to qualify for the 2018 World Cup only made it easier to retire since he didn’t have anything to chase, so there’s another great achievement by that group of players — contributing to Clint Dempsey’s retirement.

Beasley echoed that sentiment, although for him it was the Houston Dynamo’s consistent ability to be terrible.

“That is my greatest moment in soccer (the goal against Ghana), because of Beasley. That’s real right there. I always dreamed about playing in the World Cup and being able to score a goal and to have from a player who I looked up to, and had a chance to play against … first time I played against him, we were winning 3-0, and Beas was keeping possession and I was like ‘Come on, show me what you got!’ and he passed the ball and laughed and I laughed, laughing at myself, like ‘man, I know I’m tripping,’ but at the same time I wanted to test myself against the best, and Beas was the best in MLS.”

On what the USMNT needs?

“I think you need people to be willing to be outside their comfort zone to go in hostile situations and environments and be able to deal with those and figure out a way to be successful. When the chips are stacked against you, the fields are not ideal, the ref is not calling things in your favor, you gotta be in tough situations and be willing to put yourself in difficult environments. … It’s being able to say ‘I want to put myself in the best environment in terms of testing myself, and see if this is really for me’ and I think you’re seeing that with a lot of the youth today.”

On his own style?

“If I’m gonna fail, I’m gonna fail doing what I love and how I do it. I have to put my flavor in this recipe, otherwise I’m not eating it. … If your team is that good that you can keep swinging it back and forth in the midfield all the way up to when you’re going to cross the ball or cut it back and find some one in the box, but we weren’t that good! We were pretty good, but we weren’t that good. You had to have some wildcards in there.”

Did he want to break Landon Donovan’s record?

“I mean, I was trying to break every record I could break.”

“The situation was, and this is how I always felt, I felt when other players got injured and they came back they were right into the team. Then when I had an injury and I came back it was never like you got right back into the team. But let’s go back even further, I dealt with five coaches in my first five years there and every time I’d have to win a starting spot, new coach would come in and I would not be a starter. I’d have to win my starting spot over and so forth is kind of what I would have to deal with.

“Then there was a game that we were playing against Hamburg in the semifinal of the Europa League. I was told by one of the player liaisons there — I forgot what his actual role was — but it was like ‘Hey, get ready. You’re starting.’ I’m like ‘Yeah. I already know I’m starting! Why are you calling me telling me to be ready? When have I not been ready?’ This was after the Juventus game. I figured since I did that, had a strong showing, showing I’m back to fitness that like, alright, well, things are looking good again.

“Then when I got there I found out I wasn’t gonna be starting. Another player was gonna have to get like an injection or something, but he was gonna be able to play. I remember walking into the coach’s office and being like ‘What’s up? What’s going on?’ And they’re like yeah and I’m like ‘What do you mean? This is crazy.’ When everybody else was in the starting lineup and they come back from injury and they show their fitness they get back into the team. He’s like ‘Well it’s not like you’ve been pulling up any trees’ and I said ‘What about the goal against Juventus? That was a damn giant big oak. That was a big old tree.’ Right before the game’s about to start.

“I was like ‘Y’all talk to me on a need to know me basis but I ain’t one of them. Y’all got me messed up.’ I left the locker room and I said something like ‘Y’all can’t tell me that I shouldn’t be starting! There’s no way I’m not in this 11!’ There was like a plate of glass, boy, I reached back and I was like ‘bam!’ stuck my fist through it. I didn’t even know what I was hitting, I didn’t know what was gonna happen. But I went through it and was like ‘Oh damn!’ I pulled out and almost my ligaments were coming off and stuff. They stitched me up, I like wrapped my hand, played in the game, came on as a sub, we ended up winning, I came on in the second half.

“The next morning I had to get surgery. I almost severed it enough that it would’ve been a long surgery because if you sever the ligament enough then it was to be reattached or something like that. If you ever saw me scoring that I was doing this (waves hand in front of face) afterwards and it was like ‘YEAH!’ y’all trying to keep me down and I’m still going.”