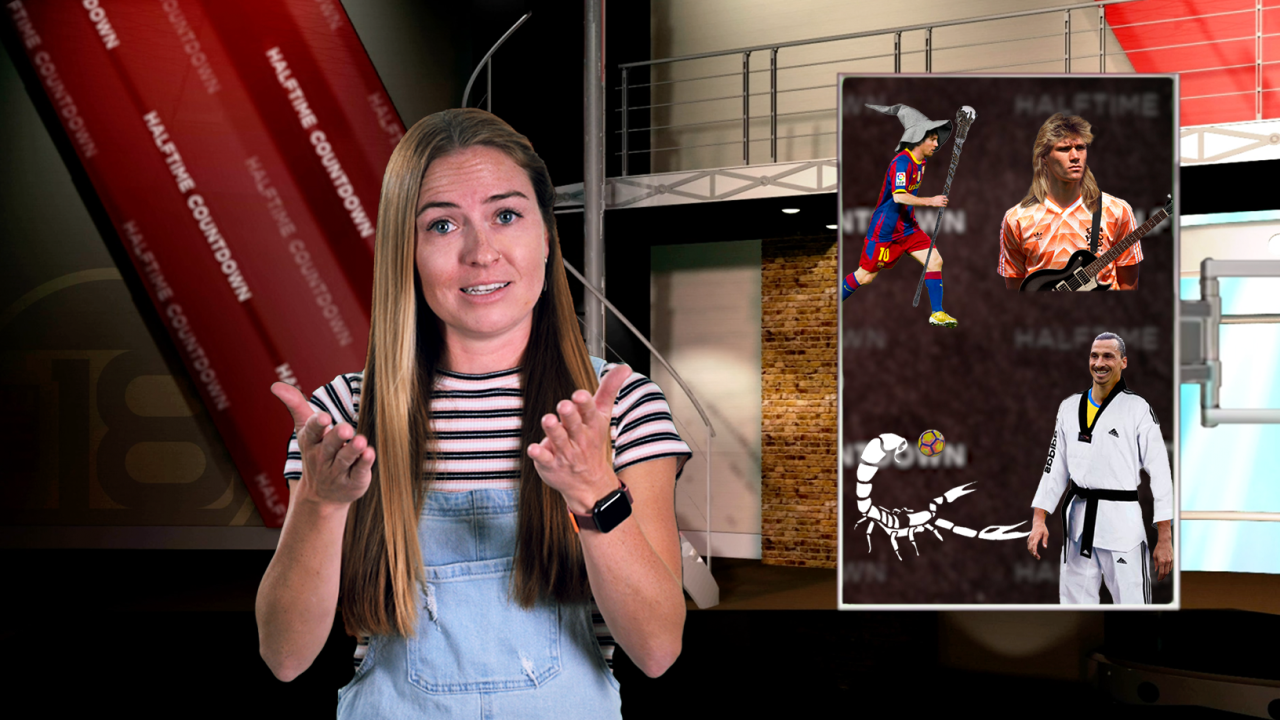 Welcome The18's Halftime Countdown of the Best Goals Ever Scored!

Let's take it back to 2012 for this one. Towards the end of the year, England traveled to Sweden for a friendly. Zlatan had already scored a hat-trick to put Sweden up 3-2 on the night. And that might have been magical enough, but in stoppage time, a mis-headed clearance by keeper Joe Hart setup Zlatan to use every taekwondo lesson he’s ever learned and launched a 30-yard bicycle kick from the heavens to silence England once and for all. Sweden went on to win 4-2.

Haters might be wondering why Carli Lloyd is on this list, but the fact is, this goal is wildly impressive, and not just for women’s soccer. The US was playing Japan in the 2015 World Cup Final, four years after their defeat to that very team. Lloyd’s hattrick goal that game will go down as one of the greatest goals in World Cup final history when she lofted in a wondergoal from the midfield line. I chipped a keeper in my indoor game once from half field, so I can only imagine that feeling she had that day.

7. Troy Deeney Wins It For Watford

This goal is quite possibly the best ending to a match I’ve ever seen. In the final seconds of the 2013 EFL Championship playoff semifinal with the aggregate score tied 2-2, Leicester City was awarded a penalty that would surely win them the game. Mind you, it looked like quite the dive. What happened next was pure Hollywood fantasy. Watford goalkeeper Almunia (Al-moon-ya) made a terrific double save and within 20 short seconds, Troy Deeney rocketed in the winner for Watford with a commanding volley at the other end sending Watford through to play in the final at Wembley!

Arsenal scores so many pretty goals, but for peak Wenger-era team goals, it doesn’t get any better than this one in 2013. Santi Cazorla, Olivier Giroud and Jack Wilshere combined for six passes and one shot in five seconds, including five sublime one-touch passes. Four Norwich defenders became spectators and could only watch on their way to being relegated.

Next up we have that free kick, arguably the most famous in the history of free kicks. Roberto Carlos shocked fans, and physicists, around the world with an unreal shot against France during a 1997 friendly. The swerve is just mind blowing. Look closely and you can see the photographer next to the goal move away, thinking the ball is going to hit him. Roberto Carlos once said the wind could have helped him, but shhh! Let's not ruin the magic.

Olivier Giroud has won the World Cup and the Champions League, but he’ll always be best remembered for this ridiculous goal that won the 2017 Puskás Award while with Arsenal. I don’t even need to say anything about this goal beyond “Olivier Giroud scorpion kick.” Stupid… sexy… Giroud.

Scoring the game-winner in a Champions League final makes you a legend, but what if that goal is also one of the best in history? That's the recipe for Zinedine Zidane’s iconic volley in 2002 that won the title for Real Madrid.

With the score level at 1 against Bayern Leverkusen, Zidane uncorked one on with his supposedly “weaker” foot sending it into the top corner on the stroke of halftime. What does the perfect union of mind and body look like? This.

Bring out your perms, mullets and power rock ballads for number 3, we’re going back to the 80’s. Dutch legend, and three-time Ballon d’Or winner, Marco van Basten scored some great goals in his career, but this might just be his best. This iconic goal for Ajax in 1986 is the definition of a perfect bicycle kick. The form, technique, body position and shot placement is all *chef’s kiss* magnifique.

What were you doing when you were 19 years old? I guarantee it wasn’t taking on an entire defense and scoring one of the most iconic goals in history. In 2007, Lionel Messi went on a dribble quest for the ages, mimicking another famous goal and beating Getafe’s entire defense and goalkeeper in the process. If you say the term “Encara Messi” real soccer fans will know exactly what you’re talking about.

And that brings us to our best goal of all time, and the most wonderful goal scored in a World Cup. It is Maradona in full display against England, collecting the opponent's souls with his nimble legs and the swerve of his Bombonera hips. And oh the speed! To score a goal like this against such bitter rivals and in a World Cup knockout match is stuff dreams are made of.