Connor Fleming February 10, 2021
Steffen and Morris both got starts for their respective sides; Paul Arriola came off the bench.

An FA Cup last-16 tie between Premier League leaders Manchester City and Championship promotion hopefuls Swansea took on significant importance stateside on Wednesday as USMNT No. 1 Zack Steffen started in goal for City while Seattle Sounders loanee Jordan Morris got his first Swansea start and D.C. United loanee Paul Arriola made his debut off the bench.

There’s something incredibly fascinating about Morris with Swansea as the 26-year-old has had glittering success throughout his career, but that career has taken place in North America after turning down a Werder Bremen offer at the age of 21.

Playing Manchester City is a far cry from what Morris has experienced in MLS, where his Sounders team has reached the MLS Cup final four times in five seasons. His performances reached a personal peak this past year with 10 goals and eight assists in 22 games, resulting in his first MLS Best XI selection. The consensus is that Morris is more than ready for this opportunity.

Here’s our live coverage of the duo we affectionately refer to as Sweet Cherub Boy and Nipple David Beckham attempting to take down Pep Guardiola’s billion dollar project.

(Also known as the FA Cup Fifth Round) 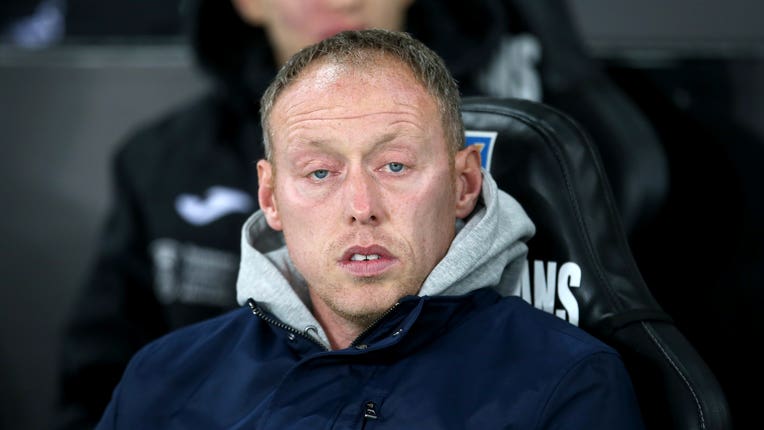 "You ain't gettin out of here alive, boy."

5’: Taylor Twellman is defending Guardiola from critics that don’t really exist (unless you count Twitter users with profile pictures of Bruno Fernandes).

8’: Morris is sat inside Swansea’s half, applying a bit of pressure to Aymeric Laporte and Eric García near the halfway line.

9’: Perfect example of what Morris’ assignment is: The Mercer Island native stays high and collects the ball behind City’s backline out wide on the counter. He picks the right option in cutting it back, but he can’t find a late arriving teammate and City clears the pressure. A real hint of danger there.

20’: Morris is on the ball! A teammate plays one with too much weight as Morris tries to streak through the channel, but he recovers possession and keeps it near the corner before recycling it.

30’: Kyle Walker’s cross into the corridor of uncertainty leaves the hugely talented Freddie Woodman all sorts of uncertain. It creeps all the way through for the opener.

32’: SWANSEA HEADER GOES WIDE! That’s a great chance, but Zack Steffen probably would’ve pulled off a miracle save to claw it out anyway.

39’: Manning in possession. He swings, misses, falls over and the ball goes out for a City throw-in.

43’: Morris sneaks in and takes it off Kyle Walker. The ball ends up with Manning, but he puts too much weight on his pass back to Morris, forcing him out wide.

44’: Manning, looking for Morris, pings it straight out of bounds. Can we get someone else playing behind JmoSmooth?

HT: City with 74% possession. They’re hitting passes at a 94% clip, out-passing the Swans 365 to 97. Morris had 10 touches, completed eight of nine passes and looked decent enough. Swansea fans have to be excited by his pace.

47’: Well that’s game. Swansea turns it over inside its own half. Rodri takes possession, spots Raheem Sterling in space and threads it through. It’s an easy finish for City’s skipper.

50’: The pressure keeps coming and it’s 3-0. Swansea attempts to build from the back and it doesn’t work. At all. Ultimately it’s a nice turn and finish from Gabriel Jesus.

54’: The man in the iron mask whistles a long-range volley over.

64’: City's stroking it around with ease. Steffen with an instance of good composure and distribution under pressure.

65’: It’s a quadruple substitution for Swansea! Paul Arriola is on for his Swansea debut, but Morris, understandably, comes off.

Morris could frequently be spotted sprinting after a runner deep into his own half while alternatively sprinting the other direction in an attempt to get on a hopeful pass forward. He didn’t record a touch in the second half, such is City’s dominance this period.

77’: Arriola gets on the ball and maintains possession before working it out wide to Manning. He gets his service right this time, picking out Morgan Whittaker in the area. We wanted the Steffen clean sheet, but there’s no saving this strike that nestles inside the bottom-right corner.

A sweet first goal for @SwansOfficial

FT: That’s it. City wins 3-1 while keeping 74% possession and completing 732 passes compared to 205 for the Swans. Arriola actually finishes with more touches touches (11) than Morris (10) despite only getting 24 minutes. Arriola completed six of eight passes. Steffen didn’t record a save, but there was nothing he could do about the goal.