Who's going to win the World Cup? The latest odds show the favorites and dark horses 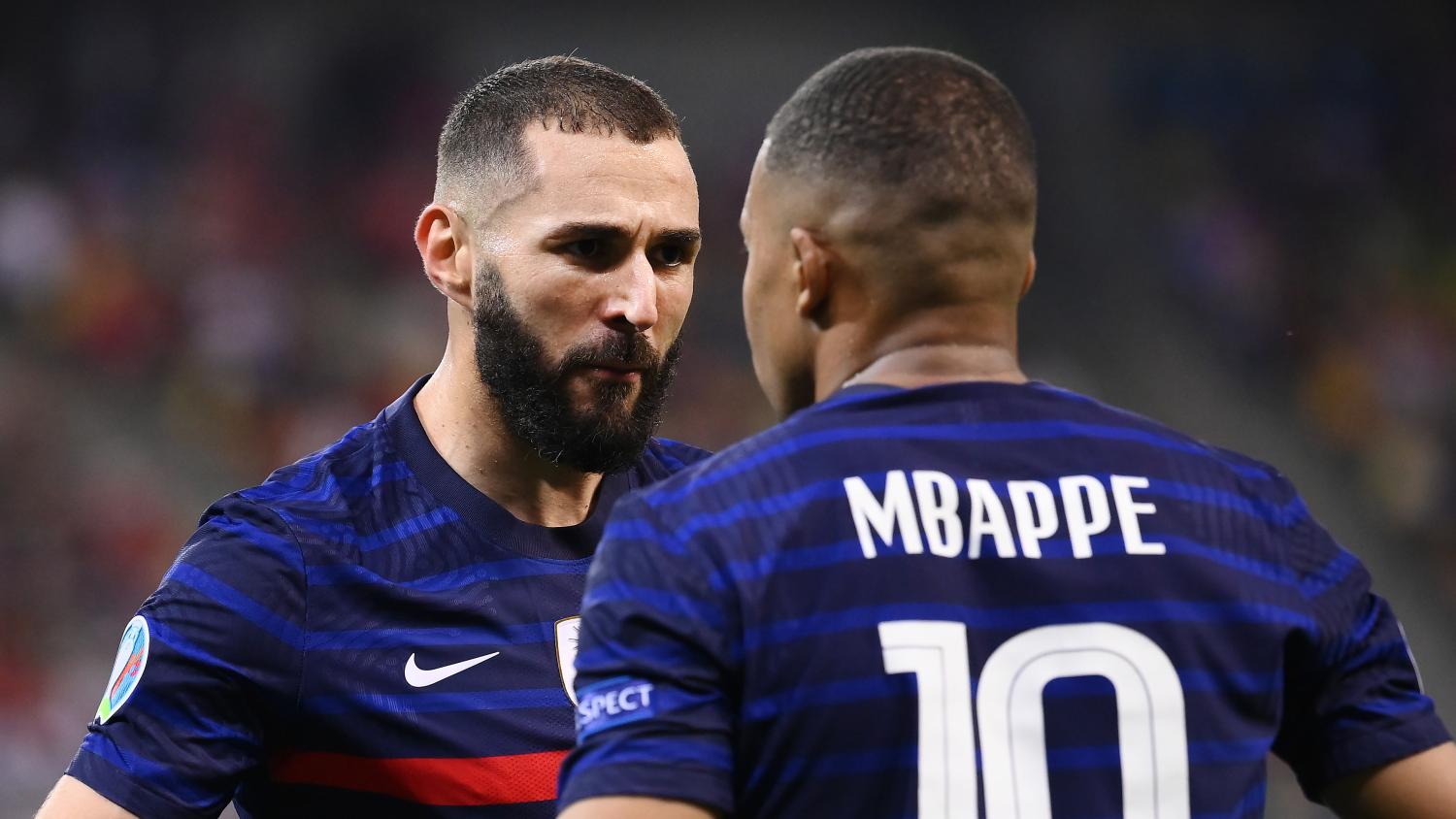 Canada might be your ticket out of this town.
Getty Images

The 2022 FIFA World Cup in Qatar begins Sunday, Nov. 20, with the curtain-raiser at Al Bayt Stadium between the host nation and a fortunate Ecuador. Why's Ecuador so lucky? Because, as the latest World Cup odds 2022 show, Qatar is by far and away the worst seeded team in the eight groups.

With the tournament days away, there's a growing consensus on the teams and players expected to shine. Here we'll look at the favorites, contenders, dark horses, underdogs, Cinderellas and the nations that need a miracle.

These are the latest World Cup 2022 outright winner odds from BetMGM.

With five World Cups, no team has won the tournament more than Brazil, but it's been 20 years since the last title. However, this is arguably the Seleção's most effective squad since 2002. Brazil's contested back-to-back Copa América finals (winning in 2019) and made it through the notoriously difficult Conmebol qualifying process without tasting defeat (17 wins, three draws, 40 goals scored and only five allowed).

The defending champion, France navigated its qualifying group without defeat thanks to the three-headed monster that is Kylian Mbappé, Karim Benzema and Antoine Griezmann (combined for 14 of France's 18 goals). Detractors will point to Les Bleus' early Euro exit as a sign of weakness — where they threw away a 3-1 lead with less than 10 minutes remaining to Switzerland — but the team recovered nicely to win the 2021 UEFA Nations League.

Lifting the 2021 Copa América finally got the thirty-five pound monkey off Lionel Messi's back, but that won't dampen the 34-year-old's desire for one final crowning glory. La Albiceleste's 2018 squad was too top-heavy, so the midfield has been retooled into a formidable unit while Lautaro Martínez has emerged as the perfect striker to work with Messi.

Fourth-place finishers at the 2018 World Cup and runner-up at Euro 2020, England expects nothing less than to take the final step in 2022. The Three Lions made easy work of qualifying, winning eight and drawing two while Harry Kane finished as joint-top scorer across Europe with 12 goals.

A disastrous elimination at the hands of Russia in 2018 marked a changing of the guard for Spain, but nobody expected the younger generation to slide in so seamlessly. La Roja exceeded expectations in reaching the Euro semifinals, and then they had France on the ropes in the Nations League final. The revolution has its roots in Barcelona, where Gavi, Pedri, Ansu Fati, Eric García and Ferran Torres are all developing nicely.

Germany said goodbye to longtime manager Joachim Löw after an early exit at the Euros, but former Bayern Munich coach Hansi Flick immediately revived Die Mannschaft as they became the first nation to qualify for Qatar. The goals came from a variety of sources in qualifying (Serge Gnabry, İlkay Gündoğan, Timo Werner, Leroy Sané, Kai Havertz and Thomas Müller), highlighting the variety of ways in which this team can destroy you.

The Dutch return to the fold after missing out on the 2018 tournament and are now led by Louis van Gaal, the man who guided them to a third-place finish in 2014. The 70-year-old recently revealed he's battling prostate cancer but will continue in the role through the World Cup.

The Netherlands navigated a difficult qualifying group with Turkey and Norway, and there's a strong spine here with Virgil van Dijk and Matthijs de Ligt in the back, Frenkie de Jong in midfield and Memphis Depay in attack.

Belgium had been ranked No. 1 in the world for almost four years until Brazil took its "crown" in March, and the third-place finishers at the 2018 World Cup regressed with a quarterfinal exit at Euro 2020. Kevin De Bruyne is a midfield genius, but what kind of form will Eden Hazard, Romelu Lukaku and Dries Mertens bring to Qatar?

Cristiano Ronaldo's fifth World Cup is the headline, but he's certainly no one-man band with many of his teammates — including Bernardo Silva, Rúben Dias and Rafael Leão — all playing exceptionally well for their club sides.

After the horrifying collapse of Christian Eriksen at the Euros, Denmark captivated the globe with its run to the semifinals. The Danes showed that was no fluke by reeling off nine consecutive wins in qualifying to become the second nation (after Germany) to qualify. What's more, Eriksen's back and quickly recapturing his best form. He'll be in Qatar.

The 2018 runner-up lost Mario Mandžukić and Ivan Rakitić to retirement, but 36-year-old captain Luka Modrić hasn't aged a day in four years and 33-year-old Ivan Perišić is still as willing and committed as ever. The team can still play with anyone on its day, but those days are now fewer and further between.

It wasn't straightforward, but Uruguay finished third in CONMEBOL behind Luis Suárez's eight goals. His 35-year-old strike partner Edinson Cavani only got two, but 27-year-old Flamengo attacker Giorgian de Arrascaeta emerged as a true threat for la Celeste with five of his own. The nation's new star is Real Madrid's Federico Valverde — he technically plays in midfield but he's everywhere.

The African champions got by Mohamed Salah's Egypt in a penalty shootout to qualify, and expectations will rightfully be high for Sadio Mané, Kalidou Koulibaly, Idrissa Gueye and Édouard Mendy in Qatar.

Switzerland condemned Italy to its doom by recording two draws with the Azzurri and taking care of business where the Italians failed. Granit Xhaka, Xherdan Shaqiri and Yann Sommer provide the veteran leadership, Breel Embolo and Denis Zakaria the hope of even better things to come.

The USMNT approaches the tournament leaning on a group of young, exciting players that've never experienced a World Cup before. That kind of squad served the U.S. well in 2002, but there's no telling how the likes of Christian Pulisic, Weston McKennie, Brenden Aaronson, Sergiño Dest and Gio Reyna will fare with all of America tuned in.

Serbia's the reason Portugal had to navigate the playoffs, and nations should be genuinely terrified of striker Aleksandar Mitrović, who scored eight goals in qualifying, smashed the single-season Championship scoring record with Fulham and is now lighting up the EPL.

Mexico's squad was momentarily viewed as primed, battle-hardened and ready for the "quinto partido," but after losing finals in the Nations League and Gold Cup and generally looking like the third-best team in Concacaf in qualifying, that narrative shifted. The squad now seems to be in the midst of an awkward transition, but Tata Martino is adamant the worst is now behind El Tri.

Two-time Best FIFA Men's Player Robert Lewandowski is the greatest goalscorer on the planet right now, and he'll be hugely motivated to make his mark after going goalless at the 2018 World Cup.

Gareth Bale guided the Dragons to a first World Cup appearance since 1958, and now he'll probably score a hat-trick against the USA.

Ecuador was a tough out in CONMEBOL — La Tri allowed just 19 goals in 18 games. The squad will be familiar to North American viewers with Ángel Mena (León), Michael Estrada (D.C. United), Sebas Méndez (Orlando City) and Ayrton Preciado (Santos Laguna), among others in Liga MX and MLS.

Qatar has essentially undergone a 12-year process to get its national team ready for the World Cup. Back when it was awarded the tournament in 2010, Qatar was ranked 113th on the planet. They've since risen to 51st with a squad of players that's hugely familiar together (they almost all come from either Al-Sadd or Al-Duhail in the Qatar Stars League), while winning the 2019 Asian Cup and reaching the semifinals of the 2021 Gold Cup as a guest. Still, they're not expected to beat the Netherlands, Senegal or Ecuador in group play.

After missing 2018, Ghana is back after defeating a very talented Nigeria squad in the CAF playoffs. The Ayew brothers still run the attack, and Thomas Partey brings back the box-to-box style of former captain Stephen Appiah.

A famous 2-1 win in Algeria punched Cameroon's ticket and marked a dramatic beginning to Rigobert Song's reign. The 45-year-old earned 137 caps for the Indomitable Lions during his playing career, and he'll need great performances from veterans like Vincent Aboubakar and Eric Maxim Choupo-Moting to survive a difficult group with Brazil, Serbia and Switzerland.

Japan punched its ticket with an impressive 2-0 victory over Australia in Sydney, and the Samurai Blue have some great attacking talent in Liverpool's Takumi Minamino and Mallorca's Takefusa Kubo.

This is where the smart money is. Alphonso Davies and Jonathan David emerged as two of Concacaf's best players, and an unprecedented level of depth was highlighted at the 2021 Gold Cup when their "B team" made a run to the semifinals. No nation can underestimate Canada and get away with it.

An underrated side with star power in PSG's Achraf Hakimi and Sevilla's Munir El Haddadi, but it's a tough group with Belgium, Croatia and Canada.

A single own goal lifted Tunisia over Mali in the CAF playoffs to qualify, and it's Group D with France, Denmark and Australia for the Eagles of Carthage.

Australia beat the UAE and then Peru to get in, but the reward is getting torched by Mbappé.

No Chance In Hell

Iran became the first country to qualify out of Asia by recording seven wins and one draw from its opening eight matches. Their leading scorer in qualifying was Porto striker Mehdi Taremi, who's enjoying another monster season.

Saudi Arabia had an impressive qualifying campaign, finishing above Japan and Australia, but Argentina, Mexico and Poland are the group foes. Nope.

CONCACAF's fourth-place finisher beat New Zealand to get in, and los Ticos finished "The Ocho" with six wins and one draw over the final seven games, but they're about as old the World Cup itself.

If you are worried about signs and symptoms of compulsive gambling, The National Council on Problem Gambling has a confidential 24 hour helpline that can be reached at 1-800-522-4700.