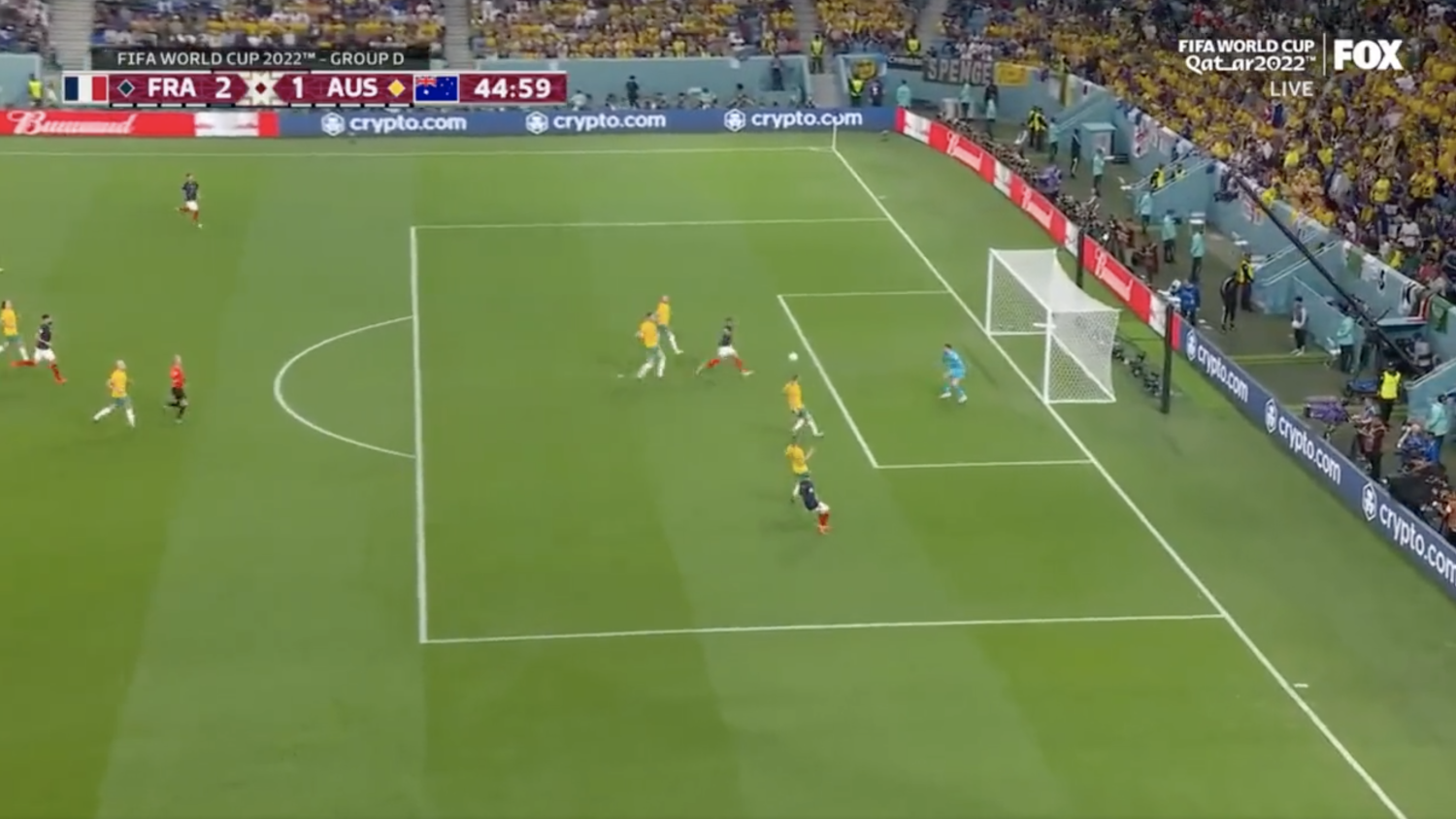 Good to know even Mbappé can screw things up.
@FOXSoccer | Twitter

Kylian Mbappé was his silky brilliant self on Tuesday during France’s 4-1 victory against Australia. That is except for one moment in the 45th minute when a shockingly uncharacteristic Mbappé miss took place.

Antoine Griezmann found space down the right flank and put in a peach of a ball that Mbappé couldn’t control. 99 times out of 100 you would bet that Mbappé scores that chance and wheels away to cross his arms in celebration.

Tuesday was a truly bizarre day of soccer with Argentina losing to Saudi Arabia, Tunisia getting a draw vs. Denmark and Australia having a lead on France for 18 minutes. Perhaps Mbappé missing from point blank was on theme for the day.

That 18-minute lead for the Socceroos happened courtesy of a Craig Goodwin goal in the 9th minute. The goal was only Goodwin’s second international goal in his eighth appearance for Australia.

During the build-up to the goal Lucas Hernandez suffered a knee injury. He’s the latest French player to pick up an injury. Karim Benzema, Paul Pogba, N’golo Kanté and Christopher Nkunku are all missing the 2022 World Cup due to injuries.

Adrien Rabiot, who infamously refused to be on France’s standby list for the 2018 World Cup, got the French back on level terms with a composed header in the 27th minute.

Rabiot would get the assist on France's second goal five minutes later. After picking the pocket of an Aussie player he would find Olivier Giroud for a tap-in.

Also, what a clever backheel from Mbappé.

He scores his 50th goal for France and puts Les Bleus out in front! pic.twitter.com/MDzBWoDJOI

Mbappé redeemed himself in the 68th minute with a headed goal off the post and then an assist to Giroud in the 71st.

MBAPPE SCORES HIS FIRST GOAL OF THE 2022 FIFA WORLD CUP

With this goal he ties Thierry Henry for the most goals in France men's national team history pic.twitter.com/3GOz3FqUrF

Giroud is now tied with Thierry Henry with the most international goals for France (51).