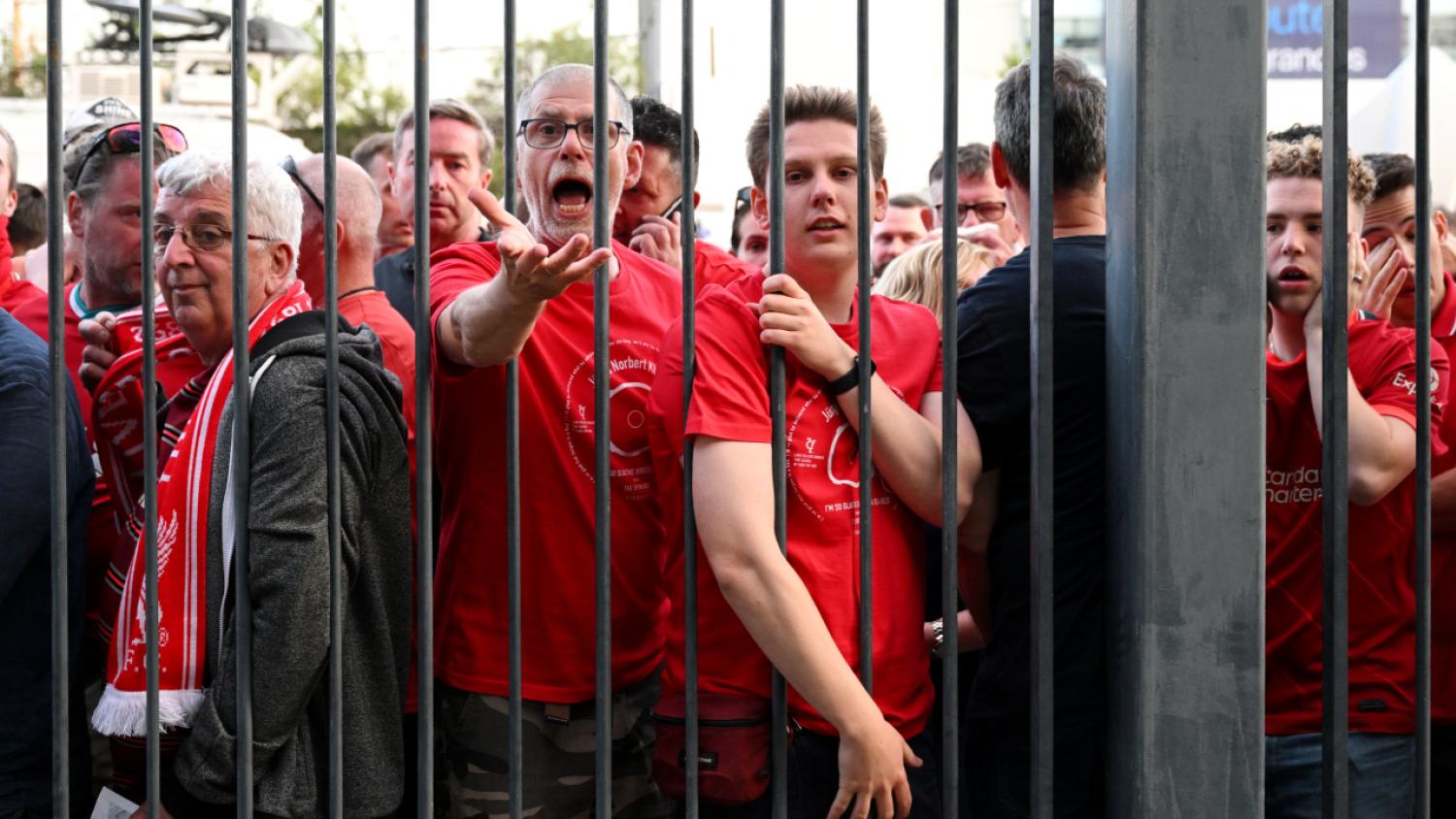 The Stade de France was a troubling scene with Paris set to host the Olympic Games in two years.
Getty Images

PARIS - Chaotic scenes at the French national stadium before and during Saturday night's Champions League final were branded a national embarrassment, while French ministers blamed Liverpool fans for the trouble.

The final between Liverpool and Real Madrid kicked off with a 35-minute delay after police tried to hold back people attempting to force their way into the Stade de France without tickets, while some ticket holders complained they were not let in.

Television footage showed images of young men, who did not appear to be wearing the red Liverpool jerseys, jumping the gates of the stadium and running away. Other people outside, including children, were tear-gassed by riot police, a Reuters witness said.

Some riot police officers stormed into the stadium while others charged at people trying to knock down stadium gates.

We have found over 30-40 French youths in the C and D blocks of the Stade de France who have stormed the stadium. This is not the fault of Liverpool fans. #bbcnews #bbcfootball#championsleague @liverpoolfc pic.twitter.com/NWlxrWLlZ4

European soccer's governing body UEFA blamed fake tickets for causing the issue and said it would review the events together with the French authorities and the French Football Federation, in a statement welcomed by the British ambassador in Paris, Menna Rawlings.

"We need to establish the facts," Rawlings tweeted, adding her "commiserations" to Liverpool after a "valiant performance" in their 1-0 defeat by Real.

"Thousands of British 'supporters,' without any ticket or with fake ones have forced their way in and, at times, used violence again stadium staff," Interior Minister Gerald Darmanin said on Twitter, thanking French police.

"The attempts at intrusion and fraud by thousands of English supporters complicated the work of the stadium staff and police but will not tarnish this victory," Sports minister Amelie Oudea-Castera tweeted.

Liverpool CEO Billy Hogan said the treatment of their fans was "unacceptable" and that the club wanted a "transparent investigation" by UEFA.

"We are intent on ensuring that there is an independent investigation and we, as the club, will be absolutely part of that and be co-operative," Hogan said in a video message on Sunday. "We understand that there were a lot of different experiences that took place over the course of the evening and it's imperative that we hear from supporters. We want to make sure we get the facts and provide those facts to the relevant authorities... over the course of the coming days, we will be setting up a mechanism for supporters to reach out to us directly."

"The footage and accounts from Liverpool fans and the media on their entry to the Stade de France last night are deeply concerning," Dorries said in a statement issued by the Department for Digital, Culture, Media and Sport (DCMS) on Sunday. "I urge UEFA to launch a formal investigation into what went wrong and why, in coordination with stadium staff, the French Police, the (French football federation), Merseyside Police and Liverpool Football Club. It is in the interests of everyone involved to understand what happened and to learn lessons from these events."

I came across this issue repeatedly as I tried to access the stadium last night. Locals trying to force their way in leading to security closing the gates and keeping out legitimate fans with tickets. Police either didn't know how to deal with it or didn't want to #LFC #UCLfinal pic.twitter.com/JZyexADoMa

Some 68 people had been arrested by 1:20 local time on Sunday while there were 238 interventions by medics for people who were very lightly injured, Paris police said in a statement.

UEFA issued a statement late on Saturday saying: "In the lead-up to the game, the turnstiles at the Liverpool end became blocked by thousands of fans who had purchased fake tickets which did not work in the turnstiles."

Liverpool Football Club also issued a statement, saying: "We are hugely disappointed at the stadium entry issues and breakdown of the security perimeter that Liverpool fans faced. We have officially requested a formal investigation into the causes of these unacceptable issues."

The scenes at the stadium caused outrage in France, with politicians of all sides calling it a national disgrace.

"This a shame for France!", Nicolas Dupont-Aignan, a hard-right former presidential candidate, said on Twitter.

Even some in French President Emmanuel Macron's camp lamented the events, which occurred two years before Paris hosts the Olympic Games.

"Scuffles at the Stade de France, brawls in bars, green spaces turned into trash... One observation: we are not ready for the Paris 2024 Olympic Games," Nathalie Loiseau, a European lawmaker in Macron's party said on Twitter.