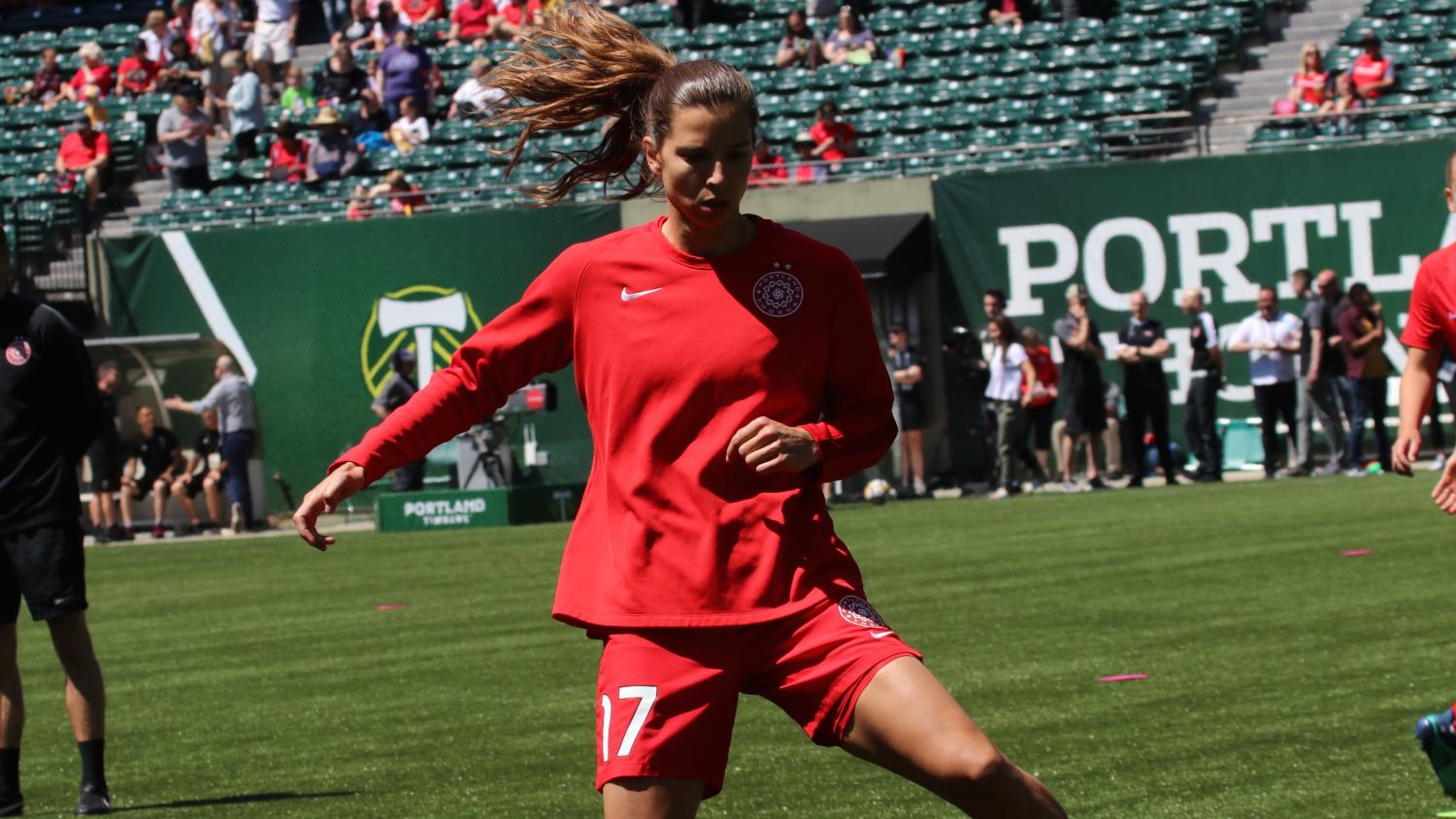 Tobin Heath spoke with us about her unique skill set, the USMNT, the men’s World Cup and that implausible goal she scored against China.
Shutterstock.com

Tobin Heath is like a lot of Americans this summer — watching a World Cup without the U.S. Men’s National Team for the first time in her life.

In the midst of her sixth season with the NWSL’s Portland Thorns, Heath is keeping a close eye on the men’s World Cup in Russia. The USWNT winger said it’s terrible the U.S. failed to qualify for the 2018 World Cup, but she hopes it can turn into a positive opportunity for U.S. Soccer.

“For me I’ve only known the World Cup with the U.S. in it, so obviously it’s a little strange,” Tobin Heath told The18 this week. “I think it’s maybe what we needed as a country to revamp what we’ve got going on in the soccer world here and prepare for what lies ahead for our national team.

“As much as it hurts, I hope it will help in the long run.”

Tobin Heath knows a thing or two about the World Cup. She was a regular on the USWNT squad that won the 2015 World Cup. The 30-year-old has 133 caps to her name, having scored 19 goals for the red, white and blue.

After the U.S. men failed to qualify for the 2018 World Cup, Heath saw a lot of fingers pointed in various directions at U.S. Soccer. While she recognizes the slimmest of margins by which the U.S. men missed the World Cup, she saw it as an opportunity to take a broader look at U.S. Soccer and what can be done to improve the state of the game in the country, starting with making soccer more available and cost-effective.

“I think it comes down to culture and the fact that we aren’t the standard sport in America compared to most countries and therefore we don’t get the best athletes and best opportunities to succeed,” Heath said.

“But I think soccer in this country can be huge. I think what we want as a federation is to take this moment not qualifying to revaluate a lot of the institutionalized soccer avenues of getting to the national team that need to be addressed and need to be changed and need to become more available to all people so we can make that jump that we so desperately want and need as a country.”

One key aspect that stands out for for Heath is the lack of development of certain types of players. In particular, the U.S. needs to develop more creative, visionary players who are willing to try to dribble past opponents.

Heath is the rare breed of American soccer player who has a whole bag of tricks and isn’t afraid of using it. Whether it’s a Cruyff turn, clever backheel or nutmegging the crap out of anyone and everyone, Heath is one of the country’s most skilled players, man or woman.

So how does the U.S. men’s team produce players like Heath?

“I think we need to embrace the individual,” Heath said. “I think a lot in America — and we see this in our education — we generalize things. We want everyone to be good at everything. We don’t embrace the specialty of players and skill sets.

“I think therefore for a player to reach the highest level they almost have to be skilled in every asset of the game instead of someone being a special talent.”

As Heath points out, there are 11 players on the pitch at a time for each team, giving ample room for a variety of players. Teams (coaches, schools, academies, etc.) shouldn’t just look for the all-around talent who can do it all, but develop those whose skills might fall outside the bigger, stronger, faster paradigm.

“I think too much we look for these cookie-cutter players,” Heath said. “I think that also comes down to the staff and the way that us as Americans quantify and qualify players.

Tobin Heath, of course, has done it at the highest level, scoring in the 5-2 win over Japan in the 2015 World Cup final. She recently returned to the national team after a lengthy layoff following a disruptive ankle injury.

Heath hadn’t played for the USWNT since September when she returned in a 2-1 victory over China on June 12.

“It was amazing, kind of a long time coming for me. Just to be back on the field in the red, white and blue was great,” Heath said. “To be back with my teammates, back playing an international match was fantastic and I was really stoked about it.”

After missing the start of the NWSL season with the Portland Thorns, she appears to have hit her stride. In the friendly against China, Heath notched the game-winner, albeit a tad fortuitously.

For the record, Heath said she wasn’t trying to chip the keeper with some insane backspin. But the goal was just a sign of the form Heath is rounding into.

“That goal was pretty awesome,” Heath said. “I feel like most of the goals I score are pretty well constructed and thought out and precise. But scoring a goal like that for me was pretty special because it was one of those ones where you don’t hit where you like but it ends up going exactly where it needs to go to score.

“For me it’s always a good sign when stuff like that falls for you. I was pretty thrilled about it because I don’t usually get goals like that.”

Clearly Heath is back to full health and full speed, and for much of that she credits her eyesight. Like many people, Heath didn’t realize she needed corrective lenses until later in life, when she realized how much better she could see with them. She now uses Alcon DAILIES TOTAL1 contacts, which she says have changed the way she sees the field and gives her a new edge.

“It was incredible once I started using them,” Heath said. “And once I started using them, I realized all contact lenses aren’t the same; it was kind of like all soccer boots aren’t the same. … I found out how important it was for me to find the best contact lenses that fit with what I do, which is play soccer in every kind of environment possible.

“Having the comfort level of my Alcon TOTAL1s helps me become more aware and focused in my sport, which I didn’t necessarily know I needed until I found this out. And for me, it’s just an extra tool in my tool bag I’ve got going on.”

Now she’s using those contacts to avidly watch the men’s World Cup, which for her serves as a daily reminder of the USMNT’s failure to qualify. Without the U.S. to root for, Heath is following Brazil, the team that’s part of the reason Heath fell in love with the beautiful game (which may explain her uncanny ability to humiliate opponents).

“That’s my team, especially now that the U.S. isn’t in it,” Heath said of Brazil. “They got off to a bit of a rough start, but I think it’ll be a great tournament for them.”

As for who Tobin Heath thinks might win it all, Brazil is in her heart, but it’s too tough to tell, especially with all of the upsets so far.

“The thing about football is that it’s not just about quality,” Heath said. “Obviously it gives you a little bit of an edge, but at the end of the day so much is about luck and favor and things going your way, so that’s why it’s such a special tournament.

“So who knows. We all thought it was such a top-heavy tournament but I think in the first round it’s changed a lot of people’s opinions about what this World Cup is going to be about. I think we’ll see in the next few days what’s going to happen.”