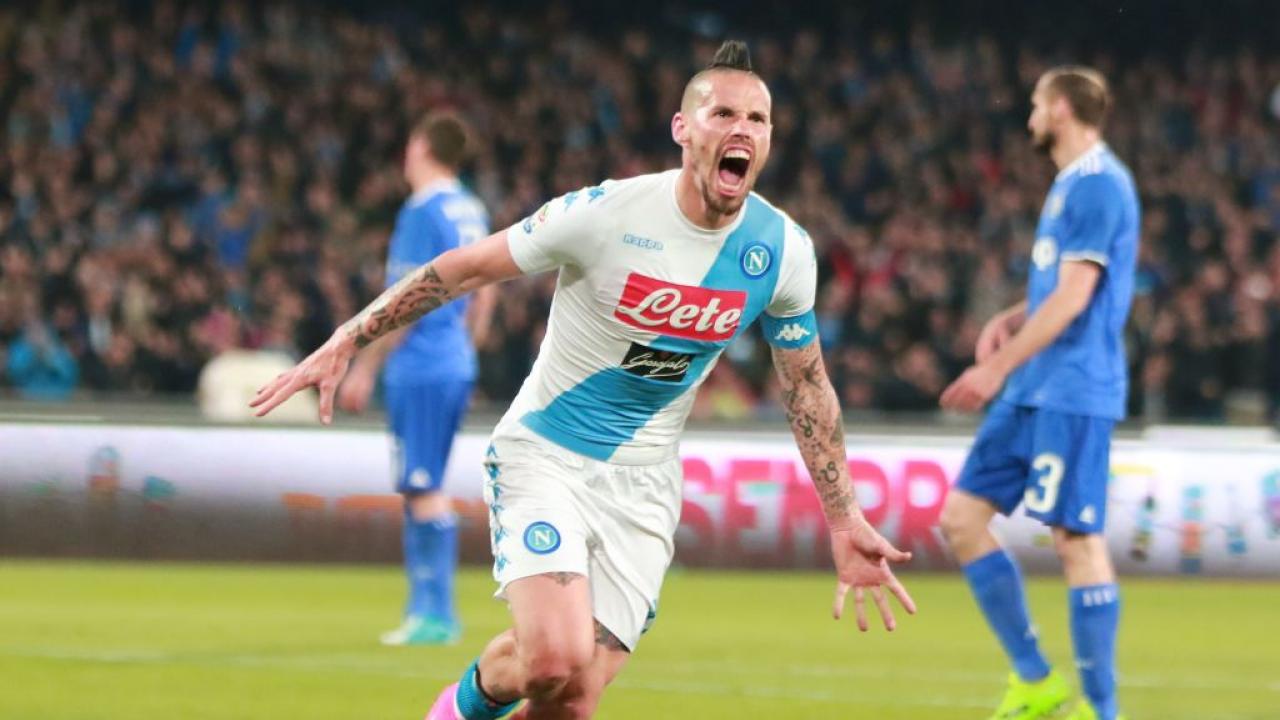 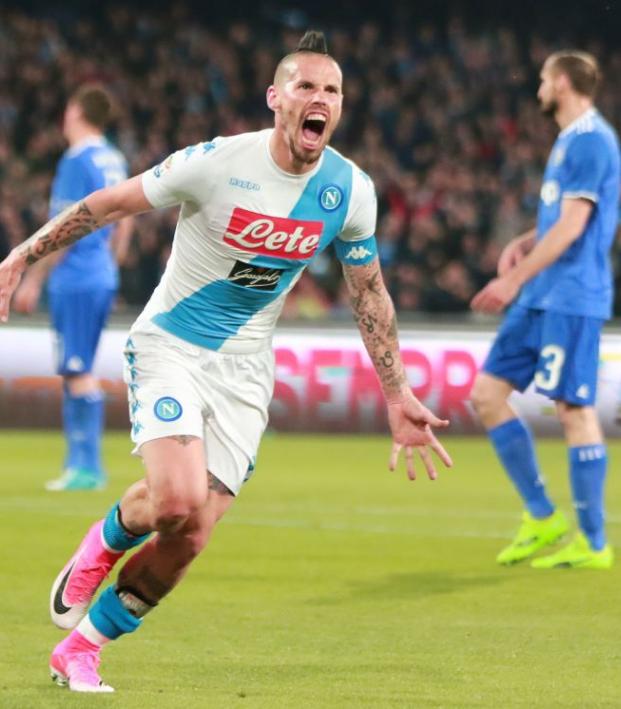 There Is No Love Lost For Gonzalo Higuain In Naples

Huw Thomas April 3, 2017
All eyes were on Gonzalo Higuain and the combustible crowd as Juventus travelled south to play Napoli

In Naples, they have a book for interpreting dreams. La Smorfia, translated as "the Grimace," provides the user with guidance, teaching them to take their night time adventures and turn them into a series of numbers. You can then use these numbers to play the lottery. For instance, should you dream of Italy or of God, then you should pick the number one. If you dream of a deranged person, then number 22 is particularly auspicious.

If you have a nightmare, then you should be selecting the number ninety. Using your dreams, you can predict the future.

If you ask people around Naples about La Smorfia, then you’re likely to get a few responses. Most will know one or two numbers. Those who spend more time with their grandmothers will know a few more. The people who are more dedicated to the book will be able to tell you the numerical qualities of your dream right away.

But on Sunday night, the entire town converged on the Stadio San Paolo to share a collective nightmare. In the crowd, hundreds of people held a number above their heads: 71. To use the Neapolitan dialect, it’s the number of “l’omm ‘e mmerd”. It translates literally as “the sh*t man”. In regular Italian, it’s “uomo senza valore.” The language is less colorful, but more information. The man without honor. Number 71. On Sunday, the terrible shared dream of the Napoli crowd was Gonzalo Higuain, their man without honor.

Right from the moment the fixture list was released, this match had been first and foremost in the Neapolitan calendar. Such was the acrimony with which the striker left the south to travel north, there was no way he was going to receive a warm welcome. The Ultras were handing out whistles before the match; the stadium announcer shuffled the reading of the Juventus team sheet, placing “l’omm ‘e mmerd” last and allowing the 53,000 to roundly air their grievances.

But there was a sense that the reception was slightly reserved. Of course, at the height of last summer’s hatred, fans were burning shirts, threatening violence, and defacing the adoring street art. The demonstrable viciousness has eased off in recent months — thanks largely to how well Dries Mertens has stepped into the Argentine’s shoes — but Higuain will never be forgiven.

When you factor in the huge lead Juventus have in Serie A, this match was not the title-decider that many had hoped for. There wasn’t much at stake, apart from honor. It was all a bit theatrical.

Nevertheless, the crowd were reaching fever pitch before the game. The whistles were being put to use, the announcer was having fun. In an interview before the match started, Juve full-back Kwadwo Asamoah noted that his teammate seemed quiet and bemused by the spectacle. There was something of this bemusement in the team selection, too.

Juventus are still in the Champions League, Napoli are not. Juventus hold a commanding aggregate lead in the Coppa Italia semi-final against Napoli. They are leaps and bounds ahead in the league. As such, this was not a must-win fixture for the Turin side. They selected a team to take the sting out of the tail, opting to ensure that Paulo Dybala — their best player — had plenty of time to recover after travelling to South America last week.

Allegri selected a combative, forceful side and sat deep. They had nothing particular to fight for, other than frustrating Napoli on all fronts and escaping without injury.

Napoli lined up like they always do: finely-tuned in attack, fearfully fragile in defense. They always have a goal in them at either end, Sarri’s commitment to attacking football resolute enough that the defense is often left stranded as a result. It’s what’s made them the best team to watch in Italy this year, but it’s also the reason why they are third.

It’s also the reason why they were one-nil down within the first ten minutes. Sami Khedira picked up a loose ball in midfield, charged past a few players, exchanged a one-two with Miralem Pjanic and then slotted the ball home. It was far too easy. The crowd, having reached fever pitch, eased off. The sting was very much taken out of the tail. A Juventus team which had been selected to frustrate proceeded to do exactly that.

For the ensuing fifty minutes, including a half-time break, Napoli tested the Juventus resolve. The crowd, rising to the occasion whenever Higuain touched the ball, began to grow into the game. Callejon had a goal (correctly) ruled out for being offside and, in the seconds afterwards, the bellows of the fans rose and fell away. It was a taste of what might happen should Napoli inevitably break down the champions’ defence.

The goal, when it came, was excellent. The Napoli midfield traded passes in Juventus’s final third. They probed and prodded. When Jorginho received the ball, he found his captain, Hamsik. Hamsik played a square ball to Mertens, who danced past Khedira, sliding the ball into the space behind the German, a space which Marek Hamsik had ghosted into.

With all the time in the world and only Buffon to beat, the Napoli captain curled a gorgeous ball into the corner. The fans screamed their appreciation and this time the goal stood.

Hamsik is an interesting player in this context. A remarkable attacking midfielder, he has been a key part of several Napoli sides over the years. He’s had offers to leave and had steadfastly refused. Now, he’s creeping up on the goal tally of Diego Maradona, Napoli’s all-time leading goal-scorer. He’ll pass that mark soon, will pass the appearance record soon after.

He is the very model of loyalty and the Slovakian is accordingly adored in Naples. Contrast him with Higuain and it’s easy to see why 71 is loathed and booed. He is the anti-Higuain, in many respects. That he scored seemed important.

Since their early forays into the Napoli half, and with their goal, Juventus had been content to sit back and absorb pressure. The onus was very much on the hosts. Even after the equalizer, Juventus were perfectly pleased to remain passive. As a result, Napoli continued to bang their heads against a black and white wall. The match finished a goal apiece, though there was no doubt that the home side had tried their hardest to win the game.

As a result, the match seemed almost something of a damp squib. Higuain, so demonised by the disgusted crowd, did not even manage a touch of the ball in the Napoli box. Indeed, he’s only scored once in his last eight games, a cause for concern. But Juventus remain ahead in the table, six points clear of second placed Roma.

What’s more, they’ll be back to the San Paolo in short shift. This Wednesday, the theatre will be putting on a second show. This time, Napoli will be starting at a disadvantage, 3-1 down on aggregate. Should they be able to get the two goals, they’ll be through. But it’s unlikely that Juventus will be so reserved.

While the crowd will have to work themselves into a furore once again, Juventus will continue to chug along, knowing that they have to preserve their fitness ahead of their biggest match of the season: a two-legged European tie against Barcelona.

After all the promise of such a combustible fixture, Napoli fans will be left with a grimace. They created a fearsome atmosphere, saw their team go toe-to-toe against the best side in the country, and helped ensure that the man without honour was kept quiet. But the satisfaction is tempered by their awareness of Juventus’ own, more soaring ambitions. As it happens, the match in the mid-week might be even more interesting — overcome the two-goal deficit and the cup is an eminently-winnable trophy.

But, then again, it might peter out in a similar fashion. Nevertheless, we can rest assured in the knowledge that the Neapolitan crowd will never give their former hero a moment’s rest when he comes to visit. The man without honour knows what Naples thinks of him now.