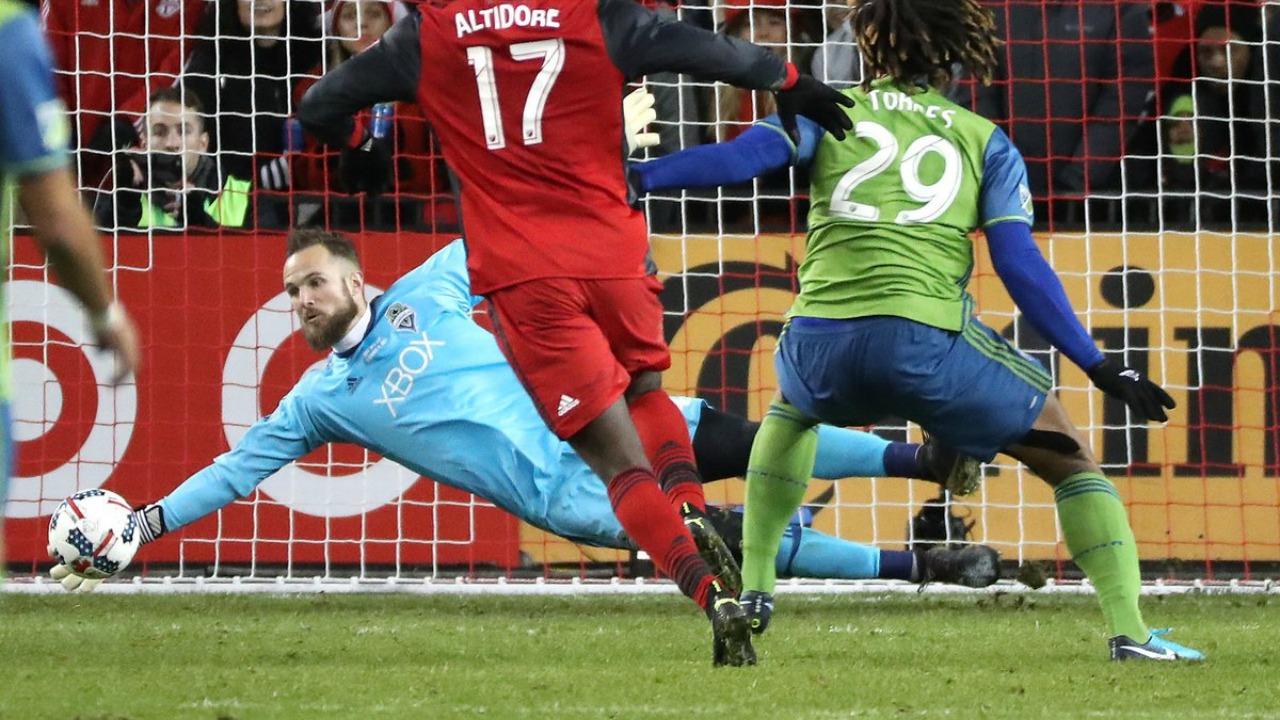 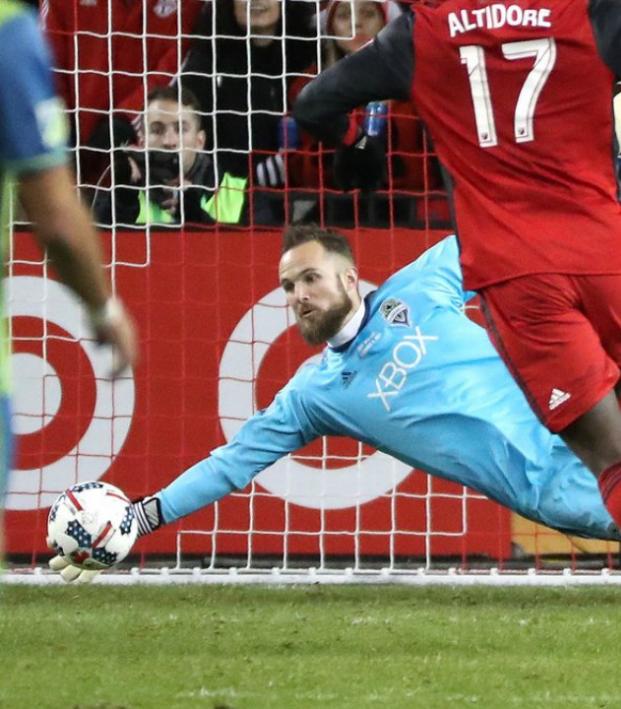 No Player In The U.S. Pool Deserves His First Cap More Than Stefan Frei

Connor Fleming January 3, 2018
In a just world, the Seattle Sounders goalkeeper would make his USMNT debut on Jan. 28 against Bosnia and Herzegovina.

The 2017 MLS Cup Final will be rightly remembered as the crowning achievement on a historic, record-setting season for Toronto FC, but for the second year running, Seattle Sounders goalkeeper Stefan Frei came agonizingly close to writing the script himself — almost literally single-handedly.

The memory of his individual performance on December 9, 2017, against the Supporters’ Shield champions may fade as the lasting image becomes TFC’s superb counter-attacking goal in the 67th minute (bringing an end to a MLS Cup Playoffs record shutout streak of 714 minutes for the Sounders), but one could argue that Frei’s heroics rivaled his own from 2016, when he was awarded MLS Cup MVP for making seven saves (including “The Save” on Jozy Altidore) and stonewalling Michael Bradley in the shootout.

The 2017 Cup final should’ve been over before halftime. The Toronto onslaught began as early as the 10th minute, when Jonathan Osorio sliced a half-volley inside Frei’s near post, but the 31-year-old shot-stopper got a strong hand to it.

One minute later, it was La Masia product Victor Vazquez unlocking the Seattle defense with a cross-field ball onto the feet of Sebastian Giovinco, only for the native of Altstatten, Switzerland, to come out and deny the Italian’s angle.

And this was the save on Giovinco. pic.twitter.com/ZkXeCWkqIB

In two MLS Cup finals, Giovinco, one of the greatest attacking talents in the history of the league, was unable to solve the riddle presented by Frei in goal. That continued in the 23rd minute.

In the 41st, Frei pulled off his best save yet when denying a long-range effort from Vazquez that looked destined for goal.

At the half, TFC had chalked up 63.8 percent of possession and forced Frei into six saves. The Canadian club was winning nearly every duel, every tackle and out-passing their opponents 329-186. Seattle only had Frei to thank for being anywhere near their opponents, and that trend continued in the second half.

In the 60th minute, Frei got behind a venomous half-volley from Bradley that bounced awkwardly in front of the keeper. Then, in the 64th, Frei stonewalled the Atomic Ant again.

Sounders defense has to be better, but Frei is on fire. pic.twitter.com/8pF0uMPVoA

Of course, it would all be for naught. Toronto would scythe through the Seattle midfield only three minutes later with a fantastic counter attack. The move would be deftly finished by Altidore, giving Frei no chance in goal.

In the fourth minute of second half stoppage time, Vazquez would add the second, but the match was already settled — much to the annoyance of Seattle’s goalkeeper. Frei registered nine saves in the game, but his post-match interview made it clear that he had no desire to again be the hero for Seattle. He wanted a Sounder attacker to claim the glory.

“I’m frustrated, disappointed, … disappointed in our performance,” he told reporters after the match. “Toronto deserves to win, there’s no two ways about it. We can only weather the storm for so long. It’s very, very difficult to come into a hostile territory and be the playmaker, I understand that, but it’s been our backbone for the season. It’s been our identity to have possession, to win duels, to wear the opponent down and then for a whole half we’re not doing that.

“We’re barely clinging on for a lifeline and something needs to change. It just never really did. I felt like we were defeated. That’s what’s disappointing, I feel like we accepted defeat. Before they even scored, we accepted the fact of the way the game was being played, and it wasn’t good for us, obviously.” 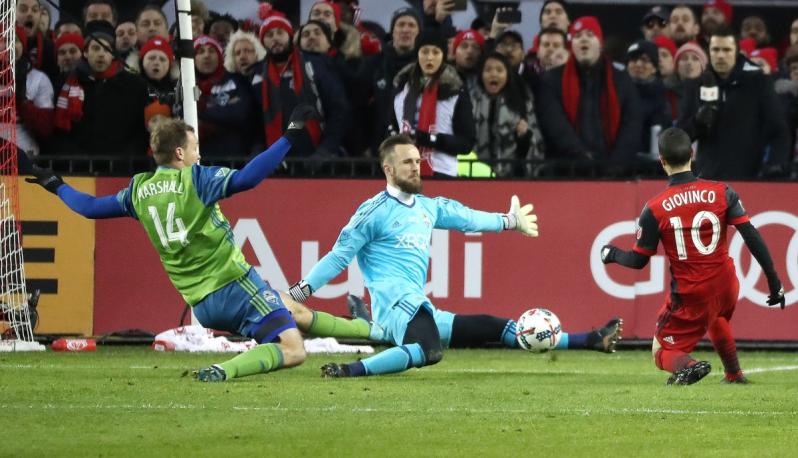 In the end, perhaps the only lasting positive for Frei and Seattle is that the goalkeeper partnered with Allstate throughout the playoffs in an initiative that promised to donate and install two new soccer nets in the Emerald City for every save Frei made.

Who knows, it’s wishful thinking but maybe Frei’s performance will provide the grounds on which the next Seattle native develops a passion for the game, hones his talents and strives to join the Sounders FC Academy. Crazier things have happened.

“I grew up in Switzerland and that’s what we did with every minute that we had,” Frei said with regards to creating fields in the city. “Yes, we were part of an organized team that had training but we also had our fields on the side that we went to whenever we could to go play pickup games. That’s where the love for the sport really grew for me.

"What’s important, before you get into academies and that level of play, is you need to somehow create a connection with those kids and the sport — the passion, the love for the sport needs to grow. It’s important that you have organized sports, but it’s also important that you just have fields where kids can go and play on their own in pickup games and juggling circles.”

On a more personal note, Frei’s performance gave more credence to the opinion that he’s entirely deserving of his first USMNT cap. Frei was called into Bruce Arena’s January Camp in 2017 (an ankle injury forced an early departure), and he then gained his U.S. citizenship in June.

Interim U.S. coach Dave Sarachan will lead this January’s annual camp, which will be comprised of around 30 mostly MLS-based players. The group will finish camp with a friendly match against Bosnia and Herzegovina on Jan. 28, and while the squad has yet to be announced, a first cap for Frei would be fitting and well-deserved.

“I would love to,” Frei said of representing the U.S. “That would be a huge, huge honor. It’s something that I can’t really control. The only thing I can control is how I practice, how I play. Hopefully I get time on the field with the Sounders, and hopefully I can do my best and show my best in those moments. Obviously those are the things I’m focusing on. Like I said, it’d be a huge honor and hopefully that day will come.” 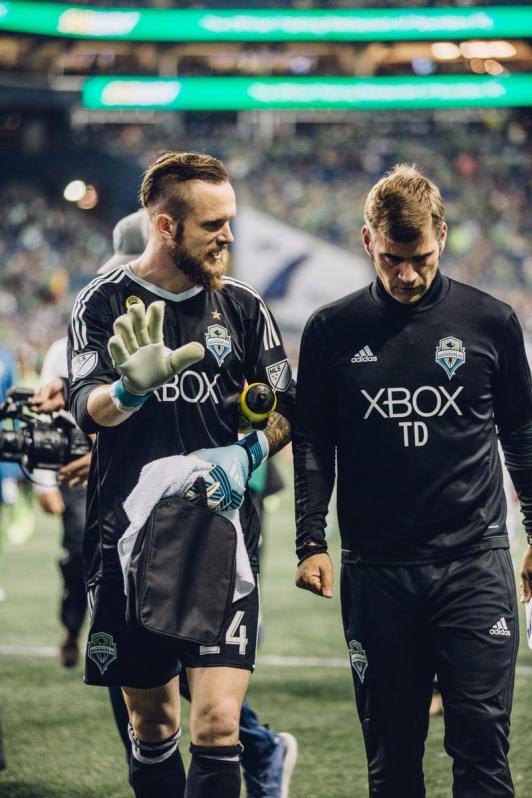 Is a USMNT cap on the horizon for Frei? Photo: @SoundersFC | Twitter

After posting a career best 13 shutouts in 2017 (as well as three more in the playoffs) and featuring for 45 minutes in the MLS All-Star game vs. Real Madrid, there’s really no player in the U.S. pool that deserves it more.