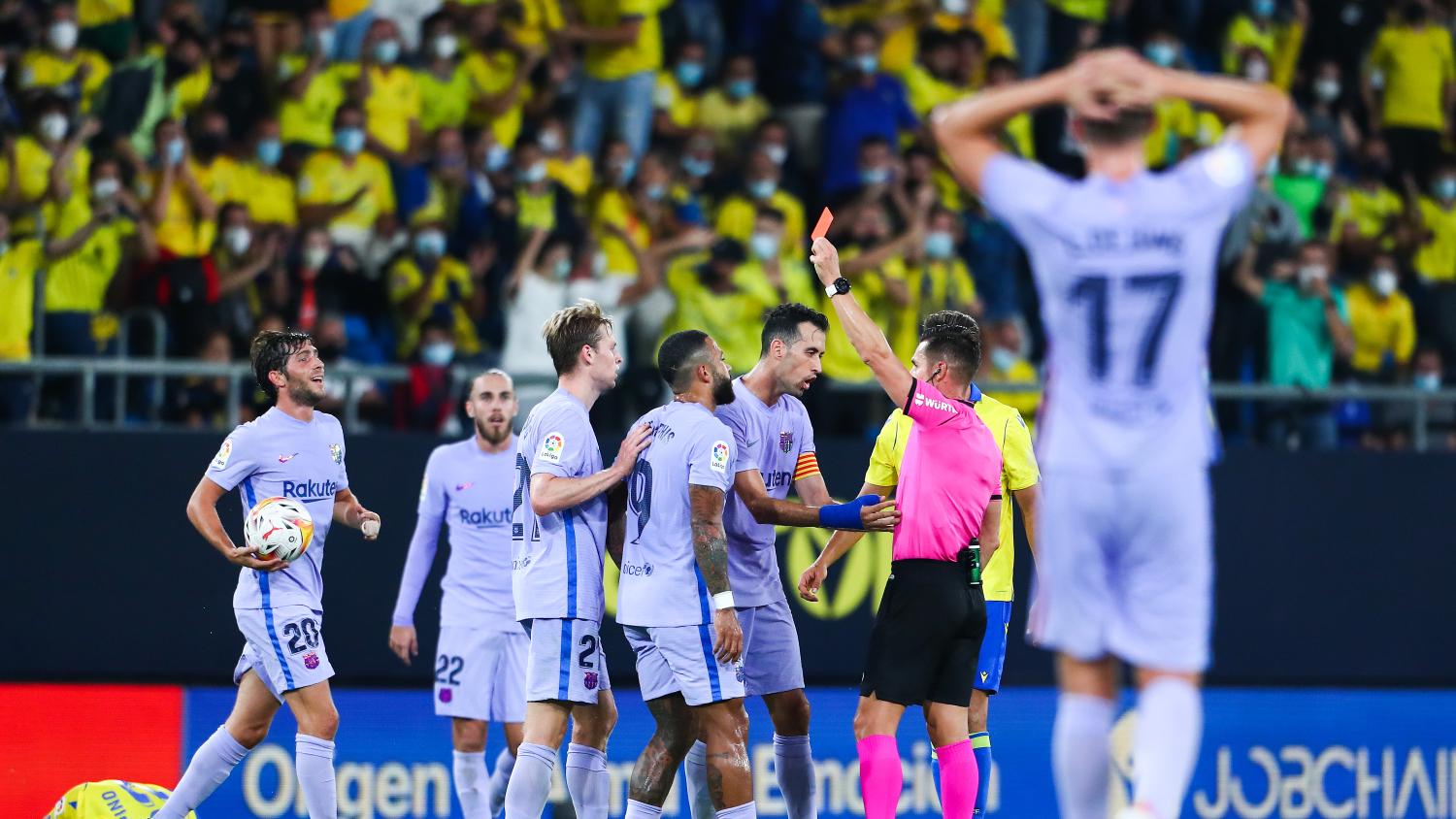 Barcelona had a player and the coach sent off in a 0-0 draw with Cádiz.
Getty Images

Barcelona was always going to struggle after Lionel Messi left. The club was already on a downward trajectory before the legendary No. 10 skipped town, but even ardent Barça fans have to admit this is even worse than they expected. The club reached a new nadir this season when Sergio Busquets kicked a ball at an opponent to stop a scoring chance in the final moments of a 0-0 draw with Cádiz on Thursday.

After Real Madrid trounced Matthew Hoppe’s Mallorca 6-1 on Wednesday, Barcelona sits in seventh place, a full seven points behind its league-leading rival. Just looking at the Barcelona lineup, this club is nearly unrecognizable from the world-beating sides of just a few years ago.

Before Thursday’s match, Cádiz fans outside the Nuevo Mirandilla taunted Barcelona players with chants of “Where is Messi?” It didn’t get much better for Barça once the game kicked off.

Thursday’s match was full of missed chances and unforced errors for the Blaugrana — plus one unfortunate red card that probably shouldn’t have been called and another that may have been deserved.

As one would expect, Barcelona bossed possession (68-32%), but Cádiz outshot the visitors 13-6.

The Blaugrana probably should have taken the lead but for Memphis Depay taking his eye off the ball at the last second for what looked like a certain goal.

How has Depay missed this pic.twitter.com/b5PTzR2jFa

Cádiz became emboldened in the match after three minutes of madness from Frenkie de Jong.

The Dutch midfielder picked up a yellow card in the 61st minute and moments later was shown his marching orders for a second yellow. Admittedly, it was a harsh second yellow — I’d argue it wasn’t even a foul — but Barcelona was reduced to 10 men with 25 minutes to play.

First, when presented with another seemingly can’t-miss chance to steal the lead late, Memphis headed the ball parallel to the goal instead of toward it. Shortly thereafter he was played in on a breakaway only to smash his shot just wide of the far post.

Then it really got wacky.

In the dying moments of the match, Cádiz was attacking inside the Barça 18-yard box. Somehow, an extra ball had landed on the pitch without the referee noticing. Busquets decided the best defense would be to kick the extraneous ball at the Cádiz man with the ball. This forced the referee to blow the whistle right before a cross was sent into the box for what could have been the game-winning goal.

Busquets kicked a loose ball to a Cadiz player who moments later crossed and scored pic.twitter.com/DbVP7pJ3n4

Clever or cynical? Maybe a little of both.

Busquets was shown a yellow for his time-wasting action while his coach, Ronald Koeman, was sent off for saying something naughty.

Ronald Koeman was sent off pic.twitter.com/fBWUFpJFVG

Cádiz couldn’t do anything with its free kick from the corner on the final play of the match, and it felt very much like Barcelona held on for the draw instead of being held to the single point. Goalkeeper Barça Marc-André ter Stegen was named Man of the Match after coming up with a few vital saves.

While Barcelona has yet to lose in league play, it’s drawn two straight to teams in the bottom half of the table. Combined with the 3-0 defeat to Bayern Munich in the Champions League, one has to wonder how much longer Koeman will last in Catalonia.

Next up for the Blaugrana: Levante at home on Sunday, at Benfica in the Champions League on Wednesday and a visit to the defending LaLiga champion on Oct. 2. El Clásico is just around the corner: Real Madrid visits the Camp Nou on Oct. 24. It could get a lot worse before it gets any better in Barcelona.

Oh, and for the Americans reading: Sergiño Dest started at left back, shot an early chance about 25 feet too high and was subbed out in the 80th minute.