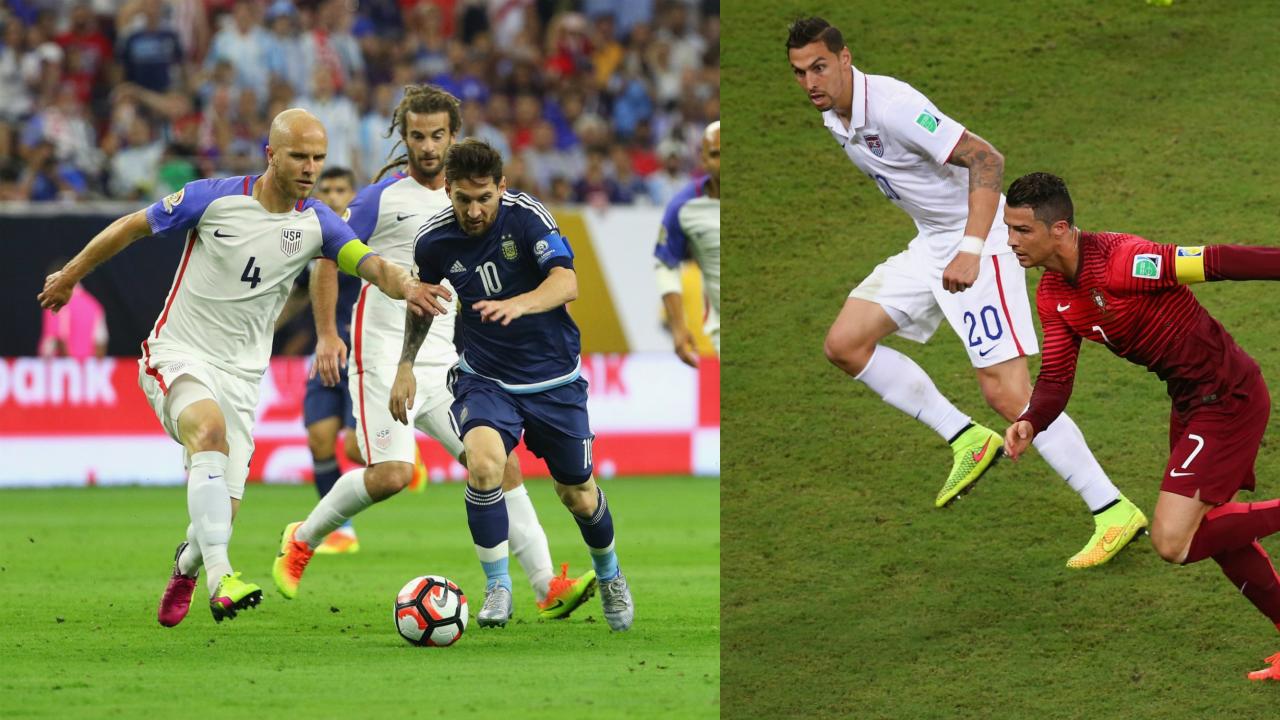 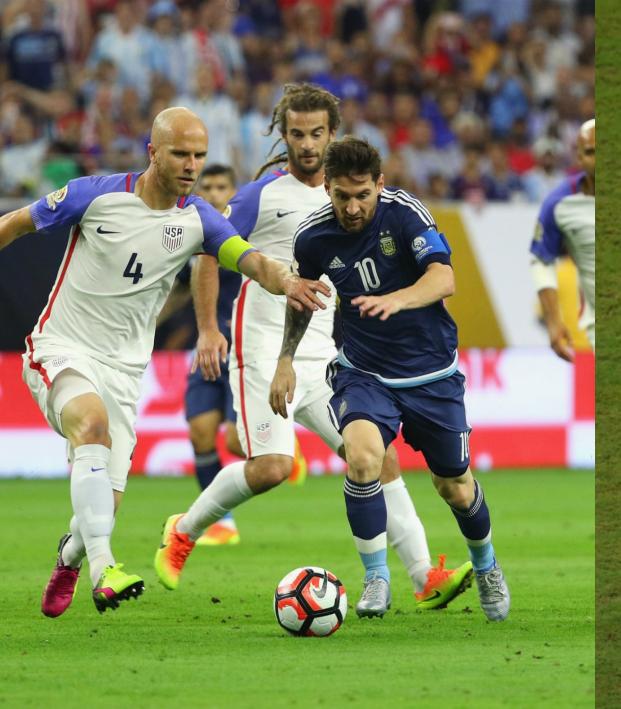 Ronaldo vs. Messi: Who Has Fared Better Against The USMNT?

Travis Yoesting April 30, 2020
The true test of a player’s worth is how he fares against the U.S. men’s national team.

We all know the true worth of a footballer is measured by how they perform against the best of the best, when everything is on the line. In men’s soccer, there is no stronger barometer of greatness than how one fares against the U.S. men’s national team. So to resolve the Ronaldo vs Messi debate once and for all, here’s a look at how the two GOATs have performed against Michael Bradley and Co.

The U.S. has faced off against Lionel Messi or Cristiano Ronaldo a total of five times, three of which came in major international competitions. The Americans have faced Messi twice in Copa Américas and Ronaldo once in a World Cup.

Let’s look at the numbers.

Ronaldo vs Messi Against USMNT — The Matches

The first time the U.S. faced either Messi or Ronaldo came in the 2007 Copa América, a group-stage match against Argentina.

The USMNT had just come off a win at the 2007 Gold Cup, but Bob Bradley, in his infinite wisdom, sent an inexperienced team down to Venezuela for the Copa América, prompting CONMEBOL to not invite the Americans back to the tournament for almost a decade.

Despite taking the lead on a ninth-minute penalty kick from Eddie Johnson, the U.S. was smashed 4-1 by La Albiceleste in the opening group-stage match, with Diego Maradona watching from the stands. Hernan Crespo scored the first of two goals two minutes after Johnson’s strike following a Juan-Roman Riquelme chip.

A fresh-faced, 20-year-old Messi played 79 minutes, his best chance to score hitting the side netting of 37-year-old Kasey Keller’s goal. Messi set up Crespo’s second strike with a well-weighted through ball in the 60th minute and was probably going to hit a sick scissor kick goal before Pablo Aimar swept in with a header to make it 3-1. Messi’s replacement, Carlos Tevez, scored the final goal of the match.

Argentina went on to lose to 3-0 to Brazil in the final, Messi’s first taste of silver in his international career. To highlight the different approaches of the two Concacaf teams in the competition, Mexico reached the semifinals (losing 3-0 to Argentina) with most of its best players on the roster.

A year after the Copa América defeat, the Americans welcomed Messi and Co. to Giants Stadium in East Rutherford, New Jersey.

At the time, Argentina was the No. 1-ranked team in the world, with Messi, Sergio Aguero, Javier Mascherano, Pablo Zabaleta, Maxi Rodriguez, Gabriel Heinze and Fernando Gago all in the starting lineup that day.

Before the match, Kasey Keller was honored for his 100th cap, but the night belonged to Tim Howard, who came up big every time he was called upon, helping the U.S. secure a 0-0 draw.

Messi started the match but couldn’t produce enough magic to beat Howard. Being a friendly, it wasn’t the most important of results, and surely not one Messi stays up late at night thinking about. Probably.

Three years later the U.S. would host Argentina for a friendly in New Jersey again, this time at the New Meadowlands Stadium.

At this point in his career, Messi was the best in the world, in the middle of a run of three straight Ballon d’Ors and a Champions League and LaLiga winning season with Barcelona. Against the USMNT that night, he was an absolute menace throughout, a constant presence in and around Tim Howard’s box. At one point late in the first half, Messi made Michael Bradley look like a schoolboy, zipping past him before ripping a shot Howard did well to save.

Moments later, Messi created Argentina’s opener, driving to the end line before playing a ball in to Angel Di Maria. While Di Maria’s effort was saved by Howard, the ball bounced out to Esteban Cambiasso, who plowed it into the roof of the net.

Messi probably would’ve had a couple goals if not for the heroics of Howard. The New Jersey native allowed the Americans to salvage a draw that night as Juan Aguedelo was in the right place at the right time to turn in a rebound from a Carlos Bocanegra header.

After three meetings with Messi, the USMNT finally got a chance to see Cristiano Ronaldo up close and in person at the 2014 World Cup in Manaus.

The match was heavily hyped, especially after the Americans’ dramatic win over nemesis Ghana in the opening group-stage match.

Jurgen Klinsmann, in part because of Jozy Altidore’s hamstrings made of uncooked pasta and in part to limit Ronaldo, fielded a defensive lineup, one that was immediately undone by a horrid mistake from Geoff Cameron, allowing Nani to pounce to make it 1-0 inside five minutes.

The U.S. never backed down from the European heavyweights and Jermaine Jones equalized in the 64th minute with a 25-yard blast that produced the greatest sound in the history of football and one of the USMNT’s greatest-ever World Cup goals. Clint Dempsey then gave the Americans the lead in the 81st minute by scoring with his crotch, because that’s how Texans do it.

Cristiano Ronaldo was mostly limited on the day. He dazzled with some tricks and skills, but mostly near midfield, which the U.S. defense was happy to allow. He took a blatant dive early in the second half the ref fully ignored, neither awarding a PK nor showing the reigning Ballon d’Or winner a yellow.

Ronaldo’s best chance to score came on a breakaway in the 62nd minute, but facing down Tim Howard, the Real Madrid star shockingly shanked his shot into the nosebleeds.

But in the dying moments of the match, with the U.S. seconds away from a remarkable victory, Ronaldo came through in the clutch. The Portugal No. 7 found space on the right wing, and when DaMarcus Beasley failed to close down his crossing lane, Ronaldo whipped in one of the best crosses you’ll ever see for Silvestre Varela to head home a late equalizer.

The point proved just enough to power the USMNT into the Round of 16 ahead of Portugal on goal difference after Ronaldo’s side had capitulated in a 4-0 defeat to Germany, the eventual champion that only beat the U.S. 1-0.

The U.S. hasn’t faced Ronaldo again since, the star winger not chosen for a 2017 friendly in which the teams drew 1-1. Ronaldo was also not on the 2002 World Cup squad that lost to the U.S. 3-2, instead picked to represent his country at that year’s U-17 Euros, also failing to escape the group stage.

The most lopsided result on this list was also the most recent.

The 2016 Copa América Centenario was held on U.S. soil, a rare chance for the Americans to make their mark on the international stage. The U.S. rebounded from an early defeat to Colombia to beat Costa Rica, Paraguay and Ecuador en route to the semifinals. There, Jurgen Klinsmann’s side met a Messi-led Argentina side hungry for international success after two straight years of falling in major finals and having outscored its opposition 14-2 in four prior matches.

While the Americans had looked decent in reaching the semis, the gulf in class between the two sides was immediately apparent in Houston.

In the third minute, a clever chip from Messi found the head of Ezequiel Lavezzi to make it 1-0. Half an hour later, Messi essentially ended the game with one of those perfect free kicks where you begin to wonder if he’s more machine than human.

Messi created two Gonzalo Higuain goals in the second half as Argentina cruised into the final.

It looked like, after such a devastating show of force, La Albiceleste would finally claim international glory. Instead, Argentina would fall to Chile on penalty kicks yet again five days later in New Jersey.

Ronaldo vs Messi Against USMNT — The Numbers

Messi and Ronaldo have both averaged one goal or assist per game against the U.S. However, Messi scored against the Americans and created more opportunities. Not included in his three assists are two more hockey assists, giving him the edge over Ronaldo in assists per match.

Ronaldo vs Messi Against USMNT — Conclusion

Ronaldo’s appearance against the U.S. came on the biggest stage, in the World Cup, and he couldn’t find a way to propel his side to victory. Had Portugal beaten the USMNT, Ronaldo’s team likely would’ve advanced to the knockout rounds. In contrast, in his biggest game against the U.S. — the 2016 Copa América semifinal — Messi was magnificent, leading his side to an easy victory.

While you could argue Messi had a greater supporting cast, Portugal won the 2016 European championship with many of the same players as the ones who tied the U.S. in the Amazon two years earlier, beating France in the final mostly without Ronaldo.

While it’s close — and the data set is limited — one must conclude Messi has performed better against the U.S. than Ronaldo and therefore is a better player than Ronaldo. There can be no argument against this.