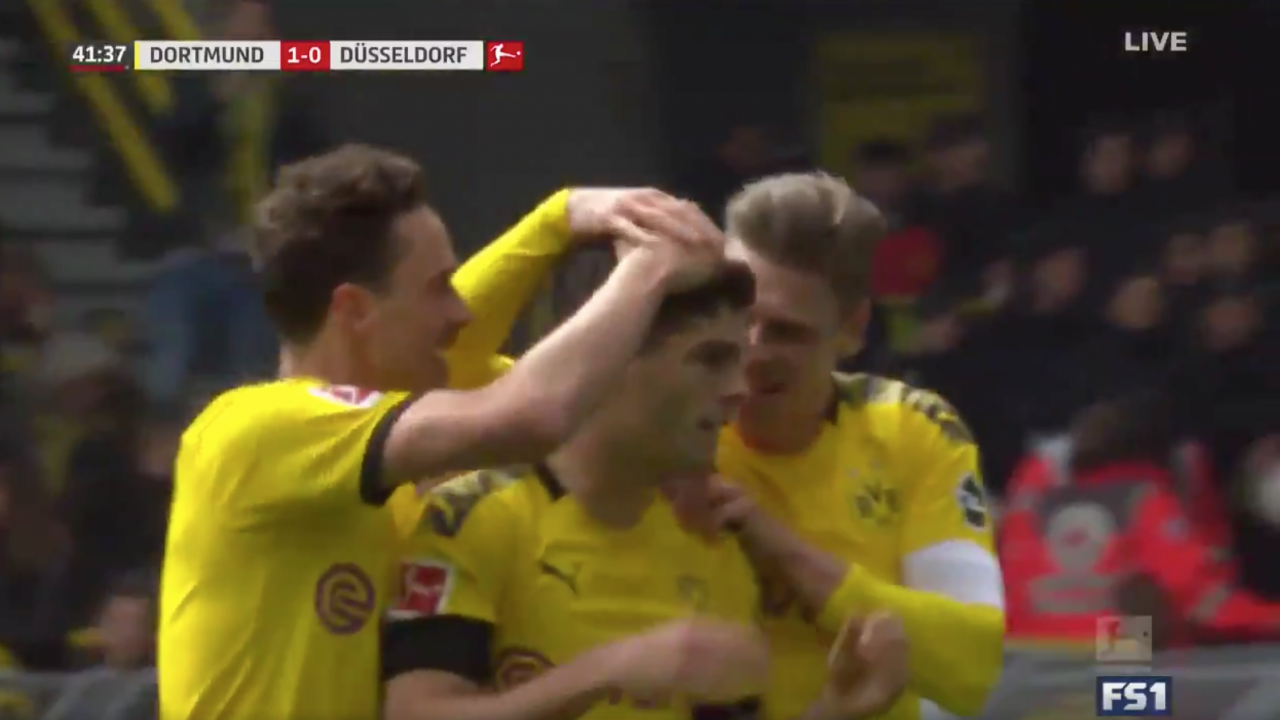 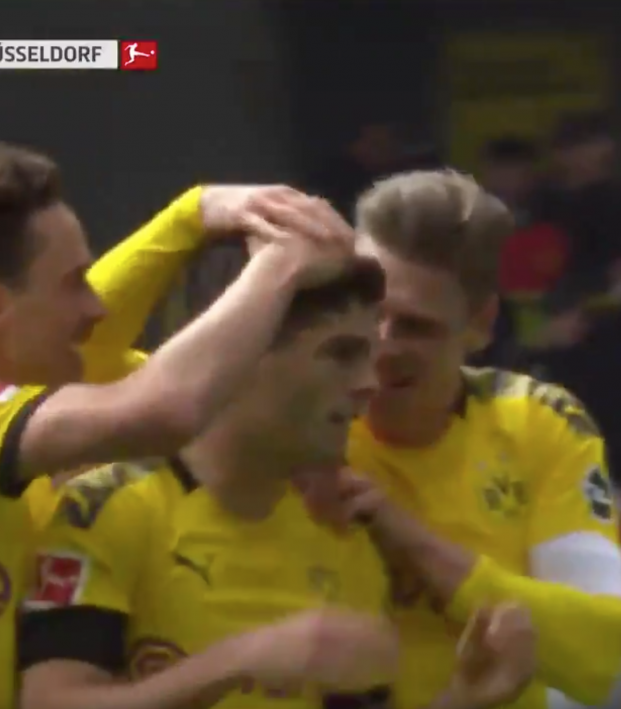 Christian Pulisic played his final home match in front of Borussia Dortmund’s magnificent Yellow Wall on Saturday. The American 20-year-old will play for Chelsea come next fall, but he gave his home fans for the last four years a little parting gift against Fortuna Düsseldorf.

Pulisic opened the scoring with a diving head in the first half as Dortmund held on to a crucial 3-2 victory. Combined with RB Leipzig’s 0-0 draw with Bayern Munich, BVB is now two points back of the defending champions with one match to play.

Pulisic, who came to Dortmund at the age of 16 in 2015, was honored before the match in his final home appearance at the Westfalenstadion.

He repaid the thanks with a goal in the 41st minute.

Pulisic’s goal was his fourth of the Bundesliga campaign that has seen him miss 11 matches due to injury. It was the product of patient buildup from Dortmund, Pulisic ending up in the right place at the right time to turn home a header from Thomas Delaney.

The Pulisic goal vs Dusseldorf was a prelude to a wild start to the second half.

But the match didn’t stay tied for long.

Moments later, Delaney gathered his own rebound to strike Dortmund back into the lead in the 53rd minute.

Five minutes after that, Dodi Lukebakio, who was taken down in the box by Hitz, hit his ensuing penalty kick wide and Borussia Dortmund fans everywhere exhaled.

Düsseldorf threatened throughout the remainder of the 90 minutes to equalize again, even after Adam Bodzek was shown straight red for a bad challenge on Jadon Sancho.

The chippiness of the match was exemplified by Pulisic picking up a yellow card for a foul on fellow American Alfredo Morales.

Pulisic was taken off in the 90th minute to a standing ovation from the Westfalenstadion, a recognition of what Pulisic has brought to the club.

Mario Götze finally put the game away with a nice goal in the 92nd minute.

Dawid Kownacki did give Düsseldorf a bit of window dressing with a goal in the 95th minute, but Dortmund held on to three vital points.

Bayern, meanwhile, drew 0-0 after Leon Goretzka had a goal ruled out by Robert Lewandowski being called marginally offside by VAR.

Bayern now sits on 75 points, two ahead of Dortmund with one match to play. Bayern ends the year against sixth-place Eintracht Frankfurt while Dortmund travels to face fourth-place Borussia Monchengladbach. Both Frankfurt and ‘Gladbach are still in the hunt for a top-four finish, meaning neither of the four clubs will have an easy match on the final day.

Dortmund needs to win and hope Bayern loses to still have a shot at dethroning the team that’s won the last six Bundesliga titles. But thanks to Pulisic, there’s still a chance.