Connor Fleming November 21, 2016
A new study from Deloitte, one of the world’s leading accounting firms, highlights the upside of promotion and relegation in growing the American game.

A new study from Deloitte, one of the “Big Four” accounting firms in the world by revenue, has offered up some pretty obvious conclusions with regards to implementing a system of promotion and relegation in the American soccer pyramid, but it’s also provided one of the more realistic takes on the possible benefits and risks involved.

The report was commissioned by Silva International Investments Limited, the company of Riccardo Silva — owner of Miami FC in the USA’s second division, the North American Soccer League. Obviously, getting a debate started as to why the change would be a good thing for US soccer is in Silva’s better interests, but he’s not alone in that regard: the study says 88 percent of fans believe introducing promotion and relegation would be beneficial for club soccer in the USA. 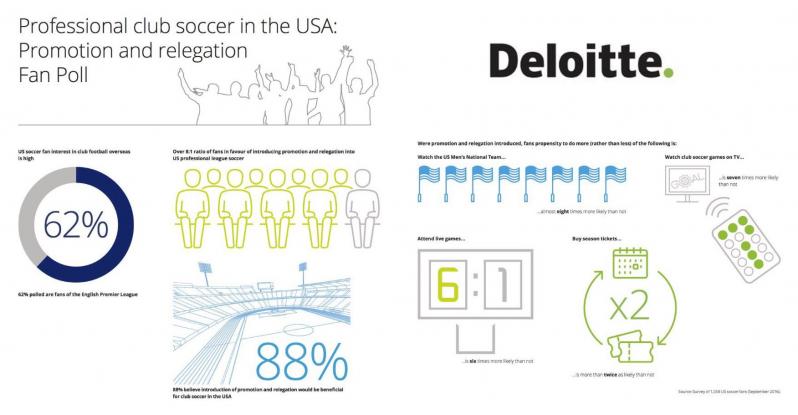 If leagues like MLS, NASL and the USL want to produce the best possible product, it’s obvious that the most immediate impact of implementing such a change would be an increase in narratives and meaningful matches throughout the season.

The previously-meaningless games between teams at the bottom of the table become the prime clashes of the weekend, and this can have a positive effect on match attendance and broadcast numbers.

Additionally, MLS now finds itself directly competing with other leagues around the world, which may appeal to an American audience. This element of survival would be introduced to stay on par with other leagues, and this will force owners to continually improve their organizations. This ambition would be mirrored in the lower divisions, where new owners can strive for promotion to the top.

All of these positives theoretically lead to increased competition, better facilities, better coaches and new revenue streams for all participants. These positives have long been touted as the main benefits of promotion and relegation in the United States, but Deloitte also recognizes the current risks involved.

While the company certainly believes that promotion and relegation are an eventual necessity, Deloitte also maintains that the change shouldn’t be made immediately.

First, there’s the basic question of how many teams will comprise the existing leagues. MLS, the NASL and the USL all need to finalize their existing structures before anything can be done with regard to promotion and relegation.

Second, and this is directly tied to the first point, the NASL (America’s current second tier) isn’t ready in terms of development and stability to be a viable option of providing clubs that are ready to join the first tier. An immediate remedy for this problem would be a playoff system between the relegated MLS clubs and the promoted NASL clubs, ensuring that the stronger sides play in the higher division.

Finally, implementing the system now would be devastating to long-term league investors. For example, Minnesota United FC’s owners have invested heavily in the franchise being in MLS for the 2017 season, including the building of a new stadium.

It’s almost a certainty that they’ll struggle in their expansion season, almost all expansion clubs do, but the prospect of being relegated back to the NASL would’ve made their investment implausible.

The history of US soccer shows that MLS owners should be extremely wary of the leagues operating beneath the highest level, and this problem won't go away overnight.

Deloitte concludes their study by saying that MLS has come a long way while providing stability and support for the game, but that the league has not yet met the demands of fans or delivered the best possible product.

The current business model faces significant challenges over the long term, and a closed league system makes less and less sense moving forward. To capitalize on the massive potential of soccer in America, a system of promotion and relegation should be realized eventually.