Premier League Clubs Planning For Mid-May Return Of Up To 10,000 Fans

Reuters February 22, 2021
English stadiums could allow up to 10,000 fans from mid-May under lockdown easing.

LONDON - Crowds of up to 10,000 could be allowed back into English soccer stadiums from mid-May under a plan outlined by the British government on Monday to ease COVID-19 lockdown restrictions in England.

Under the third stage of the four-stage "roadmap”, stadiums will — if all conditions are met — from May 17 be allowed to hold up to 50% of their capacity, or 4,000 people, whichever is lower. A special provision will be made for large outdoor, seated venues, so that they can open their doors to up to 10,000 people or 25% of the capacity, whichever is lower.

"The turnstiles of our sports stadia will once again rotate," Prime Minister Boris Johnson said.

Stadiums in some parts of England briefly opened their doors to a limited number of fans in December, but the government launched another national lockdown after a new wave of COVID-19 infections. With infections falling following the introduction of the latest lockdown and the start of a vaccination campaign, there is now the possibility of stadiums hosting fans before the end of the soccer season.

It will come too late for the FA Cup final, scheduled for May 15 at Wembley, but the last weekend of the Premier League season is May 23 and the Football League promotion playoff finals take place from May 29-31. The Football Association welcomed the news in a statement.

"The FA is absolutely delighted fans will be allowed back soon," it said. "The game is simply not the same without them and we look forward to the return of full stadia as soon as it is safe and possible." 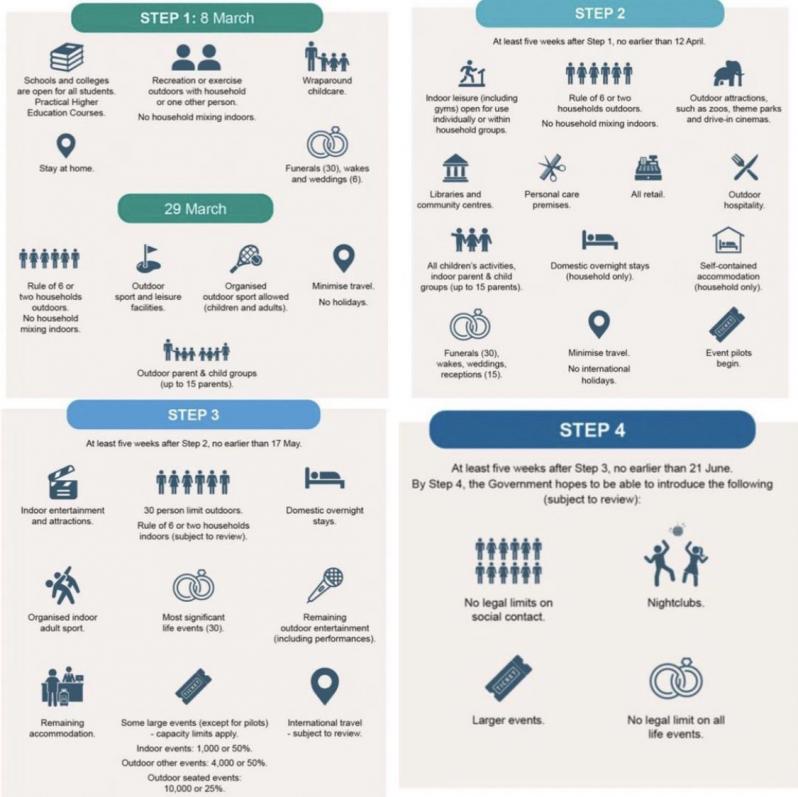 The stages of easing the U.K lockdown.

The first stage of the easing of lockdown restrictions will allow the return of school sports from March 8. The second phase, from March 29, will permit the re-opening of outdoor facilities such as tennis courts and golf courses.

The plan depends on four conditions being met. The vaccine program must go to plan; data must prove there is a reduction in the number of people dying with the virus or needing hospital treatment; there must be no surge in infection rates; and new coronavirus variants must not heighten the risks of allowing the re-opening of society.