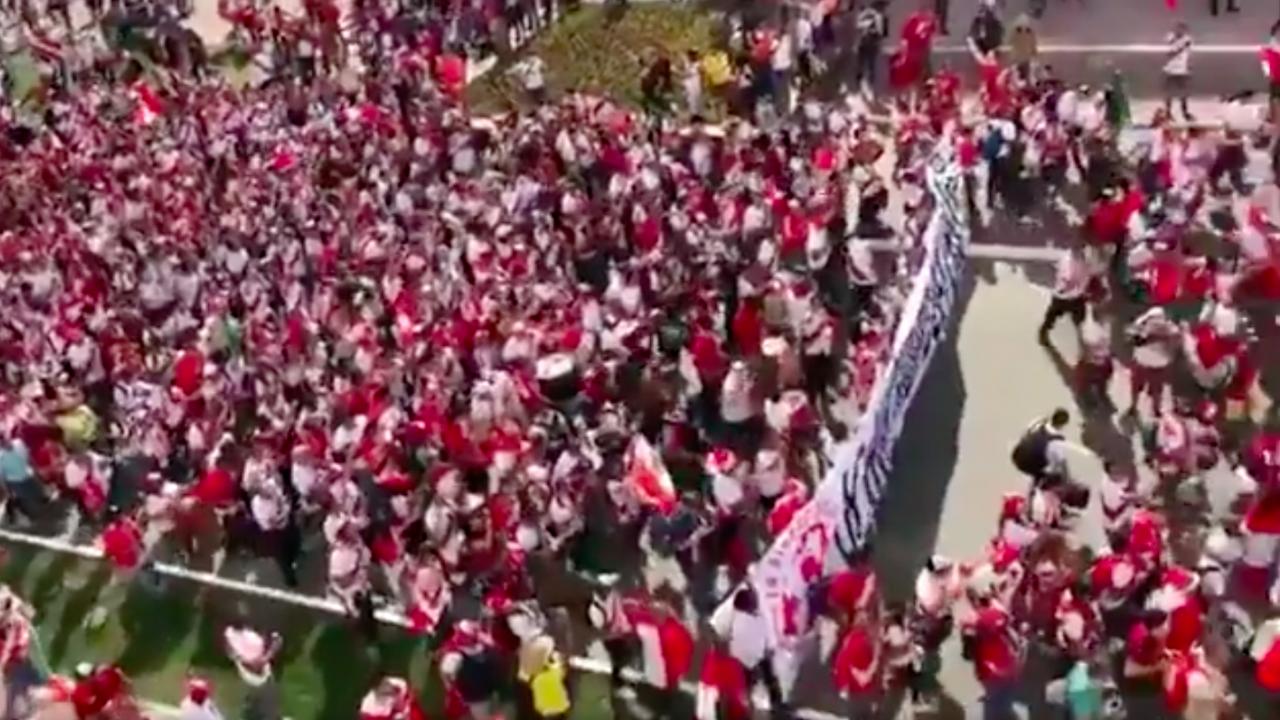 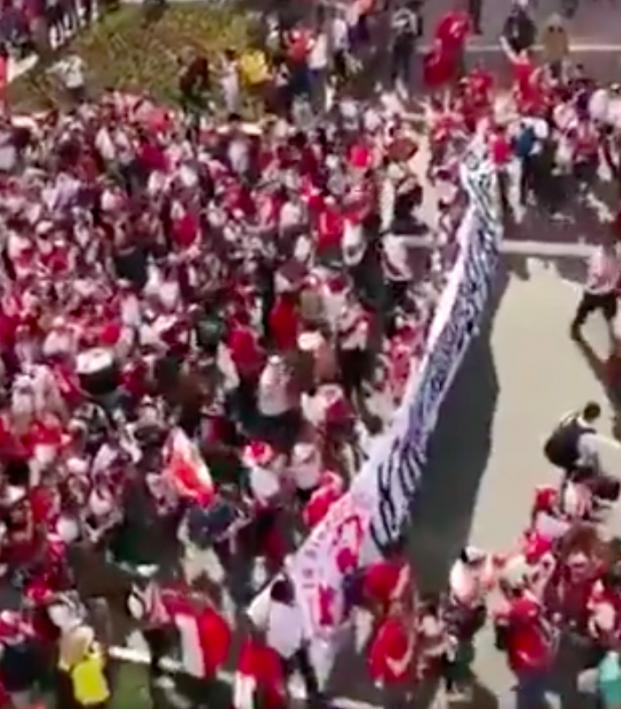 Huw Thomas June 18, 2018
Drama, comedy and epic, glorious failure all add up to show why Peru has secured the title of People’s Champion.

Peru’s the best team at the World Cup.

Technically, only one team can win the tournament. Only one team will have its name engraved on the Jules Rimet trophy (2.0) come mid-July. But there’s more than one way to win the competition.

As well as the battle towards the final, there is an on-going fight for the hearts and minds of fans around the world. This is almost an entirely separate story, one which has nearly nothing to do with actually playing football. This is the People’s Champion. The team everyone loves. The team which reminds everyone of the entire emotional spectrum of footballing existence.

And that’s why Peru’s the best team at the World Cup.

Electing a People’s Champion after one game seems precocious; “There’s plenty of football left to play,” you say. “You haven’t even seen all the teams!”

Sure. But Peru has played and, already, its the team that should be commanding all of your attention. Who else are you going to care about? Belgium? Not even Belgian people care about Belgium. They’re just an off-brand France. They’re dull and their eventual quarterfinal exit will affect your life in no way.

So let’s take a look at all the available evidence we have: the 90 minutes played against Denmark in Peru’s opening game. About five minutes into the match, it was clear that we were witnessing something special.

Peru started the game with all the ferocity of a swarm of bees whose nest had just been trampled under a particularly Danish foot. La Blanquirroja also played with all the tactical nous and restraint of a homeless swarm. Attack after attack thrust forward, only to be met by a stern Scandinavian wall.

We’ve seen teams like this at the World Cup before. Chile, under Marcelo Bielsa and his disciples, became the South American meme team of choice by unleashing a relentless attacking effort and gassing themselves out by the 70th minute of every game.

It’s a style which absolutely baffled the Danes. Denmark hadn’t been expecting this onslaught and, in truth, neither had anybody at home.

After all, this is a team whose highest profile player is Jefferson Farfán, currently of Lokomotiv Moscow. Peru has players in MLS, Brazil, Mexico and Peru, but for European football fans, and especially those who don’t follow the Russian league, the only real point of reference is Watford’s fourth choice striker, André Carrillo.

That’s partly what’s so exciting about the sudden emergence of Peru. The nation burst onto the scene playing a vibrant and thrilling brand of football with players the audience had mostly never heard of. It’s a proper throwback to the days when every single game from every global league wasn’t available via the internet; when a World Cup actually meant learning about new players and new footballing cultures for the first time.

Furthermore, it was clear which set of fans were having the best time. By all accounts, Peruvians have travelled in huge numbers to Russia, thrilled to be part of their first World Cup in 36 years. In the stadium, they were drowning out the Danish fans with regularity. The World Cup term “party atmosphere” is the greatest cliché going, but there was definitely a spark of excitement in the air.

So much so that there were stories of fans doing remarkable things to make sure they were at the game. FIFA has reported sales of over 43,000 tickets in Peru, making it the eighth-best supported side at the tournament, though there are estimates that as many as 80,000 fans have travelled with the side.

One man, in a perhaps apocryphal tale, was supposedly so determined to get a ticket that he chose to gain an additional 50 pounds of weight in order to qualify for one of FIFA’s tickets for disabled individuals. This Homer Simpson-minded individual might well be pure fantasy but that’s besides the point: Peru’s trip to the World Cup is already birthing legends and stories which will transcend the simple playing of football.

We haven’t even mentioned their captain and most important player yet.

Paolo Guerrero is Peru’s record goal scorer and their leader, but he very nearly didn’t make it to Russia. Last year, he was slapped with a year-long ban after traces of cocaine were found in his system after a doping test.

Guerrero’s defense is that he drank coca tea, a traditional drink which is a big part of Peruvian culture and contains traces of the same plant as cocaine. He appealed the ban and had it halved, only for WADA, the World Anti-Doping Agency, to have the ban restored, placing Guerrero’s World Cup in doubt.

He appealed and appealed but was continually struck down. In May, he went to the highest court possible, the Court for the Arbitration of Sport in Switzerland. This was his last chance. His final chance at appealing and being part of the squad.

His defense included calling up a trio of centuries-dead Peruvian mummies as witnesses. The deceased’s remains also had traces of coca tea in their system, indicating that the drink was a important part of the local culture and that it could linger in the system for centuries.

As well as this, captains from France, Australia and Denmark magnanimously signed a letter calling for the ban to be overturned. It was successful and Guerrero was allowed to play at a World Cup at the ripe old age of 34. Feel-good stories such as this only add to the myth-building narrative which is emerging around Peru.

As he lumbered on to the field in the closing stages of the game against Denmark, it seemed inevitable that he was going to score. Peru’s angry-bee approach had resulted in shot after shot after shot, but they couldn’t put the ball in the net.

So, with the side’s finishing seemingly ropier than the ropiest length of rope around, their veteran goal scorer entering the fray should have been the ideal end to the fairy tail story. Immediately Guerrero was involved, demanding the attention of the defense and the keeper.

A cheeky back heel went just wide. A header struck the keeper right in the belly. Peru’s tails were up and they could sense a goal coming.

But it never came.

Thus, we had the last essential element for a People’s Champion at a World Cup: failure.

No one loves a favorite. It’s hard to love a winner that’s responsibly shouldered the expectations of a nation and dealt with it in a professional manner. The biggest teams can never be the populist choice.

No. We want desperate, frenzied passion. We want a team that’s flying by the seat of their pants, cruising through the game on a cloud of energy and delight and desire and hunger. Winning just makes things complicated. Winning is secondary, especially for a team of Peru’s meagre resources.

Let’s look at them in comparison with Iceland.

What Iceland has done is incredible. For a nation of only 300,000 people to even be at a World Cup, yet alone to hold Argentina to a draw, defies belief. They’re organized. They’re structured. They’re doing a good job and everyone in the team never gives less than 75%.

But they’re so dull. They’re turgid. They’re Stoke with better PR. Unless you’re actually from Iceland, you have no business cheering their success. Not when Peru’s right there being brilliant.

Glorious defeat is so much better than boring success. Peru might not win a single point in this tournament, but its performance against Denmark has set the bar insanely high when it comes to winning the hearts of the people at home.

Peru’s failure is its victory. It’s the opposite of a pyrrhic victory. In glorious, triumphant defeat, Peru’s become the People’s Champion.

This is the Peru World Cup.