Travis Yoesting September 19, 2018
Paul Pogba opened the scoring for Manchester United in the Champions League, but his coach didn’t seem too enthused.

Manchester United coach Jose Mourinho hasn’t always seen eye to eye with his most expensive player, Paul Pogba — of this, there is no secret.

Mourinho has benched the Frenchman in the past and transfer rumors swirled around the powerhouse midfielder before the close of the summer window.

Pogba is still arguably the best player Manchester United has, so Mourinho is a bit stuck with him for now. But that doesn’t mean he has to enjoy it.

In United’s Champions League opener against Young Boys on Wednesday at Stade de Suisse Wankdorf in Switzerland, Pogba scored the opener in brilliant fashion, dribbling around a defender and rocketing a left-footed shot into the top left corner.

The Pogba goal vs Young Boys was a wonderful way to kick off the Champions League campaign for a club that has struggled in the Premier League so far.

But Mourinho did not give AF. 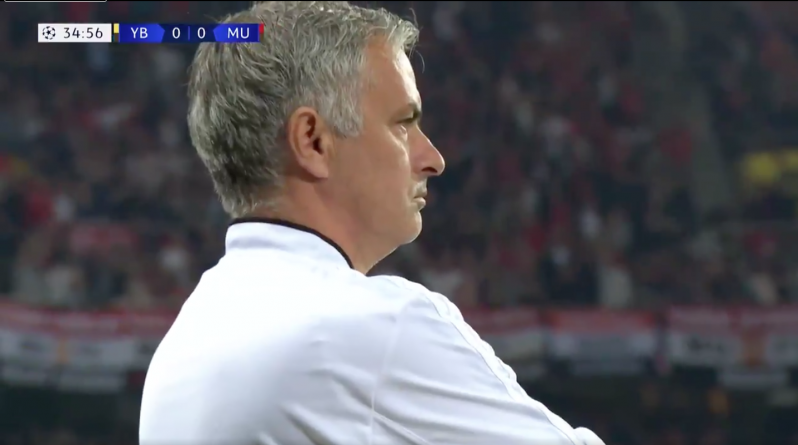 Is Jose trying to tell us something about his feelings for Pogba? Or did he just have a super-delayed reaction like Diego Maradona?

Pogba scored a first-half brace after converting a penalty kick just before halftime after Young Boys defender Kevin Mbabu committed a hand ball in the box.

United led Young Boys 2-0 at the break thanks to Pogba's two goals, a much better start to the day than Manchester City, which trailed Lyon 2-0 at halftime at home.