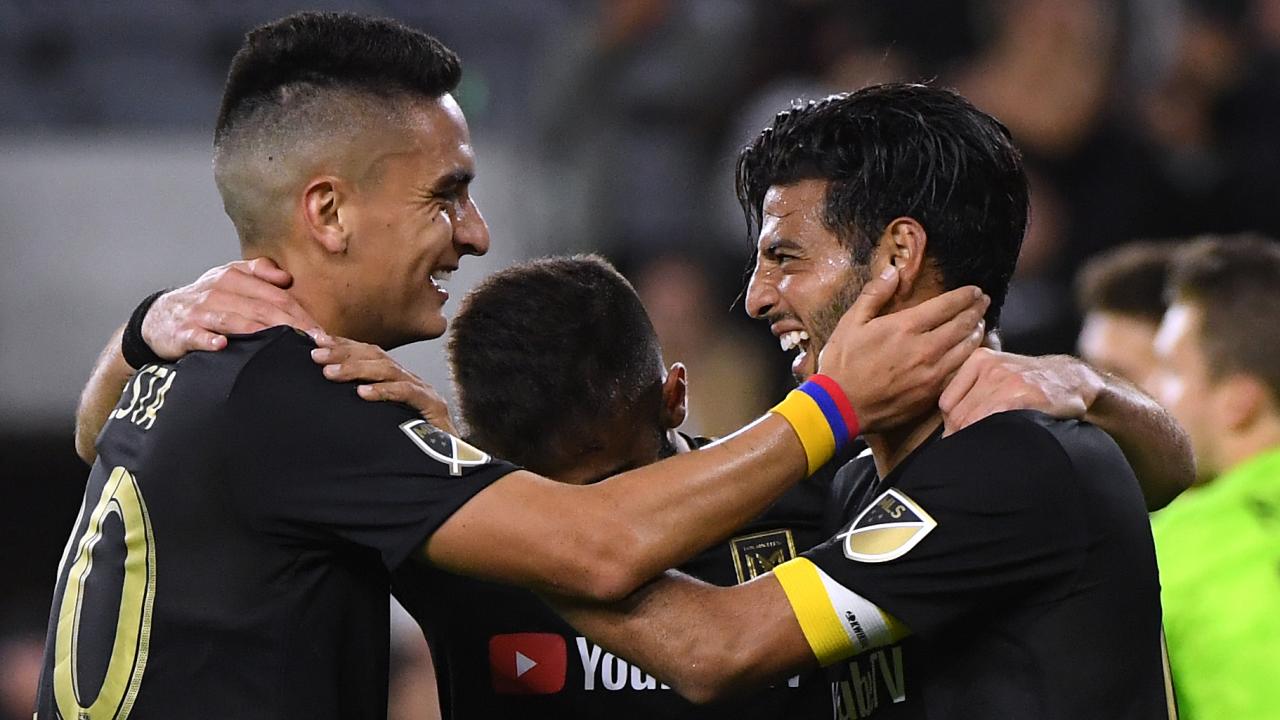 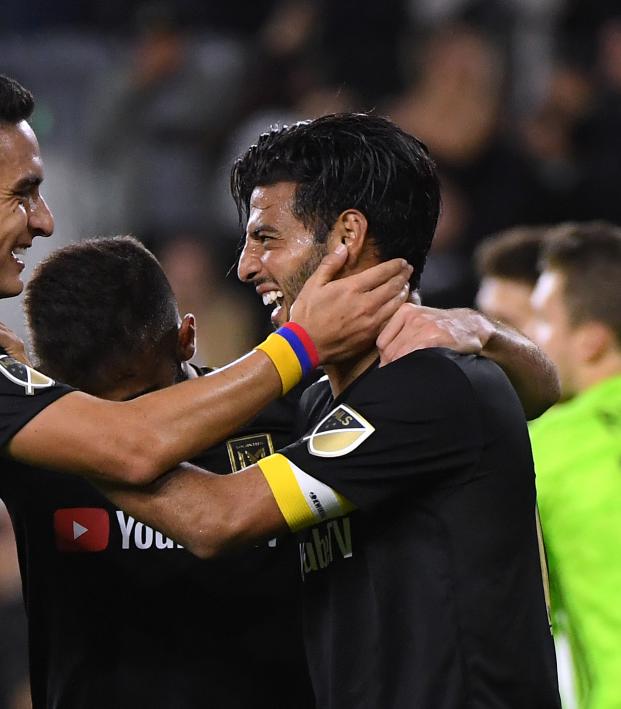 The final day of the MLS regular season — dubbed “Decision Day” — is less than two weeks away (Sunday, Oct. 6). The picture in the Eastern Conference is clear with six of the seven playoff spots already decided, but the Wild West is only settled with regards to the top seed, Los Angeles FC.

Here’s a look at the 2019 MLS playoff picture as things currently stand. Remember that changes have been made to the playoff format this year: Seven teams form each conference make the playoffs while the top seeds receive byes to the Conference Semifinals. Every round is single-elimination with the higher seed hosting. Rounds will not be re-seeded.

Only one spot left in the East... pic.twitter.com/nU6xHJYcw3

So many spots up for grabs in the West! pic.twitter.com/rk0tnGVAtu

After sticking with a lot of USL players and going heavy in the MLS SuperDraft, FC Cincinnati found the perfect formula to quickly wrap up this year’s Wooden Spoon. With two matches remaining, the Orange and Blue have conceded 74 goals, tying the MLS record for defensive futility. FCC has allowed five or more goals in five matches, and they recently endured a nine-game run without a win.

The only team other than Cincinnati to be averaging less than a point per game is Vancouver, thanks in large part to the league’s second-worst attack (33 goals in 31 games) and only two road victories all year. Many predicted a rough year for the Caps after a complete roster overhaul (including 15 new players), and that turned out to be the case.

To have any shot at the playoffs, the Crew need to win their final two matches and have New England lose all three of its remaining games. That’s not going to happen. This was Year One of Caleb Porter after Gregg Berhalter took the USMNT job, and the Crew also had to deal with the departure of goalkeeper Zack Steffen to Fortuna Düsseldorf. At least we know the Crew will return to Columbus in 2020.

Like Columbus, Orlando has to win its final two matches and hope for a catastrophic finish to New England’s season. But what’s going to happen is Orlando missing the playoffs for a fifth straight season (every year since the club joined MLS back in 2015). Nani has scored 12 goals and provided nine assists in 28 appearances, but the Lions haven’t won a match since Aug. 14. This current six-game winless streak has sealed their fate.

Same story as Columbus and Orlando: on the outside and looking at New England. The Impact have lost 17 games this season — only Cincinnati has lost more — and a goal difference of minus 16 is third-worst in MLS. Attendance has never been lower at Saputo Stadium and the signing of former Barcelona wonderkid Bojan Krkić (one goal in 428 minutes) has failed to ignite things.

You have to go all the way back to 2010 to find the last time Kansas City didn’t make the playoffs, which was Peter Vermes’ first season as head coach. SKC won’t make it this year because of a defense that’s shipped 57 goals (1.54 per game), the second-worst defensive record in the West.

With three games remaining, Houston needs to win out and hope that either San Jose or FC Dallas collapses. Unfortunately for the Dynamo, two of their final three games are on the road, where they’ve collected only six points all year. The Dynamo’s rebuild is beginning now with a new head coach set to be named by October.

The Fire’s situation is only marginally better than that of Columbus, Orlando and Montreal, but the club could certainly win its final two matches (at home against Toronto and away to Orlando) while holding out hope that Portland, NYCFC and Atlanta all do the business against New England.

But a scoreless draw against Cincinnati on Saturday likely doomed the Fire, and the club’s final season in Bridgeview — like so many over the past 10 years — ends in disappointment. Still, a return to Soldier Field in 2020 beckons.

Only LAFC has scored more goals than Colorado in the Western Conference, but no team in the West has conceded more than the Rapids. Although Tim Howard pocketed $2.475 million in his final year as a professional, he also allowed nearly two goals per game over the course of his 23 starts.

The Timbers are the first team out in the Wild West by the slimmest of margins. Portland has the same number of points as seventh-place San Jose, the same number of wins (13) and the same goal difference (+1), so the Earthquakes are above the Timbers by virtue of the third tie-breaker, goals scored.

The Timbers play New England at Providence Park on Wednesday, travel to Kansas City next Sunday and then finish back in Portland with what could turn out to be a play-in game against San Jose.

For the Quakes, it’s a home match on Wednesday against Philadelphia followed by another home game on Sunday against Seattle. Matías Almeyda’s side will be looking to climb the table with six points from those games and avoid an all-important showdown with Portland at Providence Park on Decision Day.

Dallas, as opposed to both San Jose and Portland, has only two matches remaining, but the Hoops will be confident that they can win both: an away match against Colorado next Sunday followed by a home match against Kansas City on Oct. 6.

However, the club has gone winless in its last three games, so the pressure is on Luchi Gonzalez to deliver.

Bruce Arena’s arrival as manager coincided with an 11-game unbeaten streak that made New England the toast of MLS. Since then, the Revs have managed only one win in their last eight games. Regardless, the final spot in the East belongs to them if they can scrounge up some points against Portland, NYCFC and Atlanta. It’s certainly not an easy run-in.

Salt Lake currently sits fifth in the Western Conference, which would have them traveling to the four-seed in the first round of the playoffs. In fourth, with one more point, is the LA Galaxy. And guess what, the two clubs meet on Wednesday at Rio Tinto Stadium.

RSL could massively alter its playoff route by defeating the Galaxy on Wednesday, followed by another winnable home match against Houston next Sunday and then a trip to lowly Vancouver on Decision Day. If Real takes all nine points, second place in the West belongs to them.

After the disappointment of missing the playoffs in 2018, the Galaxy have almost certainly punched their ticket with Zlatan’s 27 goals and five assists in 26 games leading the charge. But can the Galaxy finish the season strong enough to guarantee a first round game at Dignity Health Sports Park, where they’ve won 11 matches this year?

The away match against RSL on Wednesday is massive, but the Galaxy finishes with a home game against Vancouver next Sunday followed by a trip to Houston on Decision Day.

With two games remaining, a playoff spot has been secured by TFC. But can Toronto secure a first round match at BMO Field? They’ll need to defeat Chicago away and then take care of Columbus on Decision Day to have any chance of making that happen.

Just like Toronto, a playoff spot in the East has been secured with two matches remaining. What’s more, New York actually controls its own destiny with regards to securing a home match at Red Bull Arena. Next Sunday, the fifth-place Red Bulls host fourth-place D.C. United, and a NYRB win would see them leapfrog Wayne Rooney’s side. Decision Day holds an away fixture, but it’s a soft one against Montreal.

D.C. United has won its last three games by an aggregate scoreline of 6-0, giving the Black and Red hope of hosting a playoff match at Audi Field. But standing in the way is next Sunday’s trip to the New York Red Bulls. However, United ends the season with the easiest fixture imaginable on Decision Day — they host Cincinnati.

Minnesota closes with tricky matches against Kansas City, LAFC and Seattle, but two of those three games are at Allianz Field, where the Loons have only lost a single game all year. They should finish second, third or fourth in the West, but this is also uncharted water for the club. Can they hold their nerve better than they did in the opening 16 minutes of the U.S. Open Cup final?

Seattle travels to San Jose next Sunday before finishing at CenturyLink against Minnesota. Currently second in the West, we don’t see the Sounders tumbling down to fifth (or lower) by the time the playoffs start.

The 3-1 victory over Atlanta on Aug. 31 had Union supporters dreaming of an Eastern Conference title, but Philly’s come back down to Earth following a draw with LAFC and a 2-0 defeat to NYRB on Saturday.

Still, the Union hasn’t hosted a playoff game since 2011, so what a season for Jim Curtin’s men. They finish with road matches against San Jose and Columbus before returning home against NYCFC on Decision Day.

Atlanta could still catch NYCFC at the top of the Eastern Conference — especially since the two clubs meet at Yankee Stadium on Wednesday — but we don’t see that happening, especially since Josef Martínez has been ruled out of that match. However, that bit of bad news is ultimately a huge relief for Atlanta supporters: It was initially feared that Martínez could be done for the season after going down against San Jose on Saturday.

According to the latest reports, Martínez is still in pain but does not have any ligament damage and nothing is broken. He’s been listed as day-to-day, so who knows if the man with 26 goals in 28 games will be risked against Montreal (Sept. 29) or New England (Oct. 6).

A four-point lead with three matches remaining should be enough for NYCFC to clinch the top spot in the East and a bye to the Conference Semifinals. Still, it’s a daunting end to the schedule with Wednesday’s home match against Atlanta followed by trips to New England and Philadelphia.

Top spot in the West and a bye to the Conference Semifinals has already been secured, and the Supporters’ Shield could be clinched on Wednesday with a victory over the Houston Dynamo at Banc of California Stadium.

No team has collected more points at home than LAFC, and that’s where the 2019 MLS Cup Final will take place if the Black and Gold can navigate the Western Conference playoffs.