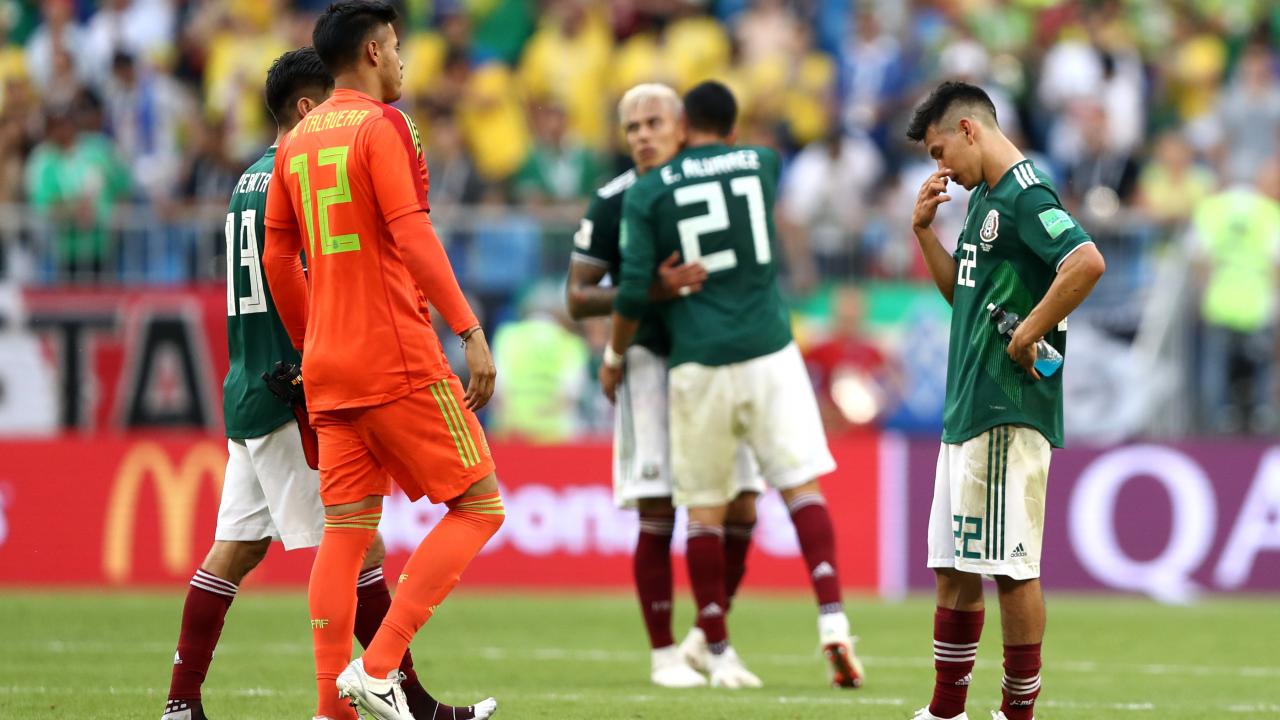 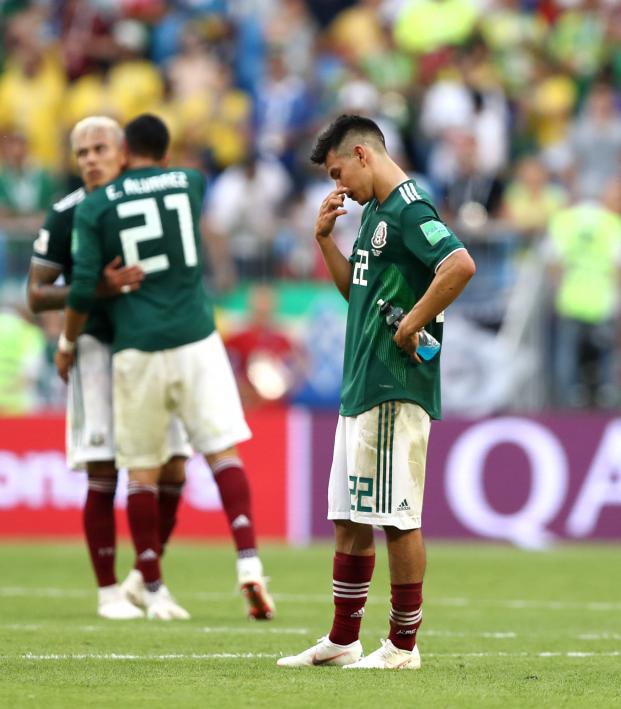 There's Clearly Something Mental In Mexico's Round Of 16 Curse

Tabaré Azcona July 2, 2018
That's seven straight eliminations in the Round of 16 for El Tri.

Yet another Mexico Round of 16 elimination has us wondering why El Tri can't ever make it to the quarterfinals. It seems like Mexico is actually facing a curse when it comes to getting past the Round of 16 at the World Cup. But why is it that El Tri is simply unable to surpass the first knockout stage and make its way to the much desired Quinto Partido?

After all, Concacaf rivals USA and Costa Rica have already managed to do so. There are, of course, a number of reasons for this.

Sometimes, like today, the rival team is just better in every possible way. However, there have also been times when Mexico is playing better, even against stronger teams, and still lose at the end of the day.

Since 1994, Mexico has managed to qualify for the knockout stage no matter what. This in itself is a remarkable achievement since many national teams struggle even to qualify for the tournament, let alone survive the group stage. And this, of course, means something. Mexico has enough talent and quality to be, at least, among the best 16 national teams on the planet.

But somehow, the motivation, focus and sometimes even the luck seems to vanish once the group phase is over. El Tri always excites millions of fans in Mexico and then lets them down in the same way.

Take, for example, the 1994 World Cup. Mexico advanced to the Round of 16 after finishing first in Group E. They would then face Hristo Stoichov’s Bulgaria.

Mexico was considered favorite to advance to the quarterfinals. However, the game finished tied 1-1 and then, after two missed penalties during the penalty shootout, Mexico was eliminated.

Even Mexico’s Jorge Rodríguez, who had never missed a penalty in his entire career, failed to score.

In 1998, Mexico had to face Germany in the Round of 16, and of course Die Mannschaft were favorites. And yet, somehow, Luis "Matador" Hernández put Mexico ahead in the second half.

The minutes slipped by and it seemed like the unbelievable could in deed materialize — Mexico could beat Germany.

But then, two German goals buried all hopes and the game finished 2-1.

In 2002 Mexico once again had a golden opportunity to make the quarterfinals as they faced utmost rivals USMNT in Japan.

During the group stage, Mexico had beaten Ecuador and Croatia, and getting a point out of the clash versus Italy was another good sign. So it seemed like El Tri meant serious business.

Nevertheless, the match turned out to be perhaps one of Mexico’s most painful and unexpected defeats as Landon Donovan set the final score at 2-0.

In 2006, Mexico faced Argentina in the Round of 16. An early goal by Rafa Márquez put Mexico ahead, but shortly after, a Jared Borgetti own goal leveled the score sheet.

During extra time, a superb strike by Maxi Rodríguez –which would be named the best goal of the tournament– found the back of the net and the Argentineans emerged victorious.

In 2010, once again, Mexico stacked up against Argentina. This time it was Lionel Messi, "Pipita" Higuaín and Carlos Tévez that crushed Mexican expectations. Chicharito scored the only goal for El Tri and the match finished 3-1.

The match against the Netherlands in 2014 is surely Mexico’s most bitter moment in the Round of 16. Mexico took the lead after a brilliant Giovani dos Santos banger.

Mexico was closer than ever as the game was coming to an end, but in the 88th minute Wesley Snjider equalized for the Netherlands. Utter heartbreak would swiftly follow as the referee called a penalty after a controversial tackle on Arjen Robben.

This World Cup, we witnessed El Tri deliver one of its most outstanding performances as it beat world champions Germany in the opening match. In the second game, Mexico got its second victory over South Korea.

The Concacaf giants had everything in their favor to secure first place in their group in the third and final match against Sweden. A tie would have sufficed for Mexico to win the group and avoid the clash against five-time world champions Brazil in the Round of 16.

However, Mexico crumbled to a devastating 3-0 defeat and miraculously qualified for the knockout stage thanks to a surprise South Korea victory over Germany.

And yet, even after the blow, there was confidence, or at least the illusion that Mexico could beat Brazil. After all, some of Mexico’s most important victories came precisely against the Canarinha.

Mexico played really well during the first 25 minutes. They were pressing and quickly getting the ball back in the midfield.

Dangerous chances were scarce and Brazil gradually pushed back, getting some clear goal opportunities by the end of the first half.

In the second half, Mexico boss Juan Carlos Osorio made some tactical adjustments which proved unsuccessful.

After a failed Mexican attack, in which Gallardo opted for a shot instead of an easy pass to Hirving "Chucky" Lozano — who had space to score — the team was caught off balance and Neymar scored.

After this, Mexico never really seemed like they could get back into the game. The speed was slow, the touches imprecise. More than anything, their spirits were broken.

The minutes went by, a frustrated Miguel Layún stomped on the ever histrionic Neymar and was spared a red card, a clear sign of Mexico’s desperation.

Then, in the 88th minute, Roberto Firmino set the final score at 2-0. Game over.

So why is it that Mexico can simply not make it to the quarterfinals?

Sometimes, like today, the other team is just better.

Other times, there seems to be a mental barrier of sorts that keeps Mexico from making it past the nefarious mark on the sand. It is as if Mexico go into the Round of 16 knowing they won’t survive it. It is as if the ghost of elimination is always haunting them.

And then of course there is the wasted opportunities — like not losing to Sweden and avoiding Brazil — and the missed passes, the wrong decisions and the better players.

We shall have to wait four years and see whether Mexico can get rid of this curse or if they will continue to get more of the same. In order to progress further in the tournament, Mexico has to not only truly believe they can do it, but to profit from even the slightest chances they find.

Another thing Mexico lacked this tournament was a true, strong leader that would get the team morale up in the toughest moments.

What Mexico often lacks in the Round of 16 is mental strength and focus, the ability to bounce back and, whenever the case, the wisdom to manage the game in their favor.

In short, what El Tri needs, more than anything, is the determination that gets you to win big games.

They have enough talented players to achieve this.

For now, it is farewell and heartbreak, but we shall be back.