Brian P. Dunleavy November 22, 2015
Nir Bitton is a promising young player in the midfield for Celtic and the Israel national team, and he is drawing interest from English Premier League clubs.

At 24, Nir Bitton already stars for Glasgow giants Celtic in Scotland and for the Israeli national team. But his best is most certainly ahead of him. Despite recently signing a five-year contract extension to remain with Celtic through 2020, Bitton is reportedly drawing interest from a number of English Premier League clubs, including Sunderland. They will have to pay big for his services: Celtic have reportedly priced him at £10 million.

Nir Bitton was born on October 30, 1991 in Ashdod, on the Mediterranean coast. Ashdod is a major port.

Bitton started his playing career with his local club, FC Ashdod, which was formed in 1999 after the merger of two local clubs. Bitton played 123 matches for FC Ashdod, through 2013. The club were relegated to Israel’s second division following the 2014-15 season.

Bitton grew up idolizing Brazilian star Ronaldo and, despite being a defensive midfielder, he scored 14 goals in less than five seasons with his hometown club, drawing the attention of Israel’s national team. He made 21 appearances for Israel’s U-21 national side between 2010 and 2013, and though he scored no goals during those appearances, he was described as a man playing among boys.

Bitton made his first appearance for Israel’s senior national team in 2010 and has been capped 16 times so far.

Bitton served in the Israeli Defense Forces for five years. IDF service is mandatory for most Israeli citizens.

Bitton almost signed with Manchester City in 2012, but work permit issues prevented the deal from going through. He was eventually signed signed to Celtic by former Hoops midfielder and manager Neil Lennon in 2013.

The highly touted midfielder would join his teammate on Israel’s national team, Arab-Israeli Beram Kayal. By all accounts the two players got along at Celtic, despite essentially competing for the same position. However, Kayal, who left Celtic for Brighton & Hove Albion in January 2015 has fallen out of the Israeli national team picture, reportedly due to his decision to post a photo of the Palestinian flag on his Twitter feed. 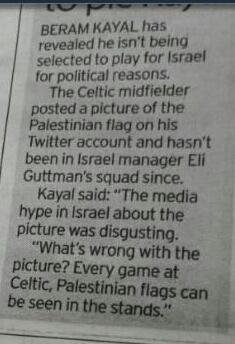 A summary of the flag incident for Beram Kayal. Photo: @PLMoran67 | Twitter

Bitton, too, has been no stranger to controversy as it relates to the Israeli-Palestinian conflict.

In the summer of 2014, during the Gaza War, Bitton posted a Hebrew prayer on Instagram and addressed it to the IDF.

The move angered some Celtic supporters. Many Celtic supporters are Irish, and some Irish have identified with the Palestinian cause due to the Emerald Isle’s own historic struggles against oppression.

Letting His Play Do the Talking

On the field, though, Bitton has quickly become Celtic’s best player, winning over at least some of those fans he angered last summer.

Bitton is now a stalwart in the Hoops midfield, and he has even scored several goals in the 2015-16 season, including a big one during Celtic’s Champions’ League qualification campaign.

Bitton has been compared to FC Barcelona star Sergio Busquets and Benfica and Chelsea great Nemanja Matić. He has been described as Celtic’s “barometer” and is definitely a key to his team’s success, hence the new contract through 2020.

Whenever he takes the pitch, Bitton proves the sky’s the limit for him, and it will be interesting to see where his talents take him next. 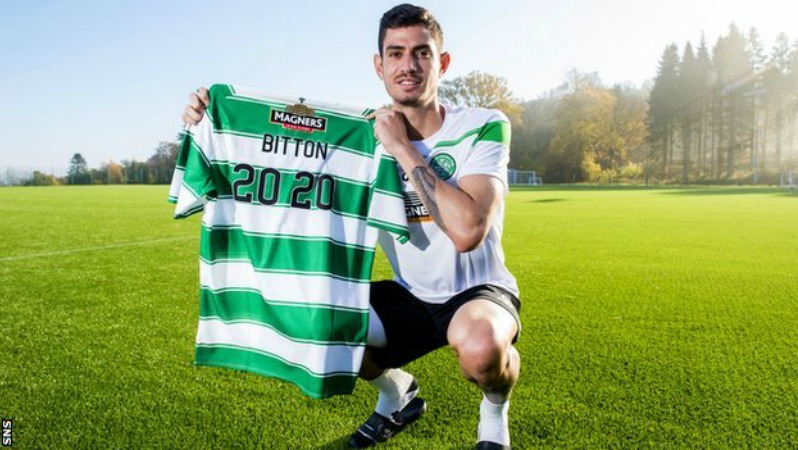 Bitton is rejoicing in extending his stay at Celtic. Photo: @Football_news37 | Twitter