Loss And Rejection Helped Transform Lewandowski Into A World-Class Player

Connor Fleming February 4, 2016
Robert Lewandowski was told that he'd never make it at the highest level. His commitment to the game silenced all the doubters.

When Robert Lewandowski was 17, he lost his 49-year-old father, Krzysztof, to a heart attack. Shortly after, Lewandowski was told by his youth team, Legia Warsaw, that he would never reach his previous levels of fitness and form following an injury.

They subsequently released him, the culmination of a terrible year for the young Polish forward. Lewandowski had put football before everything, dedicating himself to the game and he now had nothing to show for it. Forced to grow up quickly in a difficult time, Lewandowski refused to accept Warsaw’s conclusion.

Speaking with the Mail on Sunday, Lewandowski detailed the internal process that gave him the necessary mental strength to move from the Polish third division to German giants Bayern Munich.

“I thought, 'I can't just lie down and accept it.' I decided to fight back. I said to myself, ‘I’ll show what sort of player I am and what they have to lose.’ I thought I’ll have to keep fighting to show what I can do and show that they had made the wrong decisions.”

Lewandowski’s goals, 15 in 27 appearances for Znicz Pruszków, helped secure his clubs promotion to the Polish second division. The following season, his 21 goals in 32 appearances made him the top scorer.

Lewandowski’s agent then offered him to La Liga’s Sporting Gijón, a move which Sporting rejected. Another rejection spelled even more motivation for Lewandowski.

The natural progression was to the Polish top flight, which he achieved by transferring to Lech Poznan. His two seasons at Poznan saw Lewandowski finish second and first in the goal-scoring charts. Lewandowski’s fighting spirit had seen him rise from youth system reject to the top scorer in all of Poland.

Borussia Dortmund came calling for a sum of €4.5 million. Unable to speak German and seemingly limited in his center forward play, Lewandowski’s transition from goal poacher to complete center-forward was greatly aided by his new manager, Jurgen Klopp. 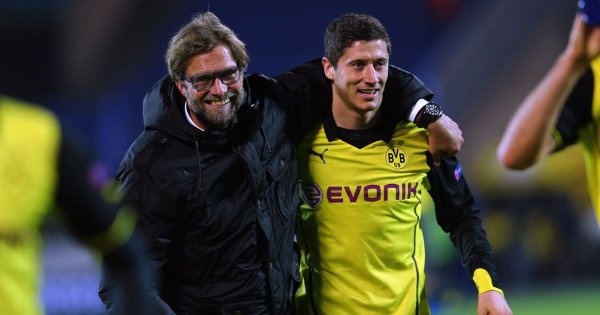 Klopp played Lewandowski out of position during the beginning of his spell at Dortmund, the striker featuring more regularly in a playmaking role as opposed to the out-and-out striker position he preferred.

“I was annoyed having to play as a No. 10 instead of playing up front as the No. 9," said Lewandowski. "I played the whole season as No 10. The following season I thought about why I was in that position, then I realized my game had improved. I learned a lot and, when I played up top again, I realized playing as a No 10 had made me a better player.”

Lewandowski always had a natural sense of positioning in the attacking third, but the move into a more withdrawn role, one that required him to play facing goal rather than with his back towards it, helped develop his awareness of space and the necessary timing for making runs from a deeper position.

Lewandowski became much more comfortable with playing with the ball at his feet under pressure. His new role also led to increased vision, intelligence and a deeper understanding of the game around him. Intertwined with his ability to play as a target forward and his insatiable eye for goal, Lewandowski's new attributes made him a complete forward.

A clinical finisher who can take and create chances in equal measure, the Polish captain elevates the game of everyone around him.

"The biggest satisfaction you can get is when you take a player from Poland, from a small club and watch him play like he does today," said Klopp. “The difference between that player we signed and the player he is today is unbelievable.”