Huw Thomas March 20, 2018
SPAL vs. Juventus ended without any goals, but the game had major ramifications at the top and bottom of the table.

Reading about a scoreless draw is pretty boring, right?

No goals, no costly mistakes, no tactical masterstrokes which decide the game. We might as well not bother. But here we are, with an article about a nil-nil match which happened on Saturday night when most people were somewhere having much, much more fun.

Juventus versus SPAL is exactly the kind of match which you expect to end with all three points going to the reigning champions, part of their relentless march towards yet another Scudetto. Hell, before the game, you could have reasonably pencilled in a score of 2-0 to Juventus (Mandzukic 14’, Sturaro 83’) and no one would notice.

These victories over the smaller teams are Juve’s bread and butter. Such results rarely decide titles but it’s the Old Lady’s ability to soundly beat the minnows which keeps them on top, year in year out. That’s why it’s a pretty big deal when something unexpected happens. Suddenly, the dreariest of dreary results – the scoreless draw – becomes important. It becomes the focus of everyone’s attention.

So, as the minutes ticked away and SPAL kept the score level, people started to pay attention. By the closing stages of the game, the audience was rapt, wondering how exactly Juventus were going to wrap this result up.

A last-minute winner, as it was against Lazio in recent weeks?

A controversial penalty awarded by VAR?

An awful mistake from one of SPAL’s otherwise heroic defenders?

To borrow a Tom Waits line, everyone wanted to know: how's it going to end? We should probably start, then, with how it began.

SPAL had everything to lose. Balanced precariously on the cusp of the relegation places, always looking up at salvation, they’re fighting for every single point. A goal or a mis-kick or an offside decision could be the difference between playing in Serie A and Serie B next year.

But, surely, no one could have expected them to put up a show of strength against Juventus. The champions are hitting their stride right now.

They dispatched Spurs in the Champions League, putting on a demonstration of clinical professionalism. They’ve edged ahead of Napoli in the title race, putting together a run of 12 wins.

They’ve been drawn against Real Madrid as they pursue the European Cup, showing that their sights are set a lot higher than SPAL’s quest for survival. Right now, Juventus are kicking up into their Terminator, T-800 gear. They can't be bargained with. They can't be reasoned with. They don’t feel pity, or remorse, or fear. And they absolutely will not stop.

So you’d forgive SPAL if they simply wrote this game off and decided to focus their energies in other, more winnable fixtures.

It wasn’t just the coach who believed. As the players took to the field, the crowd at the Stadio Paolo Mazza made themselves heard. The atmosphere defied the club’s troubling situation, as the fans cheered and sang, just like they have done as SPAL have risen up through the divisions. Perhaps it was their encouragement that helped the relentless pressing from their side, who didn’t let up all game.

It was a sell-out at the Stadio Mazza. Photo: @spalferrara | Twitter

Especially important was dominating the middle of the park. Juventus’s midfield might be struggling with injuries but, in Miralem Pjanic, they have a player who is – in financial terms – worth more than the entire SPAL team. A metronomic maestro, the Bosnian can wrest control of almost any game.

But against SPAL, he wasn’t give a second to think. Pasquale Schiattarella, converted from a middling winger to a ferocious, destructive defensive anchor, unleashed himself on the middle of the park, forcing the play out wide. That normally wouldn’t be a problem for Juve. Douglas Costa and Alex Sandro (playing further forward) should be enough to settle most games. But every one of their attempted crosses failed to result in a goal.

As every moment passed by without a Juventus goal, the belief in the crowd began to grow. Shot after shot fizzled wide or was headed away or fell, gratefully, into the clutching arms of the keeper. Even as Giorgio Chiellini began to play as a nominal striker in the closing stages, he couldn’t find anyway to turn a cross or a pass into a goal. 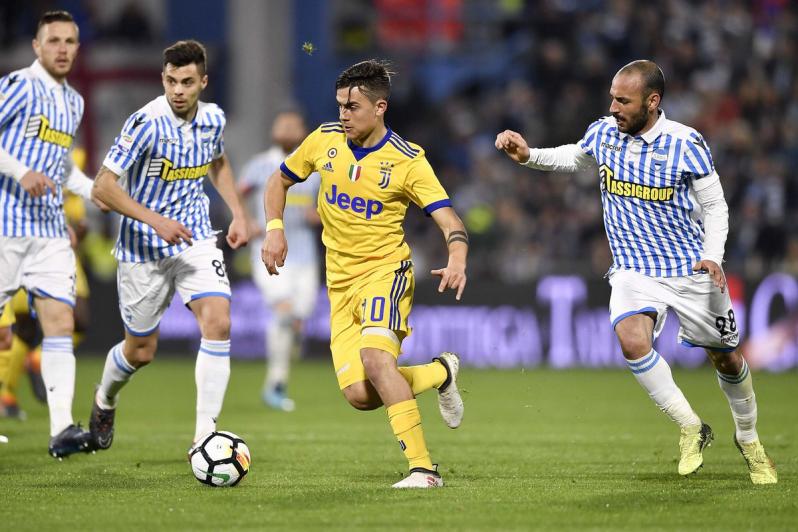 No way through for Dybala and Juve. Photo: @Footballogue | Twitter

Eventually, he limped off holding his hamstring. A fitting metaphor for the entire Juventus performance. Try as they might, they couldn’t find a way through and limped back to Turin with just a solitary point as consolation.

At full time - after five long, long, long minutes of injury time – the SPAL players and fans collapsed in joyous relief. There had never really been a question about them scoring a goal – Juventus haven’t conceded in the league in months – but they managed to shut down Serie A’s most prolific attack. That in itself is a triumph worthy of celebration.

The result was huge. This one point does not guarantee that SPAL will stay in the top flight. But it offers them belief. A building block. A starting position. It’s a demonstration that the players, the manager and the fans all warrant a place at the top table of Italian football for at least, perhaps, one more season.

And so, the most boring result in football became a cause for celebration. The SPAL fans clearly appreciated the efforts of the team, as the eruption of joy in the stadium at full time demonstrated. Their support and their backing was never in doubt. 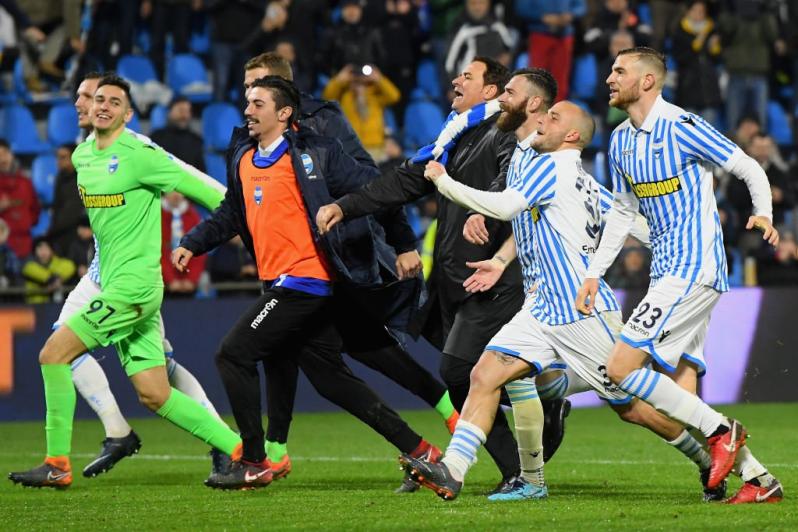 The celebrations stood in stark contrast to crowd activity in other parts of Italy this weekend.

A collection of Lazio ultras, for instance, proved themselves to be among the very stupidest fans in all of world football by launching a pre-game protest against VAR, claiming that the review system is deliberately targeting them in order to favor their rivals for a top four spot. Following on from the Anne Frank debacle earlier in the season, this section of the Lazio fanbase has consistently demonstrated that they don’t deserve the wonderful team Simone Inzaghi has assembled.

But Juventus fans might not know what to think. There was an amused edge to the post-game reaction. Juventus are so used to emerging victorious in these situations, that not doing so is strange and uncanny, rather than distressing.

As a result of this game, both Napoli and Juventus hold their title hopes in their own hands. Soon, Maurizio Sarri’s men will travel to Turin in what is set to be a title showdown. Whoever wins that game will immediately be in pole position for the Scudetto.

But SPAL will not dare to dream so big. They’d take a boring scoreless draw from every game until the end of the season if it meant staying up. For the manager who has guided them to successive promotions, to the father-son duo who own the club, to the fans who had been there throughout the team’s fifty-year absence from the top division, this boring draw could be the most important game of the season.

Nil-nil might be the least interesting result in football. But very occasionally, it can be far more important than you might think.

If SPAL stay up and Napoli clinch the title, the lack of goals in this game could end up being historic. If that turns out to be the case, then this bore draw will be well worth reading about.