Connor Fleming June 24, 2019
With Spain threatening to pull off one of the biggest upsets ever, Ellis decided to stand pat.

With the USWNT and Spain knotted at 1-1 after the hour mark at the Stade Auguste-Delaune in Reims on Monday, La Roja’s Patricia Guijarro broke free on the left-hand side of the U.S. defense and fizzed a shot just wide of Alyssa Naeher’s far post. It was in this moment that a possible upset of historic proportions went from “there’s no way in hell” to “oh shit, this kinda feels like it’s happening.”

By making the midfield battle an even contest (Spain actually edged the USWNT in second half possession) and largely isolating the front three of Megan Rapinoe (who, despite converting two penalties, spent the game inside Marta Corredera’s pocket), Alex Morgan and Tobin Heath, La Roja turned the U.S. juggernaut into a meek, foul-seeking contrivance.

And for 85 minutes, U.S. manager Jill Ellis inexplicably refused to budge, a living personification of the “This Is Fine” meme, pursing her lips on the touchline and looking bemused by the audacity of these Spanish players to actually do battle with the likes of Morgan and Julie Ertz.

What happens when the U.S.’s front three is left to its own devices with the ball continuously ensnared 30 yards away? Can there be a possible change of shape, or is the awesome talent of Rose Lavelle striding through the midfield the only option? According to today’s match, that’s the only option. 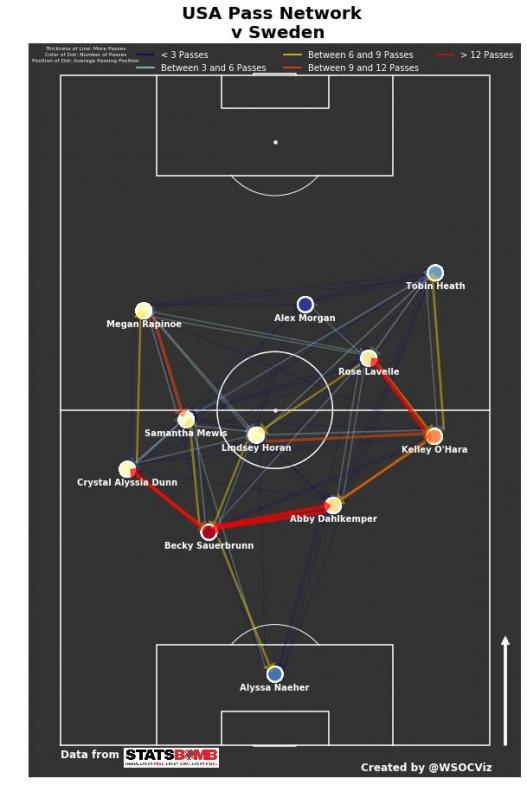 Morgan was isolated against Sweden, and that happened again today.

There are shades of France starting the men’s World Cup with Kylian Mbappe, Antoine Griezmann and Ousmane Dembele all thrown across the front line and with Corentin Tolisso, Paul Pogba and N’Golo Kante behind. This really only got the best out of Kante, who was gifted with a thousand fires to put out.

Didier Deschamps made pragmatic changes, putting the selfless Olivier Giroud up top while Blaise Matuidi came in on the left to allow Pogba the freedom to get forward. It wasn’t all romance and 13-0 victories over Thailand, but it worked.

You get the feeling that if Spain’s manager could’ve turned to one of Mallory Pugh, Carli Lloyd, Christen Press or Jessica McDonald off the bench, the USWNT would be going home. But Spain, as throughout the group stage, really struggled to generate an attack of note outside of Jennifer Hermoso’s early goal. That was, after all, their only shot on target.

And so we're ominously reminded of Hope Solo’s comments before the tournament concerning Ellis: “Jill — she’s not the leader I wish her to be,” Solo said. “She relies heavily on her assistant coaches. She cracks under the pressure quite a bit. But oftentimes it doesn’t matter, because the quality of the players on the U.S. team is superb.”

Today was dangerous because that quality failed to shine through. Rapinoe failed to beat her marker on four or five occasions; Morgan was treated physically and it rattled her; Crystal Dunn, not allowed the freedom to get forward, struggled defensively.

These things happen, but it’s up to the manager to provide some sort of answer or remedy. There was a total absence of a plan B or any sort of tactical shift from the U.S.

The good news — the only news that matters — is that the U.S. is through to the quarters. The bad news is that the host nation, under the guidance of the hugely impressive Corinne Diacre, awaits.

Amandine Henry and Elise Bussaglia will give the U.S. midfield an even greater challenge, and Eugenie Le Sommer and Valerie Gauvin won’t be anywhere near as forgiving as Spain’s attack.