A disastrous week of qualifying for the Republic of Ireland began with a 0-0 draw away to Georgia on Saturday and concluded with a 1-0 defeat to Switzerland in Geneva on Tuesday, effectively handing control of Group D over to the Swiss and Denmark in Euro 2020 qualifying.

Torrential rain before Tuesday’s match had pounded the pitch at Stade de Genève, but the prospective bog figured to suit an Irish side that entered the match with an anemic attack that’d produced only six goals in six games coupled with an unforgiving defense that’d conceded only twice.

A victory for Ireland would see them earn direct qualification to next summer’s championship, and Mick McCarthy’s pledge to go for all three points was verified by a first international start for forward Aaron Connolly. The 19-year-old had only just made his first Premier League start for Brighton back on Oct. 5, but he recorded a famous brace in a 3-0 victory over Tottenham.

There were questions over whether the match would even take place or be pushed to Wednesday given the state of the pitch.

But the officials gave the green light, and as early as the third minute we got to watch Irish keeper Darren Randolph eat shit while attempting to go long with a goal kick. 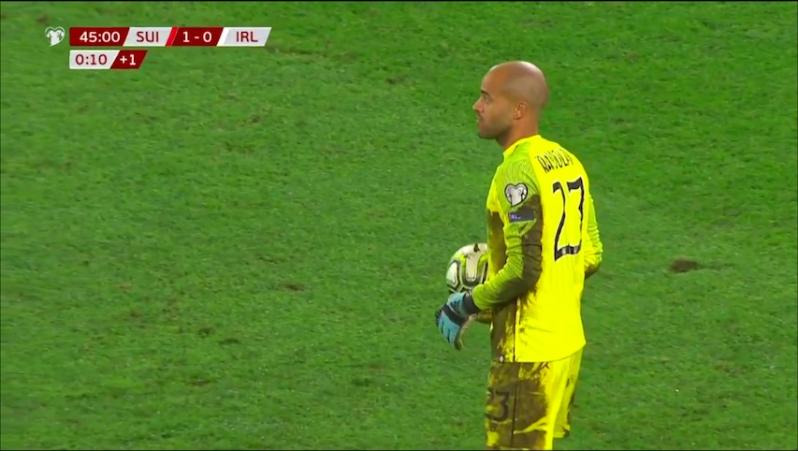 A large contingent of Irish fans generated the majority of noise inside the stadium, but the traditional Switzerland cowbells perfectly complemented the state of the pitch. 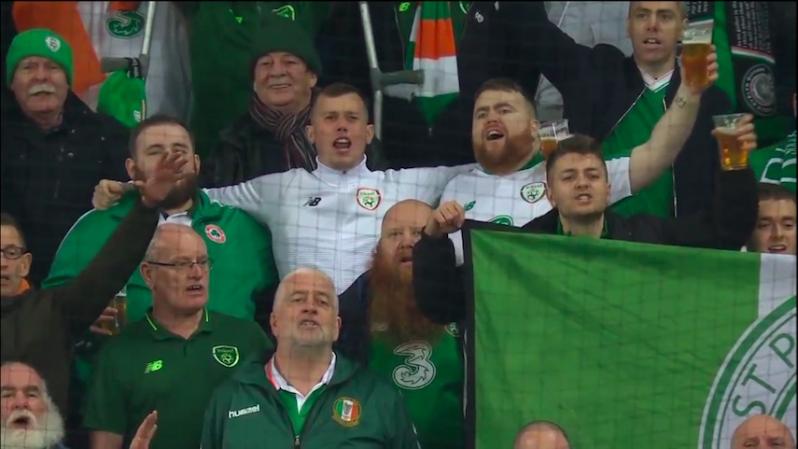 The Swiss dominated the opening period. They played beyond Ireland’s initial press with ease, and the Boys in Green looked uncharacteristically ramshackle in midfield. Ahead of Glenn Whelan, Jeff Hendrick and James McClean struggled to stop the Swiss from playing between the lines, and the home side brought the ball into Ireland’s third without meeting much resistance higher up the pitch.

Tactically, that set the stage for the opener. In the 16th minute, in-form Benfica striker Haris Seferović took one touch before bending a shot into the corner from the top of the area.

It didn’t look good for Ireland. 35-year-old Stephan Lichtsteiner was finding joy bombing down the right flank, Fabian Schär was in buccaneering form and fired one just wide from distance and Ireland captain Séamus Coleman was busy foreshadowing his own evening by looking extremely wasteful whenever he found himself in possession.

This was probably the best piece of tactical advice Ireland could receive before the halftime whistle:

Last two or three minutes of the half, Randolph should try tear up the penalty area to make it super-bobbly for the second-half. #SUIIRL

Although the Irish came out with a stronger sense of attacking intent in the second half, Switzerland should’ve doubled its advantage by the 75th minute. First, Schär hit the post with a header off a corner kick, and then Ricardo Rodríguez had a chance from the spot after Coleman handled one in the area.

But Randolph saved Rodríguez’s effort to keep Ireland’s hopes of salvaging a point alive, although Coleman’s handball reduced them to 10 men for the game’s final 15 minutes.

When the second goal of the match did arrive, it came in the third minute of second-half stoppage time. With every Irish player running on fumes, Switzerland hit them on the counter and Edimilson Fernandes provided the finish.

As things stand, Switzerland can book its place at Euro 2020 with victories in its final two matches: home against Georgia and away to Gibraltar. You’d have to put money on the Swiss achieving that.

Likewise, Denmark should certainly beat Gibraltar and that will set the stage for Ireland’s final qualifier: in Dublin against Denmark on Nov. 18. If things play out accordingly, the Irish will need to win that match to qualify for Euro 2020 — anything less and it's the playoff route.