Travis Yoesting October 15, 2019
Carli Lloyd said the 2019 World Cup was the ‘worst time of my life,’ but she insists it should only be taken in the best way.

Carli Lloyd is creating a little controversy that she wants you to know isn’t a controversy and is just a result of “click bait” and “sad stuff!”

Lloyd, who won her second Women’s World Cup over the summer, was on “Laughter Permitted with Julie Foudy,” an ESPN-produced podcast, released Tuesday. Lloyd, 37, spoke of her unending desire to be the best there ever was, but in doing so has rubbed many people the wrong way.

Day 2 of #WorldCupChampsWeek rolls on with the indefatigable @CarliLloyd, 2 time FIFA World Player of the Year, on our #LaughterPermitted Bonus Potcast. Yes, POTcast. Loved getting the time to pick Carli's brain: https://t.co/8m1QpkfJwv pic.twitter.com/qeqcwLFzxR

In America, we love an athlete who excels in areas like teamwork, leadership and work ethic. Someone who appears to work hard is going to have more fans than someone who is Mesut Özil.

For this reason, among others, Carli Lloyd is a beloved figure among U.S. soccer fans. At the age of 32, she became the best version of herself we’d ever seen, dominating the latter stages of the 2015 Women’s World Cup to earn her title as best women’s footballer.

For the 2019 Women’s World Cup, however, Lloyd was not deemed one of the best 11 players on her team. She started one match this summer despite scoring three goals in seven appearances.

In her recent interview with Julie Foudy, a two-time World Cup winner herself, Lloyd was clear she was happy for her teammates to have won the 2019 Women’s World Cup. But she was also clear she thought she was the best player in France.

“There’s no denying it, I deserved to be on the field that whole World Cup, but I wasn’t,” Lloyd said. “I think I’ve grown as a person, as a player. It sucked; it absolutely sucked.”

Lloyd said the last three years (she specified from 2017 after her ankle injury with the Houston Dash through the 2019 World Cup) “have been the worst three years of my entire career.”

“I’m not going to lie and sugarcoat it; it was absolutely the worst time of my life,” Lloyd said firmly, still with a hint of anger in her voice. “It affected by relationship with my husband, with friends, it really was the rock bottom of my entire career.”

Headlines around the country have focused on Lloyd saying the 2019 World Cup was the “worst time of my life,” as in this ESPN headline. 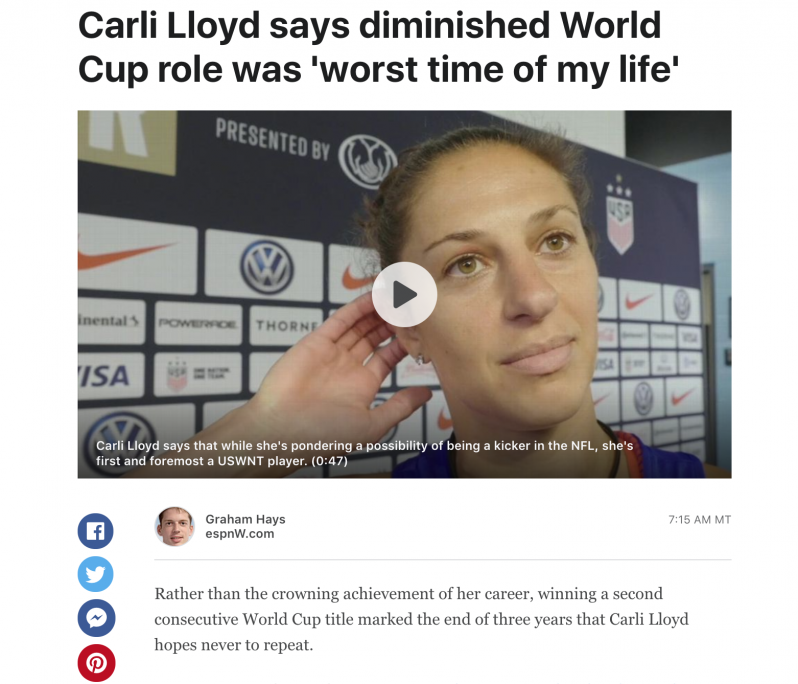 Just like how 90 percent of the time someone cries “fake news” it’s simply facts someone doesn’t want to believe are real, it’s hard to claim “click bait” over direct quotes of what Lloyd said.

However, she does have a point that most people don’t read anything but the headline.

We here at The18 can’t count the number of times we’ve written a headline and tackled the nuance of the subject in the actual story (you gotta click the link) only to see people posting comments without having read anything but the headline. Too often people just get their news from headlines, which is like studying for a test by reading the title of the textbook.

So with that in mind, it is important to show how Lloyd was not just being a selfish star player who thinks she’s better than everyone. For the record, she does think she’s better than everyone, but she was able to hold that belief while still being a good teammate. She even refused to mention the player(s) she thought she should have started ahead of (Alex Morgan?).

When you actually listen to the podcast, almost every time Lloyd said she was upset about not playing more at the World Cup, she qualified it by reiterating how hard she worked to be a good teammate and support the team as best she could.

“I knew I was going to give it my all no matter what, all the way ’til the end, so I could walk off proud knowing that I had no regrets and I was going to do anything possible,” Lloyd said. “Every single chance and opportunity I got, I was going to do everything in my power to help the team.”

Those quotes aren’t quite as catchy as her talking about how she deserved to play more, so nothing of the sort was in, say, the story Bleacher Report wrote about the Carli Lloyd podcast quotes. ESPN, Yahoo Sports and USA Today did include the following quote of Lloyd showing happiness for her team and teammates, the latter two probably just pulling the quote from the ESPN story without having listened to the podcast.

“I was super happy for my teammates and happy for Megan, who put the team on her back, and for several other players,” Lloyd said. “It was great to see, and I’m happy that I could still have been a part of it.”

To be clear, there’s no evidence Lloyd was a bad teammate this summer. When she was on the pitch, she was impeccable, extending her record of scoring in consecutive World Cup matches to six while also becoming the oldest player to score two World Cup goals in a single match against Chile at the age of 36.

But Lloyd speaking out about wanting to play more rubs some people the wrong way. Many people just don’t want an athlete speaking out against playing time or saying winning a World Cup is “rock bottom.” Social media has wondered how a professional athlete can view winning the biggest competition in her sport as a career low or how being paid to go overseas to play a game can be the worst time in her life. It probably doesn’t help that she’s a female athlete and women are always held to higher standards than men.

also for all her faults at least Abby had a mature viewpoint on her role in the 2015 World Cup, this is just further proof that Carli Lloyd never should have been in the same sentence as “captain”

All those views are valid (everyone is entitled to their own opinion), but Lloyd really doesn’t want you to see her as complaining, even though that’s exactly what she’s doing, going as far as to retweet people who stood up for her right to complain.

If you listened to the entire interview, @CarliLloyd was and is still proud of winning the whole thing. And in fact, being a two time champ is her favorite accolade. She is allowed to be confident in her abilities and allowed to share how she felt. Since when is that a problem?

I think the issue most people have is with Lloyd being so outspoken about her ego, saying she’s better than her teammates and deserved to start ahead of them.

“It’s not one of these things where I want to be a selfish player, I just know my ability and the intangibles I bring, like Abby when she played, or Mia, there’s something about them, teams are worried about them,” Lloyd said with no lack of confidence. “There’s a lot of things I bring to the table that are still valuable in my opinion.”

While Lloyd has probably earned the right to compare herself to Abby Wambach and Mia Hamm, it’s jarring when you hear an athlete speak with such brashness (unless it’s Zlatan or Cristiano). It doesn’t really help Lloyd’s case when she says she’ll wait to see what kind of playing time the new USWNT coach will give her before deciding if she’ll play at the Olympics next year.

“I hope a coach comes in that values me, respects me, wants me a part of the Olympic plans,” Lloyd said. “There’s no question that my ability’s there. Physically I’m able to do it. I’d love to be a part of it, but I want to have an open, honest conversation because if I’m not, I can’t go through what I went through for three years.

Fans want their favorite players to have confidence but to not speak with an ego. There’s a fine line there and when someone crosses it, fans get upset, because that’s what fans do.

The truth is always in the nuance. But that requires internet people to read something more than a headline, which is almost impossible these days. There’s a reason The Onion doesn’t write more than a few paragraphs for its stories these days; people only read headlines and tune everything else out.

Lloyd probably lies somewhere in between the two camps of fans, those who support and defend her comments vs. those who say she’s acting out of turn.

In the end, you should really just listen to the whole podcast and decide from yourself if Carli Lloyd is an entitled diva or a tragic hero. Until then, I’ll leave you with one last quote from the two-time World Cup winner, which I doubt anyone will actually reach all the way to the bottom of this story to read.

“This journey is a rollercoaster, life is a roller coaster,” Lloyd said. “Nothing is ever just easy. If one thing is going well, you’re going to have two other things that are pretty crap in your life.”