FIFA Says Half The World Watched The 2018 World Cup; Here’s What That Actually Means

The numbers are in — and they’re quite impressive. Those wondering how many people watch World Cup matches have their answers: about half the world’s population.

The 2018 World Cup in Russia was a thrilling month-long ode to the world’s game. About five months after France lifted the World Cup in Moscow, FIFA released the complete TV viewership numbers on Friday.

In all, FIFA said 51.3 percent of the world’s population watched the World Cup at some point.

Find out how Russia 2018 was followed around the world

Here are the full numbers on how many people watched the 2018 World Cup.

How Many People Watch World Cup 2018 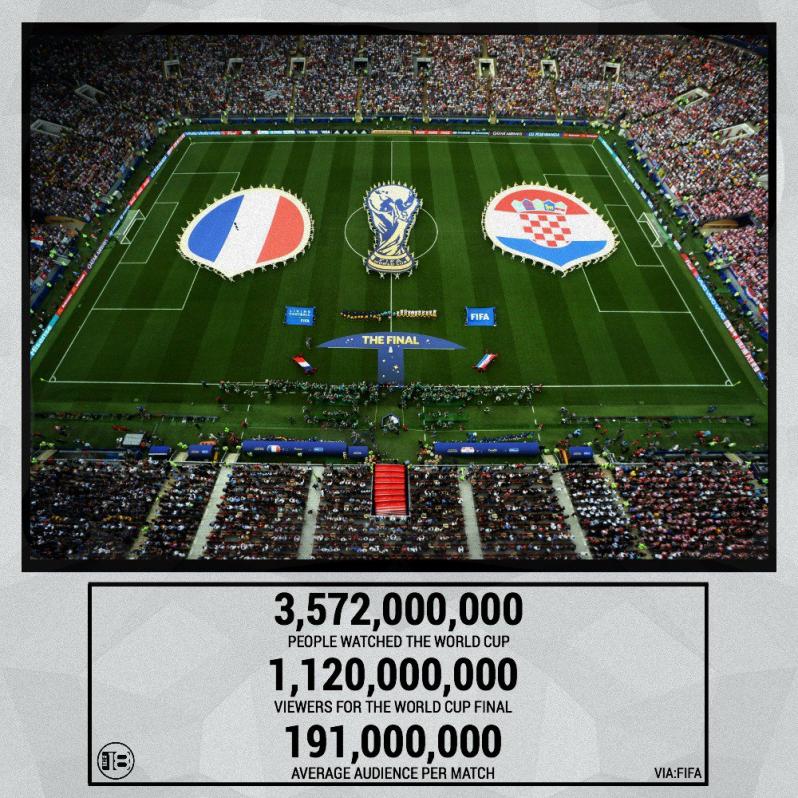 While the numbers look big, it’s important to understand what exactly they mean.

For starters, the idea 51.3 percent of the world’s population watched the World Cup is a bit misleading. FIFA used an estimated global population of 6.962 billion for this number. There are, of course, more humans on this planet, but FIFA only used those 4 and older for its numbers. Plus — and this is important for all these giant viewership numbers — that’s how many people watched for at least one minute.

The 3.57 billion viewership number just means that many people watched for at least a minute. But if you watch 60 seconds of a movie, you’re not really going to say you’ve seen the movie, right? In reality, only 2.49 billion viewers watched on TV for at least 30 minutes — the bare minimum in our opinion to say you actually watched a match. However, this number was a 27.7 percent increase over the 2014 World Cup in Brazil (compared to a 2.2 percent increase in one-minute viewership).

While overall World Cup TV numbers were up, two areas of the world saw significant decreases in TV viewership.

The Concacaf region (North America, Central America and the Caribbean) saw a 13.6 percent decrease in in-home viewing from 2014.

The primary reason for this is obvious: The region’s largest country (the U.S.) failed to qualify. Another reason for this is the fact the matches were played during the morning and early afternoon in the region, while the Brazil World Cup matches were mostly played in the late afternoon and evening. This likely led to the increase in digital viewership but decrease in overall viewership.

Africa and the Middle East (not sure why FIFA groups them together) saw the largest increase from 2014, going up 66.2 percent despite not qualifying a team into the Round of 16. South America also increased by nine percent, which just shows the passion those countries have for soccer to increase the already massive viewership of the Brazil World Cup four years prior.

The average viewership numbers for the World Cup final were down 5.1 percent from 2014 but up overall by about 1 percent.

When it comes to how many people watch World Cup matches individually, the final, unsurprisingly, turned in the highest global live audience average with 516.6 million tuning in (in-home viewers only). The two semifinals came in second (Croatia vs. England, 327.5 million) and third (France vs. Belgium, 314.6 million).

A couple Round of 16 matches clocked in at fourth and fifth. Spain’s loss to Russia drew 306.4 million viewers on average followed by Argentina’s comeback win over France at 301.8 million. 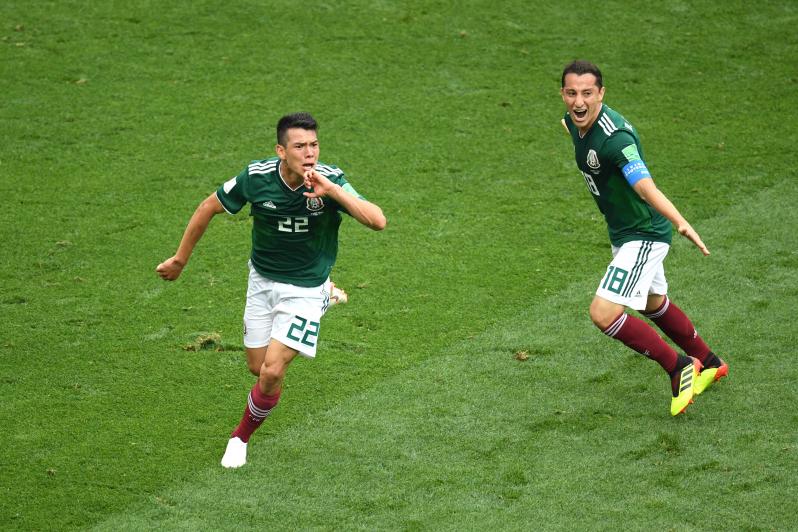 Mexico's 1-0 win over Germany was the most-watched group-stage match of the 2018 World Cup. Photo: Getty Images

One aspect that saw a large increase was digital viewership. Fox reported 38 million unique users on its digital content in the U.S. while Telemundo had about half that.

Asia had the largest total viewership with 1.559 billion individuals tuning in, almost as much as the rest of the world combined. Three of the top five viewing countries were from Asia: China, Indonesia and India (three of the four largest countries in the world not including the U.S.).

Europe had the second-most viewers with 711.7 million.

Europe was again second in proportion of viewership with a reported 86.1 percent of its population watching. Asia clocked in at 38.4 percent, while the Concacaf region had a respectable 56 percent.

Perhaps the biggest indicator of a World Cup’s success is the average live audience. The 2018 World Cup was a slight improvement on Brazil with 191 million viewers for an average match, 2.1 percent more than four years prior (187 million).

The group stage saw a 3.8 percent global increase and the Round of 16 was 8.4 percent more popular. However, the later rounds all saw overall drops, including 15.5 percent in the semifinals and 17.4 percent in the third-place game (we’re going to blame England for that).

What Should We Take From World Cup TV Viewership Stats

We already knew the World Cup was a big deal, so it’s not surprising to see such high numbers for how many people watch World Cup matches.

It is a little surprising the numbers did not increase by larger amounts over the 2014 tournament, despite how entertaining the 64 matches were overall. We might be able to blame Bruce Arena for some of that, keeping the world’s third-largest country out of the tournament, but it’s also worth remembering that soccer isn’t the only thing people have to worry about in the world these days.

You can check out FIFA’s full slideshow of World Cup viewership stats here.

It’s important to keep in mind that all the numbers FIFA released are designed to show off how popular the event was, with little incentive to show where numbers were decreased. The whole point of putting these viewership numbers out is to entice big corporations to shell out more money sponsor future World Cups.