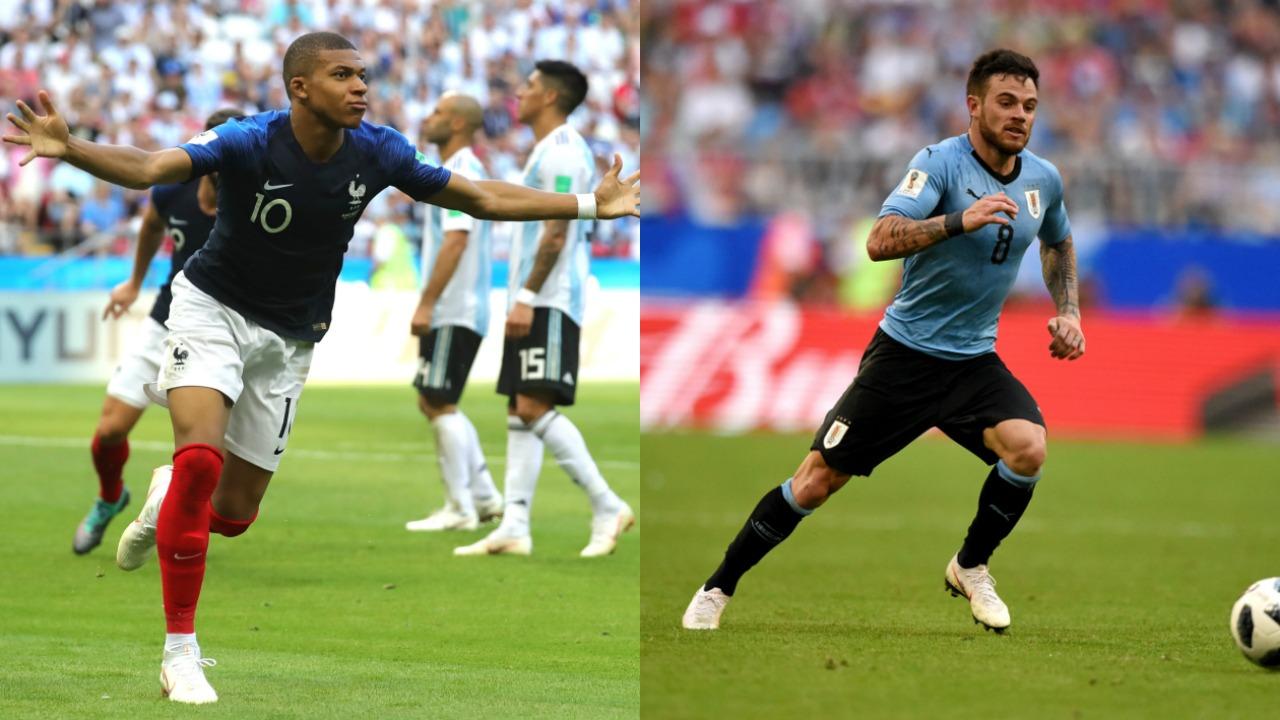 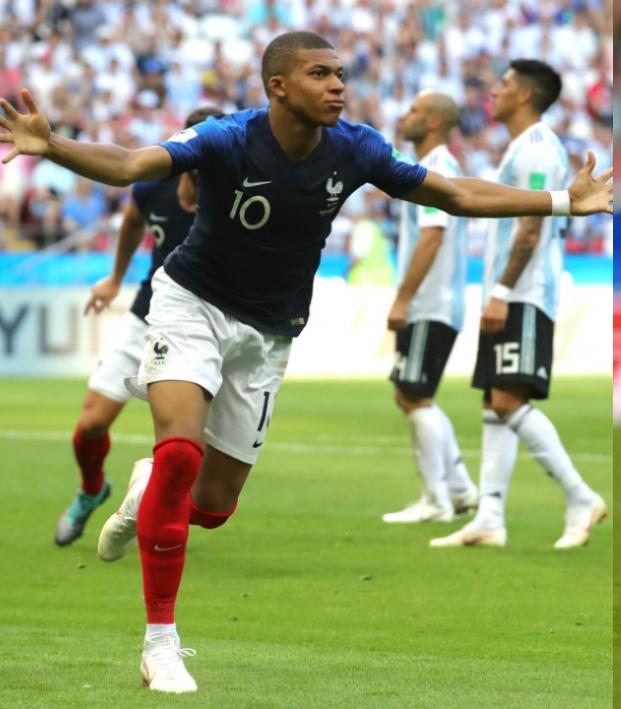 Connor Fleming July 3, 2018
The first quarterfinal of the 2018 World Cup will be a thrilling clash of styles between France and Uruguay.

France takes on Uruguay in the first quarterfinal of the 2018 World Cup at Nizhny Novgorod Stadium on Friday, July 6, at 10:00 a.m. ET. The match will serve as the tournament’s first truly fascinating clash of styles: the attacking zest of Antoine Griezmann, Kylian Mbappe and Paul Pogba versus the hard-bitten play of Diego Godin, Jose Gimenez and Luis Suarez. It’s all on the line with the winner advancing to the semifinal to meet either Brazil or Belgium.

France’s road to the quarterfinals included three unconvincing displays in the group stage, but a 4-3 victory over Argentina in the Round of 16 quieted the malcontents. With three goals in Russia, Mbappe has been the revelation of the tournament. The 19-year-old has outshone Griezmann, who has two goals but they’ve both been scored from the spot.

Perhaps most promising for France was the performance of Pogba. The Manchester United man is persistently put under the microscope, but his dominating display against Argentina showcased his ability to boss a match.

Defensively speaking, the three goals conceded against Argentina is something of a red herring. However, the support Blaise Matuidi offered to Pogba and N’Golo Kante in midfield — a selfless bit of play that also allowed Mbappe to thrive — will not be available against Uruguay since the midfielder picked up another yellow.

Uruguay, on the other hand, went 597 minutes without conceding a goal until Pepe’s header broke the stunning resistance. You could certainly argue Godin has been the defensive player of the tournament, and his pairing with fellow Atletico defender Jose Gimenez has been superb.

Much will be asked of Uruguay’s young midfield, anchored by 22-year-old defensive mid Lucas Torreira. Matias Vecino will also need a big game in the center of the park to combat France’s forays forward.

Further forward, it’s all about Rodrigo Bentancur and Luis Suarez, who’s scored two goals and added an assist this tournament. You’d certainly add Cavani to the mix, but the PSG striker’s fitness is a major concern after injuring his calf in the Portugal match. The two goals he scored in the Round of 16 were just stunning.

Luis Suarez and Edinson Cavani were born in 1987, just a few weeks apart in Salto - a town 300km in the interior of the country - and grew up 6 blocks from each other. pic.twitter.com/S9D8lUeoMw

Matuidi, who gave France great midfield balance against Argentina by supporting Pogba and Kante from the left-hand side, is suspended through yellow card accumulation. There were injury scares for both Djibril Sidibe and Benjamin Mendy, but both full backs will be available for the match.

The largest question mark for Uruguay surrounds the fitness of star forward Cavani. The PSG striker was forced off in the 74th minute against Portugal — leading to iconic photos of Cristiano Ronaldo sportingly assisting him to the sideline — after scoring a brace. The Uruguay Football Association has since confirmed that there’s no tear to his left calf muscle (an injury that likely would’ve ended his World Cup), but Cavani is still struggling with his movement and might not have enough time to properly recover.

“I include myself in the three million Uruguayans waiting for Edi,” Luis Suarez said on Tuesday. “I know it’s complicated because the injury isn’t easy and because there are few days left to recover, but I know that the desire, the attitude and the commitment he’ll have to be there, although it doesn’t depend much on him.”

Antoine Griezmann (ST): All the talk will surround Mbappe after his performance in the Round of 16, but this is still Griezmann’s team. Uruguay plays a completely different style to Argentina, and it’s one that won’t be as easily laid to waste by pace alone. A bit of craft and invention will be needed against Uruguay’s backline, and Griezmann is the man to provide it.

GOAL!!! @AntoGriezmann with the penalty for #FRA.

N’Golo Kante (CDM): This game could grow awfully frantic with France looking to impose its way of playing on Uruguay, but La Celeste won’t just park the bus. Whatever comes at France, Kante will be there to shut it down.

Raphael Varane (CB): Real Madrid’s Varane versus Barcelona’s Suarez … what more could you possibly want from a World Cup quarterfinal? It’s gonna be a battle of strength, insane footballing intelligence and every single trick in the book.

Luis Suarez (ST): Without Cavani, Uruguay will look to Suarez to both lead the attack and the defense from the front. The Barcelona striker will need to take advantage of any chances that come his way, but he’ll also need to hurry and harass Varane and Samuel Umtiti while France attempts to build from the back. In summary, Suarez will need to be a menace throughout — he’s ready for that task.

Luis Suarez scoring the first goal of the game from a freekick. Absolute genius.pic.twitter.com/RSzrBgYQLI

Diego Godin (CB): Although France will be without Matuidi, it’s unlikely Didier Deschamps will revert to a 4-3-3. Accordingly, Godin will likely be doing battle with Olivier Giroud throughout. Giroud’s play brings in the likes of Griezmann and Mbappe, but if Godin wins everything that comes at the Chelsea forward, France’s attack could look disjointed and ineffective.

Matias Vecino (CM): If Uruguay is to get a foothold in this game, it’ll need one helluva performance from Inter Milan’s Vecino. His role will be primarily defensive, but he’ll need to help transition into attack and get the most out of Bentancur.

There’s no way this one isn’t a nail-biter. France gave us an idea of its might against Argentina, but Uruguay’s record of four wins from four matches says it all — they’ve got the quality to make it to the semis.

However, Cavani’s injury is a big blow and this is probably a step too far for the young midfield. It’s still gonna take something special from France to win, but I think Les Bleus find that bit of magic in extra time.