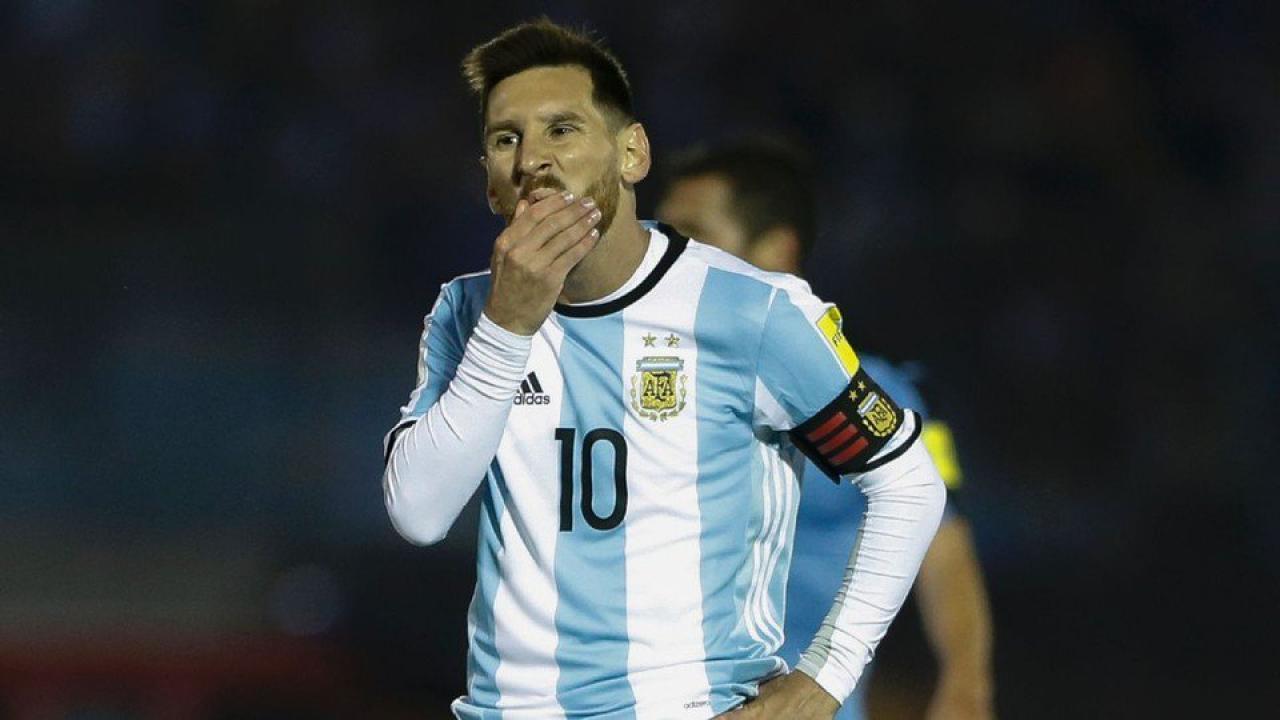 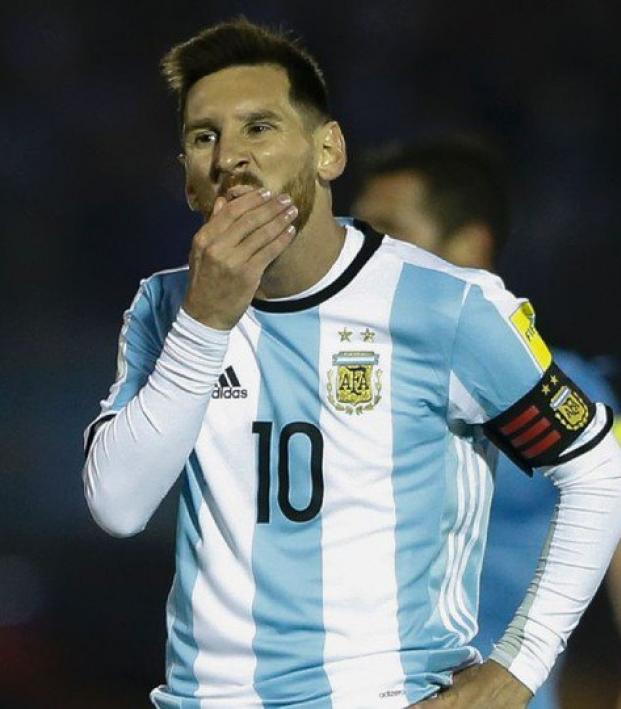 Travis Yoesting October 5, 2017
There is oh so much on the line with 60 countries still in contention.

Perhaps more than any other weekend every four years, this upcoming (extended) weekend from Thursday to Tuesday defines a nation’s success on the world football stage. Playoffs aside, this is the final week of World Cup qualifiers, and it’s going to be absolutely bonkers.

There is so much at stake for so many countries from traditional powers (Argentina, Netherlands) to the incredible underdogs (Syria, Iceland) and everyone in between. Only a handful of teams have already qualified and an incredible amount are still in the running.

Over the upcoming matches (two for every team in this round of qualifying), 18 countries will determine whether they’re going to play in Russia, with 11 more earning playoffs to live to fight another day.

The matches begin Thursday and continue through Tuesday night. Final group-stage matches all kick off at the same time to ensure fairness. Make sure your remote has batteries, your tablets and laptops are charged up and your phone has plenty of juice to check scores because there’s a boatload of soccer to follow over the coming days.

Here’s everything you need to know about the final World Cup qualifiers.

Eight Teams Are Already In 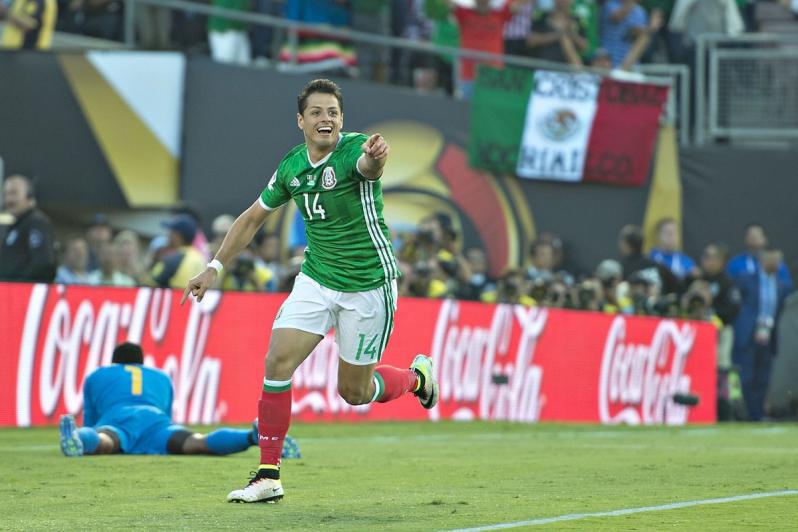 Chicharito and Mexico are already in. Photo: @ch17_chicharito | Twitter

While most of the world will be fretting over how their country does this weekend, eight teams are already in. They include: Russia (host) and Belgium from Europe, Iran, Japan, South Korea and Saudi Arabia from Asia, Brazil from South America and Mexico from CONCACAF.

60 Countries Are Still In The Running

UEFA has the most spots to hand out, as eight countries will clinch berths this week. The nine group leaders earn automatic qualification and so far only Belgium has ensured a spot atop its group. Not even Germany, despite a perfect 8-0 record in qualifying, has booked its trip. The eight best second-place teams will earn a spot in playoffs against each other, with four from that group winning a golden ticket to the World Cup.

All five berths from Africa are way up in the air, going to group leaders in five groups. Asia handed out four spots already but Australia and Syria face a playoff for the right to play the fourth-place team from CONCACAF, a region that also has two automatic berths left unclaimed. South America has seven teams fighting for three automatic places and one playoff against New Zealand. 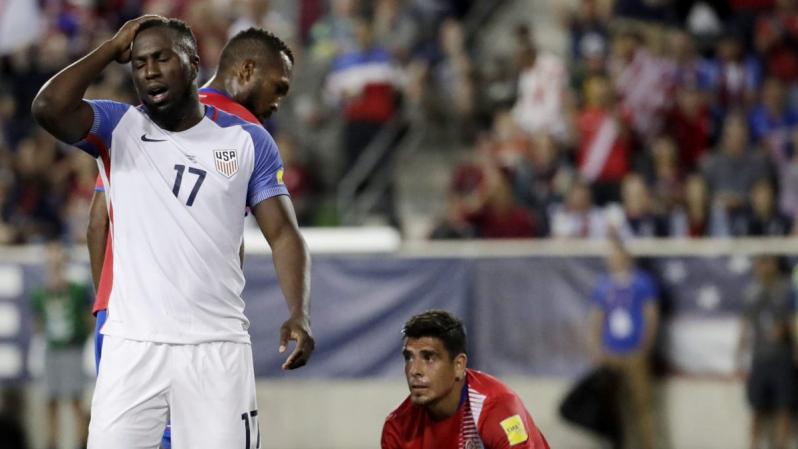 Jozy Altidore and the U.S. still have plenty of work to do to reach the World Cup. Photo: @NBCSN | Twitter

According to ESPN, the United States has an 83 percent chance of making the World Cup. While those may seem like good odds, remember the New York Times gave Hilary Clinton those same odds to win the 2016 U.S. presidential election. Last I checked, someone else is president.

The U.S. is currently in fourth and needs results against Panama at home on Friday and at Trinidad and Tobago on Tuesday. Costa Rica is nearly in while Panama and Honduras will fancy their chances. Trinidad and Tobago technically has a chance, but I think there’s a greater chance of all Americans agreeing about Donald Trump than the Trinidadians making it to Russia.

Lionel Messi And Cristiano Ronaldo Could Both Miss The World Cup 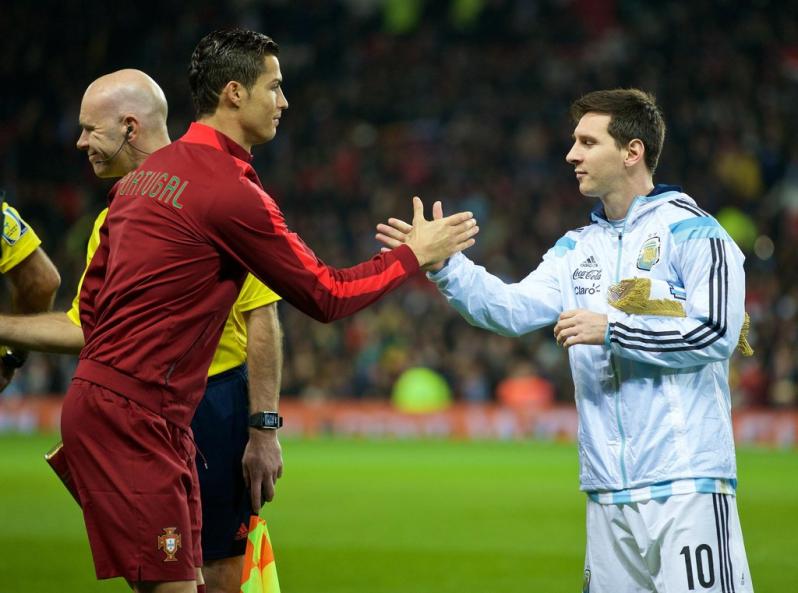 For those who love star power, it’s quite possible the two best players in the world could fail to reach the World Cup.

Argentina is in the most precarious position. La Albiceleste are currently in fifth in CONMEBOL, which would send them to an extremely winnable intercontinental playoff against New Zealand, but Chile, Paraguay and Ecuador are all nipping at their heels. That said, with presumably winnable games at home to Peru and at Ecuador, you’d expect a team with the attacking talent of Messi and Co. to qualify.

Ronaldo’s Portugal has clinched at least a playoff spot from Group B in UEFA, but an automatic spot isn’t a done deal with Switzerland leading the group. Fortunately for CR7 fans, Portugal plays an easy match at Andorra before hosting Switzerland in the final match on Tuesday, with a win pretty much clinching top spot in the group thanks to a much better goal differential.

Will Mexico Pay Back The U.S.?

It’s hard to understate how close Mexico was to missing out on the 2014 World Cup, where they performed quite well before bowing out to eventual runner-up Argentina in the Round of 16. If not for a last-minute goal from the already qualified U.S. against Panama, El Tri would have stayed home and Los Canaleros would have played in the intercontinental playoff to earn a trip to Brazil. That turn of events was the impetus for perhaps the greatest call from an announcer, who praised the U.S. and lambasted Mexico as Saint Graham Zusi put El Tri into the World Cup.

Now the boot is on the other foot. Mexico has clinched its spot in Russia but the U.S. is clinging to that fourth playoff spot. Mexico plays Honduras on Tuesday in the final World Cup qualifier and depending upon results from Friday, could send the U.S. to Russia by beating Honduras.

Mexico coach Juan Carlos Osorio said he wants all six points and called up a strong team, but whether that squad shows the same fight as the Americans did remains to be seen. 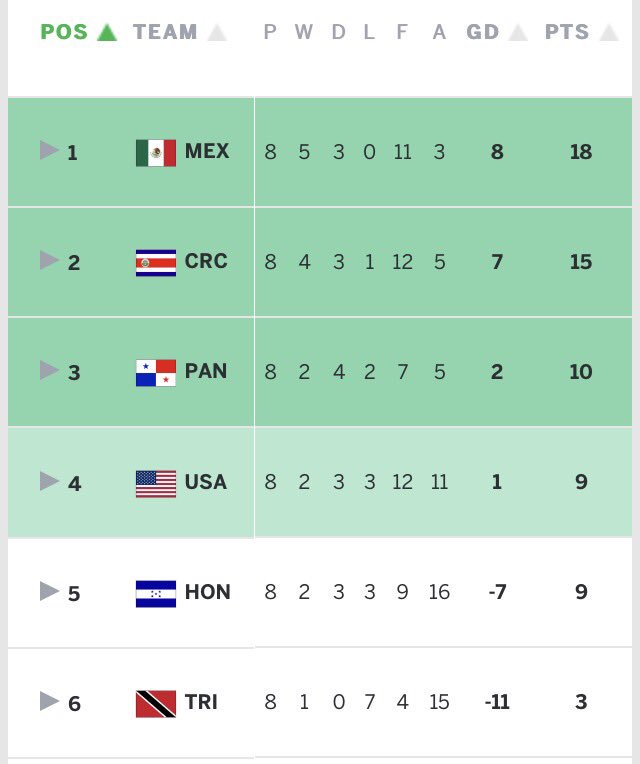 The storylines heading into the final rounds of CONCACAF qualifying are numerous, deep and downright CONCACAFy. In addition to the aforementioned Mexico payback, Panama has a chance to avenge that loss to the U.S. that cost Los Canaleros a trip to their first World Cup. A win against the U.S. would essentially lock up its berth to Russia.

Meanwhile, Trinidad and Tobago could exorcise some demons of its own. Back in 1989, the U.S. won 1-0 at Trinidad and Tobago to win a trip to the 1990 World Cup at the expense of the Trinidadians. While the Soca Warriors have little shot of reaching Russia, they could cost the Americans a trip with a win on home soil on Tuesday.

A World Cup Wouldn't Be The Same Without The Oranje

The Netherlands is not in a good place right now. Veterans of 10 World Cups, including three runner-up performances, the world’s brightest-colored team is in severe risk of missing the World Cup for the second time since 1990. 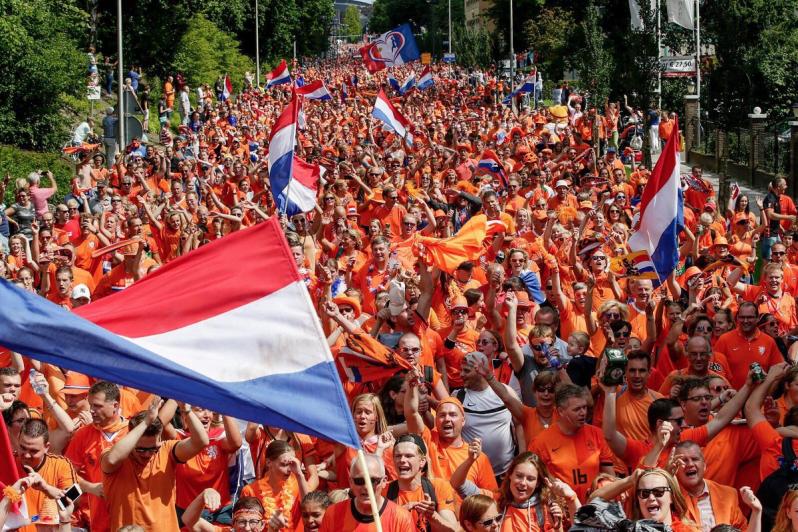 The Dutch sit in third in Group A with 13 points, behind France (17) and Sweden (16). Fortunately for the Netherlands, they play at last-place Belarus on Saturday and host Sweden on Tuesday. Unfortunately for the Netherlands, they have to make up six goals in goal differential in that span, plus Sweden hosts Luxembourg on Saturday, the team that has given up the most goals in the group.

To make matters more tricky, Bulgaria is right behind the Netherlands with 12 points, though after France drew Luxembourg last time out, who knows what will happen next.

Syria Has A Chance, Syriasly

It’s incredible that a nation absolutely shattered by a brutal civil war can even field a soccer team let alone have a shot at reaching the World Cup. But Syria has defied the odds.

There’s still a long road ahead for Syria. The team has to first beat Australia in a home-and-not-quite-home two-legged series this weekend. The two played to a 1-1 draw in Malaysia on Thursaday, and they play again in Sydney on Tuesday. The winner faces the fourth-place team from CONCACAF. Wouldn’t that be exciting to see the U.S. play Syria for a spot in Russia?

Do They Have A Soccer Team?

There are a couple nations that you don’t typically associate with soccer that still have a chance at reaching the World Cup. In addition to Syria, Burkina Faso, Cape Verde Islands, Gabon, Zambia, Uganda, Iceland, Cyprus, Estonia and Albania all still have a shot at going to their first ever World Cup. Additionally, Montenegro could qualify for the first time as an independent country. The country did qualify as a part of Serbia and Montenegro in 2006.

UEFA has more on the line than any other federation. While that is in part because of the number of berths available and teams fighting for them, it also comes down to some surprising parity and wonderful quirks of scheduling. Aside from the aforementioned Group A, a number of groups have a ton to play for. 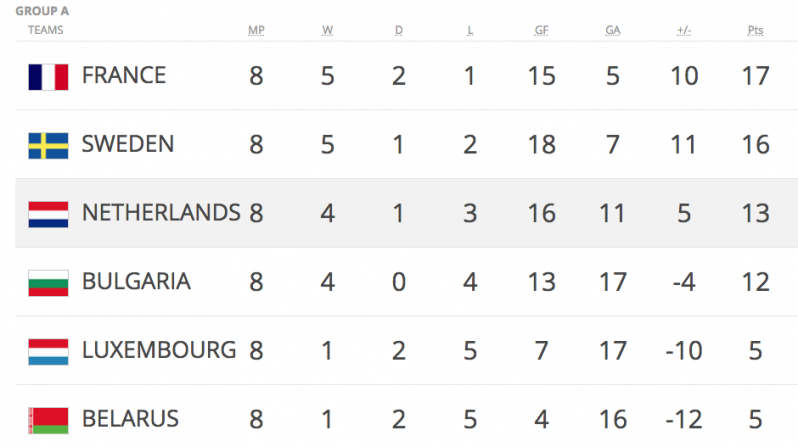 In Group F, England has almost clinched its berth but the second-place spot is up for grabs between three teams within one point of each other. Slovakia has the slight edge on 15 points and gets to play pointless Malta last. Slovenia and Scotland are both on 14 points and both have difficult schedules, playing each other and England in the remaining two matches.

Group H has some unexpected teams still in contention. While Belgium was the first to clinch qualification from Europe (Russia aside), Bosnia and Herzegovina (14 points), Greece (13), Cyprus (10) and Estonia (eight) all still have a shot, albeit a slim one in Estonia’s case. Bosnia and Herzegovina still has to play against Belgium, giving Greece a chance to overtake them to reach Russia. 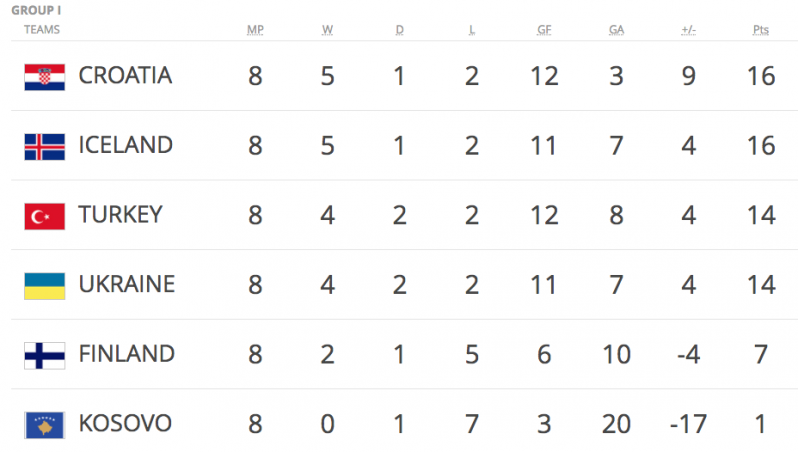 We save the best for last in UEFA. Group I is a straight up fustercluck. Croatia, Iceland, Turkey and Ukraine are all within two points of each other at the top. While Croatia and Iceland lead the way with 16 points each, both have to visit Turkey or Ukraine (14 points each) over the next few days. It’s anyone’s guess as to who makes it out of that group, but how intriguing would it be for Ukraine to qualify to play in the World Cup in Russia, a country that has invaded its territory unprovoked in recent years.

Brazil is in, but that’s all that’s decided in CONMEBOL. Uruguay is in second place with 27 points but could still be caught by seventh-place Paraguay at 21 and Ecuador on 20 is also in the running. Chile, despite all its Copa America success, could be left at home while Peru surprisingly is currently in the top four automatic qualifier spots. 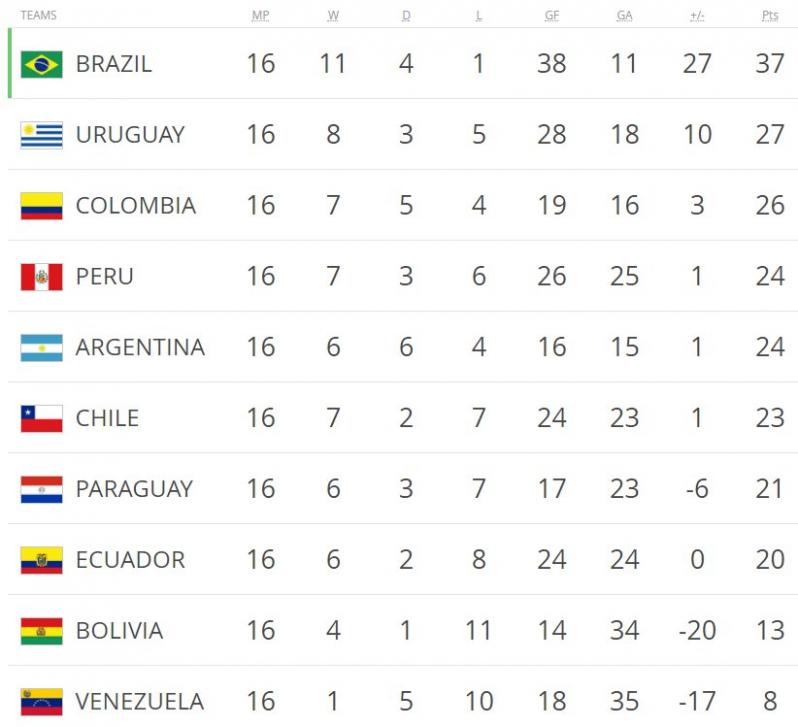 It’s really all a jumbled mess and it’s anyone’s guess as to how it will turn out. It’s feasible for both Alexis Sanchez and Lionel Messi to miss the World Cup. Neymar must be feeling pretty good about his situation right now.

Many of the traditional powers in Africa are not looking good. Cameroon and Algeria have already been eliminated while Ghana, South Africa and Senegal all face uphill battles to qualify.

Ghana sits in third in Group E with five points and needs a lot of help to overtake Egypt (nine points) and Uganda (seven). Burkina Faso and Cape Verde Islands both lead Group D with six points, but Senegal and South Africa are right in the thick of things. The latter two countries have played only three matches instead of four because their previous meeting will have to be replayed because of some match-fixing accusations in a match South Africa won 2-1. They’ll replay the match in November.

While Nigeria is looking good to qualify, Ivory Coast has a small one-point lead over Morocco going into the final two matches.

All the teams that qualify for playoffs over the next week will play between Nov. 6 and 14, with exact dates set once the matchups are set. South Africa and Senegal will play their makeup game on Nov. 14. 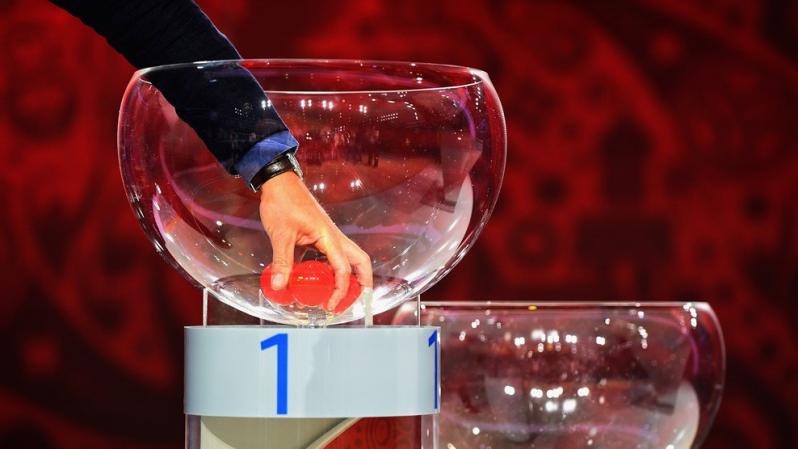 Most of the questions of who will be in the draw and who stays home will be answered in the next few days.