Connor Fleming April 15, 2020
All four Scandinavian clubs advanced to the final 16 from today’s play-in round matches.

Day 1 of the FIFA Stay and Play Cup is in the books, and while at times it was just ridiculous (an 8-2 scoreline, Twitch host Jimmy Conrad disappearing, people forgetting to unmute their mics), it was an entirely welcome and enjoyable afternoon after over a month of sporting radio silence and the total absence of communal events (competitive toilet paper hoarding aside).

Although I’ve learned that the atmosphere provided by the Twitch chat is an incessant scrolling triggered by viewers employed at typing “gg” for three hours straight, it was still nice to hear people narrate soccer games again — I particularly like when they say, “That’s something he’s been working on at home.”

Wednesday, April 15: The Play-in Round

It's a tournament made up of European clubs and their players. It runs from today through April 19 LIVE!

Profile: 24-year-old Tunisian attacking midfielder. He’s only appeared in seven of Marseille’s 28 Ligue 1 matches so far, with his last appearance coming back on February 8. He’s obviously had a lot of time to play FIFA 20 recently and should be one of the favorites. Also he's got Dimitri Payet.

Profile: 20-year-old Danish attacking midfielder. He’s appeared in 17 of Brondby’s 24 Superliga matches, scoring one goal and providing two assists. But he’s been more of a bench player since October, so he’s probably logged some serious minutes on the sticks over the past few months. Definitely a dark horse here. 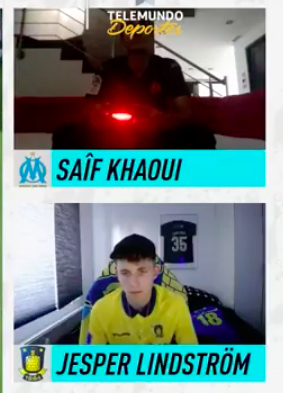 Khaoui spent all match in the darkness.

Jesper Lindstrøm is an absolute maestro on the controls. He's doing drag backs, rolls, fake shots, cuts and changing direction like Messi. Lindstrøm jumps to a 3-0 lead, but Saîf Khaoui's one memorable moment is to pull a goal back before using the Cristiano Ronaldo "calma" celebration. 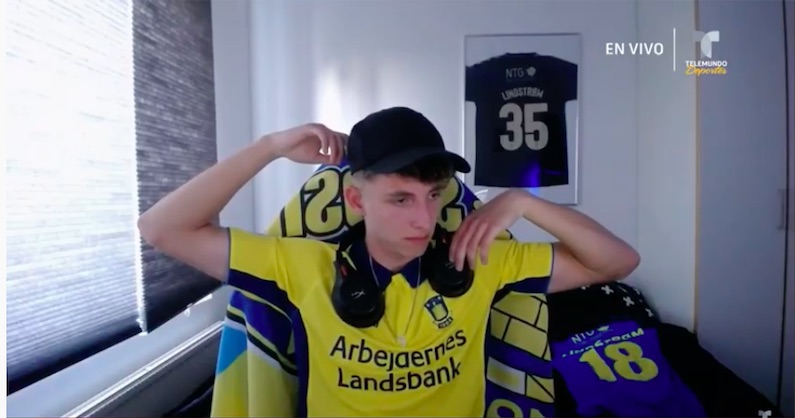 This is the best day of my life.

Lindstrøm says he’s “going to take it one game at a time.” He’s humble, but it turns out he’s actually an incredibly high-ranked FIFA player. One commentator speculates that he's in the top 0.5% in the world. What in the hell...

The #StayAndPlay Cup is well underway... @BrondbyIF could be early favourites

Next up for him and Brondby is Chelsea and César Azpilicueta in the Round of 16.

Manu Vallejo will be representing us in the @EASPORTSFIFA #StayAndPlay Cup!

Profile: 23-year-old Spanish winger. He’s appeared in eight of Valencia’s 27 LaLiga matches so far, scoring one goal. He’s been out with an ankle injury since January 4, so Vallejo should be another serious contender.

Profile: 24-year-old Swedish defensive midfielder. He appeared in all three of Djurgarden’s Swedish Cup group stage matches, scoring one goal and providing an assist. He’s a massive player for the club, so who knows how much time he actually devotes to FIFA. 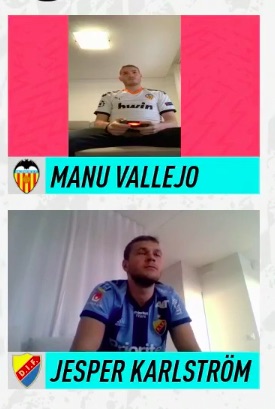 Manu gets his camera working eventually.

It's another Jesper, and he's just as good as the last one, building a 4-1 lead at halftime. The best moment is when Vallejo crushes a Djurgarden player at the top of his own area — "OOH! THAT COULD BE A RED!" screams the commentator. No card is given.

But look at the resulting free kick!

How to score a free kick on FIFA!

Djurgårdens IF have sailed through in the #StayAndPlay Cup

It finishes 5-2 but Valencia's Vallejo didn't play that poorly. Djurgarden’s goalkeeper had a great match, and Karlström promises him a bottle of wine in real life.

Karlström and Djurgarden play Borussia Dortmund and Achraf Hakimi in the Round of 16.

A on the pitch...
But also online?

Profile: 18-year-old Dutch attacking midfielder. The phenom enjoyed a remarkable start to the Eredivisie season and has three goals and six assists in 22 league games. The kid’s 18 — while others merely adopted the FIFA, he was born in it, molded by it. I'll call it now: Mohamed Ihattaren is my pick to win this thing.

Profile: 29-year-old Swedish winger. Didn’t appear in AIK’s Swedish Cup matches, but he was a big player for De Graafschap in the Netherlands last season. The old man is an unknown. 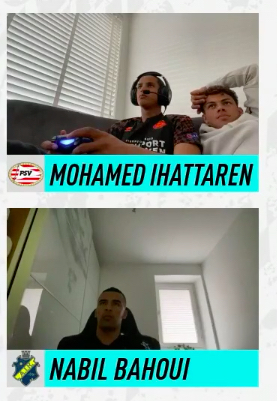 "I feel so close to you right now."

This, by far and away, is the match of the day. PSV's Ihattaren begins with his trainer on — it's not a promising sign — and then seems hellbent on dribbling it up the pitch with his goalkeeper. What's more, on camera, he's got a friend that's almost sitting in his lap. All the commentary is focused on this: Is that his coach? Is he just there to radiate good vibes? Why are they both so chilled out?

But Ihattaren opens the scoring, it was all a ruse!

However, AIK's Bahoui starts to dominate and pulls level before halftime while throwing a "Volta" celebration at the camera.

In the second half, Bahoui makes it 2-1 for AIK and things look over for PSV's 18-year-old wonderkid. But in the 73rd minute, Ihattaren earns a penalty, converts and shushes the camera while his friend goes wild!

The drama ends with Bahoui grabbing an 86th-minute winner (cue another "Volta" celebration) before scoring a fourth in stoppage time with his own avatar (the ultimate professional flex). 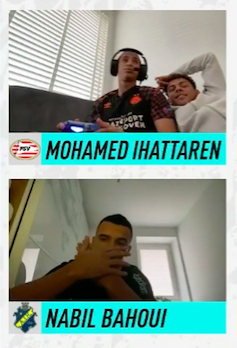 This one was spicy.

AIK and Bahoui play against Manchester City and Phil Foden next.

Mo’s going to be our @EASPORTSFIFA #StayandPlay Cup player

Profile: 18-year-old Danish winger. Despite his tender age, played in 17 league matches this season and recorded three assists. Another phenom in the tourney.

Profile: 27-year-old Finnish right back. He’s the club’s captain — a born leader of men and a consummate field marshal. 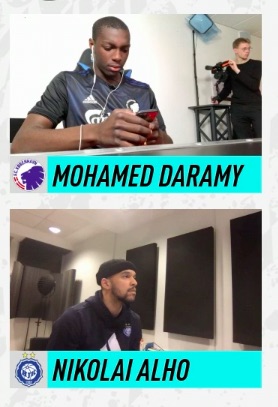 Daramy has his own film crew.

The final match of the play-in round was a dominate showing from Copenhagen’s Mohamed Daramy. He scored the opener in the sixth minute and never looked back, winning 3-0 and posting the only clean sheet of the day. This kid can play.

Daramy and Copenhagen play Sergino Dest and Ajax next.

There you have it, a clean sweep from Scandinavian clubs in the play-in round, proving that us northerly people are good at staying inside.

Here are the Round of 16 games: