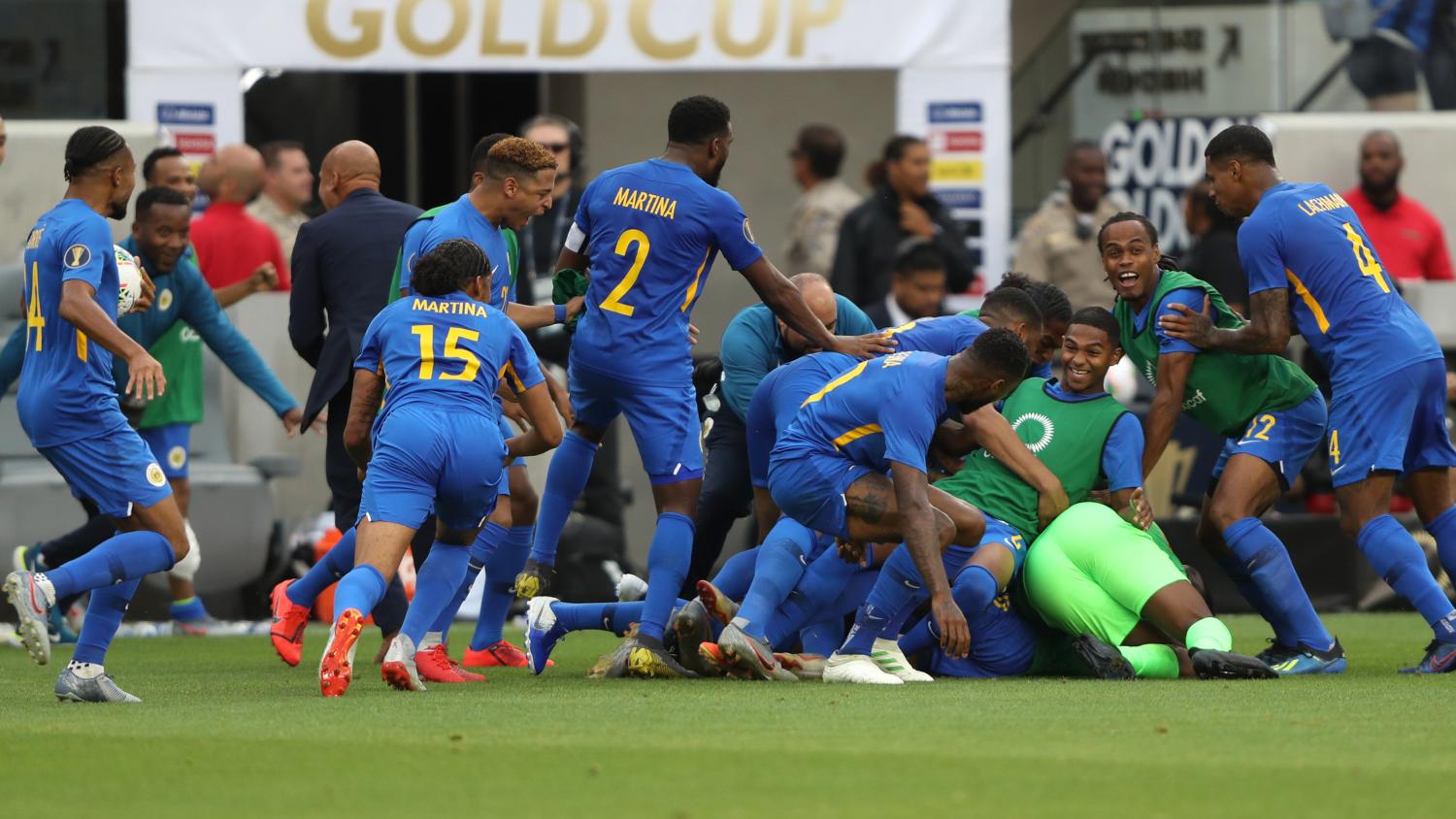 Curaçao drew with Jamaica and then watched from the stands as Honduras beat El Salvador to secure Curaçao’s advancement.
Getty Images

Gaari struck a 93rd-minute golazo to stun Jamaica with a 1-1 draw at Banc of California Stadium in Los Angeles. The draw, combined with Honduras’ 4-0 beat-down of El Salvador later in the evening, meant tiny Curaçao, a nation of 160,000, is in the quarterfinals of the Gold Cup for the first time ever.

Jamaica finished atop Group C with five points while Curaçao and El Salvador were even on four points and Honduras last with three. Curaçao took second place — and a spot in the knockout rounds — thanks to goal differential (0 to -3). Honduras, which had nothing but pride to play for, smashed its regional rival El Salvador in the nightcap of the Gold Cup doubleheader with Curaçao players in the stands, celebrating wildly with some well-earned popcorn.

But what transpired to get to that point was just as amazing.

Coming into the match, Curaçao knew it needed at least a point to have a chance of advancing. Even a win wouldn’t ensure a spot in the quarterfinals if El Salvador won its match against Honduras later in the evening, but there was hope.

Jamaica scored early through Shamar Nicholson but Curaçao actually dominated possession by the tune of 58-42. But the team was made to wait for a goal until the 93rd minute when Gaari blasted a long-range winner.

Play of the Game presented by @sprintlatino

After the match, Gaari, a defender who plays for RKC in the Dutch Eredivisie, said he didn’t really think about the shot, he just took the chance. The ball was laid off to him by Leandro Bacuna, a Cardiff City midfielder.

Remarkably, Curaçao almost won the match with a late effort zipping just wide. A win would’ve put either side top of the group.

Of course, the draw wasn’t the end of the night for Curaçao, which still had to wait around to see if Honduras would help it out. After beating Honduras on Friday, Curaçao keeper Room, who made 15 saves, celebrated with El Salvadoran fans in the crowd. On Tuesday, Curaçao players were in the stands cheering on Honduras against El Salvador.

The match was tied 0-0 at halftime, making for nervy watching from the Curaçao players and fans. When Honduras scored its third goal through Bryan Acosta in the 75th minute, all but ensuring Curaçao would go through on goal differential, the Curaçao players went wild. Honduras had to win by two or more goals for Curaçao to move on.

Up next for the upstarts? A date with either the USMNT or Panama on Sunday in Philadelphia, whichever team tops Group D after their match on Wednesday night.