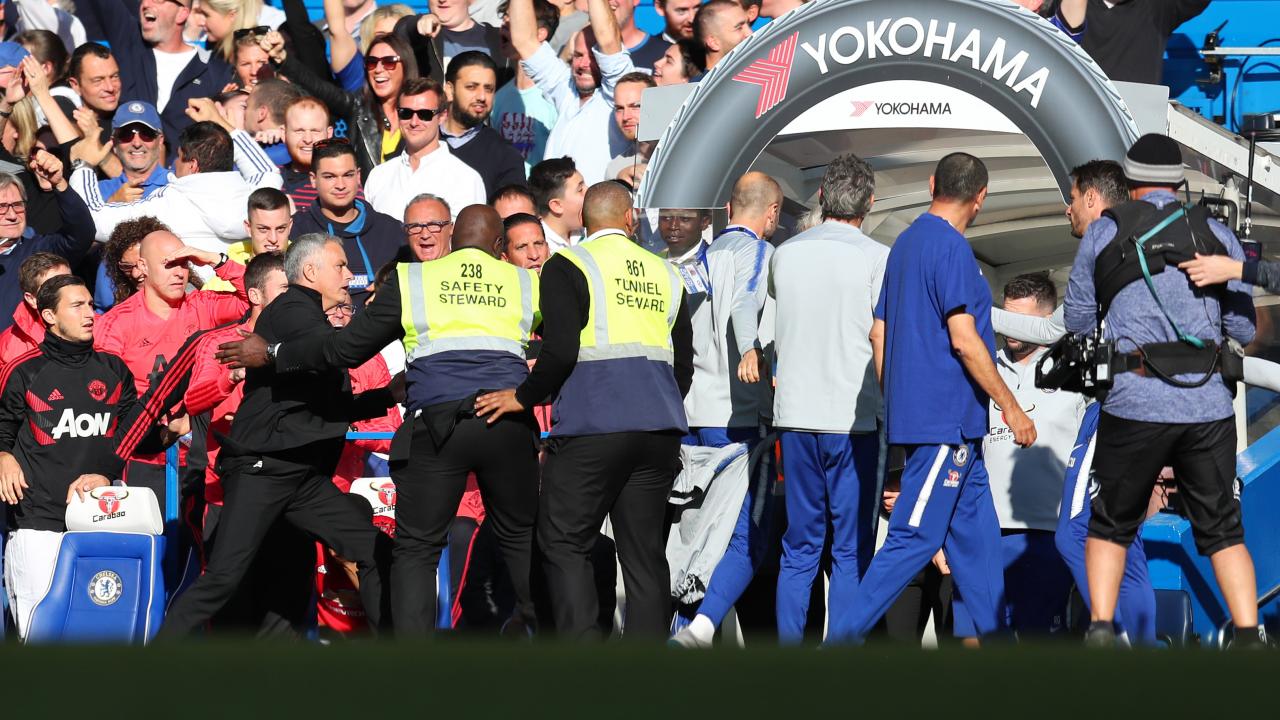 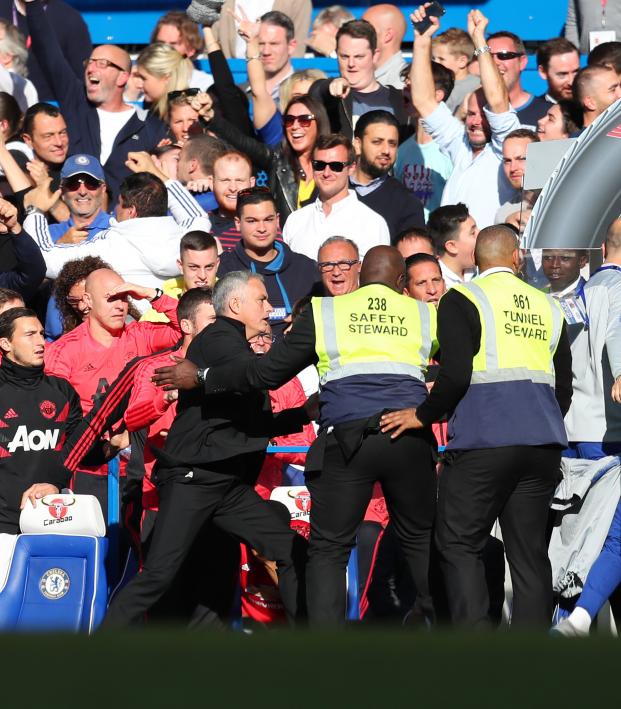 Chelsea-Man U Dissolves Into Hysterical Childishness In 97th Minute

Travis Yoesting October 20, 2018
Once again, a great match involving Jose Mourinho becomes all about him.

We should be used to this by now, but for some reason it still comes as a surprise.

Another big match involving Jose Mourinho became all about the Portuguese manager, despite an enthralling Chelsea-Manchester United match in the first 96 minutes on Saturday at Stamford Bridge.

Ross Barkley scored in the sixth minute of stoppage time to earn a dramatic 2-2 draw and keep Chelsea’s unbeaten season alive after Anthony Martial scored twice in a thrilling second half. But the match dissolved into madness in the moments after Barkley’s equalizer as Mourinho responded to one big act of childishness with another.

The first bit of immaturity came from Chelsea's Marco Ianni, who ran out to celebrate right in front of Mourinho and the Manchester bench.

Marco Ianni celebrates with a fist-pump directly in front of Mourinho and then runs back in front of him which clearly incenses the Portuguese manager who gets up and tries to confront the Chelsea assistant coach. Scenes. #CFC #MUFC pic.twitter.com/Ynq9hhyOPq

Ianni, the second assistant coach (after three "assistant coaches" because reasons), showed a bit of poor sportsmanship, but Mourinho’s reaction was completely out of line. The former Chelsea boss leapt out of his seat and charged at Ianni.

The @ManUtd manager was absolutely furious as @ChelseaFC equalised in the dying seconds of their @premierleague clash!

After things calmed down a bit after the match, Mourinho held up three fingers to the crowd to once again reiterate he’s the winningest manager currently in the Premier League with three EPL titles (all with Chelsea). So essentially Mourinho was mocking Chelsea fans for titles he won for them. What?

It all kicked off on the touchline after Chelsea's late equalizer. #CHEMUN pic.twitter.com/qHsB3EMuMv

Wait for it. Jose Mourinho holding up three fingers (to signify 3 titles at #CFC) to the Chelsea fans after the game, moments after a huge melee and Manchester United let in a 95th minute equalizer.

But something tells me Mourinho wasn’t really mad at Ianni and the fans so much as he wanted the media to focus on his absurd antics after the match instead of the fact his club threw away a late lead with some lackadaisical defending.

After the match, Mourinho tried to downplay the incident and said he accepted an apology from Ianni and had moved on.

"The 97-minute game was so good that we have to focus on that."

Jose Mourinho says that @ManUtd were the best team on the pitch and deserved all 3 points at Stamford Bridge.

Again, this is classic Mourinho, putting the attention on himself instead of his team, for better or worse. When things are going well, it helps his players focus on the task at hand; when things are going poorly, Mourinho turns into a circus, as happened when he was pushed out at Chelsea in December 2015.

So then let’s focus on the match itself.

Chelsea came out the better side in the first half and took the lead in the 21st minute through Anthony Rudiger’s powerful noggin. The German defender easily escaped Paul Pogba marking him for a wide open header on a corner kick.

But Chelsea couldn’t build on its lead and in the second half the game flipped. Like it did against Newcastle United before the international break, Manchester United actually looked like a decent team in the second half when Mourinho lifted the reins on his team, allowing some attacking football to be played.

It resulted in two goals from Martial, the first in the 55th minute, though Chelsea fans will argue it shouldn’t have been allowed due to a foul in the buildup.

There were no questions about the second goal in the 73rd minute, with Martial lashing an unstoppable shot into the bottom far corner.

It looked as though Manchester United would hand Chelsea its first loss of the season, but the home side was boosted by six minutes of added time. The Blues needed all six minutes as Barkley scored in the 96th minute after the Red Devils defenders stood around and watched as Chelsea took three straight uncontested shots.

David De Gea can’t save them all, though he tried. The rest of his team, not so much.

But, Mourinho ensured the focus would be on him instead of his poor defense in the final moments.