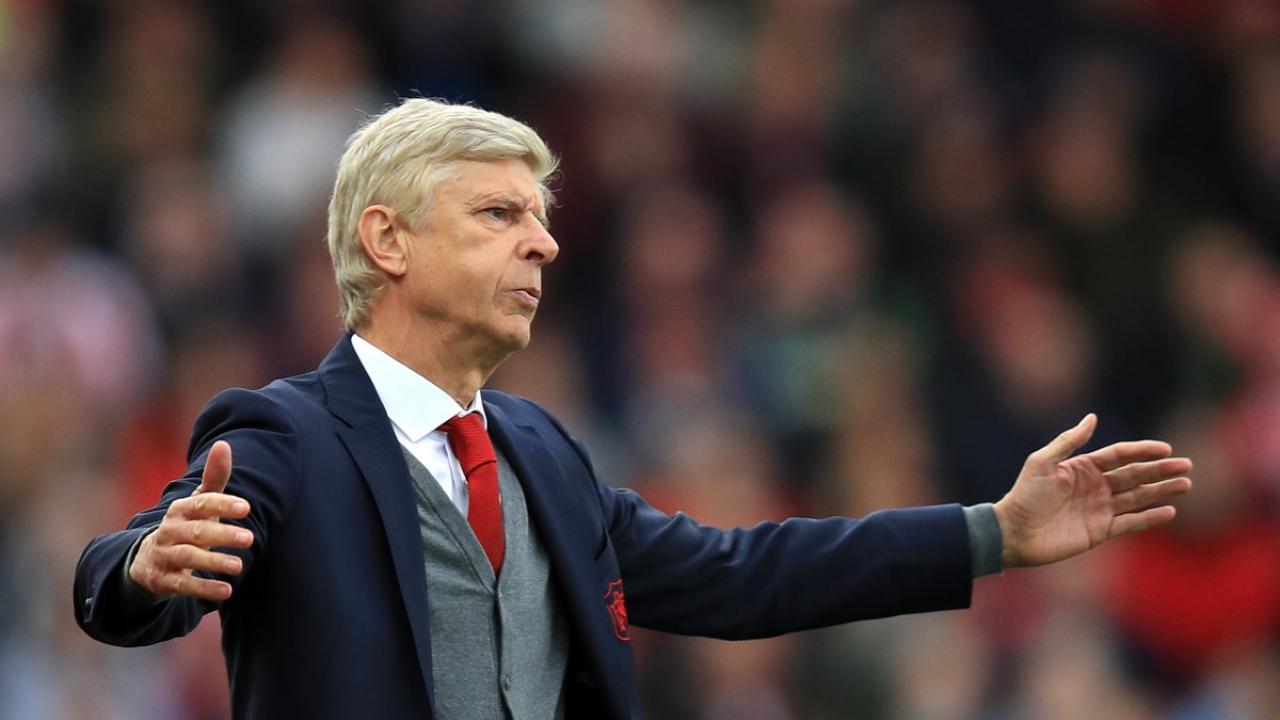 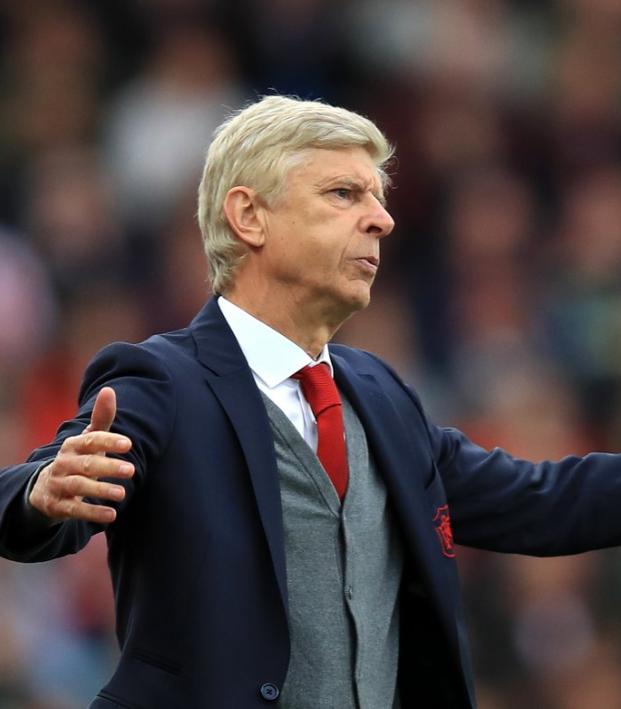 Arsene Wenger Is More Fun The Older He Gets

Travis Yoesting January 5, 2018
Arsene Wenger was given a 3-match touchline ban for inappropriate behavior toward match officials, but that’s silly because we're having fun.

The institution that is Arsene Wenger was handed a three-match touchline ban and a $54,250 fine for a confrontation with referee Mike Dean after Arsenal’s 1-1 draw with West Brom on Sunday. The Wenger ban is nothing new for the Frenchman, who served a four-match touchline ban for a similar behavior last year. And Wenger didn’t even deny these accusations, fully admitting to what he said and standing by his criticism.

The most recent incident in question came after the Gunners gave up a late penalty to allow West Brom to equalize in the final minutes. The penalty was the definition of soft (like the jammies Arsenal was wearing that day), but fell in that nebulous area of being close enough to go either way.

Wenger reportedly attacked Dean verbally in his changing room, questioning his integrity for allowing Arsenal to squander two points against a relegation-threatened team.

I totally get why the English FA punished Wenger. They want to protect their referees to attempt to maintain the integrity of the game. If the FA allows the most senior figure in the entire league to trash officials, then people will start to realize the English officials are no good. And the FA can’t have that. They want you to believe their referees are just fine. But maybe the referees aren’t fine.

While most of his arguments stem from his teams performing below standard, Wenger does make good points, including this recent comment quoted by the Guardian.

“There are two countries in Europe where you have professional referees, in Italy and in England, and not one English referee will go to the World Cup,” Wenger said. “But everything is all right. We cannot say a word against it because they’re untouchable. That is the truth. It’s not only me that judges them.”

Wenger spoke out again over another penalty that cost Arsenal two points in Wednesday’s entertaining 2-2 draw with Chelsea. He sticks by his criticism of officials, standing firm as if he doesn’t care if he gets his tie flipped back in his face.

"I'm in England for 21 years, I try to serve this game with honesty and integrity and when I have something to say I will say it," Wenger said. "On that front, nothing will change. Never."

Wenger isn’t trashing referees to try to get them to make future decisions in his favor. OK, he totally is. But he’s also doing it out of the magnanimous desire to improve the game of football in England.

The Bundesliga and Serie A already have VAR while La Liga will be adding it soon. Meanwhile English pundits complain that VAR would decrease the amount of debate after a soccer match. Can you imagine a world where when a match is over the pundits have to talk about tactics, skills and performances instead of whether or not a referee made the right decision? Talk about the Dark Ages. 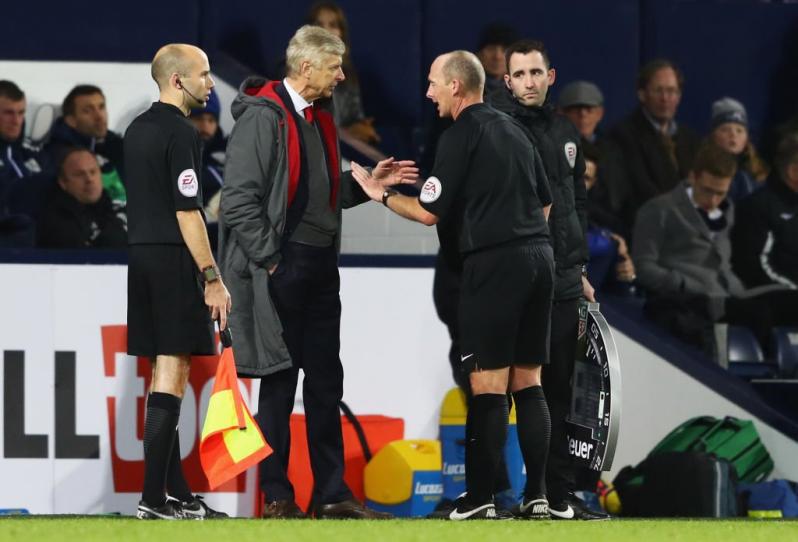 We won't be seeing this for a few games. Photo: @SquawkaNews | Twitter

Wenger is right: Referees in England suck. But you know what? Referees in Italy and Germany and Spain and Mexico and — god-forbid — the U.S. suck too. It’s a fact of life. Wenger shouldn’t be punished for pointing this out any more than he should be punished for proclaiming French wine is better than English beer. (For the record, everything is better than English beer, except maybe English food.) At least in other countries VAR helps the referees get the calls right, most of the time.

But there is one positive to the recent Wenger ban: The 68-year-old appears to be loosening up as he gets on in years.

After the Chelsea match on Wednesday, Wenger was affable enough to joke about suicide, because that worked out so great for Logan Paul.

Wenger asked about how he would have reacted if Zappacosta had scored, not hit crossbar at 2-2.
"Maybe I would have commit suicide"

Then on Friday, Wenger suggested with a suspension from the FA he’d be able to enjoy some time off to go to the inauguration of Liberian president George Weah, a former player Wenger discovered and brought to Monaco decades ago before Weah won the Ballon d’Or.

Wenger says he's been invited to attend George Weah's inauguration as Liberian president. He's then asked if he will attend: "Maybe if I am suspended [by the FA] I will have time to go."

Unfortunately for Weah and Wenger, the FA only gave him a touchline ban instead of a suspension, meaning he’ll be in the stadium on Sunday for Arsenal’s FA Cup match against Nottingham Forest. Nottingham didn’t miss the opportunity to take a jab at the Professor.

Mr Wenger, if you'd like to upgrade your stand ticket to a hospitality package then you can do so by following this link. #NFFChttps://t.co/nLGrdSD50S

See how much fun we’re having when Wenger trash talks referees? Wouldn’t it be great if everyone spoke his or her mind all the time? Maybe? OK, what about everyone except Jose Mourinho?

The Wenger ban isn’t going to stop him from calling it like he sees it, especially as he grows more senile with age. It’s not going to stop Arsenal from dropping points from a winning position. And, thankfully, it won’t stop the Gunners from being the most entertaining team this season, attacking like all-stars and defending like schoolboys.

The best games have been at the Emirates this season:

Very entertaining, not sure Mr Wenger will agree. pic.twitter.com/Owg52VrUfk

Unfortunately, the Wenger ban might prevent him from confronting referees over the next three matches, and that’s a loss for us all.