Connor Fleming December 15, 2017
Simeone says he’s okay with allowing the spice to flow because the spice must grow.

It’s not football’s best kept secret, but Atletico Madrid manager Diego Simeone has confirmed that much like Radamel Falcao and Diego Costa before him, 26-year-old center forward Antoine Griezmann will be allowed to leave the club for “a once in a lifetime chance to play for a certain team.”

Griezmann has long been linked with moves to a who’s who of mega clubs (Manchester United, Paris Saint-Germain and Barcelona, most prominently), but Simeone’s admission only adds more fuel to next summer’s all-consuming conflagration of transfer debauchery.

Griezmann is not expected to leave the club in the January transfer window. 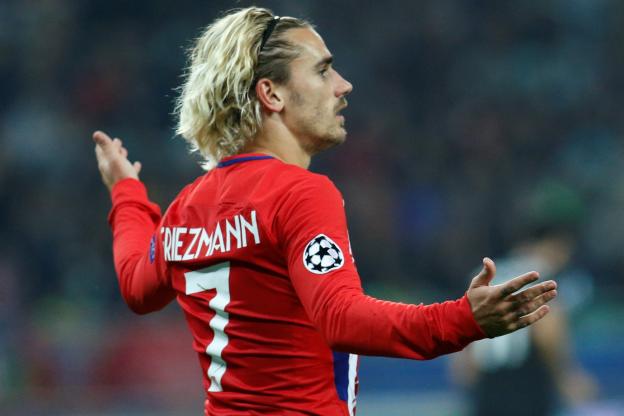 The French international signed a contract extension with Atletico back in June shortly after the club’s summer transfer ban from FIFA was upheld by the Court of Arbitration for Sport, a ban that’ll be lifted in January. However, while the extension made him the highest paid player in the side, it only extended the terms of his previous deal by one season — from June 2021 to June 2022 — while his release clause remained at roughly $118 million.

For a player turning 27 in March and obviously among the greasiest and filthiest on the planet, he’ll fetch a much higher price than that, especially with the only real suitors being clubs for which money ain’t a thing (Man United, PSG, Barca and Real Madrid).

His mentality'd be a big question but if he could make a step forward&cast off his bottling in final thing..Cose besides that he has a skillset that could help Barca a lot if used right. pic.twitter.com/HfcQKeu83S

Griezmann has been a force for Atletico since joining from Real Sociedad in 2014, but he’s yet to win anything of note at the club apart from a 2015-16 UEFA Champions League runners-up medal. Atletico are hanging tough in La Liga — they’re yet to lose a league match this season — but their early elimination from the Champions League after drawing twice with Azerbaijani champions Qarabag has probably done something to trigger Griezmann’s professional biological clock.

Simeone recognizes that the attacker has done everything in his power to help the club over his three and a half year stay, and that’s why El Cholo is more than happy to allow the player to live his best life.

“Of course Griezmann will be able to leave at some point, the same way (Diego) Costa and Arda Turan were allowed to leave,” Simeone told l’Equipe. “I love my players a lot and I love to see them grow. I am not ungrateful. If a player comes to me and says: ‘Coach, I have a once in a lifetime chance to player for a certain team, I want to leave. If he did all he could for me as Griezmann does, I’ll say it’s no problem. I know that he needs to grow.”

Griezmann has recently admitted that playing alongside Neymar and Kylian Mbappe at PSG would be a dream come true, but Manchester United have long been connected with the player, and Griezmann and Paul Pogba share a certain sort of bromance.

You can tell Pogba is a really good friend to griezmann.

Unlike those Atletico fakes. They really do love eachother :( pic.twitter.com/i57yNooTyT

Having successfully dealt with high profile departures of attackers like Arda Turan, Mario Mandzukic, Jackson Martinez, David Villa, Costa and Falcao in recent times, it’s difficult to predict the effect the Frenchman’s departure would have on the club, but replacing a player many consider to be among the 10 best on the planet is a job you’d really only trust Simeone with.