Connor Fleming November 14, 2021
The Spirit upset the OL Reign at Cheney Stadium with goals from Sanchez and Trinity Rodman.

With the OL Reign taking center stage at Cheney Stadium in Tacoma on Sunday, all eyes were on the attacking riches of the No. 2 seed in the NWSL playoffs, including the USWNT duo of Megan Rapinoe and Rose Lavelle, France’s Eugénie Le Sommer, Germany’s Dzsenifer Marozsán and Wales’ Jess Fishlock.

They were collectively outplayed and humbled by the Washington Spirit’s 19-year-old sensation Trinity Rodman and 22-year-old attacker Ashley Sanchez.

The Reign got off to a historically good start by scoring the earliest goal in NWSL playoff history inside three minutes. Rapinoe exchanged passes with Marozsán before picking out Le Sommer at the far post with a perfectly weighted ball.

Rapinoe’s mood at that point in time: 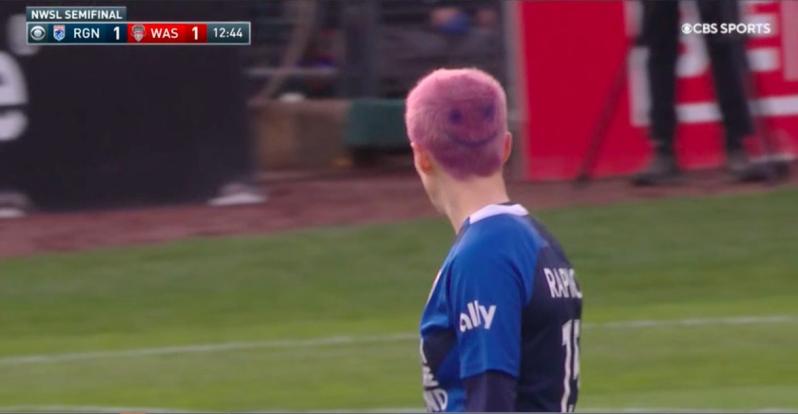 Rapinoe went with the smiley face in this one.

But Rodman, the Rookie of the Year-elect, had showcased her creativity with an early ball that caused confusion on the Reign backline before demonstrating her energy with a tackle inside the Spirit’s own half, and then she pulled her team level with the coolest of finishes in the 12th minute.

Rodman chased a long ball over the top from Sam Staab before a composed first-time finish that made her the youngest goalscorer in NWSL playoff history at 19 years and six months.

Rodman again had the ball in the back of the net before the end of the first half with a powerful header, but the teenager was a yard offside.

Rapinoe and Le Sommer both had a couple chances to score the Reign’s second, but they continued to place their efforts just wide of the post, whereas Sanchez almost connected with Rodman on a cutback that also went wide for the visitors.

But the Spirit found the winner in the 68th minute through Sanchez, who finished with a saucy chip from an acute angle that Sarah Bouhaddi could do nothing about.

The Reign threw on attackers in search of an equalizer, but the home side finished with just three shots on frame from 23 efforts. It was a particularly frustrating afternoon for Lavelle, who was never able to influence things in the attacking third.

The Spirit meet the winner of Sunday’s later match between the Portland Thorns and Chicago Red Stars in the NWSL Championship on Saturday, Nov. 20 at Lynn Family Stadium in Louisville, Kentucky.