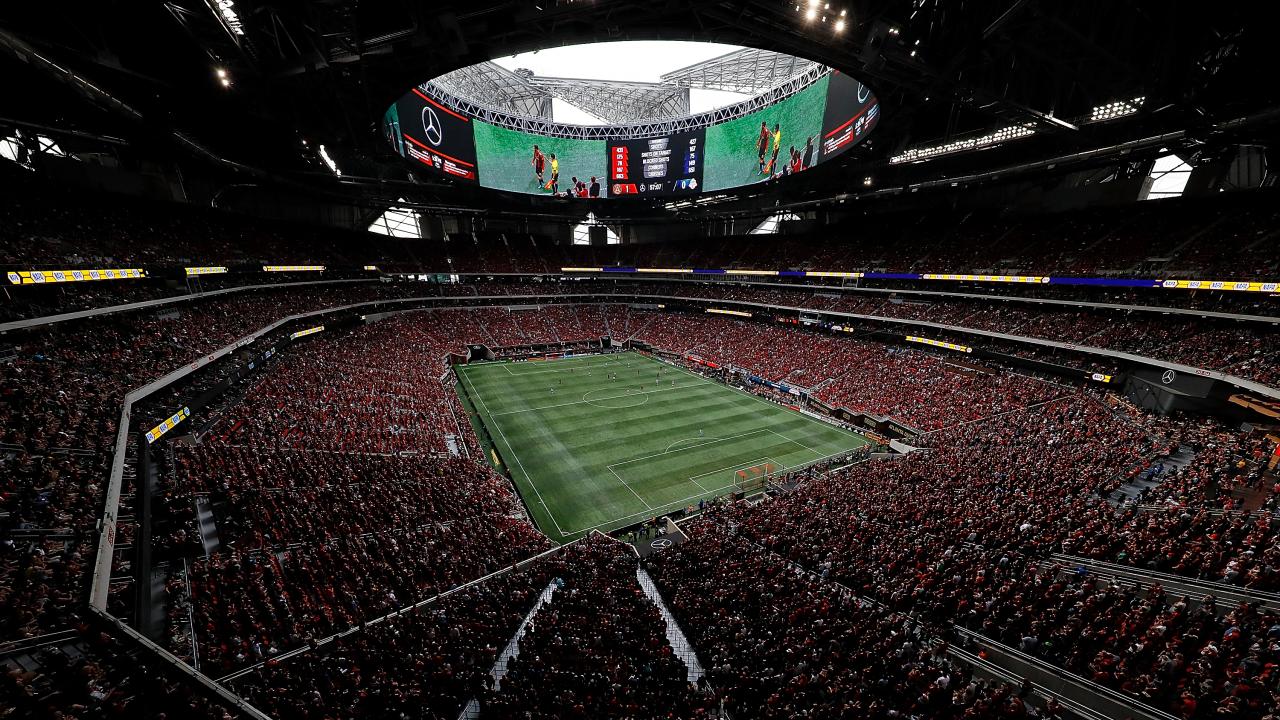 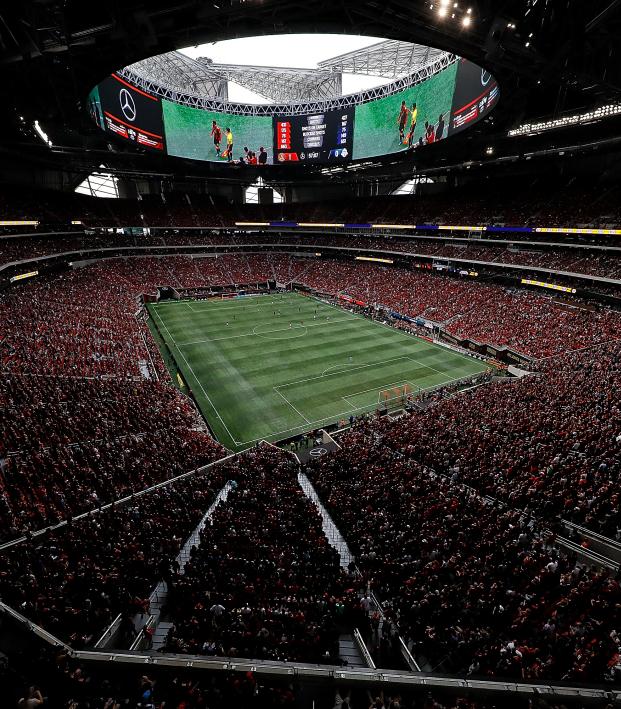 The 2021 MLS season marks the return of fans to stadiums across the league and, God willing, the death of fake crowd noise. Beginning with the start of the regular season on Friday, April 16, teams across the country will welcome back supporters at grounds with capacity generally limited to somewhere between 10 and 50 percent.

Some teams appear close to welcoming back their full support (including Orlando and Dallas), whereas the news is decidedly less rosy for the league’s three Canadian sides, all of which begin the campaign at temporary homes in the United States due to COVID-19 travel restrictions.

Here’s a rundown of the different approaches currently taken by the 27 teams in MLS, although it’s important to remember that things could change drastically over the coming months.

2021 MLS Fans In Stands: Which Teams Are Allowing Fans, And How Many?

Outlook: Atlanta’s home opener is scheduled for April 24 against the Chicago Fire. The plan for that match is to open the lower two levels at 50 percent capacity, meaning that there should be around 21,250 fans in attendance.

Officials say that stadium capacity will then be adjusted on a match-by-match basis.

Outlook: After a seven-game road trip to start the season, Austin’s historic first match at Q2 Stadium is scheduled for June 19 against the San Jose Earthquakes.

According to team president Andy Loughnane, a decision on the capacity for that match will likely be made “about four weeks” ahead of time, giving the club time to monitor the safety of in-person attendance at other sporting events across Texas.

Outlook: Chicago’s home opener is Saturday, April 17 against New England. The match will feature socially-distanced seating pods that are aligned with local health and safety protocols. About 7,000 fans will be able to attend the opener, and the capacity could increase to 25 percent (about 15,300) as the season progresses.

Outlook: Cincinnati’s first-ever match at West End Stadium is scheduled for Sunday, May 16 against Inter Miami. Season ticket holders (of which there are around 18,000) as desperate to be present, but the West End Stadium’s first few matches will observe limited capacity.

Outlook: The Rapids home opener is scheduled for April 24 against expansion side Austin FC. According to a recent statement from Kroenke Sports & Entertainment, the Rapids are working with the Colorado Department of Health and Environment regarding the return of fans for the home opener.

Outlook: Columbus is scheduled to play its first four home matches at Historic Crew Stadium before moving into New Crew Stadium in time for a July 3 matchup against New England.

The opening match against Philadelphia on Sunday, April 18 will also serve as a celebration of winning the 2020 MLS Cup. According to the Columbus Dispatch, up to 5,180 fans will be in attendance for that one.

Outlook: Dallas has its home opener scheduled for Saturday, April 17 against the Colorado Rapids. Socially distanced seating is in place, and “capacity for FC Dallas matches will be limited at Toyota Stadium in April and May.”

Up to 9,000 fans can attend the Rapids game with FC Dallas opting for 50 percent fan capacity for the first four regular-season matches.

Outlook: United’s home opener is scheduled for April 17 against NYCFC, and the club will reportedly be allowed to host up to 2,000 fans (10 percent). D.C. Mayor Muriel E. Bowser will then revisit those capacity rules later this month.

Outlook: The Dynamo’s home opener is against San Jose on Friday, April 16. BBVA Stadium will be operating at 30 percent capacity, meaning that approximately 6,500 fans will be allowed in.

Outlook: The Galaxy’s home opener is April 25 against the NY Red Bulls, and the club has already allocated “approximately 7,000 electronic tickets for that match to season-ticket members.”

Outlook: While LAFC is allowed to fill a third of its capacity for its April 17 season opener against Austin FC, attendance will reportedly be capped at a much lower percentage and is strictly limited to season-ticket holders.

Outlook: The Loons home opener is scheduled for April 24 against Real Salt Lake. For the start of the season, in accordance with the Minnesota Department of Health, Allianz Field will be operating at 25 percent capacity, meaning that approximately 5,000 will be in attendance.

Outlook: Inter’s home opener is against the LA Galaxy on Sunday, April 18. The match will be played “at a reduced capacity with full optimism that attendance numbers will ramp up as the season progresses.”

For the first three games, the stadium capacity will be 8,000.

Outlook: Due to travel restrictions between Canada and the United States because of the pandemic, Montreal begins the season contesting its “home” matches at DRV PNK Stadium in Fort Lauderdale, Florida.

Outlook: Nashville opens play at Nissan Stadium on April 17 against Cincinnati. The capacity will be temporarily capped at 33 percent, meaning that roughly 22,800 seats are available.

Outlook: The Revs home opener is April 24 against D.C. United. According to the latest guidelines, venues in Massachusetts can now operate at 12 percent capacity. This means that Gillette Stadium could host as many as 8,000 fans for the opener.

Outlook: Capacity at Yankee Stadium for the club’s April 24 opener against Cincinnati has been capped at 20 percent, meaning that 7,400 fans can attend.

Outlook: The Red Bulls open play on Saturday, April 17 against Kansas City, and the team has reportedly decided to keep crowds at 15 percent capacity for now (3,750).

Outlook: Philadelphia’s home opener is scheduled for Saturday, April 24 against Inter Miami. Outdoor venues can currently operate at 50 percent capacity in Pennsylvania, meaning that over 9,000 could be in attendance for that one.

Outlook: The Timbers welcome Houston to Providence Park for their home opener on Saturday, April 24. The stadium will allow up to 25 percent capacity, meaning that around 6,300 supporters will get in.

Outlook: RSL’s home opener against Sporting Kansas City on May 1 will have a capacity of 10,000, which is up from the 5,000 fans that were allowed to attend matches in 2020.

Outlook: The Earthquakes open play at PayPal Park on April 24 against FC Dallas, and the club has already “sold out” tickets for its first two home matches of the season. Capacity will be capped at 20 percent, meaning both matches will have an attendance of roughly 3,500.

Outlook: The Sounders welcome Minnesota to Lumen Field on Friday, April 16. Washington Governor Jay Inslee limited capacity at outdoor sporting events to 25 percent, so the Sounders will have approximately 7,000 fans for the first five home matches of 2021.

Outlook: Sporting’s home opener against Orlando is scheduled for Friday, April 23. The club is prepared to welcome approximately 6,500 fans for that one before adapting in accordance with health and safety protocols.

Outlook: Due to travel restrictions between Canada and the United States because of the pandemic, Toronto begins the season contesting its “home” matches at Exploria Stadium in Orlando, Florida.

Outlook: Due to travel restrictions between Canada and the United States because of the pandemic, Vancouver begins the season contesting its “home” matches at Rio Tinto Stadium in Sandy, Utah.