Travis Yoesting March 15, 2019
With one all-EPL matchup, at least one English team is guaranteed to reach the semifinals.

The 2019 Champions League quarterfinal draw set up some intriguing matchups for English Premier League clubs on Friday. Manchester City and Tottenham face off in an all-England clash while Manchester United drew Barcelona and Liverpool was paired with Porto. Ajax faces Juventus in the fourth quarterfinal.

The draw, two days after the conclusion of the Round of 16 on Wednesday, also set up the semifinals. The Tottenham-City winner faces either Ajax or Juve while the other side of the bracket will include the United-Barça and Liverpool-Porto winners. 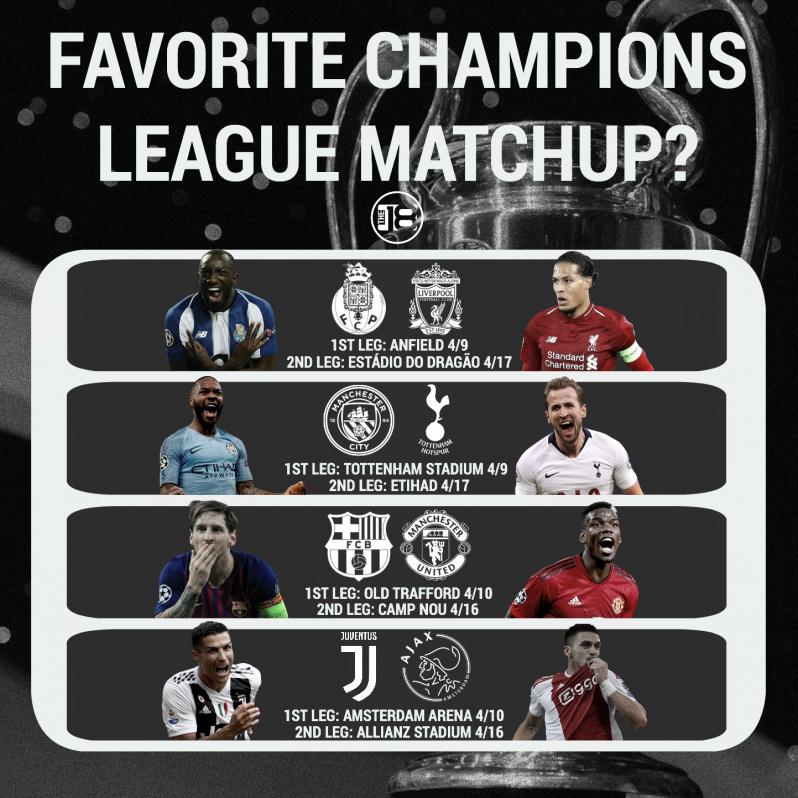 Four Premier League clubs reached in the quarterfinals for the first time since 2009, when Manchester United fell to Barcelona in the final. The Prem also did it the year before, when United beat Chelsea in the final.

In recent years, the Premier League has struggled in the knockout rounds. Last season, five English clubs reached the Round of 16, but only one made the semifinals (Liverpool, which lost to Real Madrid in the final). The last time the Premier League had three teams in the quarterfinals was in 2011.

Other major leagues, however, are not having banner years. With Real Madrid and Atlético Madrid ousted, Barcelona is the lone flag bearer for LaLiga, which has claimed the last five Champions League trophies. Last season was the first since 2010 that LaLiga didn’t have two semifinalists. The Bundesliga, meanwhile, didn’t qualify any teams for the quarterfinals for the first time since 2006, with all three Round of 16 squads eliminated by English competition.

So that leaves us with some interesting questions for the Premier League, which has struggled in Europe since Chelsea last won the title in 2012, with just two semifinalists and one finalist in that span. City will be the favorite against Tottenham and Liverpool will be favored against Porto, so an all-English final is still on the table. Tottenham probably would’ve preferred to play anyone but City, while Liverpool will probably be happiest with the draw.

Manchester United won’t be able to lose 2-0 in the first leg at home like it did against PSG if it hopes to get past Barcelona, unless it lucks out and Lionel Messi gets injured as Neymar was for the Ligue 1 champions.

Ajax will present an interesting problem for Juventus after knocking out Cristiano Ronaldo’s old club in the previous round. But it’s hard to imagine any team getting the best of the Old Lady over two legs after what it pulled off against Altético in the Round of 16.

Arsenal against Napoli represents the premier matchup of the quarterfinals, while Chelsea drew Slavia Prague, probably the weakest side left but one that pulled off a remarkable extra-time win over five-time champion Sevilla in the Round of 16 on Thursday.

Arsenal and Chelsea could meet in the final at Olympic Stadium in Baku, Azerbaijan, as they were drawn onto separate sides of the bracket. The other semifinals pit LaLiga contenders Valencia and Villarreal against each other and Benfica against Eintracht Frankfurt.

Which 2 teams will go all the way? #UEL | #UELdraw pic.twitter.com/DyB8ZJ5GXu

With six clubs in the last 16 in Europe, the Premier League has a great chance to take home some continental silverware.