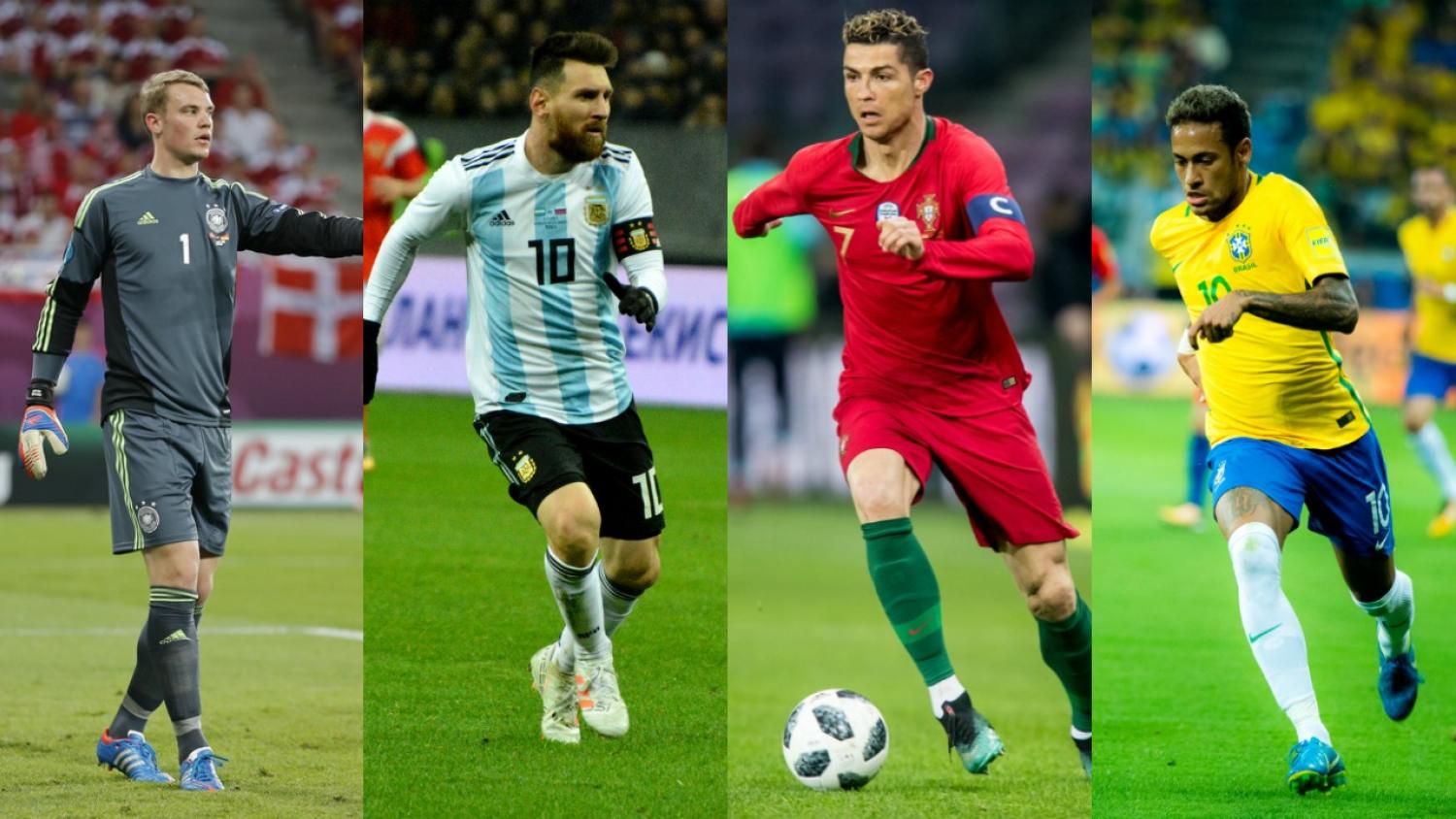 Your favorite soccer buckaroos run the rule over the 2018 World Cup.
Shutterstock

“Let there be light: and there was light.” That’s what God said when he sat down to start crunching out the Bible after a long period of crippling writer’s block, but it easily could’ve been what you said after finally getting your hands on The18’s World Cup predictions. Here you have all your favorite soccer niños trying their damnedest to captivate, stimulate and prognosticate for your reading pleasure.

Who are you cheering for?

Travis Yoesting (@TravisYoesting): Lionel Messi, Mo Salah, France to score a lot, Germany to win and Concacaf to not embarrass itself.

Bryce Badwan (@BBadss): Due to bloodlines, I'll be rooting for Uruguayos campeones, Campeones Del El Mundoooo. I'll also root for Messi because I have a heart. I'd also like to see countries that don't have the prowess of the big dogs succeed. I'm looking at you Peru. (More on them to come.)

Connor Fleming (@ConmanFleming): Mexico. I want to see Chucky obliterate Just Fontaine’s record of 13 goals in one tournament. I want to see Andres Guardado win the Golden Ball. I want to see Juan Carlos Osorio use the first-ever World Cup fourth substitute in extra time, cementing his reputation as the ultimate tinker man.

Who are you cheering against?

BB: Germany. This world is already getting taken over by machines. Don't need to continue this nonsense at another World Cup.

CF: Germany. I actually really like this German squad (particularly Marco Reus), but I never want to see a repeat champion.

Which nation wins it?

TY: France. So much talent, it would take a lot to knock them out. They're loaded in every position and, vitally, up front, which is important when it can be difficult to score as the tournament progresses and teams become more cautious going forward.

BB: Brazil. The Selecao got their swagger back. Not only is he an improved player, but Neymar's supporting cast this time around is so much better than the 2014 team. Fred? Julio Cesar? What even was that? I get the 2002 feeling from them, where they knew they were the best team in the world and they proved it every match. Joga Bonito is coming to Russia.

CF: Brazil. It’s one thing to have a squad of extremely talented individuals compiling individual highlight reels (France), it’s another to get all those players to thrive in harmony (Brazil). Neymar, Gabriel Jesus, Philippe Coutinho and Willian all seem to really enjoy playing together, and Tite has introduced some much-needed solidity in defense.

Which nation suffers the biggest disappointment?

TY: Germany. This team is just as talented as any, but it's hard to repeat and I don't think they make it back to the final, which is a disappointment in Germany.

BB: I'm really nervous with the shit show that is Argentina... but with that said, I'm going to go with Poland. Robert Lewandowski and company may have high expectations, but I don't think they get out of the group. They rode their quarterfinal finish at the Euros to a high FIFA ranking (because they barely played after) and didn't even impress that much at those Euros.

CF: Portugal. Heavy lies the crown of the European champions, and this team will either succumb to a shock elimination at the group stage or in the Round of 16 to Uruguay. The defense is past it, the midfield is underwhelming and Cristiano Ronaldo 2.0 isn’t designed to thrive in this kind of setup.

TY: Morocco. If they can get to the Round of 16, there's no reason they can't reach the quarterfinals.

CF: Uruguay. La Celeste were the most impressive nation in CONMEBOL qualifying apart from Brazil. 32 qualifying goals is an accurate measure of this team’s devastating quality in attack. The back is decidedly shaky with little defensive support offered in the midfield, but they’ll fly through Group A, defeat the Group B runners-up in the Round of 16 and then take on France in the quarters.

Who finishes in 32nd place?

TY: Tunisia. Two tough European heavyweights will make for a miserable tournament for Tunisia. Fans should prepare to make some Bouka Pomegranate Fig Smashes from our list of cocktails for every World Cup team.

BB: Saudi Arabia. I don't see much going for the Green Falcons. Uruguay and Egypt should take care of them and the sketchy Russians will surely get three points to open in tournament in front of the world before they crash and burn.

CF: South Korea. The Taegeuk Warriors won’t deserve to finish dead last, but three defeats from three games in the group of death will condemn them to that fate.

TY: Timo Werner. Leading the line for Germany kind of pencils you into the Golden Boot these days.

BB: Antoine Griezmann. I wanted to say Neymar, but winning both of these awards never seems to happen. Griezmann will Fortnite dance his way to plenty of goals for France.

CF: Edinson Cavani. Like always, Luis Suarez will be instigator in chief at the World Cup, but in a positive way. I think he’ll take on the role of provider next to Cavani, and the PSG striker will have the Golden Boot secured following the group stage.

TY: Neymar. He'll dazzle but fall short in the end.

BB: Neymar. Winning a World Cup for Brazil is his life goal. He's been waiting for this tournament since Juan Zuniga practically broke him in half. He won't disappoint.

CF: Neymar. Whether he’s finishing plays off himself or drawing multiple defenders with mazy dribbles and slipping passes through to Gabriel Jesus, Neymar will provide a lot of joy to the planet in Russia. It’s a shame that he sometimes acts like a total prat.

Who makes a massive transfer to one of the world’s biggest clubs following some fine showings in Russia?

TY: Aleksandr Golovin. The Russian midfielder will be one of the few bright spots for the host team.

BB: Hirving "Chucky" Lozano is a good one. But I'll stick with the Peru train and go with Christian Cueva. The No. 10 is already 26, but the World Cup will give him the exposure he lacks in Brazil. I have to throw in Nahitan Nandez with Uruguay. The young Boca Jr lad will have a lot of space to work in with Suarez and Cavani garnering attention. He'll also have two great targets on the end of his crosses.

CF: Aleksandar Mitrovic. After failing to earn the trust of Newcastle United manager Rafa Benitez, Mitrovic was duly loaned to Fulham and tore it up. Fulham desperately wants to sign him permanently, but Newcastle is waiting for a stellar World Cup performance to jack up his price tag. Mitrovic will have a great tournament with Serbia and a bidding war will ensue. Mike Ashley’s gonna love it.

Which player just blows it for their country and becomes a villain back home?

TY: Granit Xhaka. He's too likely to pick up a red card.

BB: I'm gonna go with Harry Kane, because that would just be hilarious.

CF: Willy Caballero. Following a knee injury to usual No. 1 Sergio Romero, Big Willy is now Argentina’s starting keeper. Over the past four seasons in the EPL he's only started 25 league games. As Loris Karius demonstrated in Kiev, when all the focus is on a team’s otherworldly assemblage of attacking talent, the keeper is then at risk of chillaxing and throwing the ball straight at Karim Benzema.