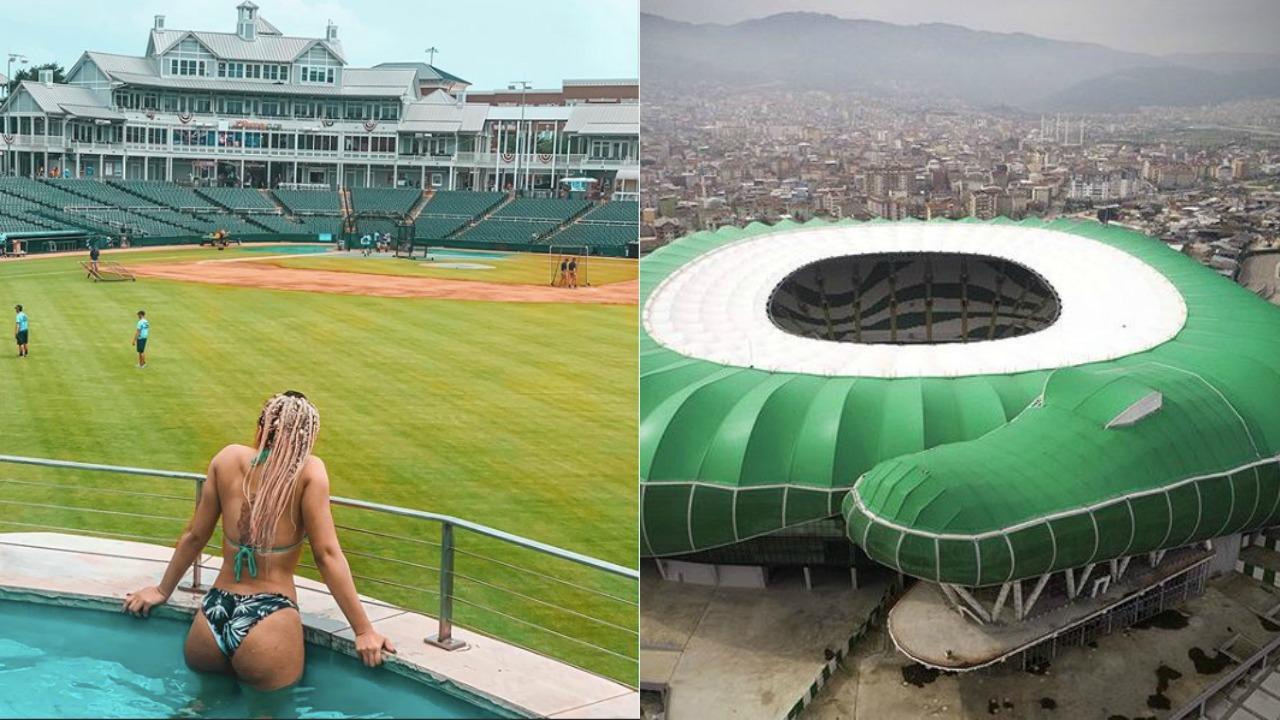 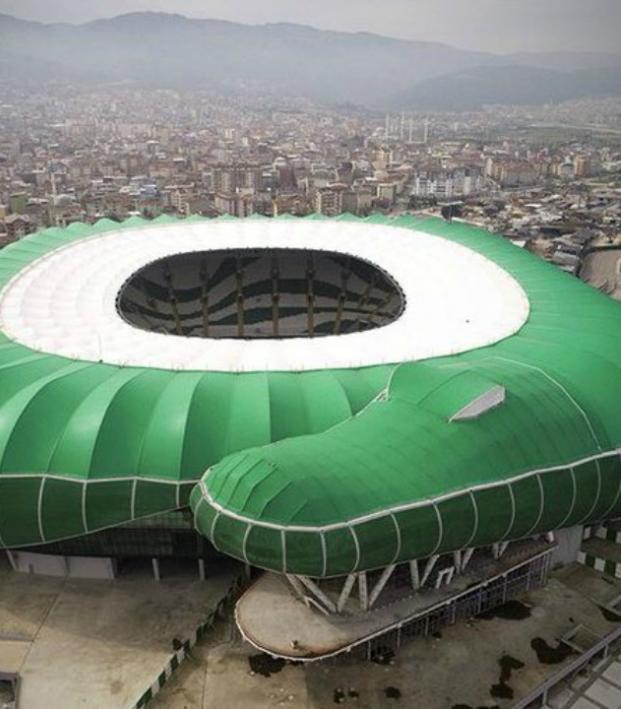 Despite the best attempts of stadiums built in the late 80s and early 90s to suck the soul out of everything, we’ve now entered an arms race in super-stadium building brought forth by mega-wealthy owners bent on redefining arenas as both works of art and places of entertainment. Still, there’s nothing like some of the weirdest stadium features that’ve withstood the test of time, and we’re more than happy to add some of the latest eccentricities to the fold.

Here are 15 designs and features that immediately capture the eye.

The Weirdest Stadium Features Across The World Of Sports

The Pavilion at Fulham’s Craven Cottage 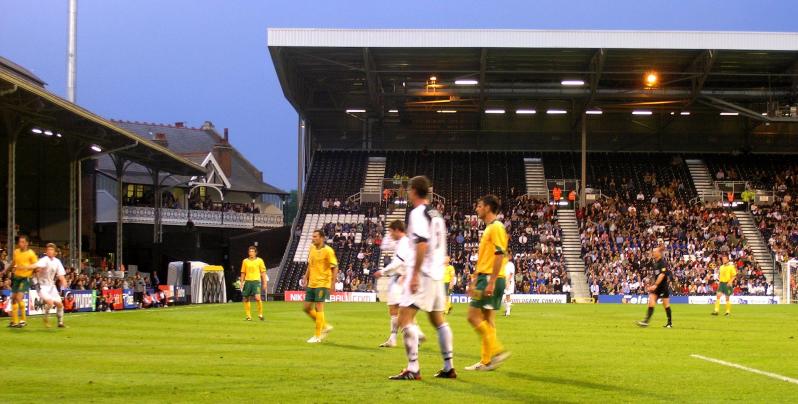 Opened in 1896 on the banks of the River Thames, stepping into Fulham’s Craven Cottage is like being transported back in time. Adding to the fantasy is the Pavilion, nestled in one corner between the historic Johnny Haynes stand and the Putney End.

The Cottage Pavilion is the location of the changing rooms and has a clubhouse and balcony where players’ families and friends traditionally watch the match. 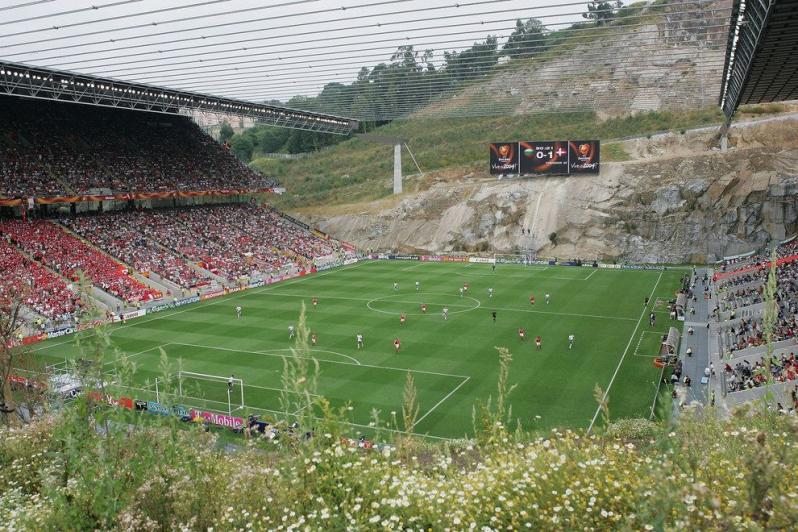 The stadium in action at Euro 2004. Photo: Getty Images

The Municipal Stadium of Braga was built in 2003 as a venue for UEFA Euro 2004 and is now the home ground of SC Braga. The stadium was carved from the Monte do Castro quarry that overlooks the city, and one end of the stadium features a rock wall goal backdrop.

Imagine the best way to take in a six-hour ball game: If you imagined floating around a lazy river with beer-in-hand, you are correct.

That’s exactly what the Frisco RoughRiders offer above the right-field wall at Dr Pepper Ballpark, and tickets to float are just $39, including all-you-can-eat brats, hot dogs, peanuts, chips and soda. 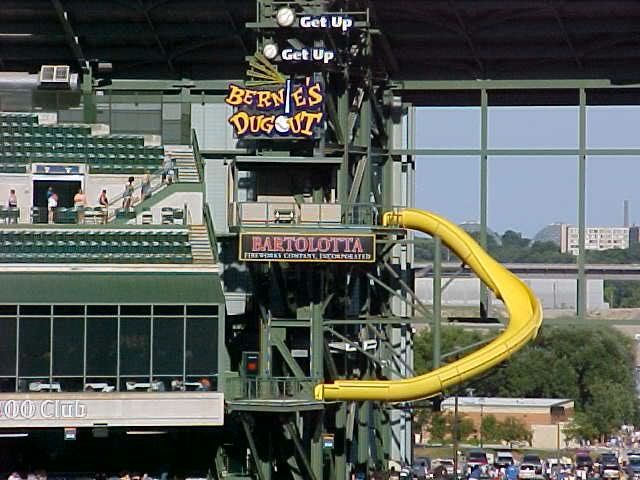 Take it from me, Miller Park in Milwaukee has one of the greatest tailgate atmospheres you’ll find. If you manage to actually make it inside the ballpark, you’ll get to experience the thrill of seeing Bernie Brewer, the team mascot, slide down to structural wonder following every home run. 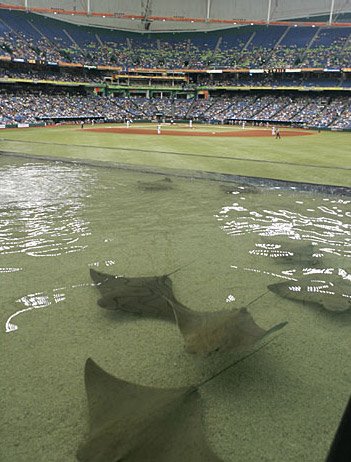 With its strange location, catwalks hanging from the ceiling, exposed bullpens and hauntingly stark interior, Tropicana Field has long been hailed as one of the worst stadiums in all of sports.

But just over right-center field is the Rays Touch Tank, a 35-foot home to three different species of rays. Seven players have hit home runs that’ve landed in the tank, most recently Kole Calhoun in 2018. 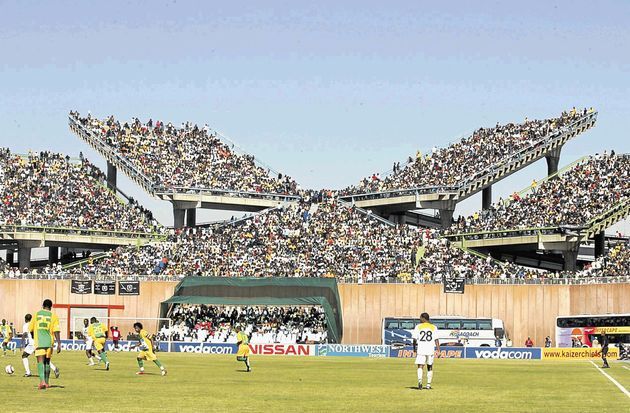 Strangely enough, South Africa boasts two stadiums with floating stands that were built in the 1980s, Mmabatho Stadium and Odi Stadium. It’s not just some small gimmick either — the stadium holds 59,000 spectators.

The slopes at Chivas’ Estadio Akron 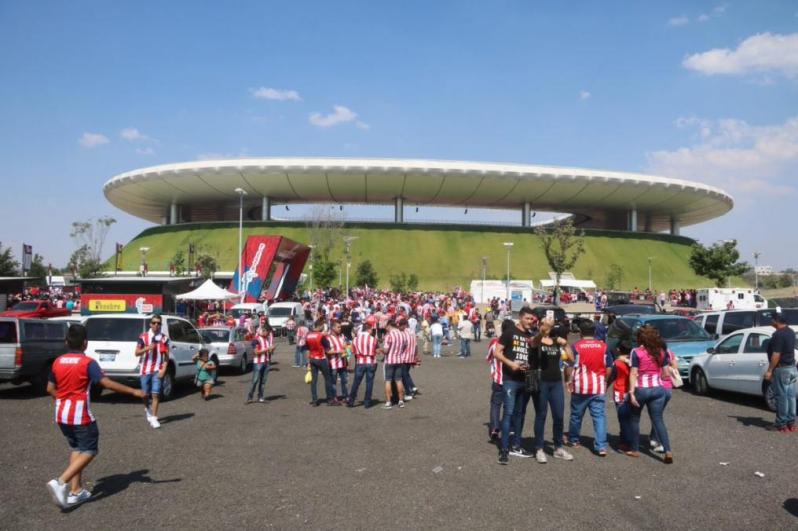 Opened in 2010, Chivas’ Estadio Akron was volcano-inspired and they pretty much nailed that aspect of it.

Read more about Chivas' stadium in this interview with facility and turf manager. 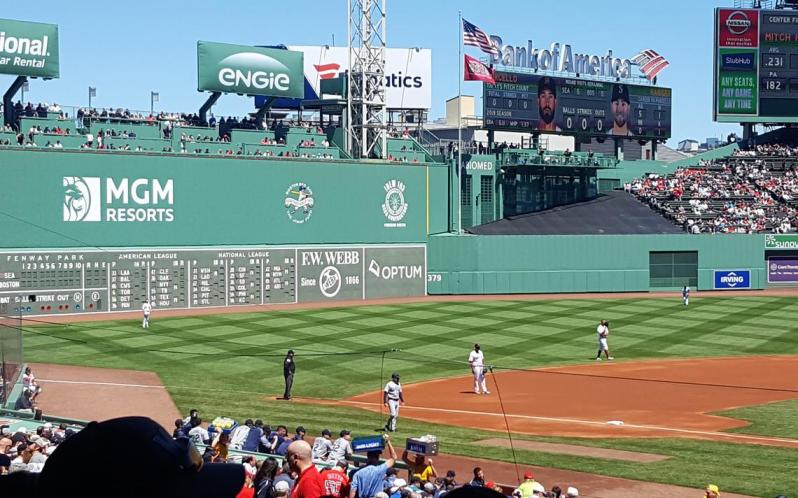 I know this one, you know this one, it’s a soft selection. But still, Fenway is maybe the only park in America that has what European’s would call “atmosphere” from the first pitch through the last, and the sight of the Green Monster adds to the singleness of the experience. 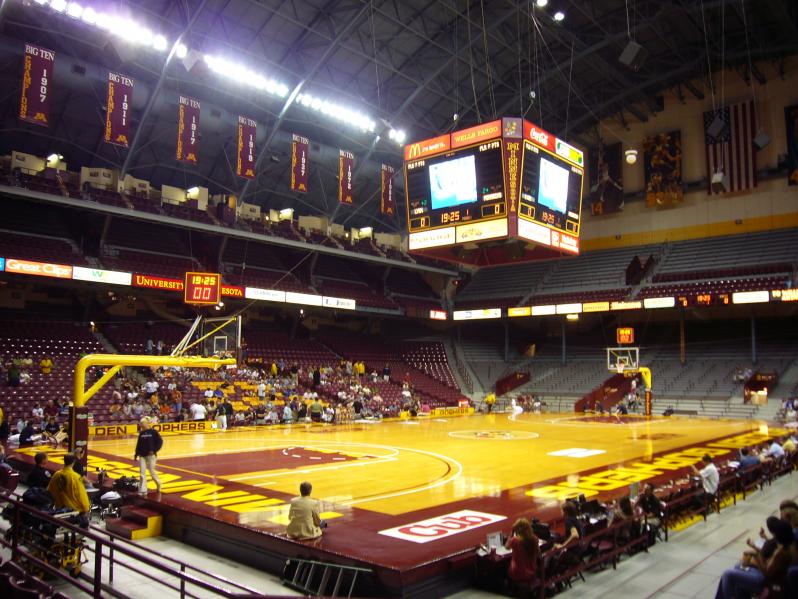 Opened in 1928 and referred to as “The Barn” due to the building’s exterior design — including an arched roof — Williams Arena serves as the home court for both the University of Minnesota men’s and women’s basketball teams.

The arena also boasts an unusual raised floor design with the court’s surface approximately two feet above the ground. The players’ benches and officials tables — as well as fans in the first row — are actually below the court.

The crocodile at Bursaspor’s Timsah Arena 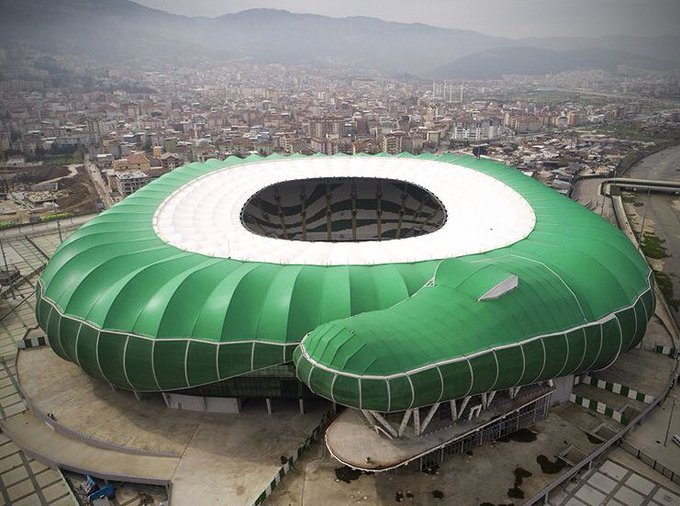 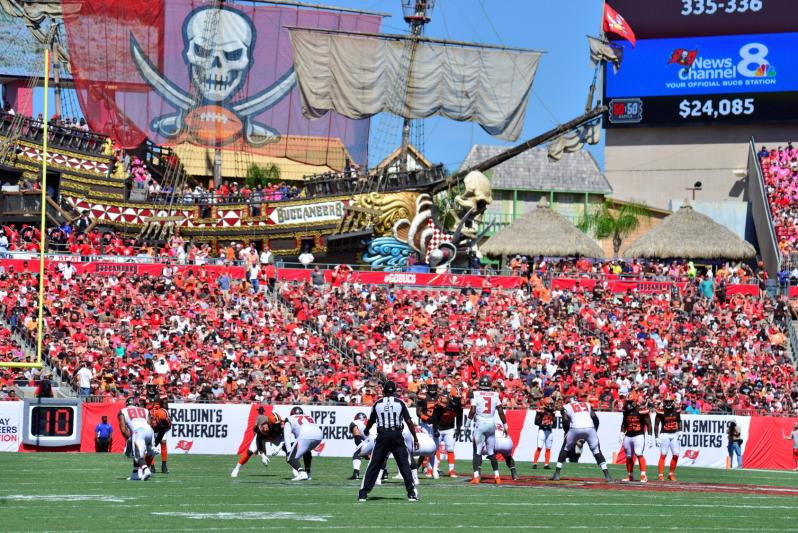 I’d like to go to a World Cup final. A Champions League final would also be awesome, or maybe a whole weekend at the Ryder Cup. But what I really want to do more than anything else is dress like a pirate and eat rum ham on the 103-foot, 43-ton, steel-and-concrete replica pirate ship at the Ray Jay.

When the song “Yo Ho (A Pirate’s Life for Me)” starts playing, you get to throw shit at the people below you. 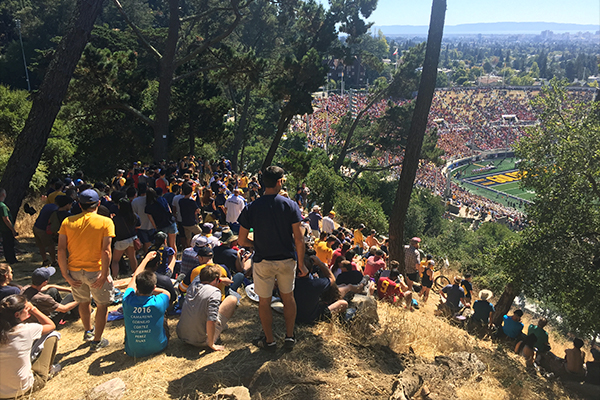 The construction of the University of California's Memorial Stadium in the 1920s left a large pile of excavated dirt behind. Since then, fans have been climbing the hill — which has grown a lot more natural looking over the years — to watch Cal football free of charge. 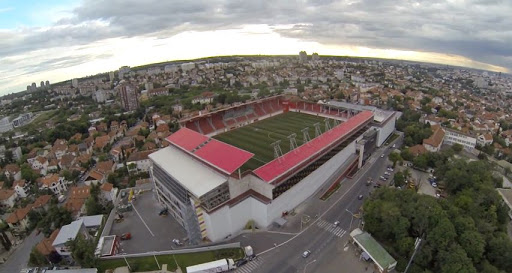 FK Voždovac is no small thing. The club was founded 108 years ago and plays in Serbia’s top division. Which makes it all the more strange that the club plays on the fourth floor of a shopping center.

Still, the stadium completely meets UEFA regulations and can welcome a hearty contingent of 5,174 fans.

The ivy at Chicago’s Wrigley Field 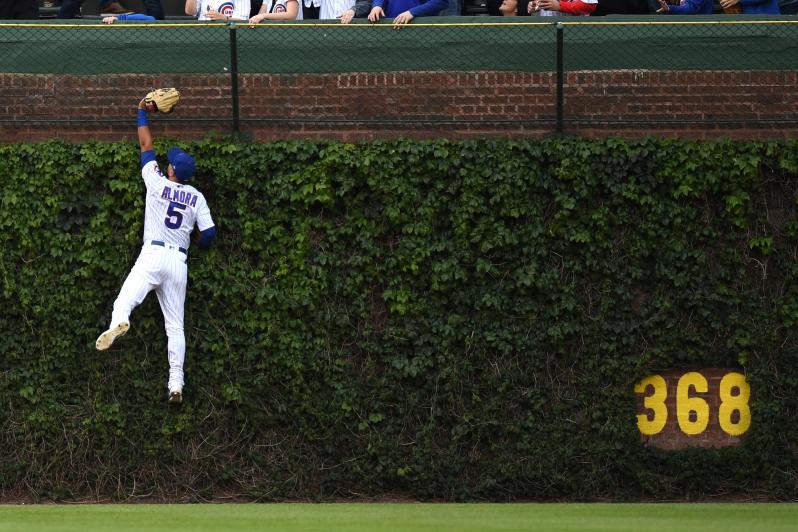 Chicago’s Wrigley Field is one of America’s most beloved and unassuming ballparks. The stadium is nestled indiscriminately in the middle of the Wrigleyville neighborhood, and that agrarian approach is manifested in the ivy that adorns the outfield walls.

The roof at Calgary’s Scotiabank Saddledome 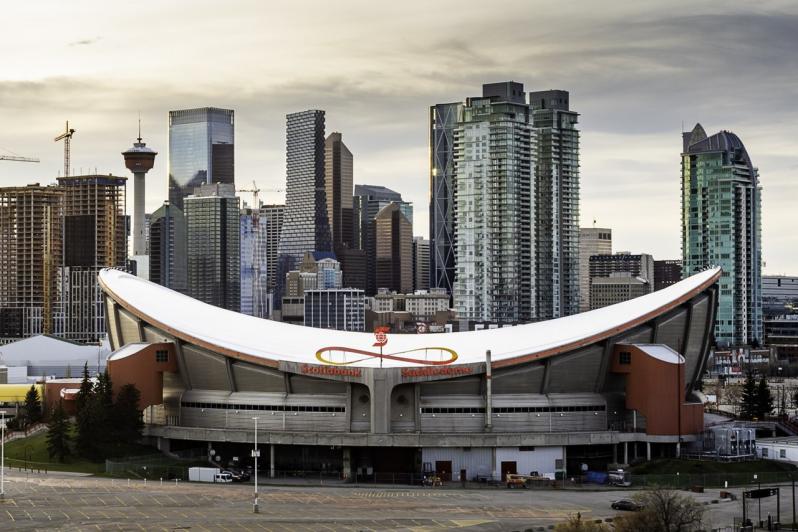 The home of the NHL’s Calgary Flames, the arena’s roof shape gave the stadium its “Saddledome” name. Ridiculously enough, the design reduces the interior volume by up to one-third.