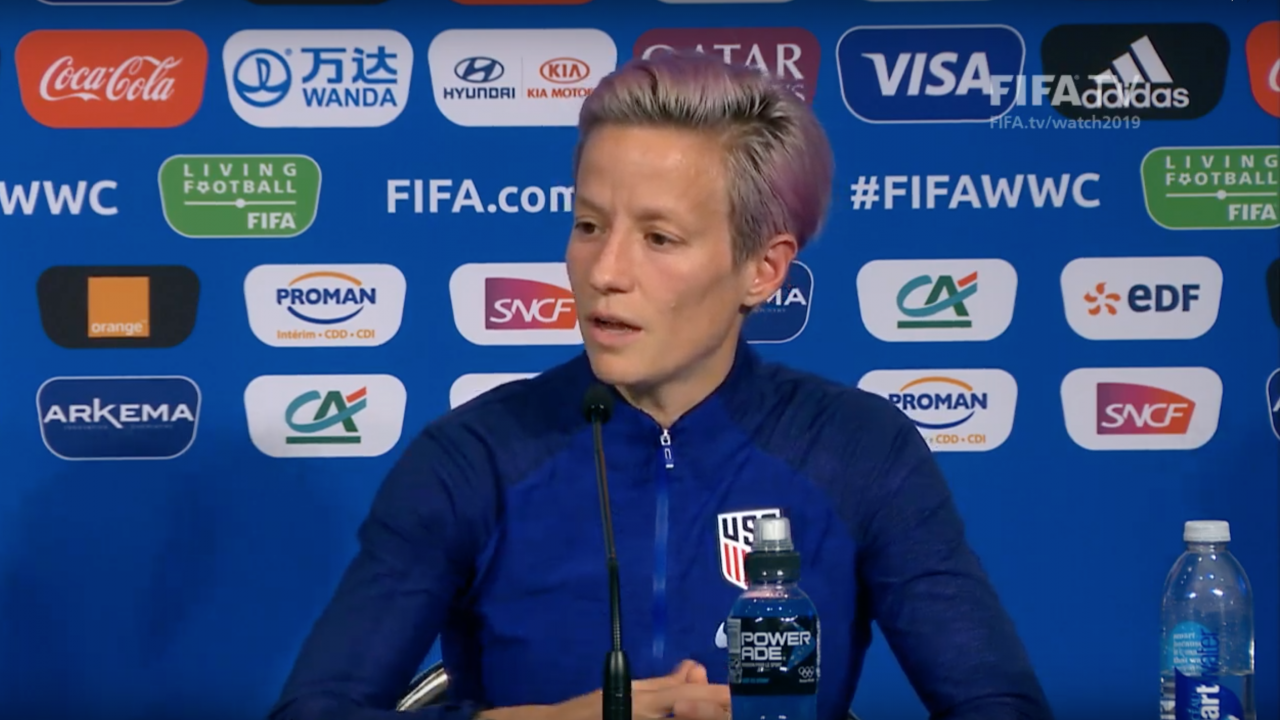 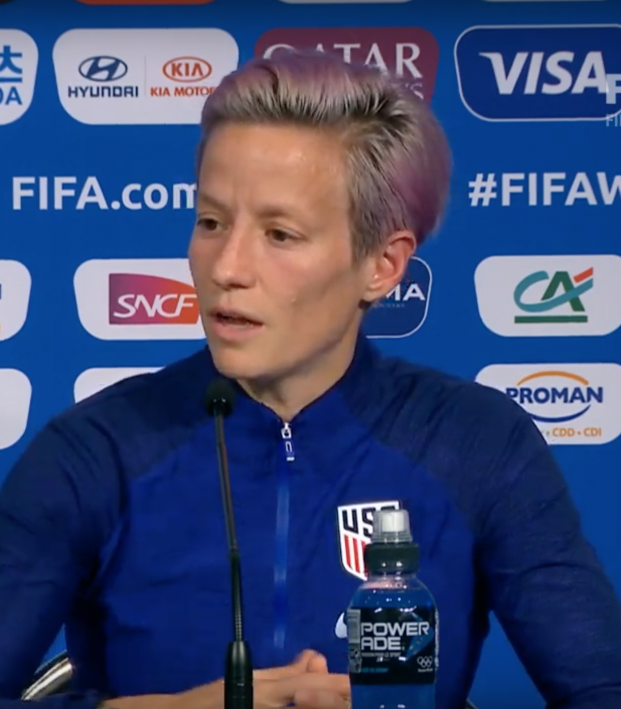 The U.S. women’s national team is a social force. Not political — social.

The USWNT is a symbol for gender equality and LGBTQ+ rights just as much as it is a symbol for sporting greatness. The team’s battle for equal pay, which has been going on for about 20 years now, isn’t just about getting the players and coaches more money. It’s a public face on the broader fight women face every day, especially women of color, who take home around 65 cents for every dollar a white man makes.

(Note: Politics is always a part of everything, everywhere, and anyone who thinks politics and sports can be kept separate is fooling him or herself, but this article is focusing on social issues that have nothing to do with politics, just as FIFA allows social messages but not political messages at World Cup matches.)

While all Americans are free — even encouraged — to disagree on political stances individual players make, the team itself is a social beacon, despite FOX’s best efforts to ignore the USWNT’s desire to bring about positive change for all Americans. The fight for social justice, led by captains Alex Morgan and Megan Rapinoe, is not an attack on anyone but a desire to encourage society to be better for all, an egalitarian if quixotic aim.

Rapinoe in particular is a lightning rod on this U.S. team. She’s spoken out against President Trump, protested during the national anthem and her status as an openly gay woman — by no means a rarity on the USWNT — is something many in this world have a hard time accepting. Some love her for it; some hate her for it — all are welcome to have their opinion.

Rapinoe also knows her platform can bring social good to the world beyond any Twitter war or her personal political preferences. She’s one of the leaders in the fight for equal pay — a fight, as we mentioned, that can have ramifications for all women in this country. So when asked about how the 2019 Women’s World Cup has been covered compared to previous tournaments, Rapinoe spoke up, as she always does.

Stephanie Yang of SB Nation posed the following question to Rapinoe at a pregame news conference on Thursday:

“Given that our backgrounds and our identities can inform how we view events, how we put things into context, particularly for huge events like the World Cup, when you look out at this press room at people who are going to be taking your words and telling your stories, do you start to see more faces of women, particularly women of color?”

Rapinoe’s answer was succinct and poignant, pointing to a need for more diversity, more perspectives and more opportunities for all.

“Of course, as much as we love all your men’s faces, the more women the better,” Rapinoe said. “Of course we want to get more women asking the questions to tell the stories from a different perspective, but also just giving people more opportunities I think overall will help tell a more complete story of the women’s game and of women’s sports.

“For us female athletes, I think it tells a more complete story when we have a more diverse group of people telling that story for us.”

(The full news conference can be found here.)

Like Tyrion Lannister, Rapinoe recognizes the power of a story being told by the right people. The 2019 Women’s World Cup is gaining unparalleled coverage, but it’s still coverage dominated by white men, as Rapinoe alluded to looking at a sea of mostly men’s faces.

Sports journalism absolutely needs more diversity. I can easily say that as a white man in sports journalism, there are far too many people like me in my profession. Having been in press boxes around the country big and small, having covered everything from six-man football to the NFL, middle school basketball to the Final Four, the prevalence of white men in this profession is astonishing and something that absolutely effects how sports are covered.

As Rapinoe said, with more perspectives on the Women’s World Cup other than that of the White Male (insert image of Sports Illustrated’s Grant Wahl here), a more complete story will be told and everyone will be better off for it. Nothing against those white men covering the sport, but the social issues the USWNT stands for would be amplified by a more diverse group of people telling that story.

As a straight, white male, I might struggle to explain why a given social issue — women’s rights or equal pay, for example — needs greater attention and remedy. Someone who has experienced these issues more deeply might better illuminate the matter, heightening the power of the USWNT as a force for good, making everyone’s lives, and society as a whole, better.

It is, unfortunately, a Sisyphean task to ask someone to fully understand what it’s like to be someone else. Try as I might, I can’t fully see all sides to all issues, whether it relates to gender, race or religion; I’ll always be susceptible to misconceptions, false assumptions or lack of foresight. It’s in the best interest of everyone to try to recognize all viewpoints, but it’s just not possible.

Sure, there will be some who cry wolf — there always are — but they are exceedingly rare. Should 911 operators stop taking calls on the off chance that someone is pulling a prank?

As Rapinoe points to in her answer, what can be done is introducing more diversity in every area. Companies should strive to hire people of all backgrounds (even The18.com could do better in this regard) and people should strive to experience different cultures.

Before the news conference opened up for questions, Rapinoe took the time to clarify her recent statements that went so viral the president of the United States felt compelled to respond. Rapinoe said in a video posted to Twitter by Eight By Eight magazine “I’m not going to the fucking White House.” She refused to back down from those comments, except for the profanity.

“I stand by the comments that I made about not wanting to go to the White House, with the exception of the expletive — my mom would be very upset about that,” Rapinoe said. “But I think obviously entering with a lot of passion considering how much time and effort and pride we take in the platform that we have and using it for good and for leaving the game in a better place and hopefully the world in a better place, I don’t think I would want to go and I would encourage my teammates to think hard about lending that platform or having that coopted by an administration that doesn’t feel the same way, doesn’t fight for the same things that we fight for.”

It should be noted that Rapinoe’s comments on Trump are political and not something we try to take a side on, unlike social issues for which Rapinoe and the USWNT stand. We don’t think Trump accidentally tweeting to the wrong Megan Rapinoe is political and absolutely think it’s something worth joking about, and if you think that’s unfair then feel free to make fun of us whenever we make a mistake — as long as it’s as funny as @meganrapino.

Rapinoe tried to stay out of politics for the rest of the news conference, even when pressed, preferring to focus on the match against France with one exception. She answered one question about whether the Trump situation destabilizes the team thusly:

“I’m not worried about destabilizing the dressing room,” Rapinoe said. “I think we have an incredibly strong dressing room, we’re very open with each other, obviously everyone knows who I am.”

“They’re elite people that live on a stage and they’re always under scrutiny, but I think this team has remarkable focus,” Ellis said. “I think we all support Megan, she knows that, we know we have each other’s backs in there. For our players, there’s only one purpose, one mission.

“It’s always something we can block out pretty easily. I’m not around them all the time so I don’t know what they’re posting or saying, but at the end of the day on the training ground, in the meeting rooms, focus has been phenomenal and we’re just genuinely excited.”

Rapinoe on the magnitude of the France game:
For me these are why you play all these friendlies a thousand times and are training on your own for hours and hours and grind through the rest of it to get to these hours.

Rapinoe on being outspoken and confident:
We come from a strong family that instilled those values in us. I think just naturally as a person I’m confident and sort of sure of myself in that way, have really amazing people around me in my family and teammates and the greater team and staff that supports me in that way and I feel very empowered and emboldened by that.
I think I’m also just very aware of our platform as a team and how much impact that it has, I think that gives us a lot of confidence. I guess if we were saying these things and no one listened to us, everyone hated us then maybe we wouldn’t say it as loud. Just seeing the impact we’ve had and seeing the way the sport has grown over the course of my career and just in general the way we’ve been able to effect change in society, I think it just can’t help but give confidence, so maybe emboldened that way and just me as a person, I’m carefree and confident and that’s the way it is. I like the big moments — those are the most fun for me. If you play a sport and if you want to be in this profession, it’s best to embrace the big moments because that’s where all the goods are. This is the best stage.

Jill Ellis on becoming the USWNT’s all-time leader in games coached on Friday:
I don’t pay attention to that; it’s one game at a time, literally. I couldn’t tell you one stat. For me it’s a tremendous honor to coach this group of players and to have this responsibility and I have a tremendous staff around me. It’s a good family vibe in terms of the environment. We want to keep winning.

Rapinoe on the unprecedented level of coverage and viewership for the Women’s World Cup:
I think we realize it. I think we’re, as much as we, we can never keep everything out nor do we try to keep everything out. Being the U.S. team, we always have a lot of eyes on us. We’re keenly aware of the amount of people here, fans here, interest in it, we’re interested in all those TV numbers and seeing how many people are watching and tuning it.
We felt like this was going to be the biggest World Cup we’ve had, I think every World Cup does that, especially in the women’s game seems to be growing exponentially every year and obviously you culminate it with a fantastic host country, easy for people to get to and the quality on the field has been there. I think we’re aware of it and excited about it. I think it’s really stepping back … it is really special to get to this third one and everything is continuing to get bigger and better and more supported. It’s encouraging for us.