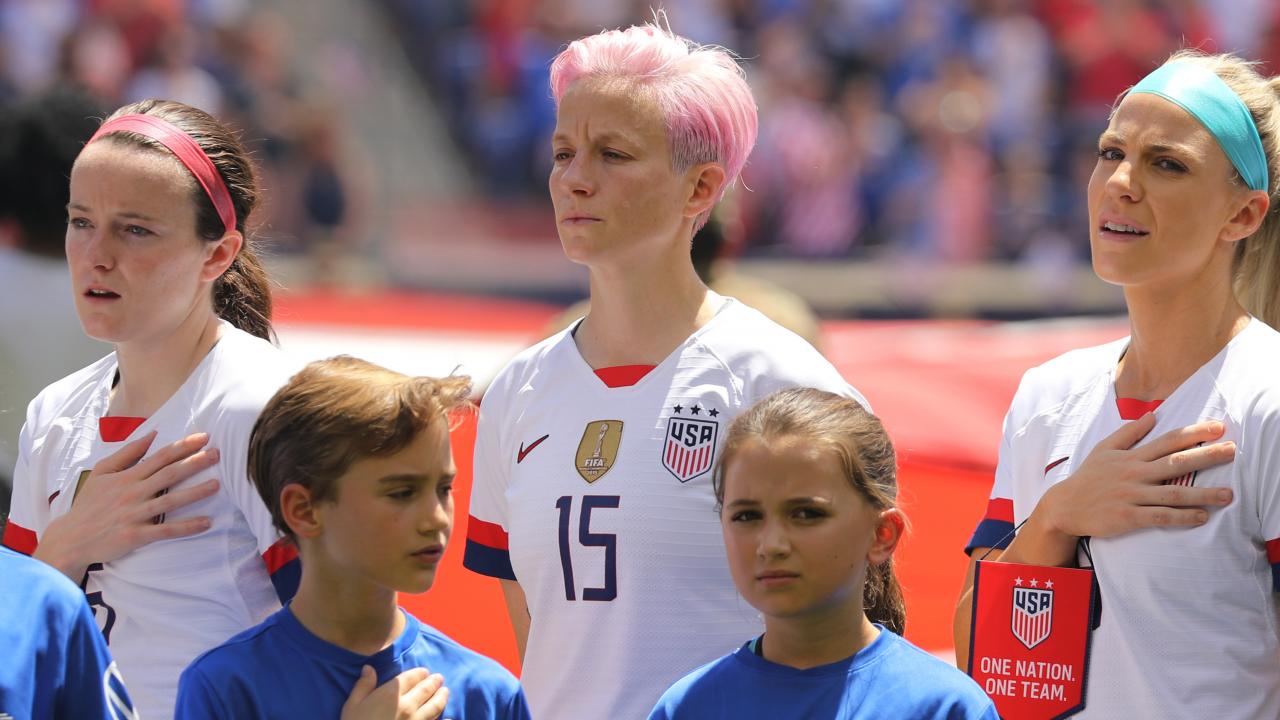 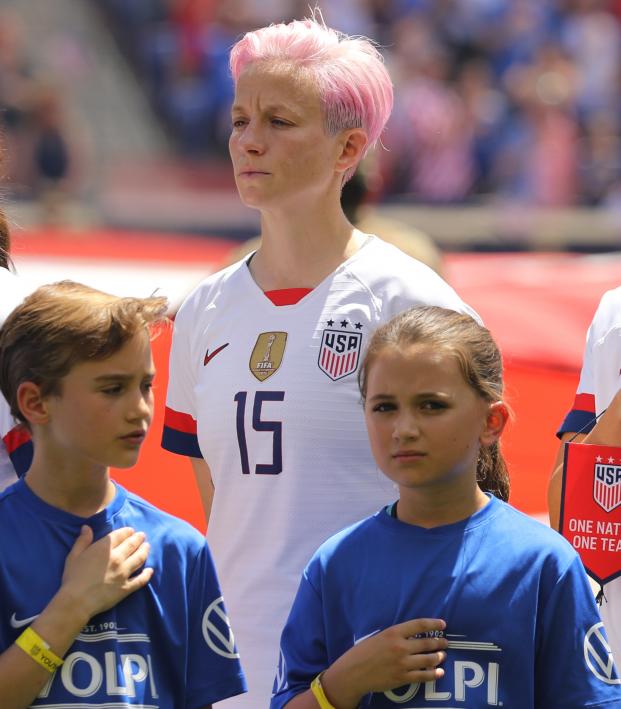 Megan Rapinoe is not one to shy away from speaking her mind. Now “awake,” according to a recent Yahoo! Sports interview, she’s using her platform to turn herself into, in her own words, “a walking protest.”

Before the Women’s World Cup opener against Thailand began on Tuesday, Rapinoe was the only American player to not put her hand over her heart and sing the national anthem.

Rapinoe recently spoke about why she chooses to protest the national anthem in an interview published by Yahoo! Sports in May. The feature delves into Rapinoe’s history as an outspoken activist, which really took off in 2016. She sees her role as a USWNT co-captain to speak for those who do not have a voice, to defy the status quo that mistreats women, people of color and the LGBTQ community and spark a conversation to make the United States a better place for all.

Having previously knelt for the anthem, she said sees her protests as a way to speak out against things the United States does that she sees as wrong.

“I feel like it’s kind of defiance in and of itself to just be who I am and wear the jersey, and represent it,” Rapinoe told Yahoo! Sports. “Because I’m as talented as I am, I get to be here, you don’t get to tell me if I can be here or not. So it’s kind of a good ‘F you' to any sort of inequality or bad sentiments that the (Trump) administration might have towards people who don’t look exactly like him. Which, God help us if we all looked like him. Scary. Really scary. Ahh, disturbing.”

Rapinoe followed Colin Kaepernick in taking a knee during the national anthem in 2016, becoming the first white and first female athlete to do so. It was around this time she found her “awakening” as an activist.

“Colin Kaepernick very much inspired me, and inspired an entire nation, and still does, to actually think about these things,” Rapinoe said in the interview. “The way he spoke about them so clearly, so matter-of-fact, wasn’t trying to convince anyone. Just, ‘This is what is happening, this is what I’m willing to do about it.’ I found that extremely inspiring and convicting. Like, how can you not support?

“I haven’t experienced police brutality, or racism, in that way. But knowing that it obviously happens, and knowing that it’s a very real thing, and that there’s something I can do to lend to that movement, or lend to those voices, or to support them, that’s important. You don’t have to understand everything fully in a personal way. That’s impossible. But that doesn’t mean it’s not the right thing. It doesn’t mean that you can’t believe what people are saying.”

Rapinoe received backlash for taking a knee and not long after U.S. Soccer mandated all players stand for the national anthem. Rapinoe obliged, adding a new wrinkle to her protest by not participating in singing the Star-Spangled Banner or putting her hand over her chest. 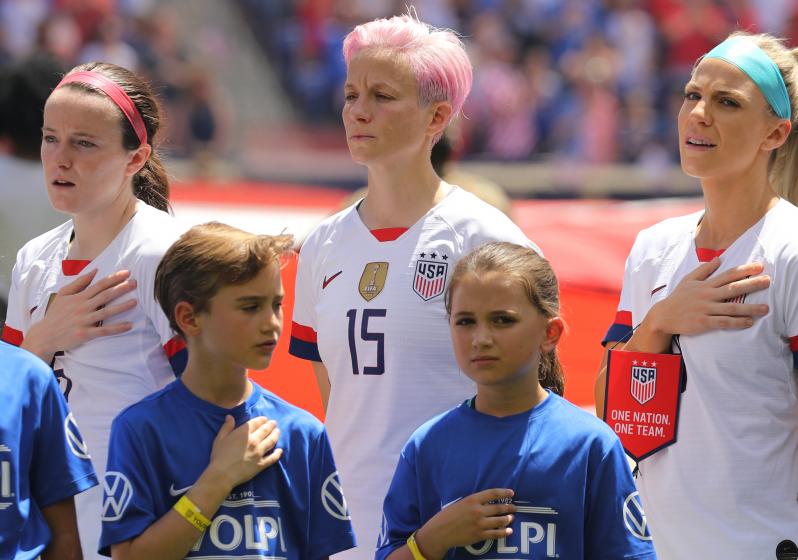 Megan Rapinoe has traded in kneeling for the anthem for standing silently. Photo: Shutterstock.com

Rapinoe wasn’t happy with U.S. Soccer’s response to her kneeling.

“Using this blanketed patriotism as a defense against what the protest actually is was pretty cowardly. I think the NFL does it. I felt like the statement from U.S. Soccer, and then the rule they made without ever talking to me, that was the same as what the NFL was doing — just to not have the conversation, to try to just stop me from doing what I’m doing instead of at least having a conversation, and trying to figure out a (solution) that makes sense for everyone.

In the Yahoo! Sports article, Rapinoe is quoted as calling the president “sexist,” “misogynistic,” “small-minded,” “racist” and “not a good person.” She said the Trump administration doesn’t “value all Americans equally” and that the country is plagued by “atrocities ... extreme poverty … homelessness ... mass incarceration ... discrimination against people of color, and police brutality.”

Other notable quotes from the Yahoo! Sports interview include:

On backlash from kneeling:
“It wasn’t easy for me, but it shouldn’t be. Whenever you’re trying to be an ally, and it’s super easy and comfortable for you, you’re not an ally. ... I think that was a really good lesson for me: This is what it’s going to take for things to change, norms to change, conventions to change, to try to break down white supremacy and break down racial bias. It’s going to take it being hard. For everyone. … That really resonated with me.”

About coming out and helping others do the same:
“When you’re out, it’s only one part of who you are. But when you’re not out, it’s just this all-consuming thing. The deeper in the closet you are, the more you lie, the more it becomes this all-consuming thing that it really doesn’t have to be, and it takes over your life. So people getting to a point where they can just live their lives and be happy, if I can have any part in that, that’s pretty special.”

On whether she would rather talk about soccer instead of politics:
“Probably, yeah. I mean … I very much am a soccer junkie and enjoy talking about soccer as well. But there are things that are much more important than soccer.”

Rapinoe and the USWNT next face Chile on Sunday before finishing out Group F play against Sweden on Thursday.

For more on all things Women’s World Cup, keep this page bookmarked.