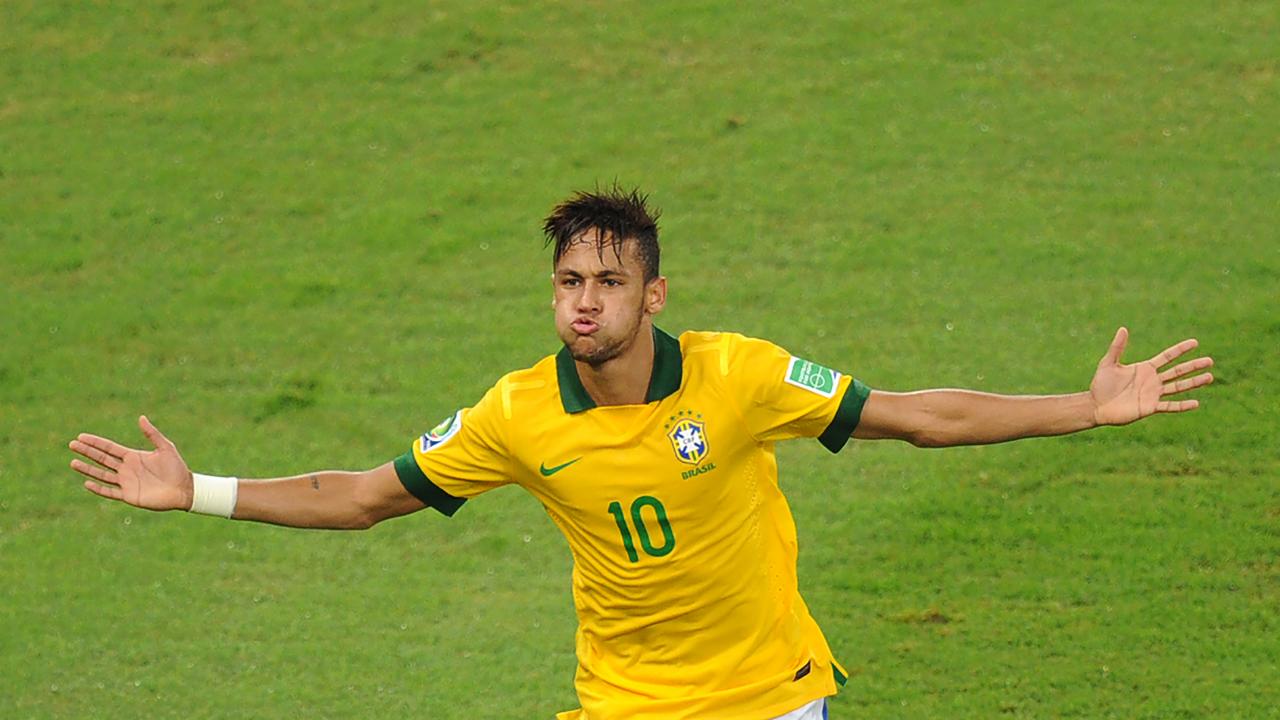 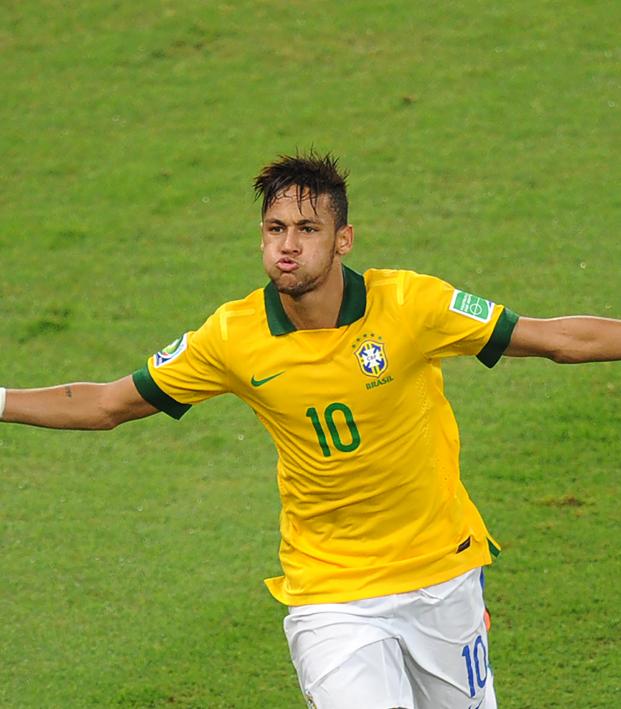 Where Does Neymar Rank Among Brazilian Greats?

Brazil's five World Cup titles are most all time, and it's no coincidence that it has produced some of the best soccer players to ever play 'jogo bonito,' the beautiful game. Pele is a consensus No. 1 on the list of the greatest Brazlian players, but where do Ronaldinho, Ronaldo and 26-year-old Neymar rank?

Our list of the 18 greatest Brazilian players of all time doesn't include all Brazil players with 100 caps or simply the Brazil players with the most goals. Rather, we considered each player's peak performance both professionally and at the World Cup, as well as the lasting impact they have had on the game. 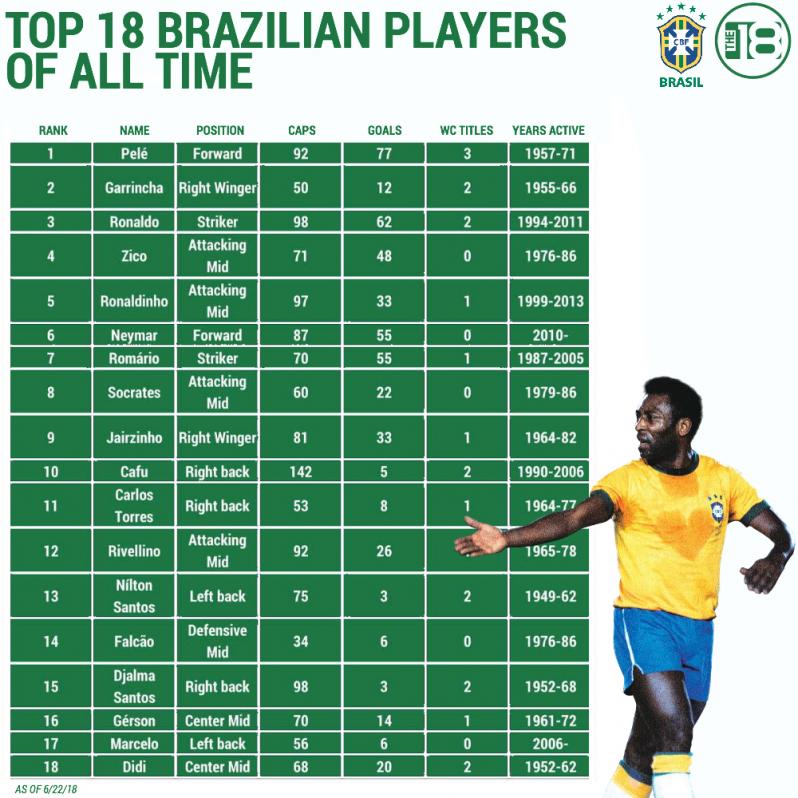 Pele is widely considered the greatest player of all time, although legendary Hungarian striker Ferenc Puskas thought differently: "The greatest player in history was (Alfredo) Di Stefano. I refuse to classify Pele as a player. He was above it."

When he did play, Pele's versatility set him apart from other great players who have a special skill. He could finish with both feet, create from deep positions, attack one on one and win aerial battles.

Before spending his last three seasons with the New York Cosmos of the NASL, Pele scored 619 goals in 638 professional games with Santos of his home city, Sao Paolo.

Pele is the only player to have won three World Cup titles.

Brazil's national team was undefeated when Pele and Garrincha played together. Garrincha's dribbling skills earned him the nickname "Alegria do Povo," or "Joy of the People."

After Pele left the second game of the 1962 World Cup with an injury that would keep him out of the rest of the tournament, Garrincha led Brazil to its second consecutive title as the Golden Ball winner.

Garrincha spent the vast majority of his career playing as a winger for Rio de Janeiro club Botafogo, where he won three Campeonata Carioca titles.

Ronaldo is second to Pele on the list of Brazil players with the most goals. He scored 62 times in 98 appearances with the Seleção, including eight during the 2002 World Cup to win the Golden Boot. Ronaldo was also a member of Brazil's 1994 World Cup-winning team as a 17-year-old.

Although he never saw the pitch during that tournament, Ronaldo garnered interest from Europe immediately after, and he spent the next two seasons with PSV in Eredivisie before moving to Barcelona.

Prior to sustaining a serious knee injury during a match playing for Inter Milan in 1999, Ronaldo was at the height of his powers as the consummate striker. His physicality, speed, ball control and finishing abilities enabled him to score goals that no other player in the history of the game could have dreamed up.

Next on the list of the greatest Brazilian players is the highest-ranked player who didn't win a World Cup. Brazil's 1982 team is often recognized as one of the most talented teams of all time, but it was knocked out by Italian striker Paolo Rossi's hat trick in the second group stage.

Despite falling short at the World Cup, Zico had a highly successful professional career with Rio de Janeiro club Flamengo, where he won four Campeonato Brasileiro titles and the 1981 Copa Libertadores.

Zico's creative playmaking, free kick prowess and technical ability led Pele to consider him as the Brazilian player who most closely resembled his playing style.

The 2005 Ballon d'Or winner Ronaldinho could seemingly do anything with the ball at his feet. His one-on-one skills were unparalleled during his early playing career, and he was equally adept at setting up his teammates.

Ronaldinho's career accomplishments include winning the 2002 World Cup and 2006 Champions League with Barcelona.

Neymar has the talent to move up next to Pele on this list, but he first needs to lead Brazil to its sixth World Cup title. There's no denying that he has the heart and determination to get Brazil across the finish line.

At just 26, his accomplishments at the club level already make him one of the all-time greats. He led Barcelona to the treble in 2014-15 alongside Lionel Messi and Luis Suarez, and he's the only player in history to score in the Copa Libertadores final (2011) and Champions League final (2015) in winning efforts.

Neymar's dribbling skill, speed and vision make it so repeatedly fouling him is the only way to slow him down.

One of the few players to ever reach the 1,000 goal milestone as a professional (although some say he fell just short), Romario was a lethal finisher in and around the penalty box.

He led Brazil to its 1994 World Cup triumph and earned the Golden Ball as a result. Romario spent the prime of his career with PSV and Barcelona. He scored nearly a goal a match with the Dutch club, netting 165 in 167 appearances.

"Dr. Socrates" is unique among the greatest Brazilian players in that he earned a bachelors degree in medicine while playing as a professional.

Socrates captained Brazil's uber-talented 1982 World Cup team, and he was known for both his playmaking and physicality.

Socrates spent all but one season playing in Brazil, the vast majority of which was split between Botafogo and Corinthians.

Garrincha's successor on the right wing for both club and country, Jairzinho played his first 15 seasons with Botafogo and won the 1970 World Cup with Brazil.

Jairzinho made history by scoring in all six games that Brazil played en route to its third title in 12 years. His 33 goals for the national team are tied with Ronaldinho for eighth on the list of Brazil players with the most goals.

Cafu won the 1994 and 2002 World Cups with Brazil, and he is the only player to have appeared in three consecutive World Cup finals.

He's the highest-ranked defender on the list of the greatest Brazilian players, although he was gifted enough as an attacker to occasionally play right wing.

Cafu's 142 caps with the national team make him the most-capped player ever for Brazil.

Another right back on the list, Torres scored what many consider to be one of the greatest goals in history to cap Brazil's 1970 World Cup final win against Italy.

Torres spent the majority of his professional career with Santos, where he played alongside Pele and won both the state and national league titles in 1968.

Rivellino played on the left side of the midfield for Brazil during the 1970 World Cup, during which he scored three goals to lead his team to the title.

He spent most of his professional career with Corinthians, but had to wait until later in his career to win two state titles with Fluminense.

Santos is credited with being one of the first outside backs to also be proficient going forward. It's easy to imagine him playing in a similar fashion to Marcelo, the other left back on this list.

Although Falcao had just 34 caps with Brazil's national team, his peak form during the 1982 World Cup earns him a place on the list of greatest Brazilian players. He teamed up with Zico and Socrates to form one of the best midfields in international soccer history.

At the club level Falcao won three Campeonato Brasileiro titles with Internacional and led Roma to its second Serie A title during the 1982-83 season.

Often confused as being related to Nilton Santos, Djalma teamed up with his namesake on the opposite side of Brazil's backline during its 1958 and 1962 World Cup title runs.

Santos is tied with Ronaldo as the seventh-most capped player in Brazil history, having made 98 apperances with the senior team. His professional career spanned 22 seasons; between the national team and his clubs, he played in more than 1,000 games.

Gerson was the midfield maestro for Brazil's 1970 World Cup-winning team. Despite often playing in a deep-lying role, he scored more 207 goals between club and country.

Along with Neymar, Marcelo is the only other active player to crack the top 18 list of the greatest Brazilian players. Marcelo complements elite defensive positioning with impeccable ball control skills.

His ability to fly down the left side of the pitch and contribute to the attack has been instrumental to Real Madrid's sustained Champions League success.

Before Gerson marshaled Brazil's midfield in 1970, Didi was its engine during the 1958 and 1962 World Cup title runs.

In 68 appearances with the national team, Didi scored 20 goals. He saved his best performances for the biggest stage, earning the World Cup Golden Ball award in 1958.