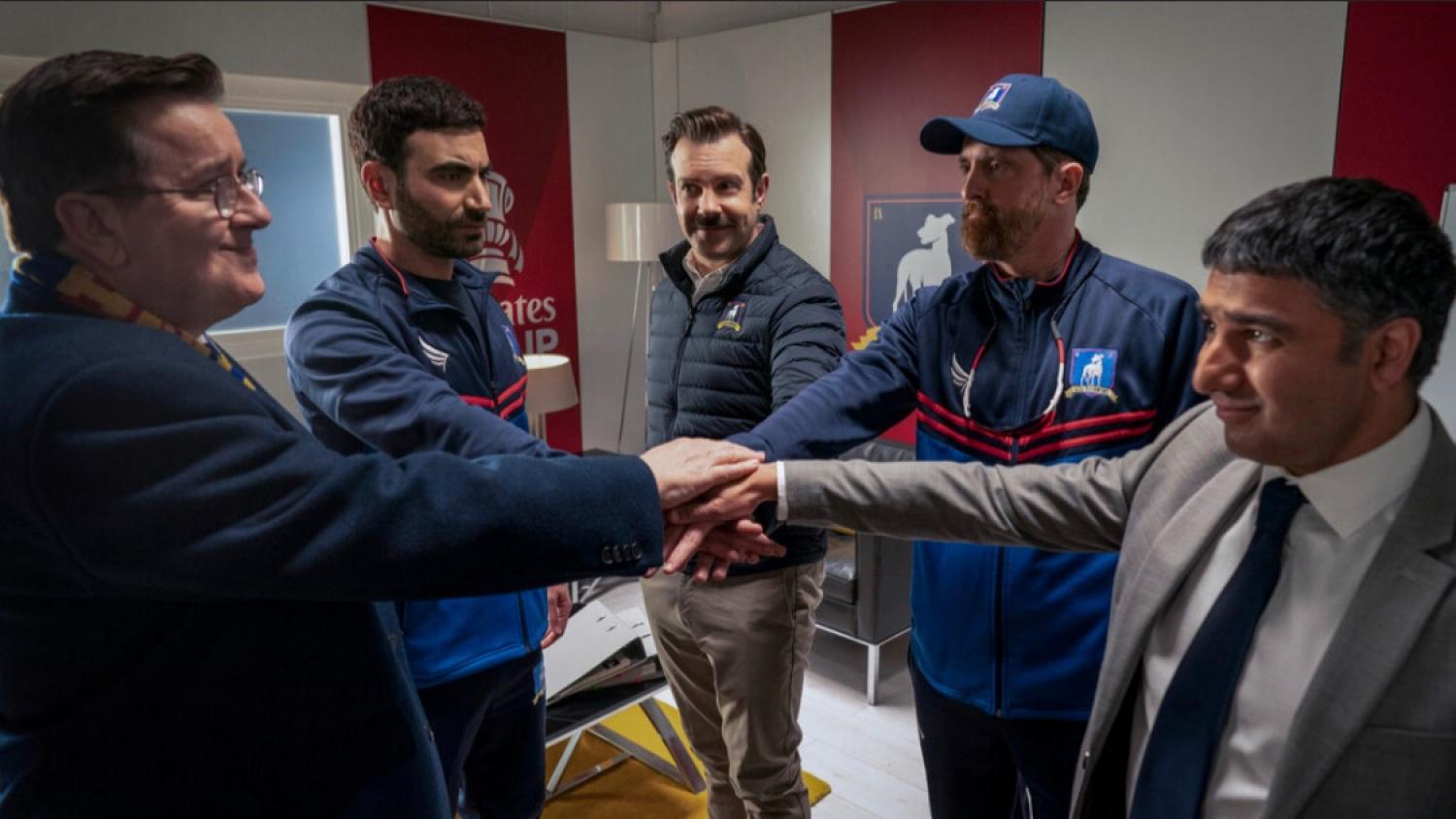 Halloween is the one time of year when it’s OK to dress up as sexy versions of random figures from pop culture and beg for candy and/or get completely wasted. But for those of you soccer fans who are a bit unsure of what to go as this year, we’ve got some Ted Lasso Halloween costume ideas just for you.

Spoiler Warning: We’re going to assume that if you want Ted Lasso Halloween costume ideas you’ve already watched all of the series through Season 2, but if not, be warned there will be spoilers ahead.

This one’s pretty self-explanatory and perhaps one of the easiest to pull off. All you need is to grow a spectacular mustache (or use a fake one), wear a blue tracksuit and practice your Kansas accent and adorable aphorisms. Bonus points for a white visor, rounded shades or an actual AFC Richmond shirt. Another option if you don’t have a tracksuit is to wear khakis and some sort of polo/sweater combo.

To be honest, this one might be the toughest to pull off because actress Hannah Waddingham has such presence while playing Rebecca. But the costume is pretty simple: Dress up like a boss-ass bitch and carry around a small, pink box of cookies. Blonde hair is a must to really complete the look, but otherwise just dress fancy like she do — whether it’s a power suit or a dress — and you’ve got it; maybe wear some tall heels if you’re short. Everything else is in the mannerisms, from her perfect posture to that wide and vibrant smile.

Coach Beard has a simple, lazy look that is perfect for anyone seeking a last-minute Halloween costume idea. Grab some sunglasses, a baseball cap and grow out a beard (or get a fake one) and you’re set.

For clothing, you can go a couple of different routes. The easiest is a blue tracksuit. But if you want to go dive through some thrift shops, you could go for his “Beard After Hours” look that can only possibly be found at second-hand stores.

A Sharon costume might be a bit more niche and harder to be recognized, but she’s is such a great character we have to include her.

The best way to be recognized as Sharon is to wear a white bike helmet and a windbreaker, with a yellow lanyard around the neck and long earrings. A foldable (or any) bike would add to the costume, though that might not be doable.

A reminder: blackface is not OK.

For the fans of the written word, Trent makes for a great costume. The kinda sexy writer has a beautiful head of black hair with gray streaks that is a must for any Trent costume. Beyond that, you’ll want a professorial blazer and a red lanyard. Bonus points for glasses, either on the face or in the front blazer pocket.

We’re just going to include all Richmond players in one category since they are all pretty similar. For this, you’ll need to either buy or create your own Richmond uniform. If you’ve already got some Crystal Palace gear, you’re basically halfway there.

The key to dressing up as a Richmond footballer is to pick something about that player’s personality to carry with you. If it’s Dani Rojas, maybe bring your pet Greyhound around and call him Earl. If it’s Jamie Tartt, you’ve gotta go heavy on the hair product and his inimitable eye expressions.

The easiest way is to just put the name of the player you’re dressing up as on the back of an AFC Richmond jersey. Personally, I’d love a Sam Obisanya jersey, but again: no blackface y’all.

I admit it, Roy Kent is so scary in person, he made my glasses steam up. He’s not a fan of fish pie either

The real-life broadcaster who calls games for Richmond in “Ted Lasso” has one of the most recognizable voices in American soccer. While his look isn’t super easy to have come across as a costume, it’s easy to replicate: thick-rimmed glasses and a suit with a sweater under the coat.

One warning: If you so much as mutter the name “Arlo White” on Twitter, he will come after you, speaking from personal experience.

lmao arlo name searching to argue with everyone mad at him for parroting the pl and ksa's bullshit pic.twitter.com/CZItTMBoeu

Anyone who’s finished Season 2 will probably want to steer clear of this costume, but Nate’s story arc is so mesmerizing we can’t not include him.

We highly recommend you go as end-of-Season-2 Nate instead of early-Season-1 Nate (which is basically just Beard’s costume but without the beard or hat). To do this, you’ll need to emphasize the salt and pepper hair and wear a dark suit (or just as evil: a West Ham outfit). Shaving is a must, lest you be confused with Roy Kent, which brings us to our best Ted Lasso Halloween costumes for couples.

The most beloved couple in all of “Ted Lasso,” I suspect we’ll see a lot of Reeley (or is it Koy?) costumes this year.

For Roy: black. Just all black. Also, a beard and great hair, but those are also black. I don’t care if he calls it heathered charcoal, it’s black.

For Keeley: youthful outfits and big hair. Keeley is one of the few characters (along with Rebecca) who has a big repertoire of outfits, so you have a lot of options, from leopard-print dresses to perky power suits. Along with big hoop earrings, you’ll want a giant ponytail to really stand out as a recognizable Keeley.

One of the loveliest couples in the show was the short tryst between Rebecca and Sam.

We already covered Rebecca above and for Sam you could just go with a Richmond player outfit, but I don’t think that’s the best way to go. If you’re doing Rebecca and Sam, both costumes should replicate their first date, when Sam was looking suave as hell with a blazer over a turtleneck and Rebecca wore a stunning pink dress. Once again, no blackface.

In my opinion, Ted’s relationship with Coach Beard is the best, most underrated relationship in all of “Ted Lasso.” The two are always there for each other, in a way that shouldn’t be underestimated. It’s not a sexual relationship like the first two on this list, but who said all Halloween costumes have to be about sex?

Regardless of the genders of the couple, this makes a great Ted Lasso Halloween couples costume because they’re just such a great pair.

Another option here is to go for Ted and Flo, but that one might need some explaining because Sassy doesn’t so much have a particular style as she has particular mannerisms. 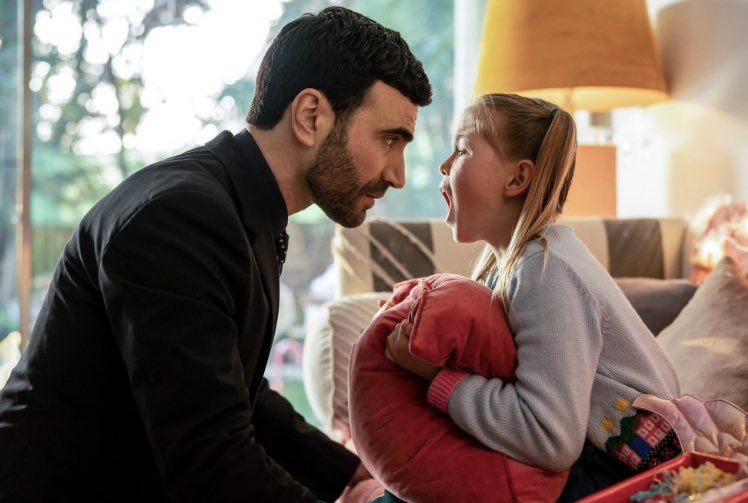 If you’re a parental figure or guardian looking for a good duo costume you’ve got two options from “Ted Lasso.” The first is Rebecca and her goddaughter Nora; the more fun one is Roy and his niece Phoebe.

Roy, again, is easy: just wear black and carry around a copy of the book “A Wrinkle In Time.” For Phoebe, wear lots of pink, put your hair back in a double ponytail and use the word “fuck” as often as your Roy will allow you.

Anyone else attracted to Rupert Mannion on Ted Lasso? pic.twitter.com/hoS5nzQrFP

For those couples who want to show up to a party and have people immediately hate you, may I suggest dressing up as Rupert and Bex?

I think the quintessential Rupert is his white tux with a black bowtie from his appearance at the annual charity ball. But really, any overpriced suit will do, to go with a slightly balding head of gray hair.

For Bex, you’ll need an understated but form-fitting dress and a demeanor that says “everyone knows I’m dating Rupert for his money and I don’t care.”

After seeing this week’s fantastic episode, how have Baz, Jeremy, and Paul not gotten their own spin off show yet?!! #TedLasso pic.twitter.com/iQpiB6ucC4

These costumes are all pretty easy: just dress as fans of Richmond, whether it’s a hat, jersey or scarf. Mix and match to your desire. One can have wavy hair, another awful bangs and the third a hat. As always: no blackface for Paul.

If you’ve got four people, feel free to add After Hours Beard or Mae, the badass barkeep at the Crown & Anchor.

Leslie and Julie Higgins Plus As Many Kids As You Want

We couldn’t go an entire “Ted Lasso” article without mentioning the beloved Higgins. With a wife, five sons and a now-dead 20-year-old cat, you can make this costume fit up to eight people, giving you plenty of leeway.

For Leslie, a boring, brown suit, round glasses and a constant smile are all you need. For Julie, you can go for a big coat and medium-length hair.

For the boys, we don’t get to see too much of them so just get a bunch of Richmond jerseys and Christmas hats to reenact this Christmas card. Plus, the oldest gets to be a priest, but the cool kind, if those actually exist.

Feast your on what I just got in the mail today. Now, that is one fine looking family. Thanks for the card, Higgins! pic.twitter.com/uqZBiBqw6e

Fun fact No. 2: The actors who play Leslie and Julie Higgins, Jeremy Swift and Mary Roscoe, are married in real life, too.

If you’re in a throuple or love triangle and want to make things extra spicy, add Jamie Tartt to the mix. We’ve already covered Roy and Keeley, but for Jamie make sure to wear something that reveals at least one nipple and some abs.

A lot of “Ted Lasso” fans wonder if Rebecca and Ted will end up together because they’re such great friends. But so far the only person Ted has hooked up with on the show is Flo, Rebecca’s best friend.

That makes this throuple costume extra fun, with tension between all three characters and no one knowing who will end up in bed with who at the end of the night.

At this point, we’re really just throwing aforementioned costumes together in different combinations. But having Roy, Keeley and Phoebe out trick or treating would be a fun way for parents to dress up with their child.

Look, anyone can just copy something they see on TV and make a costume out of it. The best Halloween costumes are those that go above and beyond and add something extra to the costume, like Sherlochness Monster Holmes (stolen shamelessly from “Bob’s Burgers”) or, in this case, Ted Lasso of Truth, as seen below.

Our best advice is to get creative and do something slightly different than just dressing up as your favorite character. Combine characters (what if Roy and Jamie were one person?), add to characters (Coach Bearded Dragon?) or just make shit up (Ted Lasso as coach of Manchester United, which to be honest might be an upgrade). Some more fun ideas: Combine Dani Rojas from “Ted Lasso” with Dani Rojas from “Far Cry 6,” Hannah Waddingham’s Rebecca Welton with the shame nun she played in “Game of Thrones” or however many combinations of Ted Lasso we can come up with: Dead Lasso, Led Tasso, Bed Lasso, Fed Lasso, Sad Lasso or Ned Lasso (he’s basically already Ned Flanders with less religion).

The important thing is to have fun with it. And don’t be basic, if you can help it.

We hope these Ted Lasso Halloween costume ideas help you find the best possible outfit this year. If you use one of these, tag us on Instagram @the18soccer with photos and we’ll repost them.