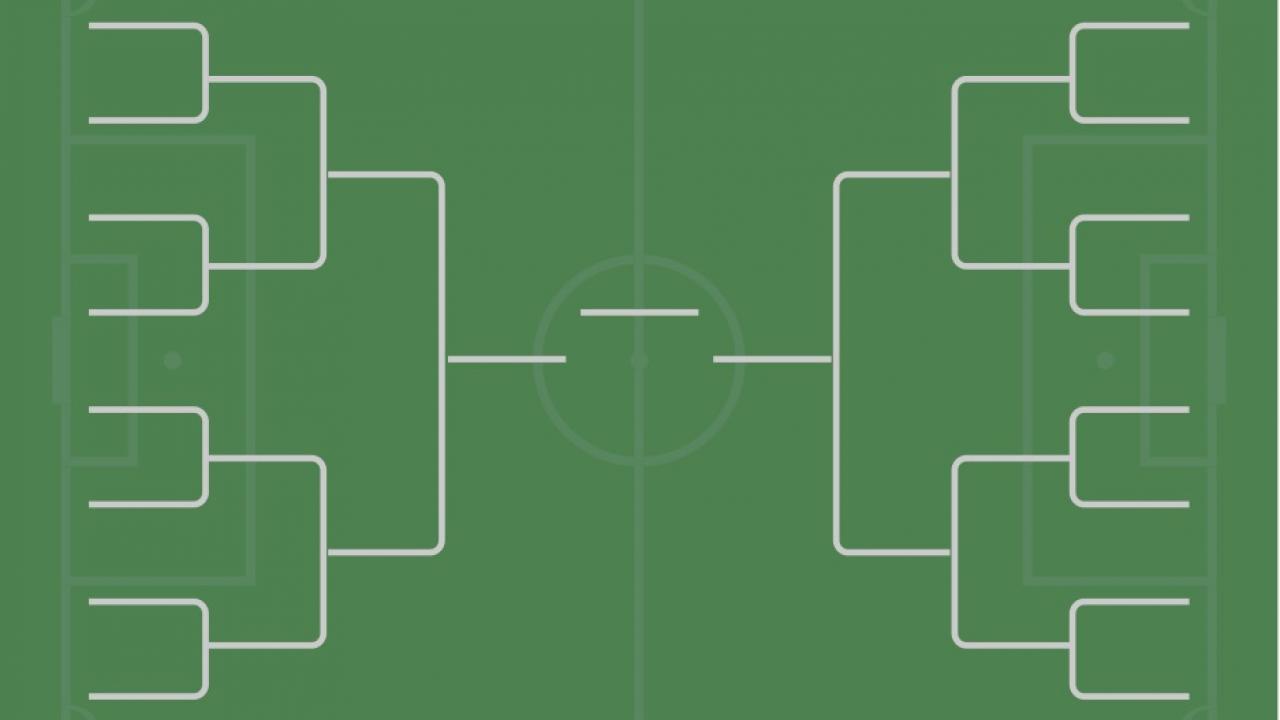 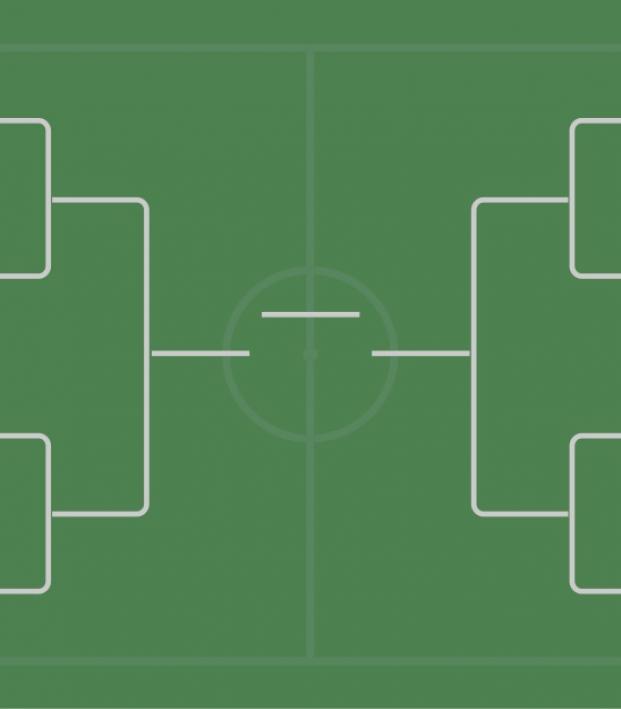 Everyone knows the World Cup really gets going once the group stage ends and the knockout rounds begin. While plucky underdogs can get to the Round of 16 and maybe even the quarterfinals, the World Cup bracket is where the big boys make names for themselves.

The 2018 World Cup bracket was set well in advance of the tournament this summer and follows a familiar format, with 16 teams going head-to-head in single-elimination competition until one team remains standing on July 15.

World Cup bracket play in 2018 will start on June 30, pitting group winners against group runners-up. The exact matchups will be determined during group play and you can find the full World Cup bracket schedule at the bottom of this page. But first, here are 10 cool things you didn’t know about the World Cup bracket.

1. The World Cup Bracket Was The Entire Tournament Twice

Today we just assume the World Cup will always start with group play before giving way to a knockout round, but this wasn’t always the case. While the inaugural World Cup in 1930 had a group stage, the 1934 World Cup immediately began with bracket play, as did the following tournament in 1938.

Teams complained about traveling halfway around the world just to lose a single match and be forced back on a boat to head home (this was in the days before modern commercial flights). Thus, a group stage became the de facto start to a World Cup following the tournament’s hiatus for World War II.

2. Not Every World Cup Featured A World Cup Bracket

When FIFA switched the World Cup back to a group-stage format, the organizers didn’t revert to the original system, where a group stage was followed by a knockout stage. Instead, in 1950 the tournament featured an initial group stage and a “final round” group stage, with the winner of the second group stage being declared the world champion.

Fortunately for fans who like things to be black and white, Brazil and Uruguay were the top two teams in the group and faced off in the final group-stage match, so there was a de facto final. Uruguay rallied to win 2-1 to shock the nearly 200,000 fans in attendance at the Maracana in Rio de Janeiro.

It should be noted, part of the reason for the return to a group stage was for increased ticket revenue, with the number of matches played nearly doubling.

3. The World Cup Bracket Stage Wasn’t Always The Only Stage In Which Extra Time Was Used

The knockout rounds of the World Cup are the only time matches go into extra time when tied after regulation — with one exception. In 1954, extra time was used during the group stage. This was in part due to the fact the teams played only two group-stage matches despite being in four-team groups. Draws were still awarded if the match was tied after 120 minutes.

Once again, the 1954 World Cup was an oddity in terms of its format. While in other editions the World Cup bracket divided group winners and group runners-up when possible, the 1954 bracket did the opposite. After the four groups produced eight teams for the knockout rounds, the bracket was set up so that the four group winners would produce one finalist and the four runners-up would produce the other finalist.

This resulted in West Germany facing Hungary in the final despite the latter crushing the former 8-3 in the group stage. Nonetheless, the West Germans won 3-2 in what is now known as the Miracle of Bern.

5. Ties In World Cup Bracket Matches Used To Be Broken With The Drawing Of Lots Or Replays

Nowadays, fans start dreading penalty kicks as soon as a match reaches the 80th minute if the score is tied, despite the possibility of 30 minutes of extra time. But this wasn’t always the case.

In 1962 and 1966, World Cup bracket matches would have been decided by a drawing of lots if the teams were tied after extra time. Fortunately (or perhaps for that reason), none of the knockout matches those years finished even after 120 minutes. Similarly, in 1970, a coin toss would have been used to determine the winner after extra time, but this wasn’t necessary either.

In 1934 and 1938, replays were utilized to determine winners, meaning the nations met again at a later date to play the match again. This would be a cool idea to bring back, though the added stress on the players makes it unlikely.

Additionally, World Cup bracket stage matches in 1998 and 2002 were decided by the “Golden Goal,” where the first team to score wins. This format was abandoned after it was decided teams were too cautious to attack knowing one mistake on defense would end the game.

While we’re not quite sure if that counts as a World Cup bracket, at least there was an official final, unlike in 1950. It should be noted that FIFA introduced the penalty kick shootout in the 1978 World Cup knockout-round matches, though neither game that year required the new feature.

7. The First World Cup Bracket Match Decided On PKs Was In 1982

As mentioned above, FIFA didn’t institute PKs at the World Cup until 1978. However, because there were only two matches eligible for the shootout, it wasn’t until 1982 that a World Cup match was decided on penalties.

The first World Cup shootout was a semifinal match between France and Germany on July 8, 1982. Germany won 5-4 to advance to the final, where it lost to Italy. The 1982 tournament also featured two group stages but the second stage split into four groups of three, with the winner advancing to the semifinals of the knockout stage. It was a weird format and was immediately abandoned.

With the exception of the 1934 and 1938 World Cups, in which the entire tournament was a knockout round, the first time the World Cup featured 16 teams in the bracket was in 1986. That also happens to be the last time Mexico made it to the quarterfinals.

From 1986 to 1994, this format was used where 24 teams were paired down to 16 for the knockout stage, with the four best third-place teams moving on from the six groups of four.

Not until 1998, 20 years ago, did FIFA begin using the World Cup bracket that is currently in use. That year, FIFA increased the teams from 24 to 32, creating eight groups of four funneling into a Round of 16 World Cup bracket.

10. The Current World Cup Bracket Is Set Up To Prevent Group Opponents From Seeing Each Other Again

The way the World Cup bracket is currently set up, the only way group opponents can face each other a second time in the tournament is by facing off in the final.

There has been one exception to this rule since 1998. In 2002 the World Cup bracket was set up to ensure co-hosts Japan and South Korea would end up playing on home soil until the final/third-place match. This meant the half of the bracket teams were placed in was determined by the starting group. 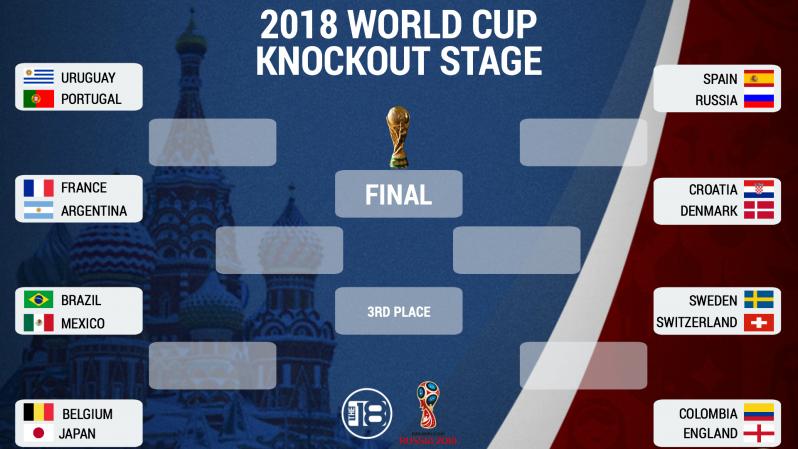